Release date TBC on Xbox One and PC

Below is a roguelike action-adventure, in the mould of the Souls series, with crafting, permadeath and a beautiful art style, too.  It was first announced at E3 five years ago, Below disappeared for quite some time thereafter. It’s now resurfaced and is finally playable.

My first  impression are of something that’s a bit like the wonderful Titan Souls, if it were a full-blown RPG with smaller enemies rather than just a boss-run experience. This picture only became clear once I’d finished the 40-odd minutes of play on offer.

This is because Below does very little to endear itself to the player. From the get go it’s shrouded in mystery, buried deep in complexity and challenge – it’s almost a stroppy teenager of a video game. But this is what got me utterly engrossed by it.

I knew nothing about Below when I started a new game, and somehow knew even less five minutes in. It’s a game that explains nothing, not even the controls; you learn by doing, experiencing, and eventually, dying. You start by arriving in a boat on a beach, and simply have to move up the shore and find your way. 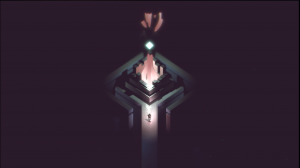 After I’d climbed up the rockface, finding what to do next was a case of wandering around the grassy plain and seeing what was around.

Between four pillars was a glowing crystal. After running hopelessly around it for 30 seconds, the game finally, almost unwillingly, told me to press LB to pick it up. The crystal then suddenly became very important, activating an egg-timer-shaped symbol with a diamond at its centre in the upper-left of the screen – this item now opened doors to caves and dungeons. Again, it took me some time to find the first dungeon on the far right of this space, but once I did, this weird key granted access.

The camera is far away from your nameless hero, again much like Titan Souls, to create a grand sense of scale. It also presents an isometric perspective, which lends itself really well to the combat and finding your way around.

This helpful viewpoint juxtaposes the fact that the whole terrain is shrouded in darkness and mist, which you must clear. This can be achieved either by using the light of your shield, which only allows you to see a very small distance ahead; lighting campfires and torches along your journey; or using the mysterious crystal collected early on to light the path. 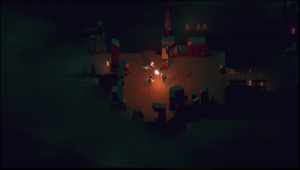 In the first cave, the name of the game comes into play: you must move from room to room descending further into the dungeon, surviving as long as you can and hopefully finding whatever lurks inside. Each room houses small, red, diamond-shaped enemies. The best way to describe them is as angry red crystals, almost like something from Geometry Wars. Your character is equipped with a sword and shield, and mastering effective use of both is essential if you’re to stand any chance of making decent progress.

Enemies only take one hit to perish before they turn white, after which you can collect them. This forms the currency of your egg-timer light (it only becomes a currency once you enter a cave). It either ticks down when you use it as a light, or when you rest at a campfire, you can spend 25 crystals to turn the campfire blue.

Every time you die in Below, you return to the point you’re stepping onto the shore from the boat. There are no bonfires as there are in Dark Souls; there isn’t a modicum of a safety net. This game kicks you when you’re down. Again, it almost feels like it’s reluctant to have you playing. 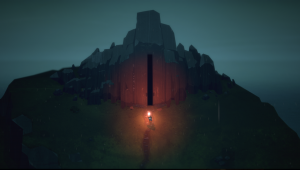 There’s also your character’s hunger and thirst to monitor, just for good measure. You can collect food along the way, which can be cooked at the campfires to offer greater health and hunger recovery. Eating the raw ingredients offers an almost spiteful level of boost. When struck by enemies, your character also appears to bleed, represented by a red indicator in the upper right of your character’s health bar. It appears you can cauterise the wound at fires, too, to limit the health loss.

But there’s an addictive quality to Below: each time I died, and watched that boat arrive on that beach, I felt determined to make it further than I did the time before. Armed with the knowledge of my prior failings, learning from my mistakes, and ready to start all over again.

Like Dark Souls, when you head back through the dungeon you have to recover the items from your previous dead body. It feels more akin to Infinity Blade, as if a descendant from the bloodline is arriving and looking to improve upon their family’s efforts, as each new arrival looks ever-so-slightly different. But again, with no name for each character, and the camera so far away, it’s hard to attach any real identity to each hero, beyond their voice each time they’re struck and wail in pain.

Despite Below’s best efforts to put me off, I’m already addicted. It scratches a very particular itch that Titan Souls, Rogue Legacy and Dark Souls have done before it.

I’ve come away with more questions than answers, but am most certainly eager to find out everything there is to know about the game – including the reason the campfires turn blue.