Intel’s wireless display (WiDi) technology is not new. It was first announced in January at CES 2010, but it took a full 18 months for the first products to hit the market. Hindering things further WiDi was only compatible with Intel’s latest Sandy Bridge chipset leaving the vast majority of PCs incompatible. Fast forward to an Ultrabook laden 2012 however and WiDi is suddenly worth revisiting.

Where the Belkin ScreenCast comes in is as a conduit. WiDi compatible laptops may not be mainstream, but with the first WiDi integrated TVs still to arrive (LG will be first in mid 2012) the ScreenCast works as an adaptor to make WiDi compatible with any existing television. It sounds like a simple role, but the elegance with which Belkin has carried it off deserves great credit. 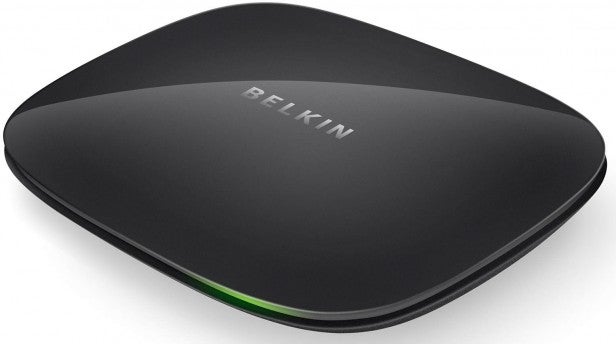 Open the ScreenCast and the first surprise is how small it is. Belkin has created a device which is little larger than a paperback novel and roughly the same weight. Despite this the ScreenCast has all the connections needed: power, an HDMI port and RCA for those further behind the technological curve. The front right of the ScreenCast glows orange when in standby and turns green when on and the tasteful black finish matches well with the ongoing fad for piano black AV equipment. Interestingly the Screencast doesn’t need a remote control because it automatically switches between on and standby when the correct TV input is selected and all other control comes directly from the PC streaming the content.

Setup is a breeze. The ScreenCast plugs into a wall socket for power and Belkin supplies an HDMI (though not RCA) cable. Connect it to your TV, switch the TV to the correct input and the ScreenCast begins a one-off initialisation followed by the prompt message: ‘Ready for connection. To get started launch Intel WiDi on your computer’.  Compatible PCs should already have the WiDi software pre-installed, otherwise it can be downloaded here.

Once the software is started it scans for WiDi adaptors and finds the ScreenCast, which then displays a four digit security code that you enter into the WiDi PC software. Again this is a one-off and from this point onwards connection to the ScreenCast can be set to automatic whenever in range or simply by clicking ‘Connect’ when the WiDi software is launched. A nice touch is WiDi remembers your last screen setup (whether it be for the TV to mirror your display or extend it) so it really does become a near instant connection. 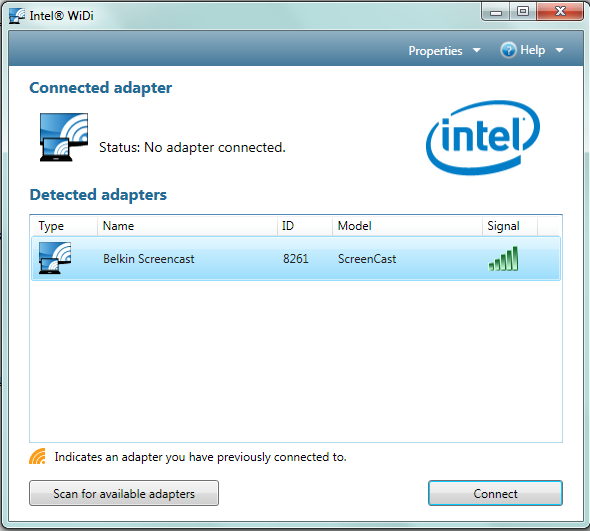 Simple as the ScreenCast may be this counts for nothing without strong performance and in this regard it does come through, albeit with caveats. The first – drivers. The ScreenCast is easy to get working (in real time it should take little more than a minute), but you will immediately find yourself faffing with software updates.

Why? The changes Intel has made to WiDi since its original release have been significant and as such anything but the latest drivers results in a substandard experience with the Belkin ScreenCast.

At the time of writing the current version of WiDi is 3.0.13.0, which adds support for WiDi built directly into TVs while the previous edition brought H.264 hardware encoding for smoother playback and lower latency. One release before that introduced support for 1080p video, HDCP 2.0 copy protection and Surround Sound. The version of WiDi software we found pre-installed on our Ultrabook lacked any of this functionality. Needless to say you’ll need the latest Intel HD graphics driver as well (version 15.22.xx or later) to make this all come together.

Once this was done we still found the wireless image sent to our TV to be gaudy with oversaturated colours, needing calibration. WiDi is easy to setup, but to get it performing optimally takes a little more elbow grease.

The good news is jump through these hoops and WiDi lives up to its promise. Given it relies on Wi-Fi, it has the same distance limitations. But since you will use your laptop as the remote control it will be in the same room as your ScreenCast, making this a non-issue.

Intel’s insistence on a Sandy Bridge chip for WiDi is partly because it has copy protection built-in at a chip level, but equally important is it ensures a minimum level of performance and this will see both 720p and 1080p content run smoothly. Audio also does what’s said on the tin, outputting in 5.1 Surround Sound should the source content have it and connection to the ScreenCast automatically switches the audio output from the laptop to the TV.

Ultimately then what we have is a product that (after a few software updates) does exactly as it claims and once setup achieves it with the very minimum of fuss. So why can’t we give it an unreserved recommendation?

In short: price. As it stands the ScreenCast retails for a hefty £89.99 and for £30 to £40 more you could buy a cheap nettop PC. For those determined to use their laptops equally they could simply keep a spare HDMI cable, connect to the TV for an entirely setup free wired connection and buy a wireless mouse for under £15. This method would also keep the fan noise of a whirring PC away from you during viewing.

”’Verdict”’
The Belkin ScreenCast is a difficult product to rate. Drivers should really update automatically, but ultimately it is easy to use, streams HD video reliably and is a simple way to wirelessly extend your desktop to any TV… provided you have any Sandy Bridge laptop. That said the role of the ScreenCast is essentially little more than a dongle and what convenience it adds is compromised by a near three figure asking price. If you are prepared to accept the costs you won’t be disappointed, but should WiDi continue to gather momentum we can see such devices quickly becoming commodity items and eventually – as Intel strikes TV deals – potentially unnecessary.