Belkin’s sleek little Network USB Hub is rather special in that it enables you to share virtually any type of USB device over the network with multiple PCs. No more unplugging them and swapping them to another system as they can be kept in a central hub and access handed out as required. The hub adheres to Belkin’s design philosophy so its polished black casing will fit in neatly with its latest wireless routers. The casing is less than 2cms thick but it’s built well enough and packs in five USB 2.0 ports and a Fast Ethernet port whilst power is provided by a small external supply.


Each PC requires a Control Center utility installed, which only takes few seconds. It’ll automatically add an exception to the Windows Firewall and also offers a choice of manually or automatically connecting to USB devices as they’re plugged in. It runs permanently in the background and loads a quick access icon in the System Tray. 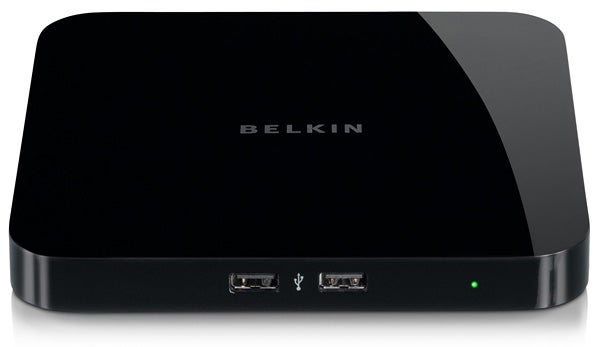 The Control Center opens with a view of all devices currently plugged in to the hub. For each one you get a device name and basic description and it’ll tell you, where applicable, which system they are connected to. If you went for the manual option you just pick the device you want to access and select the Connect option from the drop-down menu. Obviously, you can’t share USB devices so if one is in use you can send a request for access to the system currently using it. This action pops up a requester window on their system where they can either disconnect from it or deny access and continue using it.


The Settings menu provides plenty of user options as you can have the Control Center load when Windows starts and have the interface displayed automatically. The utility regularly polls the hub to update itself and you can set a refresh rate in seconds. It can also notify you if a connection with a device is lost and remind you that devices should not be in use when disconnected.


You can have multiple hubs placed around the network and they can all be accessed from the same Control Center. The hub runs a basic Linux kernel offering a simple password protected web interface that opens with a status display of connected devices. Network settings are accessed from here and you can go for DHCP or a fixed IP address and fiddle with the network interface settings. The properties of each USB device can be viewed and you can see which hub it’s connected to plus the device’s name and its rated speed. Connections can be managed individually as you can opt to automatically connect and ask the Control Center to attempt to re-establish contact if a link is lost.

For testing we linked the hub to a Belkin N1 Vision wireless broadband router and used Boston Supermicro PCs loaded with Windows XP SP2 and Vista Ultimate. The wireless connection was tested with a Fujitsu-Siemens notebook running XP SP2 and equipped with a TRENDnet 802.11n PC Card. In practice we found the hub very simple to manage and use. To check standard storage devices we used a Buffalo FireStix, an unbranded 1GB memory stick and a Maxtor OneTouch desktop drive. As soon as they were plugged in the Control Center on each system immediately recognised them and made them ready for use. We also tested using a Hewlett Packard DAT 160 external USB tape drive and Epson Stylus 950 ink-jet printer and had no problems with these either. We liked the fact that as the PC continued to believe it had a local USB connection to the printer, the Epson ink monitoring utilities continued to work normally. 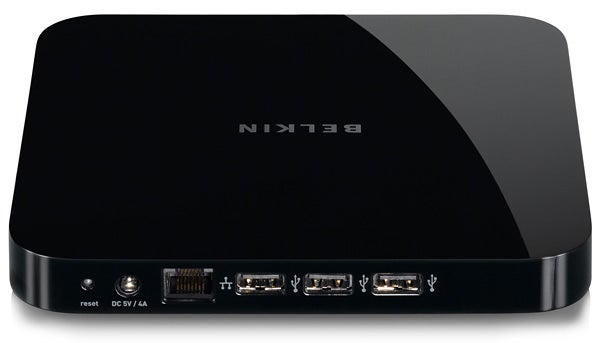 That’s the good news but there is bad news which centres purely on performance. To get some comparative data we plugged each storage device directly into a 3.2GHz Pentium D PC and ran a range of file copies and backups. The best speeds came from the FireStix and Maxtor storage devices where we saw respective read speeds of 28MB/sec and 24.6MB/sec. We used EMC’s Retrospect for the tape drive and a backup of 12GB of test data reported 5.8MB/sec write speeds. We then connected each device to the hub and reran the same tests. The FireStix and Maxtor devices now returned speeds of only 3.1MB/sec and 2.9MB/sec whilst tape drive performance dropped to 3.9MB/sec.


The bottleneck is not the network but the hub itself as its USB 2.0 ports only seemed to be capable of delivering USB 1.1 speeds. Basically, no matter what you have connected the maximum available bandwidth for all users is less than 4MB/sec. We demonstrated this by running the freely available Iometer on one system connected to the FireStix where it returned a 3.2MB/sec raw read rate. We then fired up Iometer on a second PC accessing the Maxtor drive and throughput settled down to a cumulative 3.7MB/sec for both systems.


Belkin delivers a simple solution for sharing your USB devices over the network. It’s extremely easy to use with good management and monitoring tools but overall performance for USB storage devices is a disappointment.

(centre)”’To use the hub you need to load Belkin’s Control Center utility.”’(/centre)

(centre)”’The hub also has its own web interface from where you can configure network settings.”’(/centre)

(centre)”’Multiple hubs can be managed from one Control Center interface.”’(/centre)

(centre)”’Request access to a device already in use causes this window to pop up.”’(/centre)

(centre)”’Control Center provides plenty of information about connected devices and who is using them.”’(/centre)