Belkin was one of the first networking vendors to deliver a router that supported the draft 802.11n wireless standard and yet it’s only now that it has launched a version that incorporates an ADSL modem. If it’s style you’re after then the N1 Wireless Modem Router has what it takes, as this sleek slab of plastic has a highly polished black top panel. Its row of bright blue status indicators have a lot more to say than the average wireless router.


The triplet of non-removable aerials indicates MIMO is in action for wireless operations but there’s not much to see at the back, though, as you have the standard set of four switched Fast Ethernet ports, an ADSL 2/2+ modem port and a unit reset button. Belkin is so proud of the router’s status indicators that it has submitted a patent for them. Instead of boring little dots you get a backlit graphic for each function which shows clearly what the router is doing. When you apply power the icons flash to show progress of the boot-up phase and modem connection status and if any problems are detected the relevant icon turns orange. 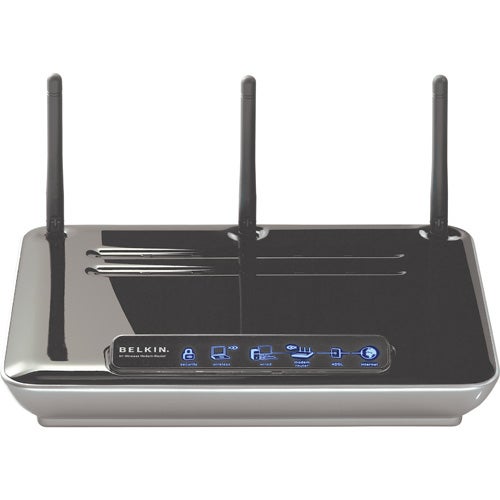 Belkin’s installation routine veers from the norm so don’t try and plug it in and access it immediately with a web browser as you won’t get anywhere. You need to run the CD-ROM based setup utility first which will search for the router and request your ISP details, set up the wireless access point and reboot the unit ready for use. This process changes the router’s default IP address to the one listed in the manual and sets up the DHCP server to provide addresses in the same range. The setup routine only take few minutes to run after which you can then access the web browser management interface.


It soon becomes apparent that despite the above average price the router is a little short on features. You get the standard NAT/SPI firewall, which you can enable or disable for whatever reason and create up to twenty virtual server entries for routing certain inbound traffic to specific systems identified by their IP address. A single system can be placed in a DMZ where it circumvents the firewall and you can stop the WAN port responding to Pings from the Internet. The client IP filter feature could be useful as it enables you to designate ranges of IP addresses on the LAN and restrict access to the Internet or particular services permanently or to a basic schedule.

Wireless security comprises 64/128-bit WEP plus WPA/WPA2 with a pre-shared key or via a RADIUS server and we would recommend activating one of these immediately although you can disable the access point if you wish. Usefully, you get one status indicator that lights up to show if clients are connected to the access point and another alongside that only illuminates if a security scheme is operational. Further basic security is provided with SSID masking and a MAC address list where you can allow or deny listed clients to connect wirelessly.


You can opt to allow the access point to support 802.11n, g and b operations and for the former select a single 20MHz channel or allow a pair to be bonded for the full 40MHz experience. As we’ve seen with a number of draft 802.11n wireless products it’s important to have the latest firmware loaded and the router can check Belkin’s web site to see if any new versions are available.


For wireless performance testing we installed Belkin’s N1 Wireless Notebook Card in a 1.6GHz Fujitsu Siemens notebook running Windows XP SP2. The bundled utility provides a tidy status screen from where you can view available networks and set up different profiles. Unlike Netgear and Buffalo, you don’t get a lot of help when setting up a connection but the profiles are easy enough to create. 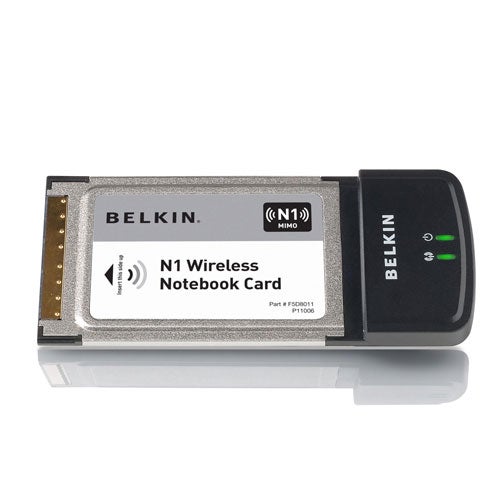 Wireless speeds aren’t overly impressive as the open source Iometer reported a raw read rate of 68Mbps over a close range open link with a Supermicro Pentium D 3.2GHz PC on the LAN. We also noticed during this test that the laptop’s CPU utilisation was hovering around the 60 per cent mark. Real world test results weren’t too good either with our 690MB video file copied from the laptop to the PC in 108 seconds for an average of 51Mbps.


When compared with Netgear’s Gigabit equipped RangeMax WNR854T the Belkin router is around 25 per cent slower for draft 802.11n operations. Moving the laptop to the floor below and placing a couple of brick walls in the way also saw signal strength drop by over fifty per cent and raw performance slump to around 38Mbps over an open link.


Pricewise, the N1 Wireless Modem Router is in the same ball-park as similar products from the main competitors such as D-Link, Linksys and Netgear. However, although it is particularly easy to use and the new display panel will prove extremely handy it doesn’t stack up with the rest in terms of features or general wireless performance. If you want the best draft 802.11n speeds and range plus an integral ADSL modem then check out Netgear’s DG834N.

Make sure you run the CD-based setup utility as it’ll make router installation a lot easier.

You can create filters to block certain PCs or groups of users from accessing specific services using port ranges.

Belkin offers a good range of wireless security options although we did find WPA2 can hit performance. 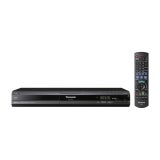 It’s important to keep the firmware up to date and the router can check Belkin’s web site for you.