When Belkin launched its glossy black Vision broadband routers it set a design standard that much of the competition followed as black was suddenly very much in vogue. Its latest N+ Wireless Modem Router, the F5D8635UK4A, keeps to the same colour scheme but goes all matte on us and loses the distinctive LCD display panel as well.


At the rear you have four Ethernet LAN ports but unlike the N+ Wireless Router model these are not the Gigabit variety. The N+ incorporates an ADSL modem and you also get a Draft 2.0 compliant 802.11n single band wireless access point. The USB port adds some useful storage related features as you can connect a memory stick or an external storage device and share its contents over the network.

There are still plenty of visual cues to operations as the router has a strip of bright blue icons running up the front panel that show the status of the ADSL link, the Internet connection, the attached storage device, WLAN, wireless security and LAN ports. Errors or problems with any component are highlighted by the relevant icon turning amber.


Note that only one indicator is provided for the Ethernet switch so you can’t see which ports have devices attached to them. At the top is a speedometer made up of five LEDs that shows the current download speed relative to the fastest speed the router has measured since activation. 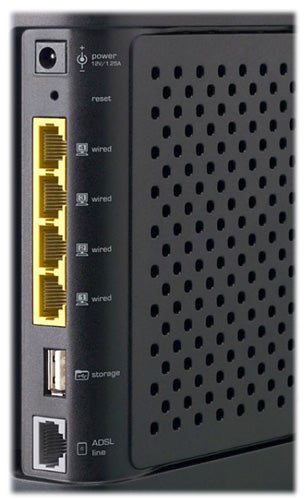 Belkin takes ease of installation very seriously so the CD-ROM has a handy Setup Assistant utility that steps through setting the N+ up and getting you on-line with the minimum of fuss. Belkin also gets a pat on the back for its Security Assistant which guides you through configuring essential wireless security. The router had no problems with our BT Business Broadband connection and we were up and away in a few minutes.


The web interface is pretty much the same as offered by Belkin’s N1 Vision products and is consequently easy enough to navigate. Usefully, you can elect to have the router automatically check Belkin’s website for firmware upgrades when you login and advise you if any new updates are available. It won’t be much but you can also do your bit for the environment as the Eco mode can be used to set up daily schedules that will turn the wireless access point off and on and dim the status icons.

The NAT/SPI firewall can no longer be disabled although why you’d want to do this is anyone’s guess. Virtual servers are used to route inbound traffic to specific servers based on port ranges and you have 20 entries available. A single DMZ (demilitarised zone) entry allows one LAN system to step away from the firewall whilst access controls are used to specify selected systems and limit their access to services such as web browsing and email. You can also apply lists of 12 URLs and keyword blocks and use schedules to define when they are active.


For wireless access the N+ supports two SSIDs with one for normal use where clients have access to systems on the LAN and the Internet. The second is for guests where they can only access the Internet and not other systems on the LAN. Two access options are provided as you can implement WPA/WPA2 encryption or use the Hotel-Style feature which redirects the wireless client to a web page where they need to enter a password. Wi-Fi Protected Setup (WPS) is also available with support for PIN and Push Button Setup (PBS) methods. 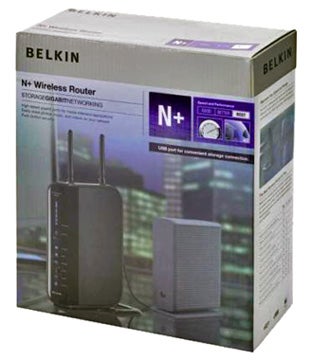 The shared storage feature isn’t anywhere near as good as that offered by Linksys’ WRT610N although this dual-band router does cost twice as much as the N+. Belkin doesn’t provide any configuration options in the web interface so you can’t apply your own workgroup name, set up access restrictions or provide FTP services.


All you do is install the Storage Manager utility on each PC and when a USB device is plugged in to the router it automatically maps it to a drive letter for you and offers the option to dismount it as well. The router also appears in the Windows Network Places under the ‘Belkin’ workgroup so you can select your own drive letter for mapping if you wish.


Storage performance is pedestrian at best as we found copying a 690MB video clip between a LAN client and a 300GB Maxtor USB desktop drive yielded a very modest 2.5-3MB/sec. Wireless speeds are in the same ball park as much of the competition and to test these we used a Belkin N+ USB adapter connected to our test laptop. Copying the same file over a close range WPA2 encrypted link returned average speeds of 56Mbps and moving the laptop to the floor below the router saw speeds drop by around 35 per cent so there’s nothing radical here.


The Belkin N+ Wireless Modem Router (F5D8635UK4A) is offering a reasonable level of features for the price which includes support for dual wireless SSIDs and a good range of access controls for client systems. However, it could do with Gigabit ports and although the shared storage feature is quite useful it has its limitations and performance is poor. 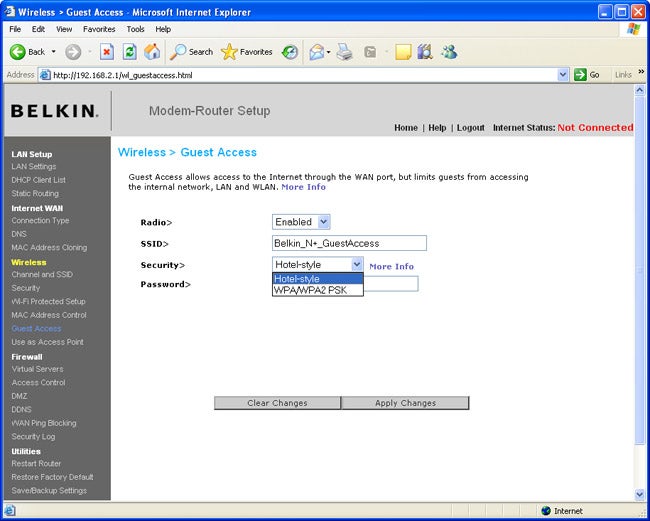 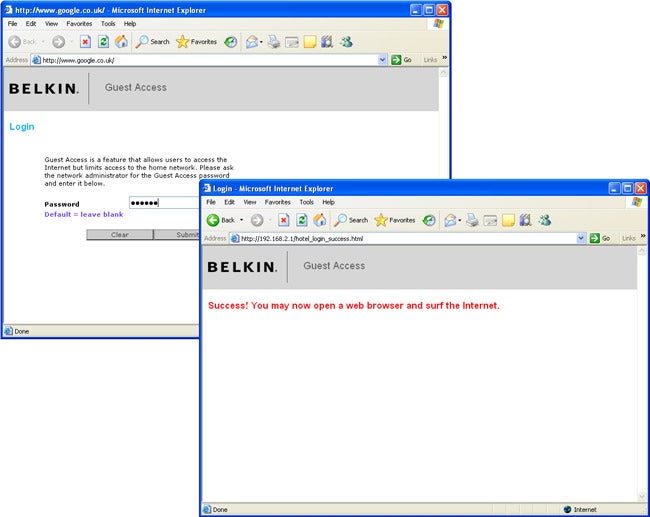 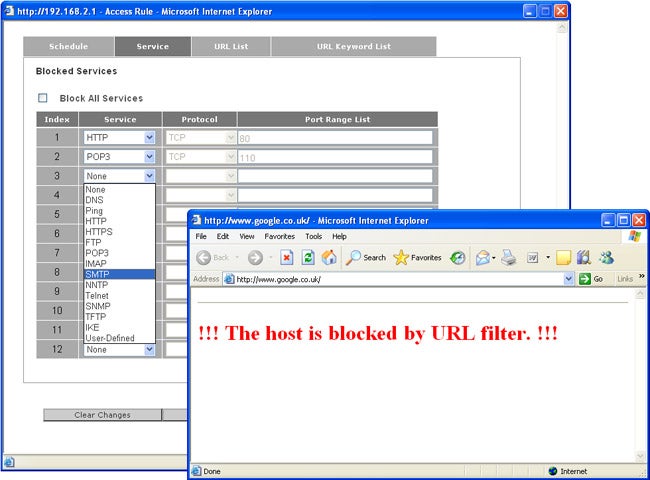 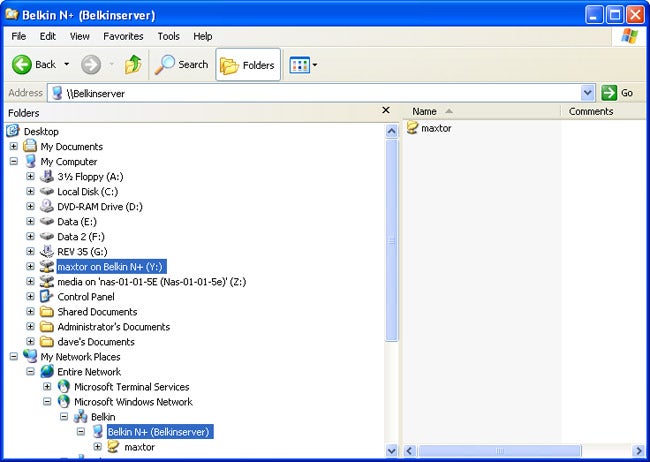 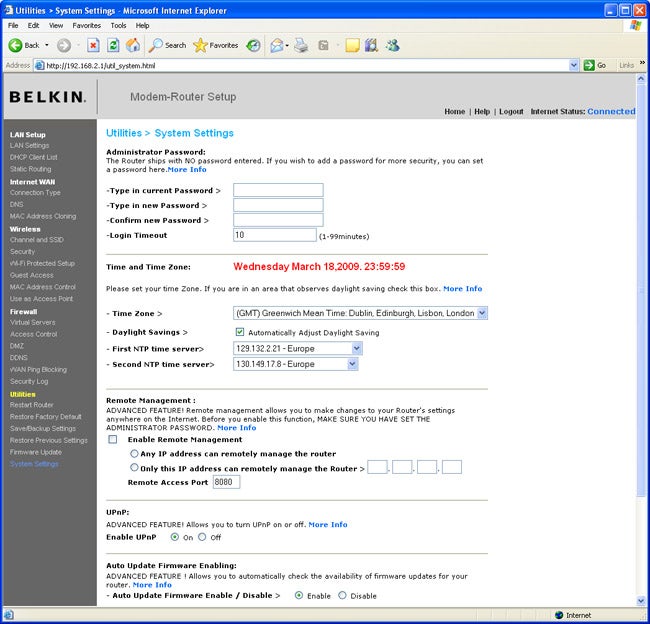