Hollywood has long relied on actors that are vertically challenged to inject a touch of comedy. If you’re short, you’re funny seems to be the message. It’s a situation that’s been uncannily reflected in the laptop industry over the years. Small devices such as the Toshiba Libretto and the Psion NetBook Pro have played the part of mildly interesting – occasionally laughable – sidekick, with the real business being carried on by the big boys and their much more powerful machines.


Now, it seems, the tide is turning. Small laptops and ultramobile PCs such as Sony’s UX1XN and OQO’s Model 02 and, more recently, the incredibly cheap, portable and usable Asus Eee PC are becoming commonplace. More recently, we’ve seen Vye’s tablet-style mini-v S37, and now we have Belinea’s gambit – the s.book 1. 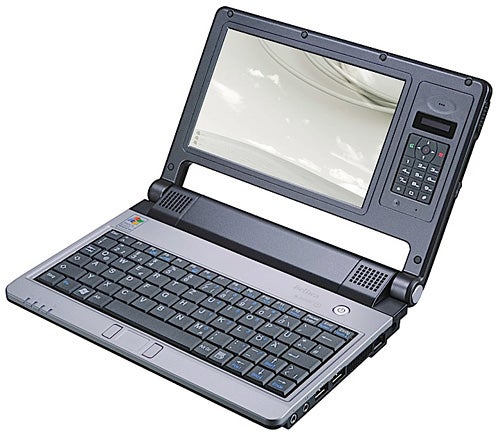 It’s certainly small and light, and compares favourably with the very smallest of machines on the market right now. With the lid closed it’s barely bigger than a large format paperback book at 230 x 171mm and it’s pretty slim too, standing a hardly-substantial 29.4mm proud of a desk.


The weight is as inconsequential as the s.book’s dimensions. It’s a mere 1.1kg, including the 2,200mAh lithium ion battery, and it all adds up to a laptop that’s as easy to sling into a handbag as it is a briefcase or rucksack. This is an ultraportable in every sense of the word, and the inclusion of a luxuriously soft leather case, which comes as standard in the box, is the icing on the cake.

Before I go any further, however, I’m going to point out that looks aren’t the s.book’s strong suit. If your preference is for Sony VAIOs and you secretly harbour the desire to own a MacBook Air (shame on you) then this dainty machine will not be for you.


The lid may be glossy but the graphics adorning it are dull, and once you open the lid the plain-Jane silver surrounding the keyboard does nothing to stir the blood. It’s solidly built, though. I particularly liked the thick plastic protecting the 7in screen, the sturdy hinge and the four rubber nipples which provide a degree of shock protection against over-enthusiastic lid-slammers.


Around the edges are some surprises: there’s a full-sized standard DVI port on the left, next to an SD card reader, while on the right edge are an Ethernet port, two USB sockets plus 3.5mm headphone and microphone sockets. Though notably there’s no optical drive as there is on the Vye mini-v S37.

These thoughtful design touches, alas, do not extend throughout the s.book’s chassis. The TFT panel, for instance, is a bit of a disappointment. Though it is a touch-sensitive one (there’s a stylus stowed in the top left corner), at 7in in diagonal it doesn’t take full advantage of the full width of the s.book’s chassis, and the resolution is a mere 800 x 480 pixels.


As a result it feels cramped to use, particularly when browsing the web, and I found myself constantly panning and scrolling about, even on simple web pages. It’s also a little grainy – text isn’t as crisp as it is on the best TFT panels – though viewing angles and brightness are both excellent. 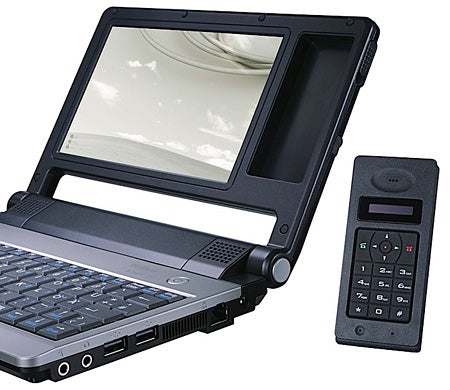 The reason the screen occupies just three quarters of the lid is that the final portion is dedicated to, bizarrely enough, a Bluetooth Skype phone. Personally I’d rather have a larger screen – you can always buy a USB Skype phone for out-and-about use if you desperately want one – or even use your own Bluetooth headset. It’s a waste that’s made especially galling by the fact that it doesn’t even work that well, with audio breaking up constantly and awkward navigation of contacts on the phone.


Below the screen, the keyboard continues the slightly disappointing theme. It’s small, but generally pretty easy to type on – though you do have to practice a bit before you can get up a serious head of steam. But it’s hamstrung by poor layout. Its worst crime is that there’s no right Shift key, and this isn’t helped by a tiny Tab key, a shrunken comma and a backspace key that could be larger.


The keyboard is accompanied by possibly the smallest touchpad I’ve ever seen – so small it looks like it belongs on a laptop belonging to Barbie or Ken instead of a self-respecting business person. To my surprise it worked remarkably well. You have to swipe your finger across it more than once to get the cursor from one side of the screen to the other, but it doesn’t jump around or respond erratically. The buttons flanking it are finger-friendly too.


Its major flaw isn’t its small size, accuracy or sensitivity, though – it’s the placement that irritates: it’s in the direct centre of what on other laptops would be the palm rest. This means it’s easy to brush against while typing, relocating the cursor frustratingly elsewhere in your document.

More practical is the s.book’s storage: it’s surprisingly generous with an 80GB hard disk inside. Thanks to the choice of Windows XP Professional instead of Vista, there’s almost 70GB available to play around with out of the box. The s.book is also well equipped with the aforementioned Bluetooth complemented by 802.11b/g Wi-Fi.


The combination of a 1.2GHz ultra-low voltage VIA C7-M processor, 1GB of RAM and integrated graphics doesn’t feel that responsive, though. It’ll cope with most office operations without breaking sweat, but open up more than one or two applications at once and the s.book begins to slow down. The Vye S37 I looked at a couple of weeks ago was much lighter on its feet than this. 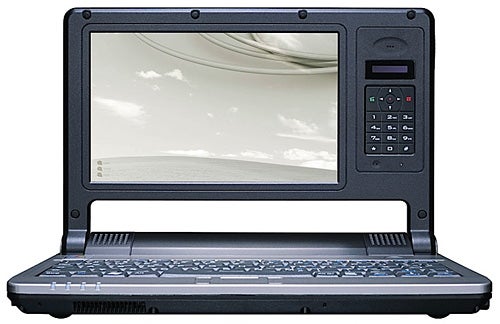 A bigger disappointment than this, however, was that despite the sluggish performance, there was no payback in terms of battery life. The marketing materials for the s.book claim three hours, but in light use tests with the screen forced on at medium brightness and the maximum battery profile switched on I could only get 2hrs 34mins of work out of it before it needed a recharge.


It would be churlish to completely write off the Belinea s.book 1 completely, especially given that its price – a mere £418 – is low for a laptop of any size, especially an ultraportable this small.


If you really want a laptop this small and need the flexibility of full Windows and more storage than the sub-£300 Eee PC can offer, it’s a reasonable option. But I just can’t shake my niggling doubts. It’s just a little bit too fiddly to use, the screen is just a little too cramped and the battery life a touch too short to warrant a wholehearted recommendation.