The Beko TAM6202 is a compact and affordable two-slice toaster.

The design is plasticky but pretty good looking for a budget toaster, although its toasting is just too uneven. 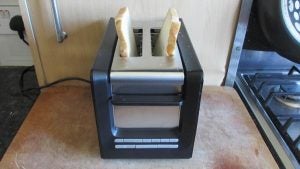 I like the Beko’s compact design. It’s small and glossy, if a bit plasticky. The controls are on one of the short sides, so this is best as the front but you could position it widthways on the worktop if you prefer – it would just be harder to see the controls.

The digital controls include buttons for browning level, from 1 to 7, and three buttons: cancel, defrost and reheat. There’s no bagel setting for toasting on one side. 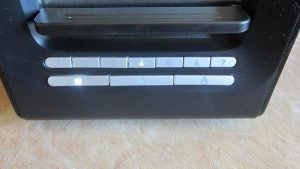 The Beko comes with a solidly built warming rack that sits well on the top but doesn’t fold up when not in use, so it will take up a bit of your precious cupboard space.

Cable length is good at 90cm, but that’s measured from the end with the controls on. From the back you get 70-80cm. There’s cable management underneath to store any excess. 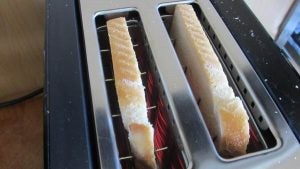 I toasted one slice of white bread vertically and one horizontally to test evenness, on a middling browning setting of 4. The slot was only just long enough to take the horizontal slice. When the toast pops up it jumps a little. Old fashioned and fun

The cycle took 2 minutes 5 seconds, so fairly quick, but the results were terribly uneven. Despite fitting in the slot, the top 3cm of the horizontally toasted bread was soft and white, meanwhile the bottom was overdone. 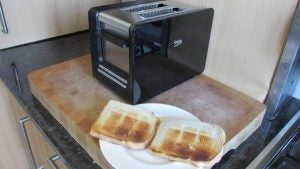 The slots are 3cm wide, narrow to less than 1cm when squeezing to hold your toastables. I found crumpets needed a browning setting of 6 and came out more evenly cooked than the toast, because they sit in the middle of the slots and it’s the ends of the slots that are most problematic. 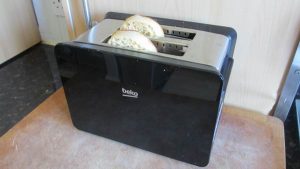 You don’t push the lever up to lift; the toast just naturally sits high in the slot. It sticks up by a good 5cm, enough to grab even small toastables.

The warming rack that you can sit on top of the toaster is pleasantly sturdy but doesn’t fold up for storage. It’s big enough for one large or two small pastries. 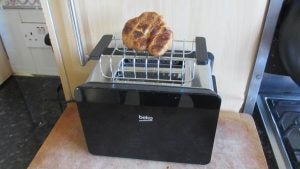 I turned toaster up to 7 to warm the underside of a croissant, but that overdid it, so I flipped over and warmed the top on 4. Even this was too much. The Beko warms pastries fast. I hit stop when some crumbs from the croissant fell into the slot and started to smoke. The croissant was good for one heated on a toaster warming rack, but I still think an oven is better at the job.

Gloss black and brushed steel both gather fingerprints too easily, but build is solid, if plasticky. Its wide crumb tray is accessed from the end opposite the controls. 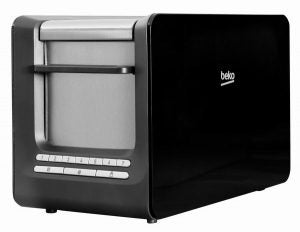 It’s better than many budget toasters. It’s affordable and a good size. Controls are nice and simple too. I just wish it cooked toast evenly.

The best two-slot toaster we’ve tested is the KitchenAid Artisan, but it’s very pricey. A good in-between option is the Sage A Bit More 2 Slice. And if you’re open to the idea of a four-slot toaster then the Dualit 4 Slot Lite or the Hotpoint TT 44E UP0 are our favourites, or maybe the Morphy Richards Rose Gold Toaster if you’re on a budget.

Small and affordable, this is better than many budget toasters, but toasting is too uneven.