Need a little more fridge space but don’t fancy splashing out for a whole new fridge freezer? Beko’s UL584APW is a slim-fit 55cm fridge with A+ energy rating, plenty of storage space and more shelves than Ikea… all for less that £180.

The little Beko doesn’t disappoint, combining excellent storage space with versatile shelving and plenty of door space. It only sips electricity compared to a full-sized fridge freezer and its cooling performance is nicely consistent, keeping your chilled food fresher for longer. Bargain! 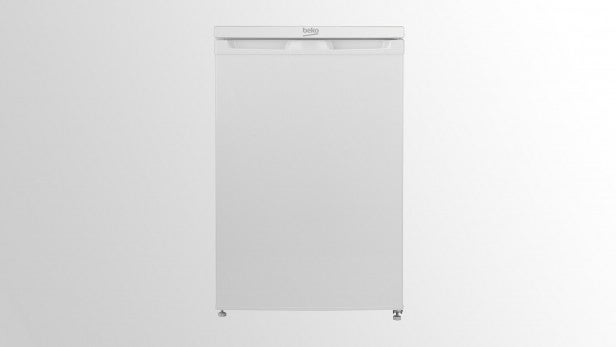 We haven’t tested too many under-counter refrigeration appliances, but there comes a time when everyone could do with a little more chilled storage space. Whether you have an under-counter fridge and freezer (rather than a fridge-freezer) and are looking for a fridge replacement, or simply could use some extra chiller space, under-counter fridges are relatively cheap to buy – but not always as affordable to run.

Beko aims to address this with the A+ energy rated UL584APW. This slim (55cm wide) under-counter fridge is finished in white or silver, has a neat bow-fronted door, and promises to cost less than £20 per year in electricity.

The door has two inset handles on the top and the hinges can be reversed so it can be made to open either way. It comes right-hand hinged as standard, and is fitted with an antibacterial door seal. This rubber-treatment technology aims to reduce or eliminate the unsightly growth of black mould that you can get in the folds of the door seal over time – especially if the appliance is kept somewhere damp such as an unheated utility room. 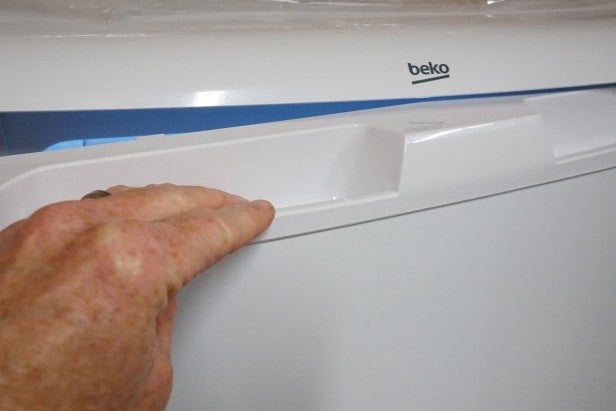 Beko suggests the UL584APW will only work effectively above 5oC ambient room temperature, so this model isn’t suitable for UK garages. Well, not in the mid-winter anyway. Mind you, if it’s less than 5oC in your garage, just turn the power off and open the fridge door.

The crisp white interior is lit with an equally crisp and white LED light. There’s only a single light and it’s positioned on the right, half way back in the compartment. Judicious placement of items on the mid-shelf will be required so as not to cast shadows over the rest of the fridge space.

There’s no small freezer box in this model, meaning even more space for chilled foods. It also allows Beko to introduce an auto-defrost feature. This keeps the rear cooling panel free from long-term ice build-up and negates the need for any manual defrosting.

Controls are straightforward, with a simple rotary thermostat marked 1 to 5: the 5 being colder than 1 in a reverse from actual temperature. That does make it something of a challenge to get the ideal 4oC average temperature on the mid-shelf unless you have an in-fridge thermometer. Alternatively, scroll down to the Performance section of this review and find out the settings you need. 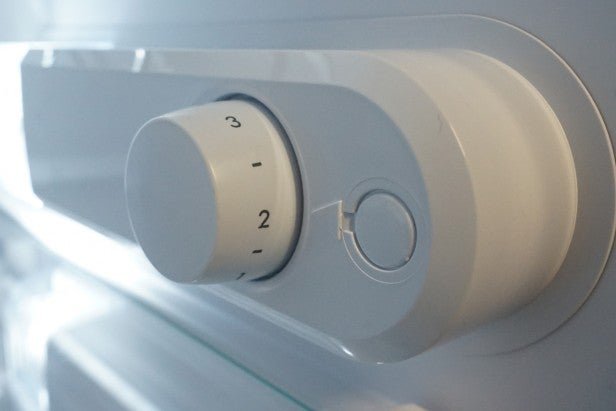 With no ice box to take up valuable cooling space, this Beko boasts a useful 130 litres of cooling capacity. That is excellent volume given its compact 55cm width and ability to slip under standard-height kitchen worktops.

The interior space boasts three full-depth shelf areas, one half-depth shelf allowing taller items to be stored on the shelf below, and a full-width salad drawer. In reality, this is way too many shelves. Unless you have lots of small items or a plethora of low, flat storage boxes to put in the fridge, you’ll almost certainly want to evict one of the shelves. Still, it’s nice to have the option.

The shelves are glass, so easy to clean, and the mid-shelves have a couple of placement options to adjust their height in the cabinet. Storage is further bolstered by a hanging chrome-wire bottle rack. Unusually, this is large enough to store 2-litre plastic bottles rather then just the more traditional wine-sized bottles. It, too, can be removed if it isn’t required – and, given the huge door pockets, it may not be. 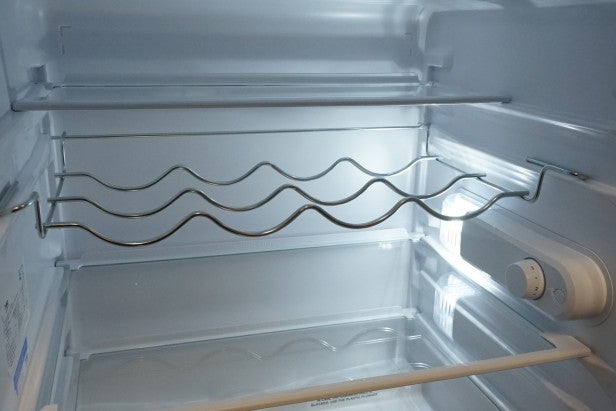 Below the lowest shelf is a clear plastic, full-width salad drawer. It’s a good size but its depth is truncated to allow for the fridge’s working components behind. Semi-sealed off from the main compartment, it should offer a consistent temperature for your fruit and veg.

The lowest of three door pockets is a deep, wide and tall container geared up for large milk bottles, cartons and 2-litre bottles. It’s a great size, there’s plenty of space above for tall bottles, and the pocket walls are high enough to stop bottles toppling out on vigorous door openings.

Two smaller door pockets are handy for smaller items such as jars and butter, and a removable egg-rack is supplied for half a dozen of a hen’s finest. There are no fancy specialist compartments, forced air cooling or fridge frippery with this Beko – just a good space with plenty of well-thought-out storage options. 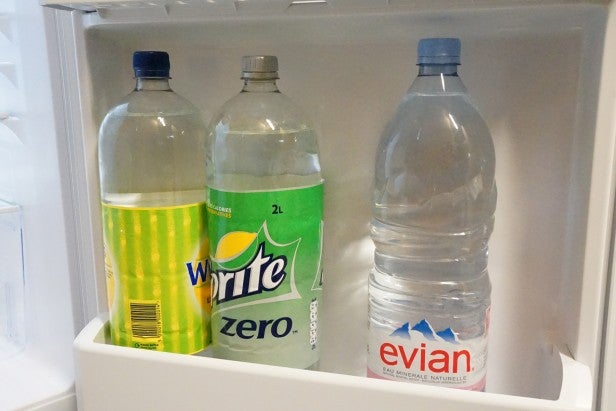 At the relatively affordable asking price of the UL584APW, one can’t expect high-tech motors or extra sound insulation to keep things super-hushed. Yet while you can certainly hear the Beko in action, it’s far from shouty compared to fridges from a decade ago.

We measured an average of just 41.5dB with the Beko’s compressor running. That’s pretty quiet, but a few decibels more than either the energy label (39dB) or Beko’s websites (40dB) would have you believe. While the best fridge-freezers we’ve tested will dip comfortably below 40dB, achieving under 42dB isn’t too bad given the price. 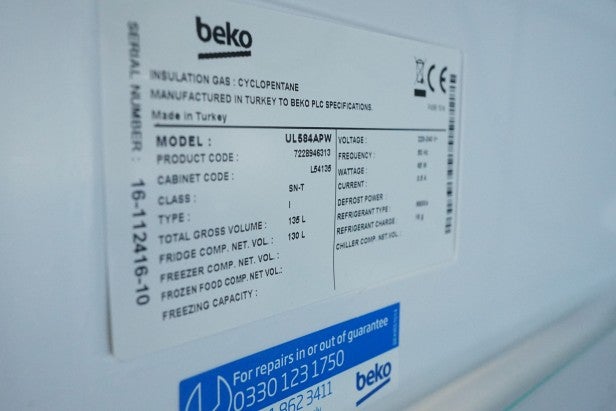 We loaded the UL584APW with 13kg (1kg/10 litres space) of fruit, vegetables, bottles and jars to replicate real-world loading. The fridge is housed in a temperature-controlled environment at 18 to 19oC to best replicate the average temperature of a UK kitchen (as opposed to a central European one – which is how the energy label figures are derived.)

We placed temperature probes on the top, middle and bottom shelves as well as in the salad drawer, and tracked the temperature of each probe, every minute for the week-long test. We spent 20-30 seconds six times a day having a rummage around with the door open.

By default we set the thermostat to position number 2, but following some measurement and fettling, we knocked that up to number 3 to give an average internal temperature of 4oC on the mid-shelf.

Given the affordable asking price, relatively thin walls (which often mean compromised insulation) and traditional compressor technology, we weren’t expecting great results. So it came as a pleasant surprise that the little Beko did a sterling job of chilling our food, keeping the temperature fairly tight from top to bottom and nicely consistent throughout its compressor cycle.

Having tweaked the thermostat, we achieved a perfect average of 4oC on the mid-shelf. That meant the bottle rack in the middle was running at 4.5oC and the very top shelf at 6oC average. All good. Better still, through the short compressor cycle, the upper shelves fluctuated by less than +/-1oC. A great result.

The lowest shelf (directly on top of the salad drawer) averaged 3.5oC and showed larger dips to just above freezing since it was closest to the fridge’s main cooling panel. This would be the ideal place to store meat and fish, but avoid putting fruit and veg here since getting that close to freezing might cause some frost damage.

The veggie drawer was predictably the most consistent of all areas, although its 5oC average is perhaps a degree or so higher than absolutely ideal for fruit and veg storage. Its consistent temperature, just +/- 0.5oC off average, is much more important for food longevity, though. So, overall, this Beko turns in a very good set of technical test results. 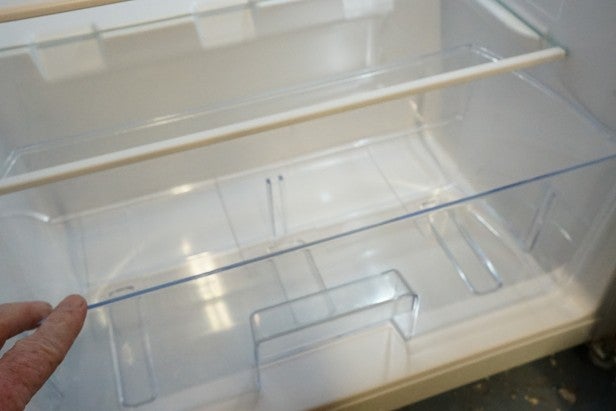 Note that during extended testing, we altered the room temperature to see how the Beko reacted. The average temperatures on all shelves drifted up and down with ambient room temperature (more advanced machines would remain constant), so it would be worth turning the stat up a little in the summer and down a bit for the winter. 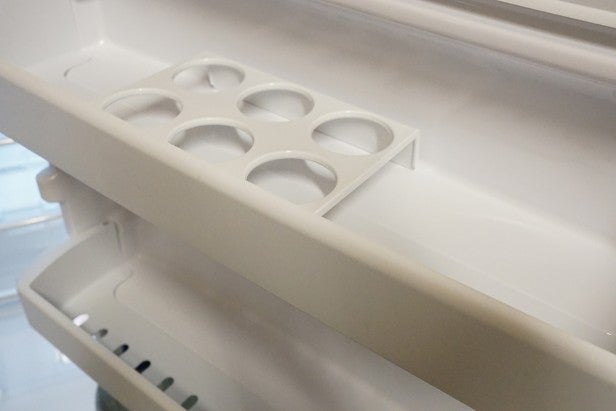 The UL584APW’s energy label suggests it will use about 116kW of electricity per year to run. Remember, though, that we said the energy label figures come from the fridge being measured in higher ambient kitchen temperatures of central Europe?

Well, after a week’s testing we reckon this Beko will actually use just shy of 100kW per annum in a UK kitchen with typical use. With the average price of electricity in the UK around 15p per kW, that’s less than £15 per year to run!

In hot and steamy kitchens, or for homes with larger families opening the door more frequently, that figure will creep up. Conversely, if you placed this fridge in a cool utility room then the running costs could be even lower.

As our neighbour noted, given the low asking price and very low running costs, if you have the space it’s worth buying the UL584APW as a ‘beer and back-up’ fridge. Chilled Peroni anyone? 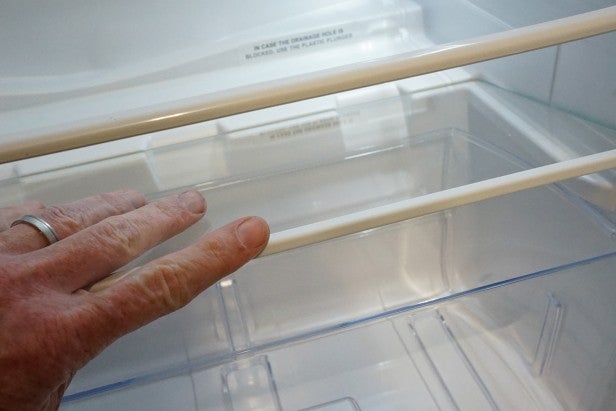 Should I buy the Beko UL584APW?

Beko’s UL584APW brings low running costs and capacious and flexible storage space to the usually utilitarian under-counter fridge market. Bright LED lighting, plenty of shelves, well-designed door storage and very good technical cooling performance make this slimline Beko something of a bargain. It’s frill-free and a little noisier than claimed, but with running costs of less than £15 a year, you can’t argue with its great value.