The compact Beko MOF 20110 isn’t the cheapest microwave you can buy, but it’s affordable and a great little appliance.

The capacity is on the small side and there’s no grill or oven, but its controls and cooking are good for the price. 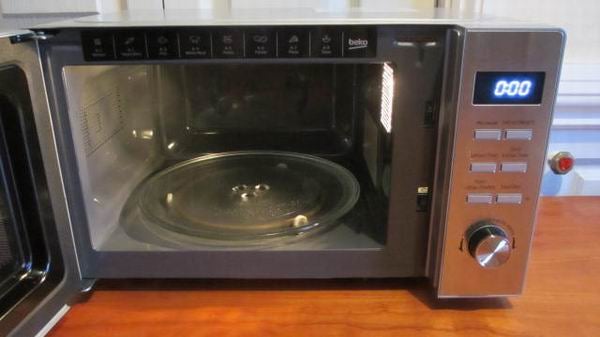 The Beko is small and simple. It isn’t a microwave in which you can fit a big dinner plate, and it doesn’t have a combi grill or oven. However, it does have eight auto programmes: Reheat, Vegetables, Fish, White Meat, Pasta, Potato, Pizza, Soup; you pick the quantity, it picks the time.

Beyond that, you can cook on five different power levels, defrost by weight or time, and hit the Start button to zap on full power in 30-second increments. You can also set it to cook in two stages, one after the other. Features include clock, kitchen timer and a child-safety lock.

The design is simple and boxy, with a fingerprint-proof black glass door and a not-so-fingerprint-proof brushed stainless steel control panel. The controls are made up of six buttons and one knob; and inside the door there’s a cheat sheet reminding you of the eight auto programmes. 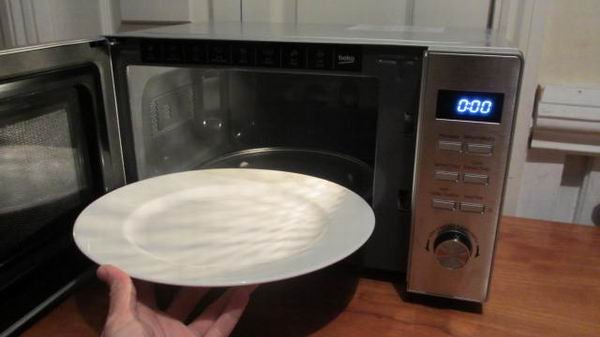 Defrosting a pitta bread was the first task. Defrosting by weight is only for 100-2000g, so I did it by time instead. It took 30 seconds to get it defrosted – it was neither too hot nor too soggy.

I found the position of the Start and Stop buttons rather annoying, though. They sit above the knob and the Start button is on the left, which feels awkward; Start buttons are conventionally on the right. 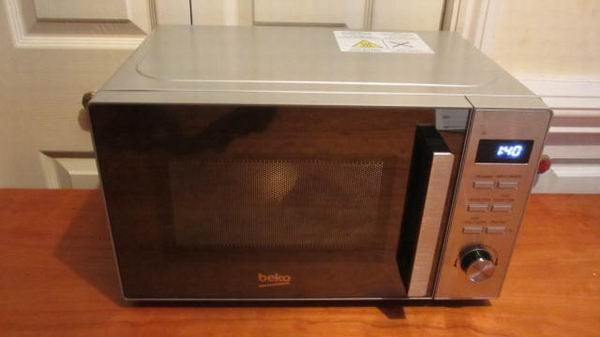 Next on the cooking list was a 250g jacket potato, for which I used the Beko’s auto programme. You select this from the eight programmes using the knob, then hit Start. Then use the knob to select the cooking weight; those offered are 200, 400 or 600g. We started off at 200g (five minutes).

The potato wobbled comedically as it cooked, even though the turntable didn’t seem especially jerky. The cavity is moderately well lit, so you can get some idea of progress.

In the end, the potato took eight minutes to cook through. I turned it over once, but the underside was still overcooked and crunchy. It was good, but not great. 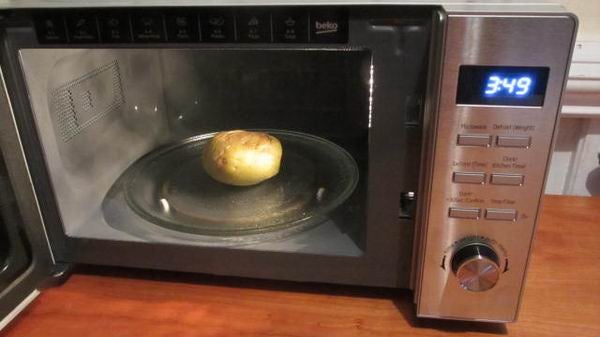 Finally, I popped a slice of frozen pizza into the Beko, first defrosting it for two minutes then cooking it for three minutes. It’s really something that should be cooked in an oven or combi – as such, the result was edible, but soft on the underside.

However, the melted-on cheese was a reminder that glass turntables are a faff to clean. Thankfully, the Beko plate is dishwasher-safe, as it its roller ring. 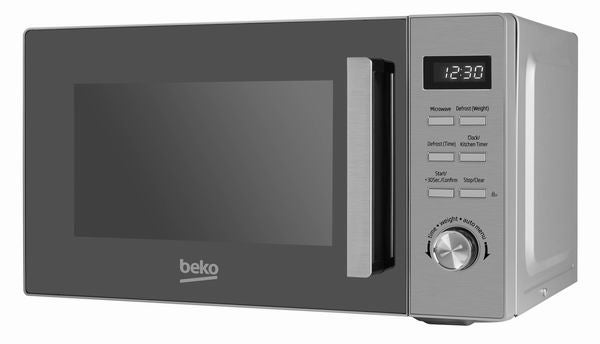 The Beko MOF 20110 is small and cheap, but it covers all the basics well and even has a set of programmes for popular foods. But reheating your dinner on a big dinner plate isn’t a possibility.

Spend a little more and you could get the Sharp R861SLM combi. Spend more still and the Panasonic NN-DF386 is an excellent appliance.