The Beko HII64430GT is a plug-in, four-zone, simple but nice-to-look-at induction hob with an attractive price of less than £300. Despite it being inexpensive compared to some of its rivals, it features a sleek design, nine levels of power, and a power-boost function.

Beko’s “Plug&Play” technology allows the hob to be plugged into a normal 3-pin mains outlet, but that limits the total maximum power to 3.0kW. This is unlikely to be a major issue unless you have several pans on the go at once. With its attractive, simple design, the Beko is clearly a model built for price – and this isn’t a bad thing, since it’s an excellent-value induction hob. 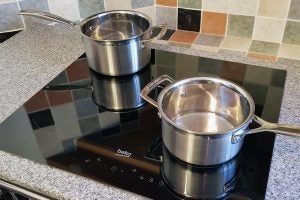 With white outline markings on a sleek black glass top, the HII64430GT certainly looks the part – even if the funky Beko logo comes across as little tacky sitting right above the controls. The four burners comprise two mid-sized ones on the left-hand side plus a smaller and larger unit to the right to cater for a wide range of pan sizes. Selecting your zone and adjusting temperatures is simple with the easy to follow control panel.

Unlike most four-zone induction hobs, the HII64430GT offers “Plug&Play” technology for easy installation, as the unit can be plugged into a normal mains power socket. However, don’t get too excited, since this limits the power to around 3kW in total. While that’s fine on a single burner, switching on further burners will distribute the total power, limiting heat-up speed. 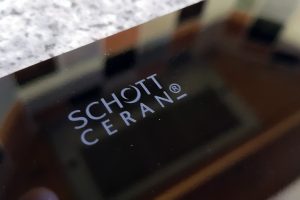 Helping you save some of that time, the Booster function will set the HII64430GT to its maximum power to swiftly boil water or heat up a frying pan. There’s a timer function included that will turn your cooking zone off automatically at the end of the time you’ve selected. Great stuff.

If you have inquisitive toddlers running around the house, the HII64430GT features a child-lock function; when in use, an “L” will appear on all cooking zone displays. That’s about it for features, which is fair considering the hob’s budget price. 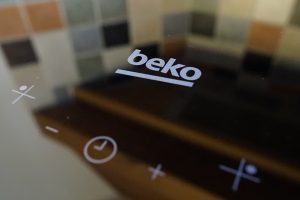 With four zones and nine power modes, the HII644430GT is a simple hob. Equipped with small, normal and large cooking zones, we found that using circular-based pans produced the best results. Using a very large skillet or tray would work sufficiently if it were placed over two zones, but since there isn’t an easy way to link zones, and they’re quite a way apart, it isn’t a key feature. 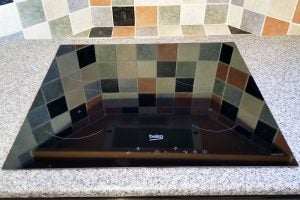 The HII644430GT promotes easy installation since the induction hob can be plugged directly into a standard 13A socket. This is great until you realise that this limits the power you can use to around half of a wired-in hob – which typically have a total power of around 7400 watts.

The HII644430GT draws a maximum of 3kW between all burners. We found that fine if you have just one or two burners on the go. Move up to three or four pots cooking simultaneously and things slow down considerably.

The Beko’s touch controls are super-responsive for a budget hob, with a single key press selecting the zone and adjusting power. There’s no slider on the power, which arguably makes things simpler, and the “+” and “–” keys work easily. Our only issue was going beyond power level 9 into the Boost mode, which sometimes took a couple of tries before we managed to engage the mode. A separate Boost mode button would be a better bet – but hey, with the HI644430GT coming in at less than £300, this isn’t exactly a deal-breaker. 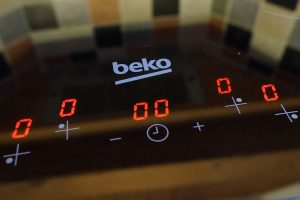 During heating and even in Boost mode, the HI644430GT was nicely quiet… until it began making a squeaking sound. We checked for rogue mice, but as temperature increased this simmered down. Overall, we’d say the Beko was rather peaceful. The squeak didn’t rematerialise, so we put his down to bedding-in noises. 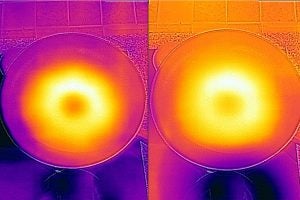 Thanks to the Boost mode, the HI64430GT produced super-speedy results with just a single pan on test. Our smallest 17cm pan with 1 litre of water was raised to 90ºC in exactly 4 minutes while drawing 1.8kW. This was using the smallest 14.5cm burner at the bottom right, giving us a great result.

Using either of the mid-size, left-hand burners we saw exceptional heat-up to boil results: the hob delivered its full 3kW promise to our 19cm mid-sized pan. The 1.5 litres of water was raised to 90ºC in a mighty quick 3mins 30secs, which is one of the quickest results we’ve seen – irrespective of price. 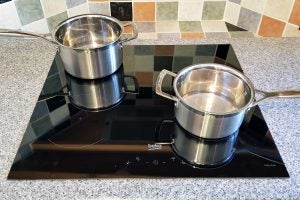 Our largest-size 21cm pan on the biggest burner was no slouch, either. With 2 litres of water, the temperature was raised to 90ºC in 5mins 35secs, drawing a stellar 2.8kW. All good results… as long as you’re using just the one pan. If you have a number of pots on the go then heat-up times will be far slower as that limited 3kW is spread around the entire hob.

Although Beko promotes easy installation with the plug-in function, we do question the logic. It limits the total power to just 3kW, slowing multiple pan-heating times – and do you really need your hob to be portable by plugging into a mains socket? It isn’t as if most people decide to use their hob in a different room around the house, depending on which day of the week it is.

A hard-wired hob may cost you a little more in terms of installation, but we’d opt for that over a 3kW limit every time. 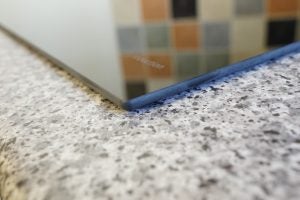 Affordable, stylish, easy to use and packing super-quick single-pan heat-up times, Beko’s HII64430GT looks like a bargain buy. There isn’t much in the way of features, save a Boost mode and child lock, but the controls are generally a delight to use and everything is very logical.

The question mark for us is the Plug&Play feature. Yes, this Beko can simply be plugged into a mains wall socket for ease of installation, but that limits total power to a conservative 3kW… slowing multiple-pan heat times dramatically.

If you’re unlikely to have multiple pans on the go at the same time, the HII64430GT is great value and would look grand in any kitchen.