The original idea of this article was to review BeInSync Pro as an online backup utility, in a similar vein to Carbonite, covered in our recent round-up of back-up apps. When we started to look at what BeInSync does, though, we saw that backup was just one aspect and not the main one of the product.


The name gives it away; the primary purpose of BeInSync is to synchronise the contents of several PCs, in a similar manner to Microsoft’s Briefcase facility, but in a more comprehensive and easier to use way. Simply download and run the BeInSync front-end from the company’s site, on each machine you want to synchronise, then run the BeInSync software and fill in the folder details. 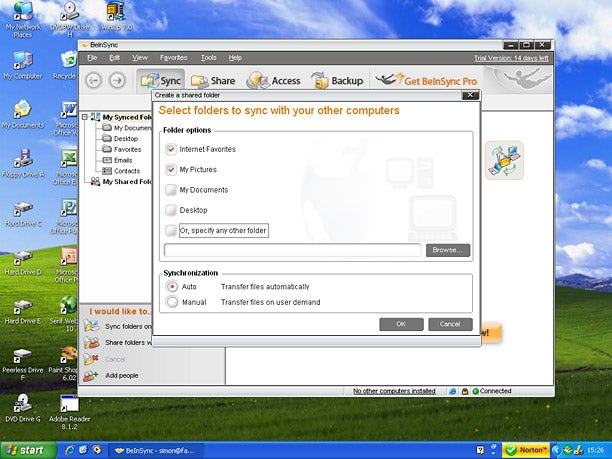 You can sync every file in up to 15 folders on up to five PCs with the BeInSync Pro product and there’s BeInSync Business if you need more than this. Most people will limit its use to popular data folders, like My Documents, My Pictures, My Music and My Video, though. The software offers these and some others, like Internet Favourites and the desktop, though not email inbox and contacts. These two are available through a separate Wizard.


Syncing is automatic and after the initial copying of files, only happens when you save new or modified versions.


The program is intelligent enough to spot potential duplication and asks which particular folders should be synchronised. This is important if you’re synchronising between XP and Vista-based PCs as, for example, My Documents under XP becomes Documents under Vista and you could end up with two similarly-named folders on each PC, wasting a lot of space. 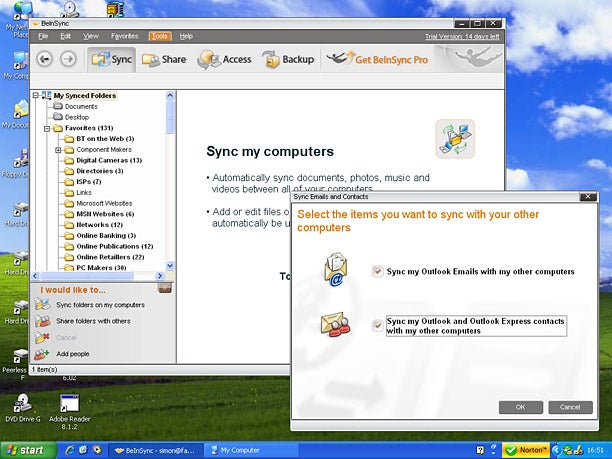 As an advert on BeInSync’s own site reminds you, if you’re syncing between home and office PCs, you need to take care which material is copied between them. It could be against company policy to take work files off site, for instance, or you might have files on a home machine you really don’t want to appear on one at work.


When it comes to online backup, you get 5GB as standard, but can pay for more as you need it. Given the upload speeds of most broadband links in the UK, handling more than 5GB could be tedious, but many people’s My Documents folders on their own exceed that limit. It may be necessary to select out within a big document folder and pick sub-folders containing just the most vital data.

You can select back-up to be immediate, so any time you save a new or updated file to one of your designated folders it will also be copied to the online store. Alternatively, you can choose to backup files at regular intervals, say once a day.


Backed up files are held on Amazon’s servers. While we have little doubt these are secure, given the volumes of retail traffic they have to handle, we would be happier if data wasn’t held by a third-party and wonder who would be liable, if it did get hacked. 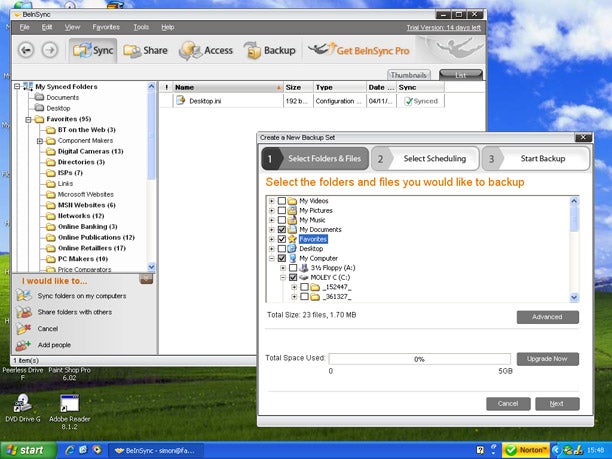 If you choose active backup, the process goes on in the background while you continue to work. There is a small resource hit, but since work files tend to be small and only saved occasionally, it isn’t too noticeable in normal use. You can specify to hold two or more versions of files, giving you an archive for reference.


As well as sync and backup, two other options are available in BeInSync: Share and Access. Share provides a way of sharing specific folders not just with others on your network, but via an Internet link, in effect making your PC a Web server for a closed user group. Everything is encrypted and people you give access to just see a list of files, a bit like looking at an FTP page. 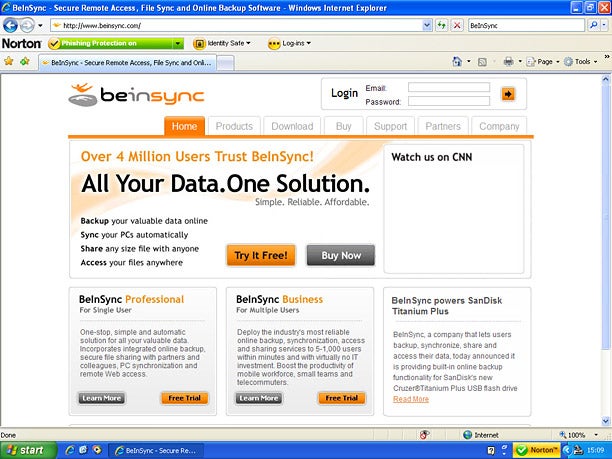 Access is the online storage trick which enables you to get at your backed up files from any machine with Internet access or to go through the site to your own BeInSynced PC. The BeInSync site is secure so once you’re in you can look at and copy your files to a remote PC, saving the hassle of having to carry around a PCAnywhere-style application in order to get at your stuff.


If you want to try BeInSync, a free version of the program is available which can sync five folders between two machines and provides 1GB of online storage. If you’re needs are modest, you may not need to pay anything for BeInSync.


As an online back-up resource, BeInSync has an obvious restriction, in comparison with Carbonite. The Carbonite backup size is unlimited, while BeInSync has an initial limit of 5GB and you have to pay for more. In its favour, though, BeInSync does the synchronisation thing so you effectively have several backups between your own PCs. Everything you select is held on up to five machines and kept in sync automatically each time you click Save. This is a clever product but, at £30-odd ($60) a year, you need to be sure a simpler local backup solution won’t do the job just as well.