Hands-on with the BeeLine: cycling navigation that simply points you in the right direction

Cycling in a densely populated city can be scary. Not only do you have to deal with other methods of transportation fighting over territory (including fellow cyclists I might add) but pedestrians and haphazard construction, too. The added problem of not knowing where you’re going just adds to the danger cocktail. I, as an inexperienced cyclist with no sense of direction, can get lost simply going around the block.

There are plenty of GPS-based navigation methods available, of course. A lot of us get on perfectly fine using our phone, a handlebar mount and Google Maps or Citymapper. But following turn-by-turn navigation can be a distraction, which isn’t something you want when the above dangers are already in need of your attention. 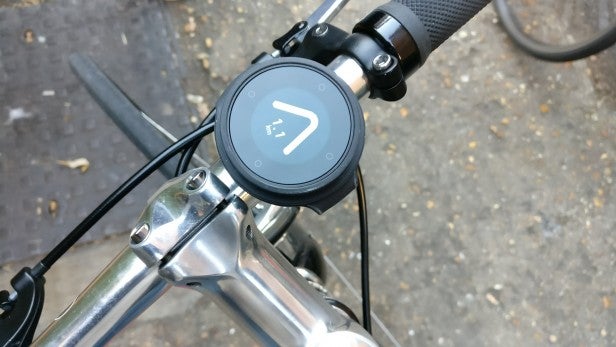 Enter the BeeLine, a product launched originally on Kickstarter, that looks to circumnavigate this problem by stripping away the specifics of a pre-determined route, and instead simply pointing you in the direction of your destination. A bit like a compass that points you precisely where you want to go rather than just to true north.

Of course, this does mean the route you take might well not be the quickest, but it does mean you glance down far less frequently, thereby keeping your eyes on the road. The idea is that you enjoy the journey a little more, opening up a bit of exploration and less partaking of the urban rat race. It all sounds a bit wishy-washy and those who want to get everywhere as quickly as possible shouldn’t bother. For everyone else there is quite a lot of merit here.

Without a prescribed route, you’re able to change your chosen route on-the-fly without it having to be recalculated. It meant that because I wasn’t the most confident rider, I chose to often take the quieter side roads instead, but knew I was still headed in the correct direction. With my sense of direction being so poor, I did find myself taking much longer routes as a result. 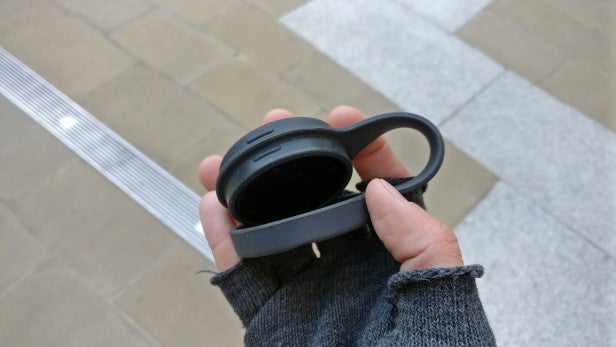 As for the BeeLine itself, it’s a puck-shaped device that sits inside a rather clever silicone band. It’s this band that attaches to your handlebar by stretching round and securing the device in place. When not attached, you can reverse it and use it as a protective cover for the display. It makes the BeeLine look a bit like the new Google Chromecast. It also means you can attach it to your keys or a bag to keep with you. If you frequently use bike rental schemes, the BeeLine could be really handy.

BeeLine showed me a number of early prototypes and the mounting method has come a long way. Earlier models didn’t have a detachable silicone sleeve, with the device permanently attached, for example. The BeeLine in its near-final form felt far better constructed. 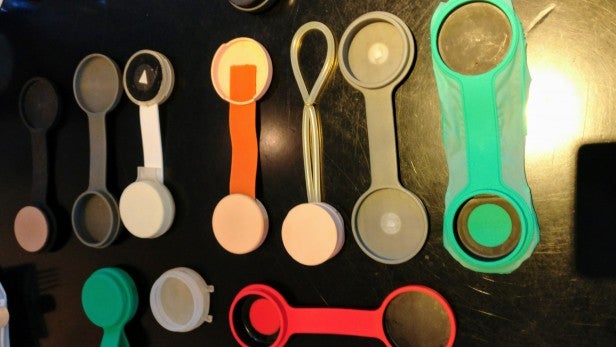 When setting a destination, you use the BeeLine app on your smartphone, and this communicates with the bike device through Bluetooth. Just tap in your destination and it’s beamed across. The compass-like arrow then points to the spot and a distance is provided on the display. You’re then ready to set off.

The app can also actually be used independently of the BeeLine device as you can get the same navigational arrow interface on your phone. So why bother with the BeeLine at all? Mainly for its weather resistance, easy method of mounting and long battery life.

The compass in the BeeLine should supposedly also be more accurate than the one in your phone, and less prone to being thrown off course by magnetic interference or large metallic structures. Still, BeeLine hopes that the app’s functionality will also act as a gateway to people buying the device, a sort of ‘try before you buy’ approach. 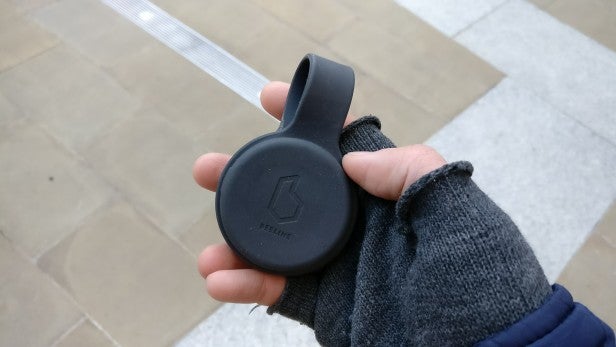 Supposedly, you will only need to charge the BeeLine once every four weeks of regular use through its Micro USB port. Part of the reason for that longevity is the e-Paper display, as well as the fact that internally it actually only has a magnetometer, accelerometer and gyroscope. The GPS is used from your phone to set the destination, then the internal sensors are used to make sure you stay headed in the right direction.

Once you’re off on your travels, you can tap the navigation buttons along the edge of the screen to change displays. You’ll be able to see your current speed and distance. These again are judged by the GPS sensor in your phone. Unfortunately, the unfinished prototype I tested had a software bug that meant this wasn’t actually working. BeeLine told me this would be fixed before launch.

As a novice urban cyclist, I came away impressed by the BeeLine. I can see it being a fun way to actually enjoy cycling, rather than just viewing it as a way to get from A-to-B. If you want the most efficient route to your destination, it’s probably not for you.

I found the at-a-glance directions made it easier to concentrate on the road, and I didn’t hesitate as much when deciding to take an alternative route compared to turn-by-turn navigation. As such, cyclists might find themselves making split-second decisions less frequently, which could make a massive difference to road safety.

BeeLine is aiming to ship to its Kickstarter backers within the coming weeks, and hopefully by then a few of the kinks will have been ironed out. The device is also available to pre-order from the company’s website for £99.