When he’s not having hair transplants or destroying England’s Euro 2012 chances by getting sent off for petulantly lashing out at a Montenegrin footballer who had the temerity to stand between him and the ball, Wayne Rooney has trouble sleeping.

In an infamous 2006 interview with The Mail on Sunday, Rooney revealed that sometimes the only way he can fall asleep is by having a hairdryer, fan or vacuum cleaner running somewhere nearby. And this apparently aberrant behaviour is nowhere near as rare as you might imagine.

So common is it, in fact, that there are numerous Android/iPhone apps designed to produce simple sounds like white, brown or pink noise, falling rain, lapping oceans, running streams and so forth to get your mind in the mood for sleep. Some, such as TMSoft’s White Noise, are not only popular but critically acclaimed. 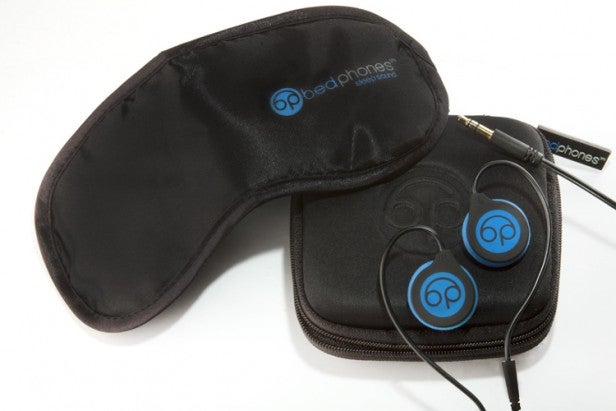 As you might have guessed from our knowledge of the ‘sleep noise’ subject, this writer too suffers from the same wife-irritating habit, finding it extremely hard to first sleep and then stay asleep if I don’t have a fan running constantly about a foot or two from my pillow.

One final fellow sufferer to tell you about is the brilliantly named Eric Dubs from New York –  only his bedtime audio tipple of choice is apparently music, not just noise. But the cool thing about Mr Dubs is that he happens to have a degree in mechanical engineering to go with his passion for both music and getting a good night’s sleep. So unlike Rooney and us, he’s been able to actually design a product to make his night life easier: the Bedphones.

As their puntastic name suggests, these are headphones specifically designed to be worn in bed. So you can keep your ears full of soothing sound without disturbing your long-suffering spouse.
Obviously any headphones designed for this purpose need to satisfy at least two basic criteria. 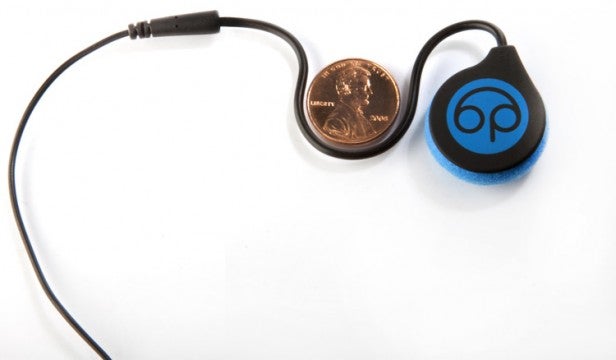 First, they need to deliver a reasonable level of volume without discernible sound ‘leaking out’ for other people to hear. Second, they need to be unbelievably comfortable. Even when you’re lying on your side with your ear pressed to the pillow.

All the other headphones we’ve tried to wear during sleep have failed dismally on the comfort front, as either their frame or their ear ‘buds’/cans push or dig into your ear in a way that guarantees you’ve got no chance of getting to sleep. About the only solution we’ve encountered that works is the custom molded silicone earphones produced by ACS, but they’re £500 a pop. Dubs himself admits to having tried nearly 100 prototypes before hitting on the final Bedphone design. But his persistence has paid off handsomely, as lying our head down on its side with the Bedphones on wasn’t even remotely uncomfortable, never mind painful. In fact, we could scarcely tell we’d got the Bedphones on – aside from the soothing static noise they were playing straight into our ears, of course!

The Bedphones ‘trick’ to achieving this seemingly impossible feat has turned out to be surprisingly simple, and comprises just two main features. First, there’s the mouldable memory wire that loops over the top and back of your ear to hold the ear pieces in place. This allows the Bedphones to shape their narrow wire fitting device to more or less the exact contours of each individual’s ears, so that you can barely feel they’re there even though the wire is attached snugly enough to provide decent fixing support for the ear phone.

The other key element is the construction of the ear piece itself. Dubs’ experiments have concluded that the most universally comfortable approach is to attach a soft piece of flat foam slightly bigger than a 20p coin to a slightly smaller backing ‘plate’. And again, this works a treat, moulding beautifully into our ear when sleeping directly on them. There’s absolutely nothing pressing uncomfortably against any of the sensitive cartilage that makes up your ear’s shape. 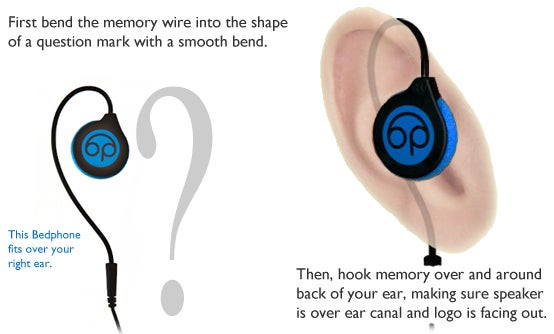 The last thing to add about the Bedphones rather inspired design is that while they fit comfortably within the folds of your ear, they don’t grab on so tight or squeeze so deeply into your ears that they start to make you feel claustrophobic.

It should be stressed that the Bedphones design is so specifically tailored to bed use that they wouldn’t really make a very practical set of ‘every day’ headphones. But this is fair enough so far as we’re concerned, given their affordability and the fact that we consider them to be more a ‘health and well being’ product than a simple set of headphones.

There is one bit of bad news regarding the design, though, and that’s the fact that there’s still a cable between the headphones and your audio source. The cable used by the Bedphones is light and decently long at 1.5m (though another .5m would have been nice), but if you’re restless sleeper there’s clearly potential for the cable to get wrapped round your head or neck; tug the jack out of your audio source; or even drag your audio source on to the floor.

We realise it really wouldn’t have been realistic to expect the Bedphones to be wireless without compromising the rest of their design, especially when they only cost £27. But it’s still a simple fact that for us, no set of bedtime headphones will ever be truly perfect until they don’t have a cable.

Getting back to the good news, the little Bedphones app for Android and iDevices is simple but effective. Particularly welcome is a timer mode that can be set to automatically turn off your music after a time period of your choosing – handy if you just need sound to help you go to sleep rather than needing sound to be playing all night. When in sleep mode you can also touch anywhere on your smart device screen to pause and unpause playback.

When it comes to audio quality, how effective the Bedphones are depends on what you want to hear on them. For us, our favourite sleep aid is white or brown noise, or the monotone whirring of a fan. And with this relatively undemanding sort of sound the Bedphones are more than up to the job, enabling you to enjoy a reasonable amount of volume without harshness. The tone is even and stable too, avoiding any of the pulsing problems or volume variations that might otherwise disturb your sleep. 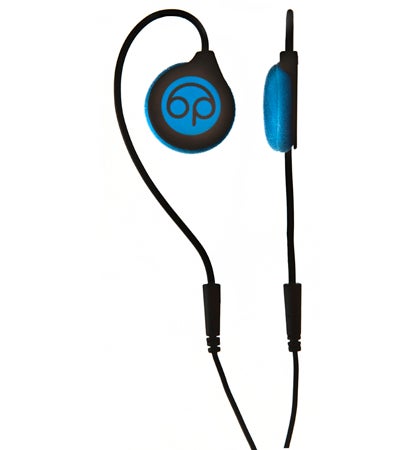 The only time the volume changes dramatically is if you turn from lying on your back or front to lying on your side, for obviously pushing the ear piece deeper into your ear canal leads to a rise in volume. However, surprisingly this didn’t disturb us too much provided we hadn’t set the volume level too high in the first place.

If you want to listen to music, the Bedphones’ sound quality is rather less satisfying. On the upside there’s an impressive degree of clarity and stereo separation, which helps relatively lightweight music sound detailed and clean. But the little ear pieces really struggle to produce any sense of bass, which is clearly pretty damaging to your average pop or rock track. The result is that anything other than fairly light classical music tends to sound thin and lopsided, with drum beats actually becoming quite distorted when the going gets even remotely raucous. 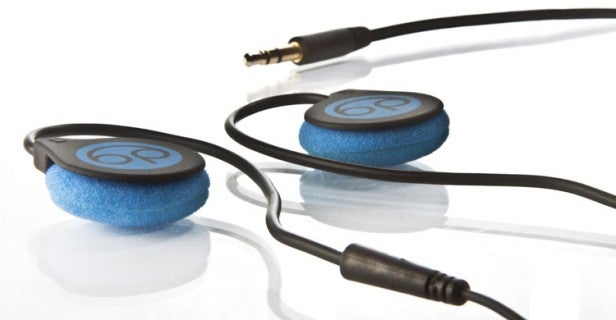 To be fair, it’s hard to imagine many people wanting to drift off with Ace of Spades blaring away in their ears. But even the mesmerising tones of something like Sigur Ros’ Takk album tend to sound a little distractingly harsh on the Bedphones.

Verdict
Even though they still (inevitably) require a cable to connect them to your audio source,  the Bedphones can be considered something of a triumph in design terms, managing to be so light, malleable and soft that you genuinely can’t feel them even when your sleeping head is lying right on them.

Where they’re much less satisfying is with their audio quality, as they struggle to sound pleasant with all but the most lightweight or monotone of audio sources. But then such simple sources are precisely the sort of thing most ‘night noise’ devotees will want to listen to anyway.

All in all, while the extremely focussed nature of the Bedphones design might limit their market, for people who find it hard to sleep £27 really doesn’t seem much to pay for a product that could genuinely change their lives.