What are the Beats Solo 2 Wireless?

Like most wireless sets, they use Bluetooth streaming to help you banish one very important cable from your life.

Working in tandem with the fairly head-gripping qualities of the original version, Bluetooth makes the Beats Solo 2 Wireless one of the best sets around for runners and gym addicts. However, if that’s not your profile, they don’t really have the sound chops to justify the very high £269 price. They sound nice, sure, but you pay top dollar for middleweight sound here. 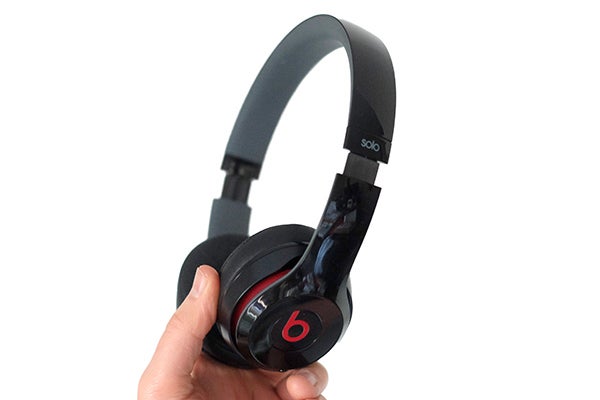 Looking just like their non-wireless brothers, the Beats Solo 2 Wireless are on-ear headphones with a more elegant, smooth design than the last generation of Beats headphones. While still immediately recognisable, slightly curvier contours make this model a bit easier on the eyes.

The glossy plastic of the Beats Solo 2 Wireless is not going to be to everyone’s taste, but complete their mission statement with verve. They are urban headphones with a nicely close-fitting headband. If it wasn’t for their instant youth associations and all-round glossy finish, this would be a design that pretty much anyone could get on with. 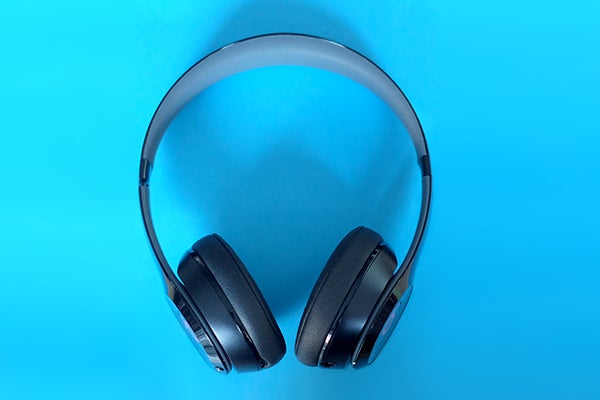 They prioritise a secure fit over all-out comfort, though. If you’re just going to be walking about rather than running, we think you might find the Bose AE2W more comfortable. They have a very light touch, where the Beats Solo 2 Wireless aren’t afraid to apply a kit of pressure.

The Beats Solo 2 Wireless have a mid-firm headband that teams-up with a rubber-finish headband inner that keeps them glued to your head pretty well.

Given the headband pressure, though, we find them pretty comfortable regardless. The design is careful about spreading force across the entire earpad, doing its best to avoid earache. One caveat, though: we found they don’t suit glasses wearers all that well, the headband pressure causing a bit of discomfort if you’re going to keep the things on for an hour or more. 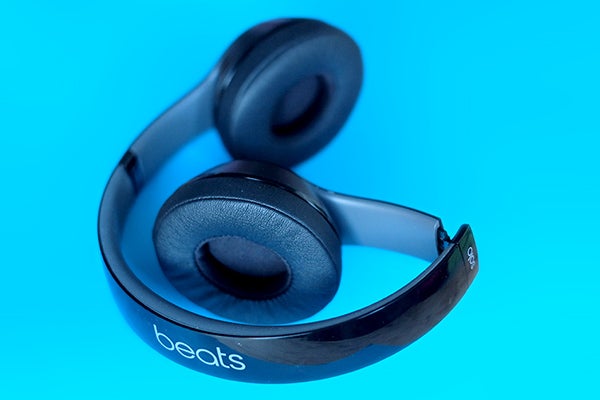 Like the non-wireless Solo 2, these headphones use fake leather pads, although following a side-by-side comparison it does seem Bose has chosen to use ever-so-slightly softer, lower-density foam in this model. If this is a change caused by customer feedback from the Solo 2, though, it’s perfectly likely that the non-wireless model will get this new type of foam.

One of the more impressive elements of the Beats Solo 2 Wireless is how subtly wireless has been integrated. There are no battery compartments or ugly buttons  to deal with.

They use an integrated lithium battery, charged using a Micro USB port on the right cup. There’s a tiny power button on this cup too, but all the other buttons are cleverly hidden in the Beats Solo 2 Wireless’s design. 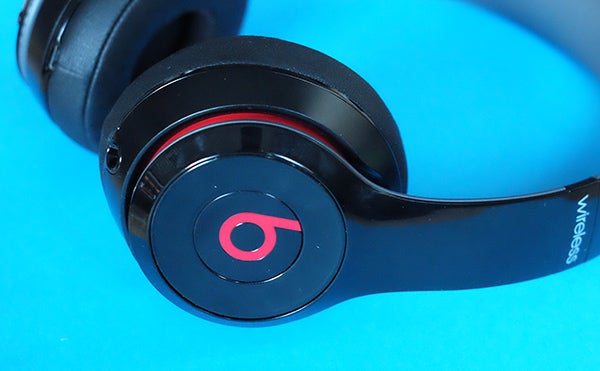 The Beats logo and the ring around it on the left cup take on the role of a three-button remote. The logo acts as a play/pause button while pressing above and below changes volume. It’s about as neat as wireless headphones get while packing-in all the control we’re after. There are even tiny battery indicator LEDs to let you know how much of the 12-hour battery you have left.

Wireless performance was entirely flawless, something we don’t often get to say about wireless headphones. It’s quite natural for there to be some little digital jitters, but we didn’t experience a single one when the Beats Solo 2 Wireless were within arm’s length of the phone source. That may not sound like an achievement, but the last set we reviewed, the Philips M2BT, we fairly prone to such glitches. 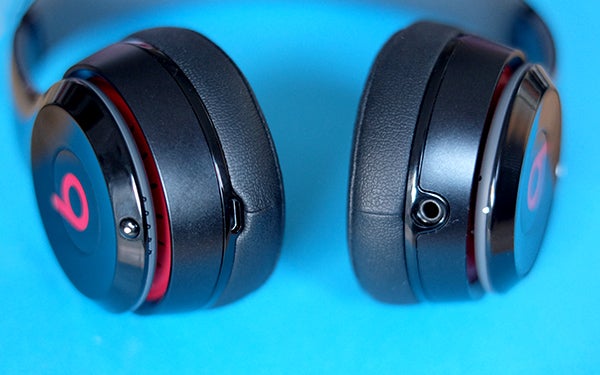 Despite being a powered headphone, the Beats Solo 2 Wireless don’t offer any form of active noise cancellation, but their passive “dumb” isolation is easily good enough to contend with public transport. They fare well enough on the London Tube.

Add together all the good bits of the Beats Solo 2 Wireless and it’s not hard to formulate a few situations where they’ll be perfect. Good grip, decent isolation, a folding design and wireless are all assets.

In the gym, or out exercising where you don’t need your wits about you, they are great. However, look at the hefty £269.99 price and just listen to them and you have a right to take issue.

The Beats Solo 2 Wireless cost around £100 more than the non-wireless model, and even at the lower price we were only just about capable of making peace with the Beats Solo 2’s sound quality. These headphones sound very similar, virtually identical when used with a cable – which you can do, should the battery run out.

Before we say anything too mean, though: the Beats Solo sound has improved hugely since the original Solo and Solo HD, sets that were pretty criminal in their price-to-sound-quality ratio. 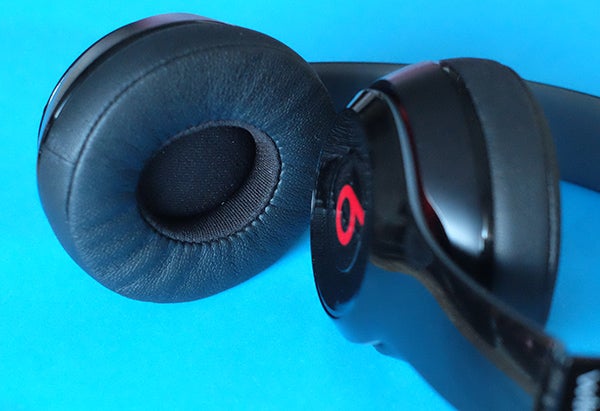 The Beats Solo 2 Wireless are pleasant-sounding headphones with the bass skew that’s become virtually synonymous with the brand. However, the sound isn’t reduced to the bassy fog that you might have hears Beats-haters talking about.

Extra bass comes in handy when you’re out and about in the city too. So much of the city’s noise is a low-frequency rumble that truly accurate bass can struggle to compete with it, especially when using a headphone without active noise cancellation like this. Once again, the Beats Solo 2 Wireless is well-suited to urban environments and noisy gyms.

The sound is not really hifi stuff in some respects, though. The bass is a bit flabby and ill-disciplined. It’s a step up from the last generation, but it’s still not audiophile-style bass. 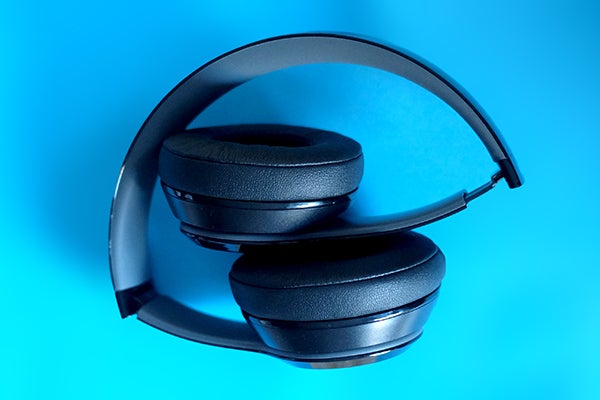 What holds the Beats Solo 2 Wireless back from offering the sort of sound quality we expect at £250-plus, though, is mid-range clarity. The mids are quite soft-sounding, limiting the sense of separation. We expect fairly good separation in a headphone at this price. And we don’t really get it here.

Beats has made sure it has fairly decent top-end clarity, though. Unlike the earlier Solo models the treble is pretty well-defined. If you’re not looking for a real high-end audio experience, we think you’ll probably be fairly happy with the easy-going bassy sound here. It’s enjoyable.

The wireless tech used here isn’t going to help either. The Beats Solo 2 Wireless do not support apt-x, the higher-grade Bluetooth codec designed to avoid some of the sound quality issues of Bluetooth audio. Instead they use SBC, the ‘basic’ codec. This streams audio at a lower quality, and with greater latency.

It’s disappointing, especially when the original wireless Solo model was advertised as having apt-x — we didn’t test that pair ourselves. Not having it at this price is pretty poor. Why the downgrade? Putting our cynic’s hat on, Apple’s mobile devices don’t currently support apt-x and Beats is now Apple-owned.

Testing the Beats Solo 2 Wireless with the included cable instead of wireless, there is a slight sonic improvement across the board. However, the sound signature actually helps to minimise the difference, because it’s not terribly deep-searching. That’s just not what the Beats sound is about. 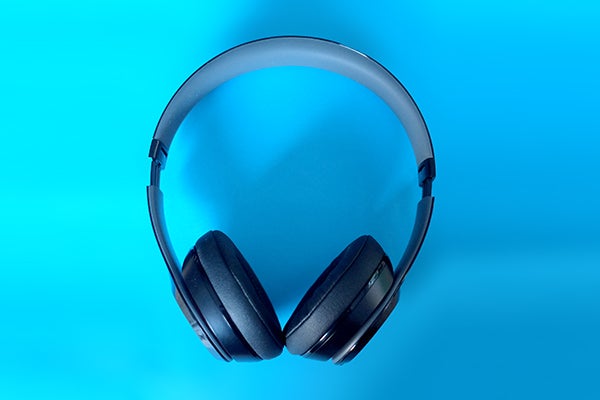 Should I buy the Beats Solo 2 Wireless?

The Beats Solo 2 Wireless are a patchwork of good and bad. As exercise headphones they’re excellent, offering pretty terrific wireless performance and a very savvy implementation of wireless control. As long as you don’t mind a tighter fit and don’t wear glasses, they’re fairly comfortable too.

However, if sound quality is the top concern, you can do a lot better at the price. Drop wireless and you’re in serious headphone land, populated by sets that would laugh at the Beats Solo 2 Wireless’s chops.

If wireless is a must, there are just too many other lower-price options out there that perform at a similar level. The Philips M2BT and Bose AE2W are almost £100 less, and while neither is a sound quality god, we find their sound quality issues much easier to live with at the price.

Grippy design and fuss-free wireless are great for exercise use, but sound should be better at the price.