Beats Flex is a good pair of headphones and a decent choice if you’re picking up an iPhone 12 and don’t want to spend more on AirPods. The smarts that come from the W1 chip is great to have at this price and the sound quality is ok, if a bit flat.

Alongside the iPhone 12, Apple’s Beats brand has unveiled Beats Flex – a pair of £50 wireless earbuds that are ideally suited to replace the lack of bundled buds with the new phones.

With rumours of the Beats brand’s demise as Apple prepares to unveil its own high-end, over-ear AirPods Studio in the near future, the Beats Flex might initially seem an odd release.

But when you consider the low price, great Android support, USB-C connectivity and perfectly acceptable sound, they could end up being a decent pick for those who don’t want to pony up for the far pricier AirPods.

Design and features – AirPods smarts on a budget

Unlike AirPods, which are completely wireless and recharge in a handy pocketable case, the Beats Flex is a pair of neckband headphones. The two earbuds are connected via a sturdy, flat plastic band the sits on your neck.

There are two thicker portions of the strap that help weigh the rigid wires down, and give somewhere for the innards and battery to live. This is where you’ll find the USB-C port for charging, a mic for taking calls and chatting to Siri/Google Assistant and a couple of buttons. All these buttons are easy and reliable to press, with firm feedback and a nice click. Once you got to grips with the shortcuts for stuff like skipping forward (double press) and enable a voice assistant (long press), it all works very well.

If you’re familiar with the Beats X, the £150 headphones these are replacing, then these look very similar.

Neckband headphones aren’t my favourite design for a number of reasons. For one, the Beats Flex is quite hard to fold up to fit in your pocket as all those flat cables are rigid and it doesn’t come with any sort of case to store them away in. I’ve also found the length of the wires is a bit long, leaving big amounts of it flapping around the side of my head. I guess this is a side-effect of having a one-size-fits-all approach, but it’s still something of a nuisance. 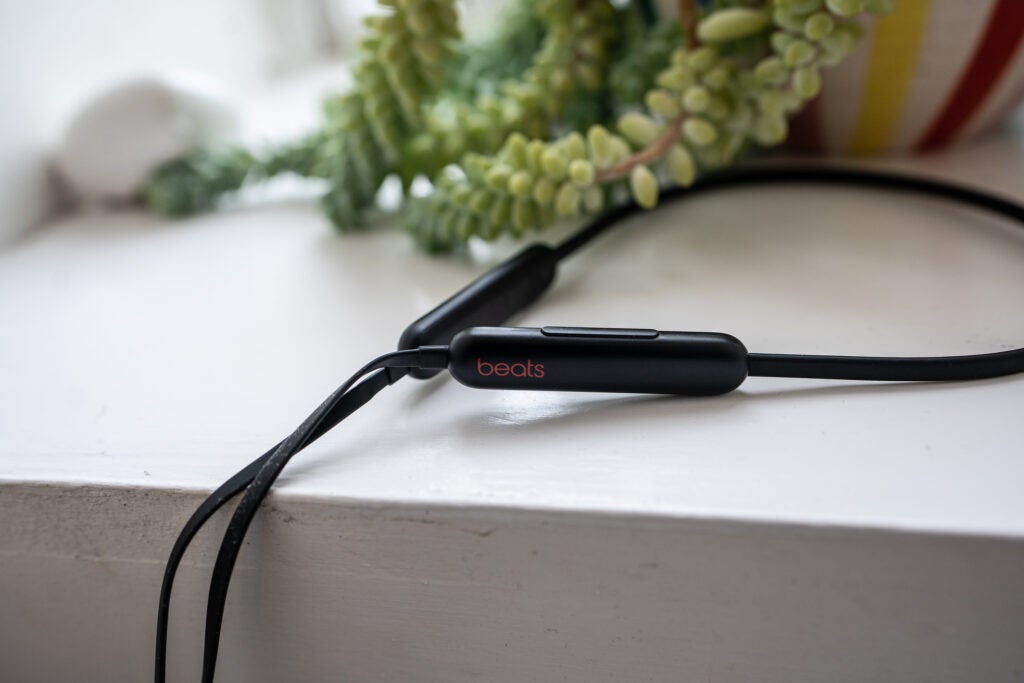 What I do like though is that when you’re not wearing the buds, they clip together magnetically and hang down by your chest meaning they’re always within easy reach. I would say the design is better for gym-goers and runners as there’s less chance of a bud accidentally falling out, however the lack of any sweat resistance disappoints in this regard.

The buds themselves are rather basic. You get four tip sizes in the box and I found them quite uncomfortable after a few hours of use. Far more so than the AirPods Pro, which also uses this in-ear style and I can happily keep in my ears until they run out of battery. This is very much a personal thing though, and if you’re fine with in-ear buds these will likely be ok for you too.

Inside the Beats Flex is Apple’s W1 chip, and it’s great to see this handy piece of silicon at the heart of these cheaper earphones. Bring the Beats Flex close to an iPhone and – as you do with AirPods – you’ll get instant pairing across all your connected devices. Don’t expect fancy new features like auto-syncing or Spatial Audio as neither of them are supported by this chip. If you’re on Android then there’s an app you can download to increase functionality, and it adds some iOS style cards alerting you of battery life when you connect.

While these are surely built to replace the bundled EarPods with iPhones, they work very well with Android too and the app brings across some of the previously iOS-only shine. 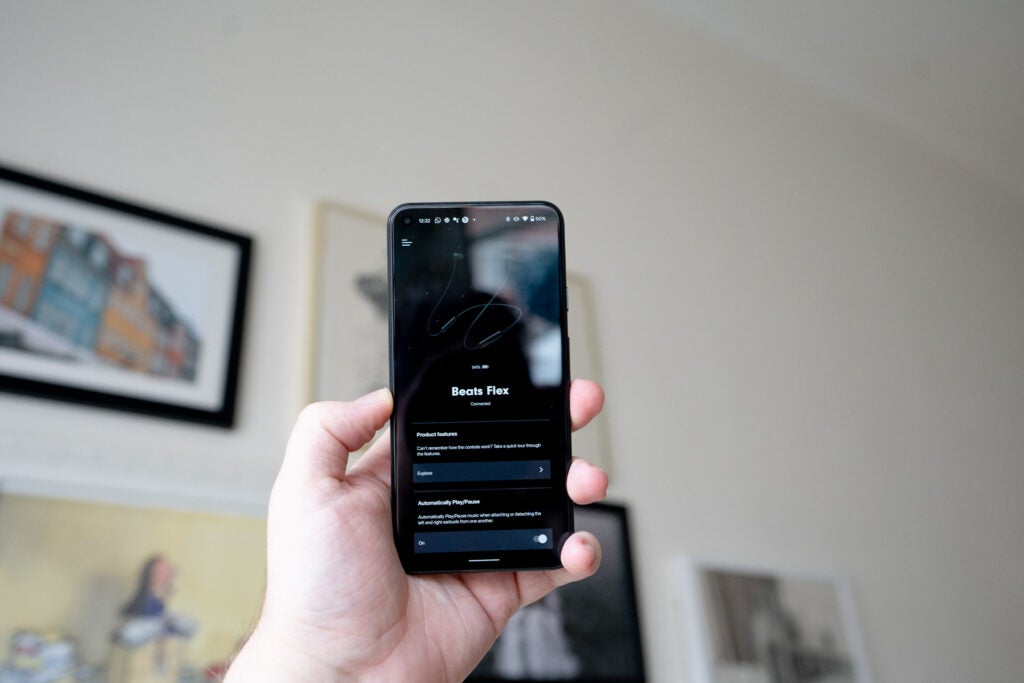 In terms of battery life, Beats claims around 12 hours and I have been getting just below this – around 10-11 hours. That’s more than you’d get from AirPods, but of course they benefit from having a charging case included.

The Beats Flex charge via USB-C, which is good news if you’re on Android but a little annoying if you have an iPhone. The older Beats X used Lightning, so you could use the same cable to juice them up as you used to charge your phone.

Sound quality – You get what you pay for

When it comes to sound quality, the Beats Flex are definitely nothing more than ‘OK’. If you want sound quality over, say, nice design or handy functionality then you’re probably better off looking elsewhere. However, if you’re used to the sound from the bundled EarPods and want something wireless then these are a good pick.

The main issue with the sound quality is that everything feels a little bit flat. Whether you’re listening to pop or rap, there’s no sense at all of a wide soundstage that gives songs their individual identity. Everything just sounds the same and while that’s nothing new at this price, it’s still a disappointment as Beats once had a distinctive sound. 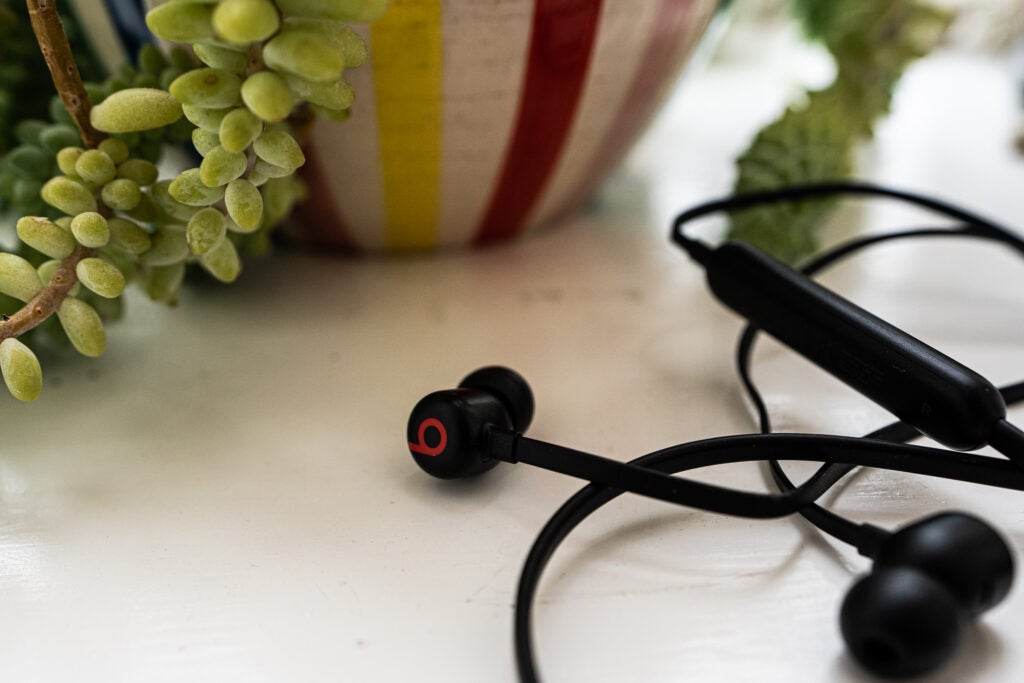 Bass is a little lacking too, a bit of a surprise for a pair of Beats. Yes, when compared to EarPods there’s definitely more oomph in bassy tracks – but it pales in comparison to even the AirPods, which I wouldn’t class as particularly bass-heavy.

These are not noise-cancelling buds, and the passive isolation you get with the in-ear design is basic at best. They’ll cut out a bit of chatter if you’re taking calls, but they don’t help at all in getting rid of the loud chatter on trains or buses. Speaking of calls, the in-built mics are fine and perfectly adequate for taking calls as long as the conditions aren’t too windy.

Should you buy the Beats Flex?

Beats Flex are a good pair of headphones and a decent choice if you’re picking up an iPhone 12 and don’t want to spend more on AirPods. The smarts that come from the W1 chip are great to have at this price, and the sound quality is ok, if a bit flat.