What is Beasts of Balance?

How do you even begin to describe Beasts of Balance? As the family board game that’s also a video game? As a toy-stacking and balancing game, where you create your own creatures? As the game where Skylanders meets Jenga?

Perhaps it doesn’t really matter. What does matter is that Beasts of Balance is a unique experience that, despite a few flaws, is a whole lot of fun. What at first appears to be a simple exercise in balance will eventually become a game of surprising choice and depth that will have you completely hooked.

It’s also still developing, with the company releasing a steady stream of updates, including a new battle mode. 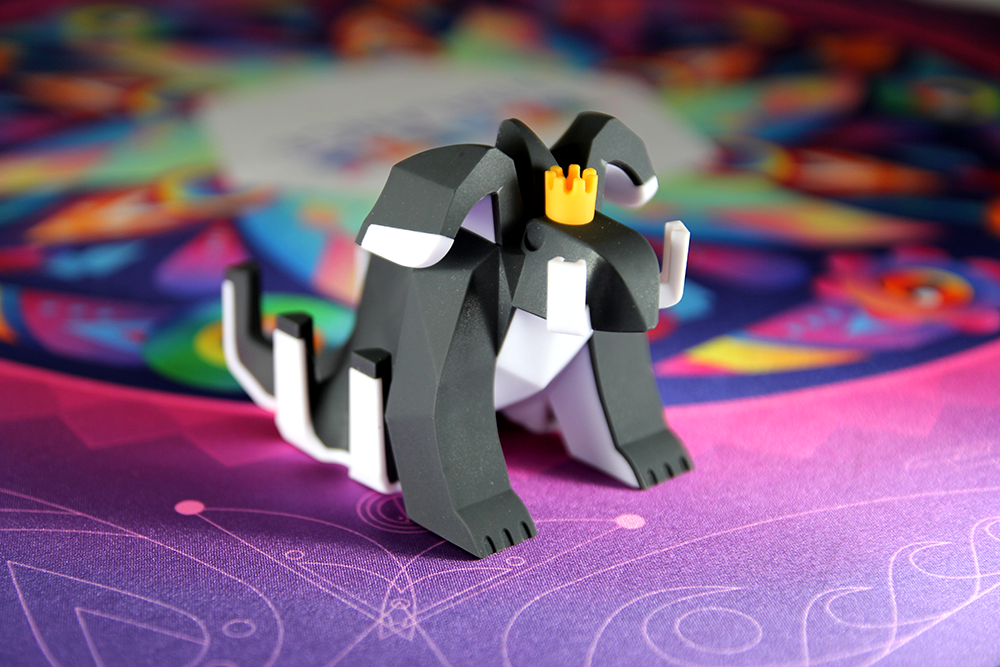 Beasts of Balance – The regular game

Insert three AA batteries in the plinth, download and install the iOS or Android app and you’re away, the app guiding you through the basics with a smart, well-designed tutorial.

You, it seems, are the creator of a new world, bringing beings to life by stacking them on the plinth. Each of the stackable beasts or shapes – artefacts in Beasts of Balance parlance – has an NFC chip built in, and by touching the icon on the artefact to the icon on the plinth, you can activate it, then carefully place it on the platform. 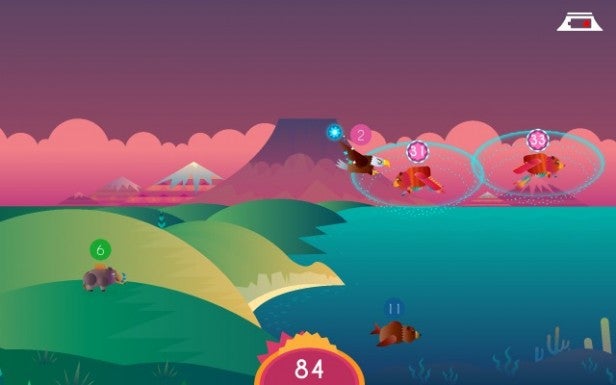 If it’s a beast, it will appear in the game. Your basic beasts belong to one of three elements – Earth, Sea and Sky – and will appear in the app in the appropriate area of your brave new world. Each beast also has a star power score, with the total score helping form your personal score as a creator.

Now things get more complex. The beast with the current highest star score makes any other beasts in your world envious, with the result that they lose a point of star power. If they lose all their points, they become extinct.

You can keep them going by feeding them elements; the polyhedra I mentioned earlier. Single-colour elements give all the beasts belonging to that element a decent feed, while two-tone elements split the feast across the two elements. Fire elements, meanwhile, give a huge bonus star power hit to the currently selected beast – generally, the one with a helpful firefly buzzing around it. 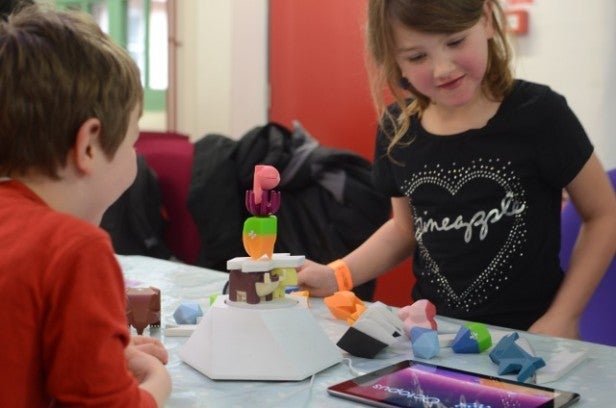 Beyond that, you also get the white shapes, which run one of two operations on one of your beasts. The cross-shaped one combines beasts, making a new beast out of, say, the shark and bear or octopus and warthog, leaving the originals in place. The arrow-shaped one migrates beasts into a new form, the sea-based Octopus becoming the land-based Rocktopus.

These migrated creatures or weird hybrids can then become the basis of even more bizarre creations, the points rising the stranger and more unusual your beast becomes. Keep a cool head and a steady hand, and the world fills with all kinds of bear-meets-shark-meets-toucan critters.

Beasts that reach 20 point or 30 point totals become Elementals: super-beasts at the top of the evolutionary chain. Finding a new one always feels like a real achievement.

Of course, while your brain is trying to deal with all this, your hands are busy trying to stack the different artefacts on the plinth. The team at Sensible Object has meticulously designed each one so that they’ll stand up at different angles in different positions, provide perches for other artefacts, and be weighted in different directions – but the more you place on the plinth and the taller your ad hoc tower gets, the trickier it all becomes.

In addition, because you need to respond to what’s happening in the app, not just what’s happening on the plinth, you can’t always place the object you’d like to because poor Warthog’s dying of starvation or because you’d really like to squeeze the shark on-board to make that killer beast combo you’d thought about earlier. 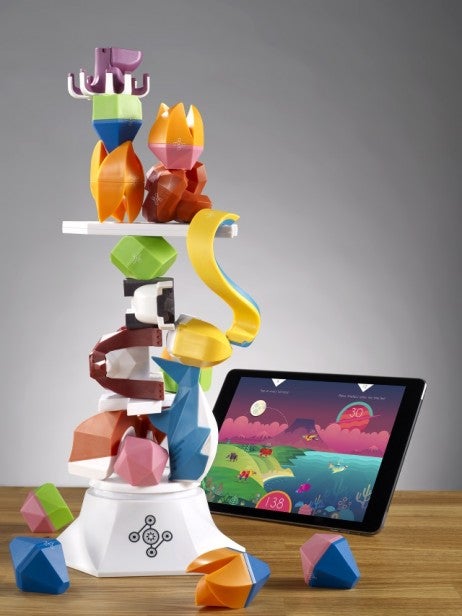 To make things even tougher, you have a small range of miracle objects that protect your beasts from losing star power points through jealousy, or that give you a bonus score for stacking quickly.

To make them work you need to stack while performing a tricky feat in the app, such as tapping or holding your finger on an icon. Given that just keeping a big pile of artefacts balanced is an art in and of itself, this could be your undoing when you’re trying to rack up a high score.

Lose that balance and your tower will come crashing down, giving you a few frantic seconds with a volcanic in-game countdown to replace all your artefacts before the world comes to an end, along with your game.

When that finally happens, you have two measures of success; the total score for your world when it ended, and the beasts you’ve made for the first time and added to your bestiary. There’s a little of that Pokémon “gotta catch ’em all” spirit in there too, and with so many different combinations of beasts and hybrids, it’s going to be a long time before you do.

Beasts of Balance is very compelling and worryingly addictive, lovingly presented both inside and outside of the app. The cool stylised graphics bring the different creatures to life, along with an atmospheric soundtrack from the Fez/Hyper-Light-Drifter composter, Disasterpiece.

By now, however, you might have noticed one of the oddities of the game. The basic pack hasn’t been designed to be played competitively – to do this you need to take advantage of the new battle mode.

If the basic mode doesn’t sound like your cup of tea, then you’ll be pleased to know Beasts of Balance is growing. Earlier this year, we had the beta launch of the long-awaited competitive Battles mode. Now we have new expansion packs, including more beasts to balance and optional Battle Cards. Do these improve the already fantastic hybrid board game?

Well, the new creatures do a fine job of adding much-needed new balancing options. We’ve been playing with the More Beasts expansion pack (£25), which adds the Flamingo, Chameleon and Angler Fish to the mix, with the three critters ingeniously designed to stand, hang from and hook around the other beasts and artefacts in all sorts of ways.

The Flamingo is especially useful when you’re short of space on the pedestal, or struggling to cram anything on top of a perilous stack. But we’ve also found plenty of use for the Chameleon and Angler Fish, particularly as both leave large, flat areas, where you can cram other creatures or support more awkward beasts.

If you want to go higher with your beast stacks then you’re going to want these beauties, and while they don’t present new strategies in-game, you’ll find their crossed and migrated forms as daft and inventive as ever. If you’re the kind of Beasts of Balance player who wants to track down each and every form, consider them essential. 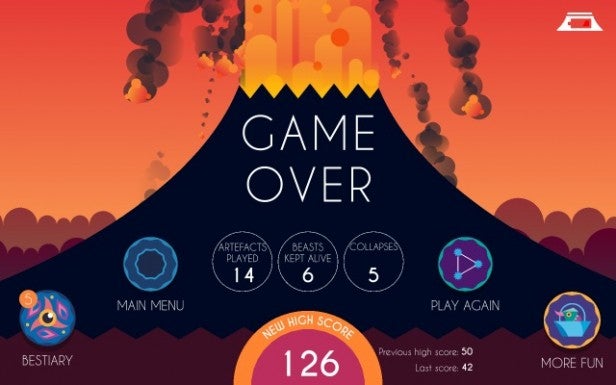 However, it’s Battles mode that brings the biggest change to the game. It’s still in development, with a beta label on the option in the app, but it’s clear that a lot of thought and testing has gone into making Beasts of Balance work as a turn-by-turn competitive game.

Basically, up to three players compete for points, taking either the land, the sea or the sky regions of the game. At each turn you add a beast or an artefact, with the new beasts appearing in your region – transforming to a new form, if necessary – and adding their points to your total.

Artefacts that feed your beasts boost their tally, while the cross and migrate artefacts are used to create new hybrid beasts from the beasts in play – or to rustle another player’s beast and add it to your domain.

You keep taking turns and adding beasts and artefacts until, eventually, the pile collapses. At this point, the poor player whose turn it is must reassemble the stack sharpish while damage rains down to take points from their beasts. If they fail to do so in the time allowed, then the player with the biggest remaining points total wins.

Battle mode works as a new way to enjoy Beasts of Balance, but I have a few reservations. Basically, with precious little space on the podium and only so many creatures and ways to stack, games often seem to be over just as they get going – you’re just starting to play around with tactics when the whole stack comes crashing down.

And while the current player can rush to rebuild it, the penalties on them for being unable to balance something on a ramshackle stack seem harsh – expect a few sulks during and after play. Of course, you could say the same about Jenga.

The Battle Cards add another layer of complexity. Each card contains an NFC chip and has some effect on your beasts, or the other players’ beasts, when scanned. During each turn you can draw one card, scanning the card to let the app know that it’s in your hand. You can then play one of your cards at any point – scanning it again in either your turn or another players’ – before adding it to the discount pile.

There are cards that damage another player’s beast, cards that steal a beast, and cards that curse a beast, so that several turns down the line it will damage all their beasts. There are also cards with more defensive roles, along with cards that allow you to replay an already-played card. All add new tactical options to Battles, making it more interesting than the card-less version.

Here, our experiences are mixed. The more aggressive competitive players love the cards, and Sensible Object has aced the in-app side of things, so that there’s a feeling that you’re doing something magical to the game world, tapping a target then holding on the icon while you work your smite spell or unleash your resurrective powers.

Beasts of Balance always works best when there’s a sense of the digital and physical worlds interacting to create something bigger, and the way the cards have been implemented fits this perfectly. However, some players don’t enjoy the added complexity, or the fact that it isn’t always clear how, or if, a card will work until it’s used. This means some cards have unwanted effects or are wasted altogether.

In fact, across Battles mode there’s a sense that Sensible Object is 90% of the way towards making its ideas work, but that the elusive 10% isn’t quite there yet. It’s fun, but still not quite as much fun as the cooperative game – which in our household we tend to play competitively just by playing solo and arguing over high scores.

Beasts of Balance’s light hasn’t dimmed, and it’s as fun and innovative in 2018 as it was when it launched back in 2016.

It’s a shame that the high costs (£70 for the core game and £25 for the More Beasts expansion) will be a barrier to playing for many. Nevertheless, it’s a lovingly crafted hybrid game – and there’s still nothing else quite like it.