It was always fun when family members old enough to remember the invention of the computer would insist on taking on whatever new video game I had to hand as a child – more often than not, if the quote above wasn’t a clue, the latest Sonic the Hedgehog.

Attempting to translate the complexities of the control pad, let alone the game it was in charge of, was a tricky enough task, though there was a definite simplicity to SEGA’s spiky mascot. Yes, my Nan may not have fully understood why exactly a blue hedgehog was, in her words, “jumping on TV screens” and “chasing the big fat guy with the funny moustache”, but she did at least grasp that she needed to run and jump. It’s why said formula – which, of course, had existed long before Sonic sped into town – still holds currency today. 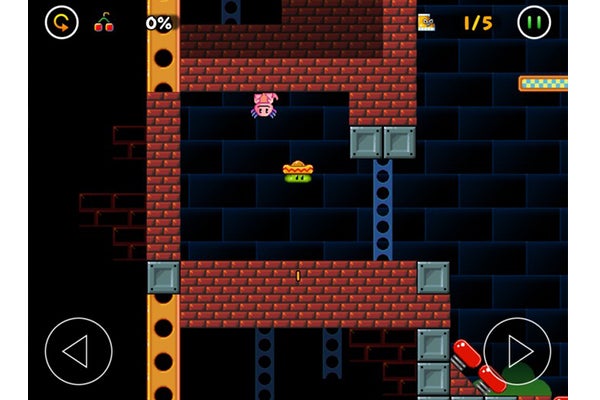 It’s not hard to imagine that my Nan – and, indeed, every other unfortunate family member who ever clocked eyes on my Mega Drive – would have been able to get to grips with Bean Dreams, too. Technically a sequel, Bean Dreams follows the adventures of a Mexican jumping bean, complete with a sombrero, as he bounces his way through a series of short stages, picking up fruit and jumping on top of crabs on his way.

The jumping – which is the base action in play – is actually taken care of for you, with your only input being to guide your bean left and right by touching the associated side of the screen. Success, therefore, becomes a case of navigating your way through each level, picking up all the fruit and taking out any baddies you encounter as you bounce. It’s an intentionally simple process that takes platforming elements we’re all familiar with and boils them down to bite sized chunks, perfect for mobile play.

But that’s not all. While Bean Dreams stands up perfectly well as a pocket-sized platformer, developer Kumobius has thrown an added ingredient into the pot to keep things interesting. For those just looking to pick-up-and-play, it’s possible to steam through Bean Dreams without a second thought. For an extra challenge, however, Bean Dreams will actually count the number of jumps you take to complete each stage, encouraging you to bounce as few times as possible. 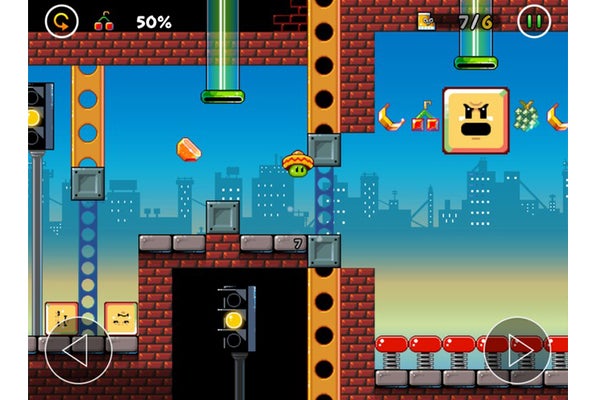 This isn’t just a random add on, either. The levels are so designed that it’s often possible to make your way to the exit using only six or so jumps, though a modicum of planning and repetition is required if you’re to hit whatever the target number is.

Still, in this way, Bean Dreams pitches itself as a game that’s worth coming back to time and again. So short and simple are the stages that the prospect of replaying them all in an attempt to jump as few times as possible isn’t at all vexing, though at the same time it’s not mandatory – like a Burger King ad from the early 1990s, you really can have it your way.

Perhaps Bean Dreams one weak point is the way it looks. There’s a fine line between attempting to recapture some retro gaming goodness – and, based on the sound effects and soundtrack, that’s exactly what developer Kumobius was aiming for – and simply serving up something that looks out of its time, and Bean Dreams is not especially attractive to look at. Indeed, though a Hideo Kojima style plot would be entirely out of place here, play would undoubtedly benefit from a little bit of context. 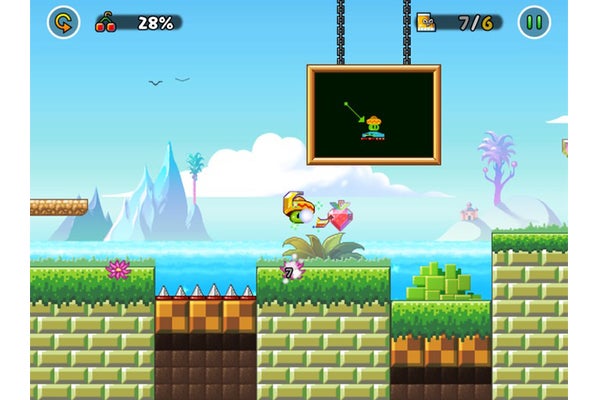 Nevertheless, as things stand Bean Dreams is a more than competent platformer boosted by a smartly interwoven puzzle element that helps it stand out from the crowd. There’s no real attempt at depth here and, indeed, both the controls and level design are kept intentionally straightforward both to bring you on board and to keep you coming back, tapping back in when you have a spare five minutes. Regardless, it’s this immediacy that means, for those who engage, Bean Dreams won’t be jumping off anyone’s home screen anytime soon.

Verdict
Part platformer, part puzzler, Bean Dreams is packed full of short, sharp levels with an auto-jumping system that lends itself to mobile play, though the game’s somewhat basic visuals do what is otherwise a well structured title a slight disservice.