Bayan is a new name in home audio – you’ve not heard of it because its first release wasn’t all that long ago. It has arrived with a bang, though, offering a quintet of iPod and iPhone docks priced between £79.99 and £299.99. The Bayan 7 sits right at the top, and is the first we’re wrapping our ears around.

At this level, the Bayan 7 has a whole lot of competition to fend off. The B&W Zeppelin Mini, Arcam rCube and Philips Fidelio DS9000 are all available for around the same outlay. And, boy, are they good. 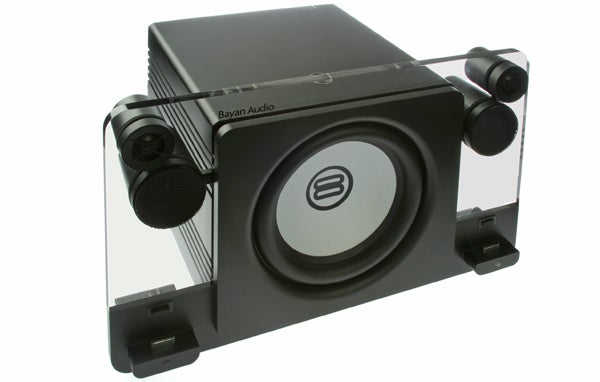 The design of the Bayan 7 is very different from the competition, though. Although lounge-friendly, it doesn’t strive to be small or wallflower-like, extending back almost 30cm. Why so big? Because this dock can be summed-up as a mid-size subwoofer and friends (said friends being the diddier drivers). No other docks at this price are quite so keen to show-off their bass credibility, and all five speakers are visible across its front.

You could go as far as to call the half-inch-thick transparent acrylic front a display board for the speakers. As an entry-level speaker, this design wouldn’t be all that notable, but here in the iPod dock big leagues, manufacturers tend to try to hide anything as vulgar as a speaker cone. The Bayan 7 comes across as a bit brash and abrasive in its “look how big my bass driver is” styling. It will likely divide prospective buyers, just as it has the TrustedReviews team. Drop us your Gok Wan-esque criticism in the comments.

Plunging a knife right into the aesthetic jugular as it does, it’s a little surprising to see quite how household-oriented the Bayan 7 is. There’s symmetry to its fascia, supplied by its use of dual iOS docks. These will charge two iDevices at once and act as two sound sources for the unit. 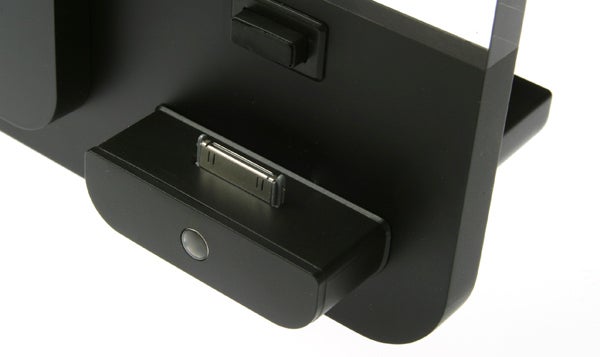 This dual-dock style is most useful to those who live in a Steve Jobs-approved Apple-loving family iHome, as singletons are less likely to own enough devices to fill the thing – the iPhone-iPad ownership combo is common, but the dimensions of the dock space mean Apple’s tablet won’t fit here. There are movable rubber rests on the rear of each dock connection, though, letting them comfortably house any other iOS dock device without risk of damage. 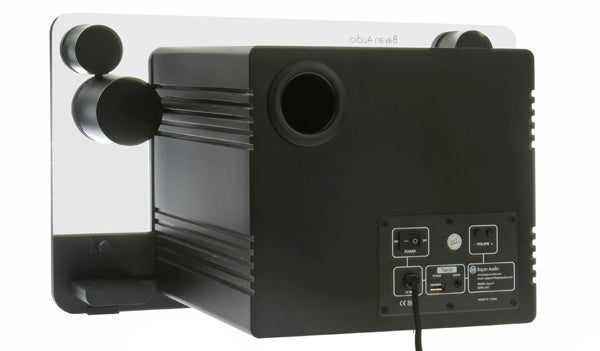 Bayan Audio has catered for iPad owners elsewhere. A USB port on the back will charge one, and there’s a standard 3.5mm audio input that’ll connect with the headphone jack of virtually any tablet, MP3 player or smartphone.  It’s a nice touch, and something that we wished more devices included. 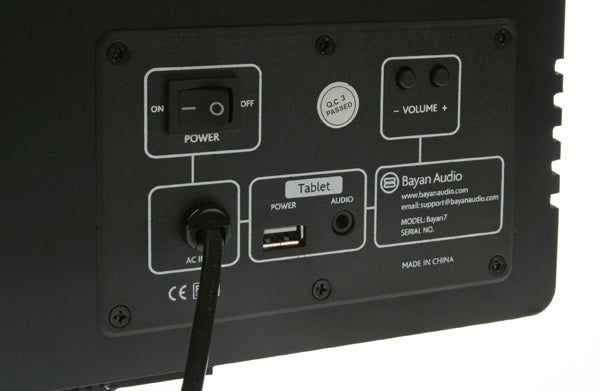 You switch between this trio of inputs using the supplied remote. Like the dock, it’s chunky and not quite the height of stylish sophistication, but it is way above average for a lifestyle audio product. It offers discrete rubber buttons, decent functionality and excellent build quality. You can access your iPod’s media library, change the EQ settings, and there are all the usual playback control gubbins. Very little of this can be controlled through the dock itself, just the volume – using a pair of little buttons on the back.

Next to most £200 iPod docks we’ve looked at recently, the Bayan 7 is very simple. It offers no internal radio and no wireless streaming – no Bluetooth and no Airplay. But this is something we rather like about its modus operandi. Simple is best is best. Simple as. 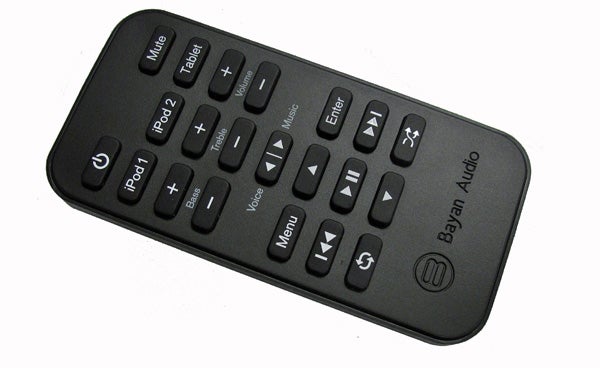 However, the Bayan 7’s design leaves us ambivalent. It packs-in plenty of drivers and has a distinctive style, but we don’t think it has the bold look to become the centre point of a room like the B&W Zeppelin Air, and it certainly doesn’t offer the portability benefits of a Bose SoundDock or Zeppelin Mini. Weighing just under 7kg, and with an awkward design that makes it difficult to hold and easy to break – thanks to that exposed bass driver – this is only a device to consider if you’re going to leave it in one place for most of the time.

The Bayan Audio Bayan 7 has five drivers – two 1in tweeters, two 2in mid-range drivers and the giant 8in bass cone. It uses dual amplifiers with 120W power in total. The subwoofer gets 60W to itself while the stereo pair get 30W a piece.

It’s not hard to peg the sonic strategy of the Bayan 7 from a quick glance. It’s a 250 x 250 x 300mm subwoofer with a selection of other drivers jammed-in to fill in the missing bits of the frequency spectrum. This 2.1 design is very common in larger iPod docks, but it’s approached more aggressively than usual here. 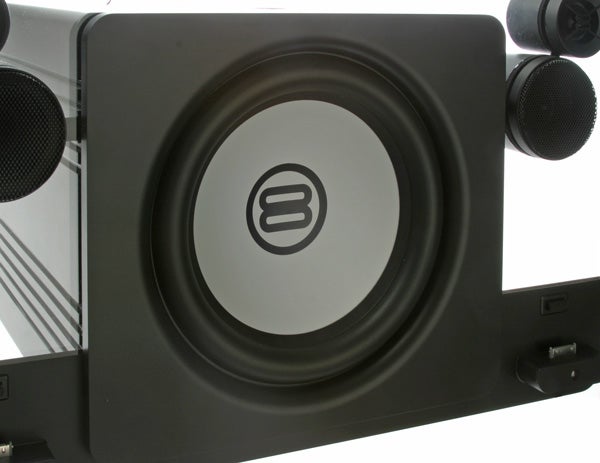 The 8in bass driver is much larger than the 5in cone of the B&W Zeppelin – itself recognised as a fairly bass-centric setup – and, commendably, this 8in monster is given a proper speaker cabinet. Extending 30cm deep and 12mm thick, you could mistake the central part of the Bayan 7 for a budget home cinema sub.

We found that using the default setting, the bass favouritism had a slight negative impact on sound. Although not seriously boomy like the earlier iterations of the Orbitsound Soundbar, its keen sub needs a little taming before something approaching a balanced sound is attained. Thankfully, it’s not hard to do. 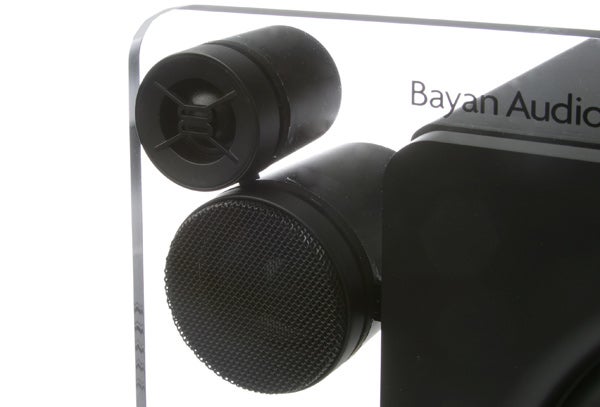 The remote control offers bass and treble settings, as well as Music and Voice presets – Voice rips out much of the low-end to improve spoken-word clarity and presence. There’s no screen to tell you what level each is currently at, so you have to rely on the little indicator light atop the unit, which doubles as a touch-sensitive power button. It turns white instead of blue when you’re in Voice mode, and flashes each time you alter bass and treble settings. Once you’re at the maximum or minimum of each, it’ll stop flashing.
You have to trust your ears here, but like its feature-lite approach,
this isn’t necessarily a bad thing.

Given a slight tweak of the bass, we were able to sculpt a warm, detailed and powerful sound out of the Bayan 7, one worthy of its hefty price. In a head-to-head with the Zeppelin Air and Arcam rCube, we found that the Bayan was the least insightful of the trio, but crucially they were comparable. In the dinner party of £300 iPhone docks, it’s not the most refined of guests, but it’s not woefully out of place either.

Having an 8in sub driver to call upon comes with benefits too. Few iPod docks can get a party rocking like a Bayan 7, and it’s capable of volumes most docks either simply can’t reach or struggle to reach, often resulting in a harsh sound. However, it’s not invulnerable. Up the bass a few notches and feed it some bass-heavy tracks and you will hear some low-end distortion. And for ultra, mega, uber bass heads, the 30Hz minimum frequency may not quite extend far enough to satisfy all your bass needs, but it comes pretty close. 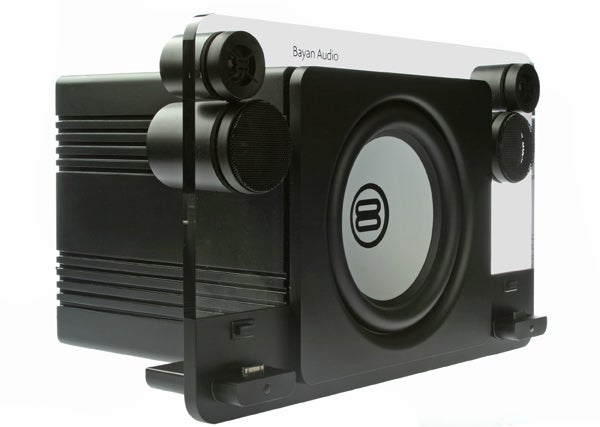 For those wanting an iPod dock to add some spice to a living room and provide soothing tunes, we’d pick the B&W Zeppelin or Philips Fidelio DS9000 over the Bayan 7. Both still cost a little more, but are frankly a lot more attractive and have a little more sonic class. However, if you also want to sometimes get the walls shaking for a house party, the 8in sub driver and reasonable pricing make the Bayan a fairly attractive option.

Verdict
A quick look at the Bayan 7 is telling. Its great big 8in sub driver commands centre stage, a position that it holds sonically too. However, unlike some bassy iPod docks, it retains decent sonic balance, especially following a tweak with the simple-but-powerful equalisation. Its particular skills are wasted if you’re only going to feed it polite music at polite volumes, though.