As the iPhone dock market has developed, new features have continually been introduced. Wireless streaming, integrated batteries, fancy controller apps and video screens have all done the rounds. The Bayan Audio 3 rejects all of these periphery features, focusing instead on producing a big sound for a small price. And while it’s not perfect, virtually no docks of this size and price pack as quite as much wallop as this little monster.

Design
The Bayan Audio 3 boasts a slightly unusual design. An amalgamation of power and portability, of clear compromises and surprising benefits, it’s at once familiar and something a little new. 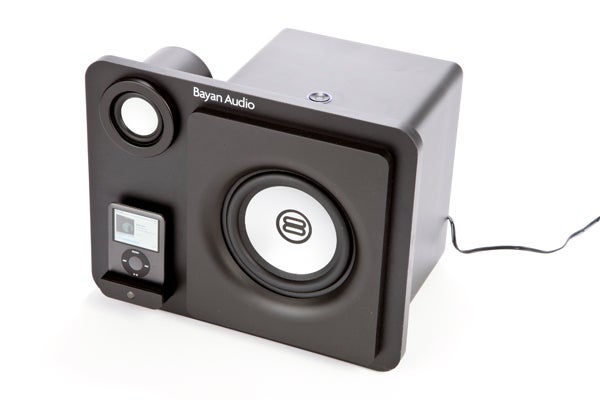 Size-wise, it’s a happy bedroom-sized unit. It extends back a little more than a bedside radio like the Logitech Squeezebox Radio, but is the sort of unit that’ll fit into rooms without too much re-arranging.

What’s impressive in a sub-£80 speaker like this is its use of sturdy-feeling materials. The Bayan Audio 3 is made up of two main parts, a hard plastic housing for the main driver and a 1cm thick slab of wood, making up the rest of the front. It’s a real step up from the glossy black plastic often seen in entry-level docks like this, and the use of a matt finish helps to give it a touch of classiness. 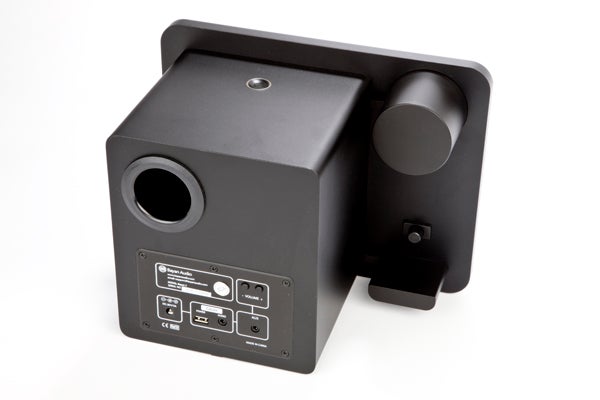 Yep, it’s basically some bits bolted onto a subwoofer

It also tempers the Bayan Audio 3’s brasher design elements. With exposed silver speakers, and an all-too-clear Bayan logo on the larger one, we can’t help but feel this dock could have been made all the more lounge-friendly with a design tweak or two. But compared with the larger Bayan Audio 7, it’s a real cutie. The one on-body control visible during normal use is the touch-sensitive power button up top, which glows blue or red depending on whether the dock is turned on or not.

Connectivity
The simple feature set of the dock rules-out needing a display. On its front, there’s a 30-pin dock designed to house iPhones and iPod touches – there’s not enough room to shove an iPad on here. However, tablets are catered-for.

Around the back, there’s a USB port and auxiliary 3.5mm audio input. Although not as neat a solution as an all-in-one dock port, this lets you charge and take audio from a wide variety of non-iOS devices, including Android tablets and phones. 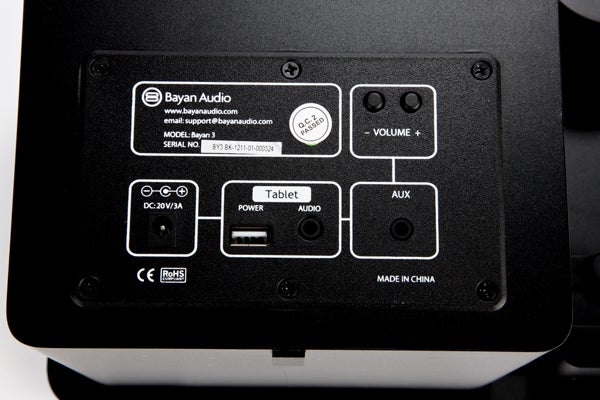 Note the manual volume controls on the rear

An unusually generous extra, the Bayan Audio 3 includes yet another 3.5mm audio input on the rear, giving a total of three devices that can be plugged-in at once. You could, for example, plug in your computer as well as a tablet and phone – although the speaker arrangement doesn’t lend the dock to work as an all-round computer speaker system. A 3.5mm-to-3.5mm cable comes in the box too (although ours started falling apart at the jack plug during testing). 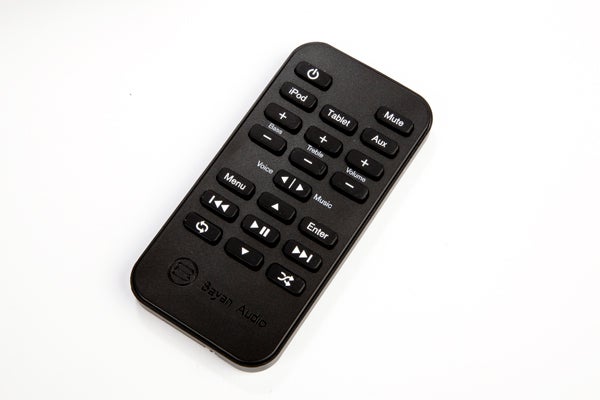 The supplied remote control lets you switch easily between these three inputs. This remote won’t strike you with its beauty, but it’s a very high-quality number for a sub-£100 dock. Instead of a generic credit-card size remote, it’s a chunky rubber-buttoned affair that gives you access to EQ, volume and playback controls, and also lets you navigate remotely through an iPod or iPhone’s menu system. The same remote used by the £300 Bayan Audio 7, it wins the cheaper, smaller dock a fistful brownie points.

Speaker Arrangement
The Bayan Audio 3’s speaker arrangement sets it apart from other iPod docks at the price. With just two speaker drivers, each taking on duties at different places along the frequency spectrum, the sound it produces is mono, but the bass driver is much larger than you’d usually see in a unit like this.

5.25in and responsible for the Bayan Audio 3’s significant 20cm depth, it takes up most of the unit’s mass. It’s basically a Hi-Fi subwoofer, shrunk down in size and placed front-and-centre rather than jammed into the corner of a room. 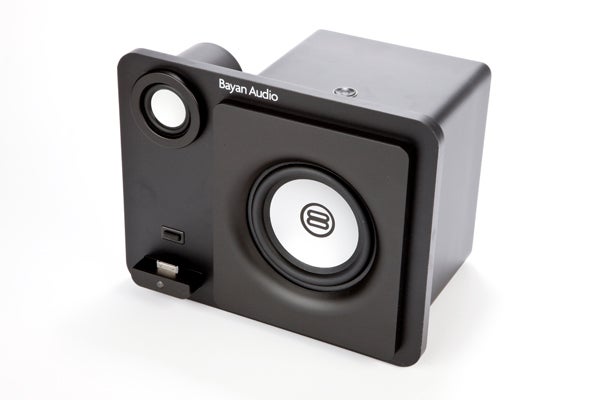 The other driver therefore has a big job ahead of it, responsible for all the upper-mids and treble legwork, it’s a 2in driver, with the same neat-looking silver “cone” as the bass speaker.  Although clearly a mono setup – itself the standard in devices of this size – Bayan Audio claims it supplies “pseudo stereo”, with a “wide stereo effect”.

While the Bayan Audio 3 merges the information from the stereo channels successfully enough, any claims of true stereo are clearly not really true – you can’t split what’s welded together. However, it provides what’s actually much more important in a speaker unit of this size: wide dispersion and scale. 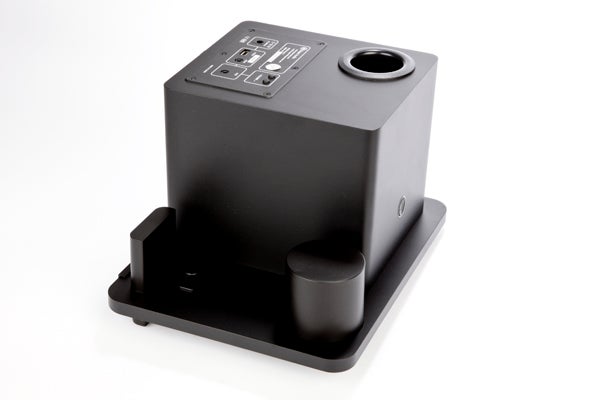 Packing stereo speakers into a 30cm-wide frame is certainly possible, but the stereo effect is going to be severely limited anyway. The Bayan Audio 3 instead offers a wide throw of its mono output, able to fill rooms much larger than its small size might indicate.

Sound Quality
In terms of scale of sound and maximum volume, the Bayan Audio 3 obliterates most of the similarly-sized competition. It’s all down to the large bass driver, which is actually a bit bigger than that of the B&W Zeppelin Air. Impressive, huh?

At middling and high volumes, the benefits of such a large driver are clearly evident. The Bayan Audio 3 simply doesn’t suffer from the diminutive “small speaker” sound that sub-3in lead drivers often create. And while it starts to sound strained at top volume, the 2in driver struggling a little, leading to mids becoming harsh – with some distortion evident in the mids and low bass) – it will fill most rooms with ease. 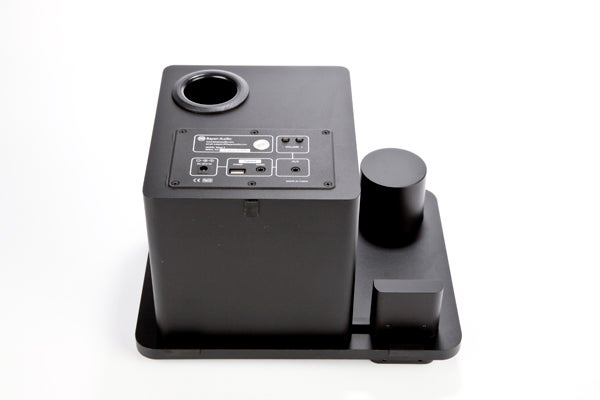 We found the biggest sonic problems cropped-up when the Bayan Audio 3 is quieter, rather than going all-out. At low volumes, the bass tends to dominate, bass guitars sitting on the face of singers in a way that wouldn’t affect more traditionally-arrayed audio docks.

You are given decent control over equalisation, though. There are dedicated bass and treble controls on the remote – although none on the dock itself – that let you minimise and completely over-do both. Bayan Audio also provides a couple of presets, dubbed Voice and Music. These are switched-between with yet another button on the remote – lose it, and you’re pretty much screwed.

Music mode is a touch on the bassy side, but between 40 and 60 per cent volume provides a remarkably fun and full-sounding tone. Voice mode strips out a lot of the low-end grunt, removing the bass resonance that can crop up when listening to spoken-word content in a low end-centric setup. It also removes most of the problems of bass dominating quiet listening. Unfortunately, manual equalisation has to be done entirely by ear, as there is no display to show you what level bass and treble are currently at. 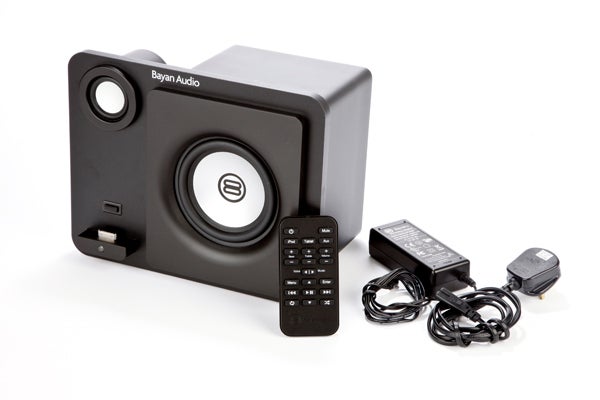 Like the Bayan Audio 7, some tweaking is required for best results, but if you want a big sound in a small, affordable package, this is a great buy. It even looks pretty good. However, if you’re only looking to fill a small room, or just want to listen at low volumes while cooking or chilling out in a bedroom, the Logitech S715i is a more flexible – boasting an internal battery – and easy-going choice.

The Bayan Audio 3 is a little dock capable of producing very big sound. With just two speaker drivers, it’s mono but embarrasses many other alternatives at this size and price. It is a beast that needs taming, with bass dominating at times, but the remote gives you control over EQ settings. If you don’t plan on upping the volume, you can get more refinement elsewhere, but there’s a lot of fun to be had for not much money here.