What is the Batwing Drone HD?

The Batwing Drone HD is a budget quadcopter from Propel, the company behind those fancy Star Wars battle quads.

There are two models of the Batwing Drone. The HD model reviewed here has a 720p camera on board for taking snaps and videos, and it costs £80. But if you’re not particularly bothered about filming your flight then a camera-free model is available for £30 less.

The Batwing Drone HD is a great way of living out that childhood fantasy of being Batman. It’s also an excellent starter drone for novice flyers – although some build quality issues mean you’ll need spare parts. In the right environment, though, this is a fantastic drone. 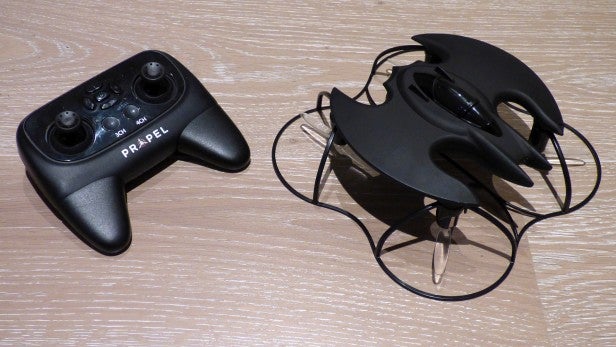 Propel has put plenty of effort into making the Batwing look like a tiny plane, rather than just attaching propellers to a Batman symbol. There are sections of the drone that look like they’re for streamlining, as would be the case on real planes.

I’m a fan of the glossy finish of the cockpit section, which stands out against the matte black of the rest of the model. It feels plasticky, and as a result a little cheap – but I imagine such a finish is necessary to keep the weight down.

Being a quadcopter drone, the Batwing requires four propellers to fly – eight blades are supplied in the box, in case you break or lose some. There’s also a propeller guard, which Propel recommends you use at all times. I’m inclined to agree, unless you’re that confident (or vain). 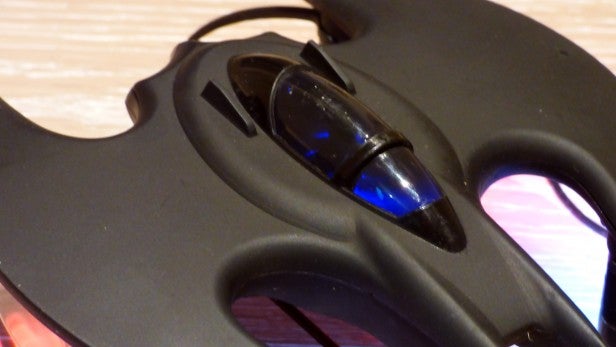 The drone is powered by a small battery pack, and inserting or removing it is how you turn the drone on or off; there’s no sign of a power switch. You get up to six minutes of flight time, and a full charge takes 60 minutes.

There’s a good-sized controller, well laid out considering the number of buttons available to press. It comes with small handles that you can attach for better grip, and you can switch out the default thin-metal joystick tips for fat rubbery ones too. The Batwing is very well accessorised. 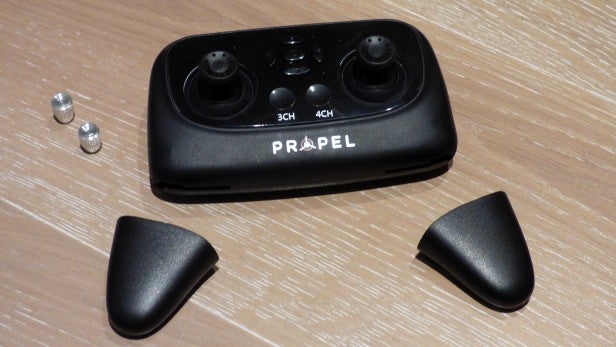 At its most basic, the Batwing flies and hovers. The left thumb stick on the controller adjusts elevation and yaw (but not pitch or roll), while the right stick controls the trajectory. This means you can move it up and down, rotate it, and move it forwards, backwards or sideways. There is also a “stunt” button: press this and the Batwing will do a barrel roll.

Besides flying, the Batwing Drone HD can also take pictures and shoot video up to 720p resolution. The drone itself doesn’t have any storage, but it does have a slot for microSD cards up to 32GB. You also get a microSD card reader for transferring your footage to your computer via USB.

The camera is just for recording, not live-viewing. There’s no app link to mobile devices, which means you must keep the drone in sight at all times. 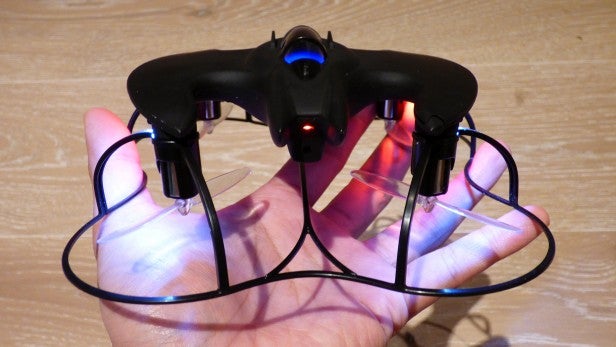 I really enjoyed flying the Batwing. The controls take some getting used to, but this doesn’t take too long. I’d pass on the “quick start’ guide in favour of the comprehensive instruction booklet, which provides instructions on how to calibrate your drone so that it doesn’t automatically start drifting into the wall. It’s crucial you do this – otherwise, you’ll crash before you know it.

Which leads me to the Batwing’s negatives… While you’re learning how to fly the drone, it’s inevitable that you’re going to crash. Why do we fall, sir? So that we can learn to pick ourselves up and tweak the settings. Sadly, the Batwing Drone HD doesn’t deal with the “falling” part well.

The propeller guard is flimsy and does little to stop the blades from hitting the floor/wall when you crash. Propellers will either ping off – good luck finding that in the park – or they’ll break. Following three low-speed crashes, I had lost one propeller and snapped two. 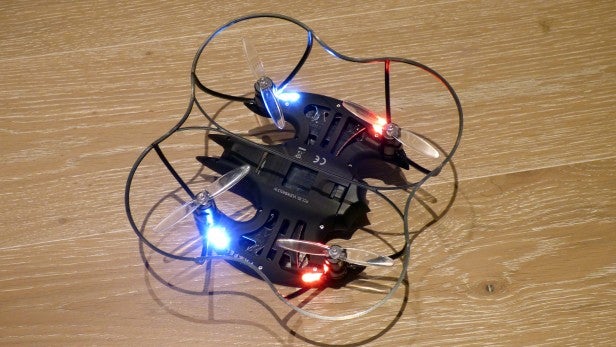 Basically, you’re going to need spares – but the number supplied in the box isn’t adequate; it won’t be long before you find yourself with a flightless ornament. To Propel’s credit, the customer service department is excellent – a nice man offered to send me spare propellers for free, with only a £2.99 charge for postage.

Sadly, it doesn’t end there. The Batwing’s lightweight plastic construction is rather flimsy, and I’ve already  spotted a crack in the chassis. This was merely a result of clipping a door frame during take-off and crashing down onto wooden flooring – I dread to think what it would look like if the drone had to contend with high speeds, a tree, and concrete pavement.

Picture quality from the camera, however, is decent – clear in good lighting conditions and about as sharp as you can expect from something that’s moving and vibrating. Footage does become noticeably grainier and noisier as the light becomes dimmer, though. 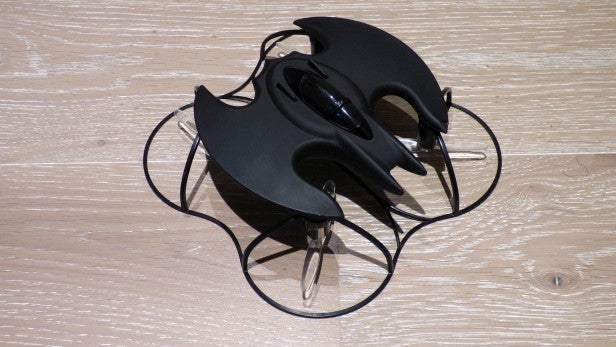 Should I buy the Batwing Drone HD?

If you’re a novice flyer looking to get into drones, or if you’re a Batman fan, the Batwing Drone HD is an excellent starting point. It looks the part, it has some great features, and it’s easy to use.

The build quality is a problem, however, and despite the good customer service, I fear for the drone’s longevity. Still, if you restrict yourself to an open field, where crash-landings can be softened by grass, you should be alright.

A fun, good-looking drone – while it lasts, that is.