I have rage quit Battletech several times now. However, this isn’t a bad thing; it means I’m being challenged, and I like that. But Battletech is difficult and requires patience and practice – and it demands a lot of your time. Each mission can take a surprising amount of work to complete. Add in some restarts and you’re looking at a long old game.

But in these days where a campaign on a AAA title is, perhaps, 12-20 hours, I feel that Battletech offers a lot of play time for your £35 (£45 if you also grab the DLC). By the time I was 12 hours in, I’d only managed a couple of campaigns and had just started to get to grips with the game. In this time, it kept me thinking throughout – and when I did quit, sometimes angrily, I always felt the nagging urge to jump back in. In that regard it reminded me of my days in Command & Conquer – some of my happiest gaming memories.

Like C&C, Battletech offers you a chance to try different strategies to win the game. It features a sophisticated and interesting control system and a level of depth with your gigantic fighting robots that lets you really get into the universe. It’s the depth that makes Battletech fun, but it’s also what makes it quite the challenge at times. 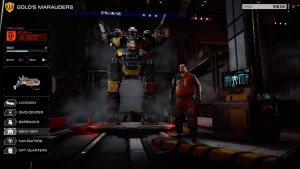 Starting up the game for the first time, I liked the way it was presented. Rather than pre-rendered cut-screens, the story plays out through drawings that are subtly animated. This is actually quite compelling, and while many of the big titles these days feature flashy introductions, the more low-key Battletech graphics make it feel like you’re enjoying a graphic novel. It’s a wonderful experience.

The game doesn’t go out of its way to explain itself to you. You’re thrown into a mission quickly, and the mechanics of how it all works aren’t always obvious. The more you play, the more you learn, but if you’re considering a purchase then view a couple of YouTube playthroughs first; it may help you learn about the controls far quicker than the game will yield its secrets.

There are two game modes to play. A campaign, which offers plenty of content and will no doubt see you screaming at your monitor for 50 hours or more. There’s also a Skirmish mode that allows you PvP action against either computer opponents, or online with actual people. These matches are usually simple enough, but they can help you scratch the Battletech itch in less time than most of the campaign missions, making them ideal for a little fun when you don’t have ages to play.

PvP, or PvC in my case, also proved to be a valuable resource for learning the game. It doesn’t have the pressure of a mission, and there isn’t so much at stake for a loss. As such, it’s a good way to study techniques you use in the campaign. 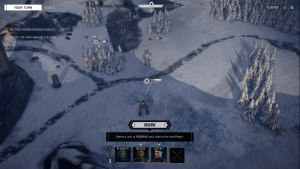 Visually, the game is interesting enough. It isn’t the most impressive I’ve seen. I set the game to maximum quality, and it’s reasonable, but not beautiful.

The big problem I found is the out-of-the-box camera angles. Playing the game isn’t affected, but on occasion, when you’re watching the enemy decimate your force, you’ll end up with the camera blocked by a mountain or something. It isn’t the end of the world, but it can be annoying. I also noticed that tank stomps don’t always show the mech actually connecting with the tank, but rather next to it. Hardly the end of the world, but a bit ’90s videogame’ in style.

However, you do have plenty of control over camera settings, and much of this can be turned off or tweaked to suit you better. This includes either reducing, or preventing entirely, the change in camera angle when you fight or jump. This all makes the game far more playable since it cuts down on wasted time.

One thing I noticed, and then went online to see lots of other people highlight too, was the sluggish way the game moves you through turns. There’s a lot of waiting for the other team to move, and even more waiting when the game does something or other in the background. This doesn’t bother some people, but it irked me.

There are some tweaks available to speed this stuff up, so if you really can’t bear it then there are some hacks out there that make it a little more tolerable. These are rough and ready, though, and do have some impact on how the game looks. For example, it will cause the visuals of the enemy attack to skip, so you’ll only see the damage done to you. This was fine for me, and it helps move the game a little quicker –handy when you’re reviewing on a deadline, but perhaps less of a problem if you’re just enjoying the journey. 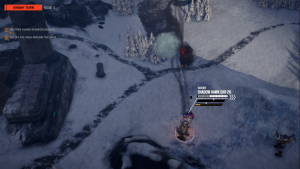 I’d say that the basics of the story are predictable. You get to choose your house and some character attributes as you get started. But the backstory itself is pretty standard fodder. You’re a lone operator, forced to sign up to fight. The banks are out to seize the ship if you default on your loan, and the interest payments are crippling. The only way out is to take on missions for money.

This all works fine, although I found that the financial pressure makes the game harder. You have to pay interest every 30 days and you also need to fix mechs once they’ve been in battle. Both are expensive and they take time to complete. So you might have to wait 100 days to get a mech operator back to health, and 40 or more days to fix the mech itself. That means several big payments and staff costs. This, I found, was perhaps the most annoying aspect of the game.

But again, the annoyance is a real challenge. Working within the budget makes the game more difficult – but then the sense of reward for managing it is higher. My mistake early on was to spend too much money on refitting mechs that I could have waited on. The early missions can be completed with fewer boots on the ground. This allows you to make more money, while not spending on more staff and repair costs.

It’s like a Katy Perry song, this one. You think you’re immune from its charms and then all of a sudden you’re humming it in the shower and singing while you drive. Battletech is so unforgiving and challenging that it really tickles the part of my brain that demands to win.

Although the game has some quirks and bugs that I feel should get patches – and may well do – it’s still fun to play. The AI is frustratingly good at being better than you, and it’s that challenge that has kept me coming back for more. Now, if you’ll excuse me, I have robots to punch with other robots.