Ever get the feeling a game is intentionally trying to confuse you, over complicating things a touch to try and pull the wool over your eyes? It feels a touch unfair to suggest that this was Kongregate’s modus operandi with BattleHand, but a distant feeling of disorientation is definitely a by-product of the game’s complex approach to the card battler.

Complex because, like a kitchen cleaning product that also boasts it can also be used to keep pets free of fleas, BattleHand is not just a card battler. No, it fancies itself as something of an RPG too, which means you get a whole lot of number crunching and upgrading all rolled into one perky little package. Problem is, unless you’ve got brain capable of handling multiple different calculations at once, it’s likely to leave your mind in a little bit of a fog. 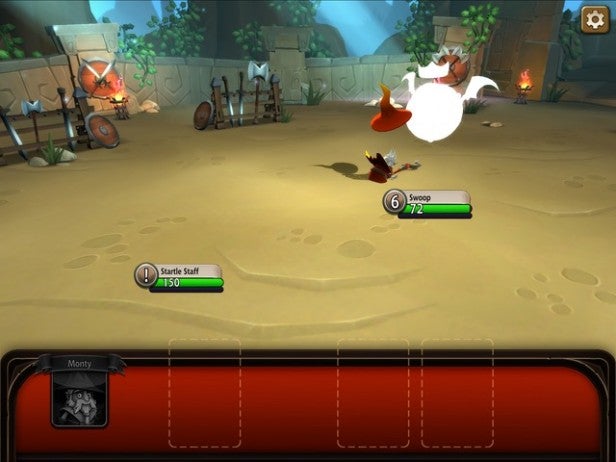 Indeed, forces throughout BattleHand seem to work against each other from start to finish. While credit has to go to the developer for the visuals, which – though generic – are delivered with aplomb, animations bringing the battles to some sort of life, the characters they’re shaped around are decidedly unoriginal. If we have to take on the role of yet another good wizard or cheeky elf while taking on a big eye with bat wings for a particularly uninspired appendage, we may just scream. Of course, when it comes to aping Tolkien and his ilk, BattleHand is anything but a loan offender.

Nevertheless, the idea is that you gradually band together a cast of different characters in order to take on an increasing array of creatures in turn based contests that, as you might expect from a card battler, swing between attack and defence from one turn to the next. BattleHand’s attempt at distinction in what has quickly become an incredibly saturated market is that it employs different elements that apply to both the cards and the characters themselves.

Like a convoluted game of rock, paper, scissors, coming out on top in BattleHand’s battles is a case of mastering Earth, Fire, Water, Spirit and Air, with all having their own strengths and weaknesses – a la Pokemon. Fire cards played by a fire character, for instance, will inflict more damage on an Earth based assailant, but are equally vulnerable to water cards. 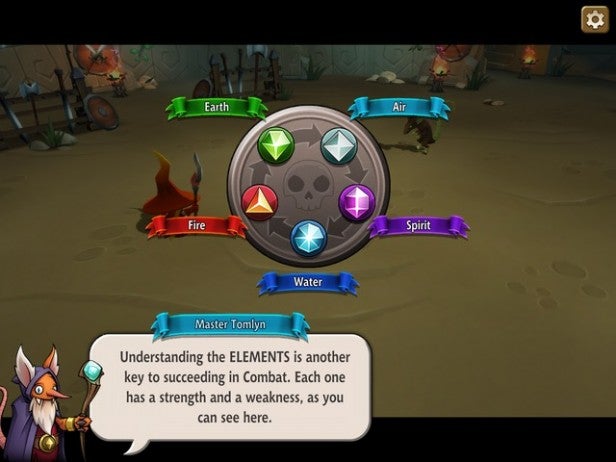 As such, BattleHand charges you with taking the right characters into each and every battle based on your opponents, which likewise means it’s important to upgrade all of them at roughly the same speed if you are to survive. This, however, is where things get a little complicated. BattleHand’s menu systems are ridiculously convoluted, evidenced by the fact that the rather obtrusive hand holding designed to guide you through a succession of different screens littered with bright, shiny buttons seems to last an absolute age. Whether it’s in the implementation or the sheer amount of measures BattleHand charges you with keeping track of, staying on top of things is simply no fun and stands in stark contrast to the relatively straightforward nature of the battles themselves. 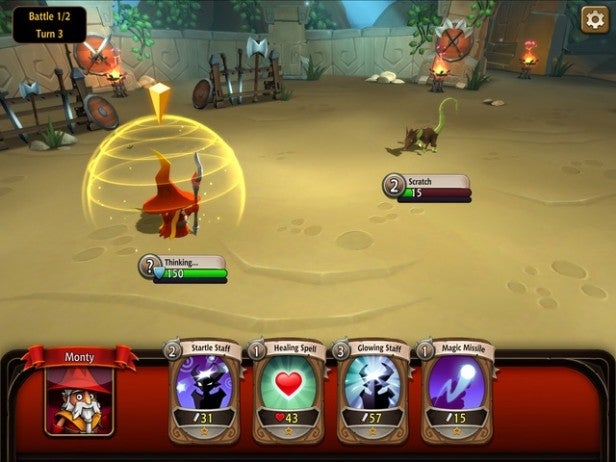 The biggest problem, however, is that none of this is especially new. Even taking into consideration the desire to merge the card battler with an RPG style format, this feels like an especially safe attempt to serve over a game that’ll tick over fairly nicely in a space already awash with games trying to do the exact same thing. If charged with describing a friend just why you’d picked BattleHand over any of the alternatives, the endearing animations that accompany the battles would be your only real reference point.

That doesn’t mean BattleHand is in any way bad, and for those that can get to grips with the menu screens, the battles themselves become just tactical as you’d expect from a card battler, with the focus on elements really coming into play. However, given this comes from folk who previously brought us Fable, it doesn’t seem unfair to have expecting something a little bolder, a little brighter, a little less sterile. BattleHand may have a lot of content packed into play, but it’s nothing we haven’t seen before. Many, many times before.

Verdict
Well presented but ultimately more than a little generic, BattleHand’s attempt to merge the card battler with the RPG is successful on the battlefield but a confusing mess elsewhere, with the more than familiar beasties it charges you with taking down as uninspired as the animations that accompany them are accomplished.