When Battlefield 2 launched on the PC last year it caused quite a stir – partly because it was a truly brilliant multi-player warfare simulation and partly because actually getting it to work could be frustrating, to say the least. I loved playing Battlefield 2, but what I didn’t love was constantly being thrown out of servers for no apparent reason, being told that I was running the wrong patch and waiting absolutely ages to get onto a ranked server in the first place.


It’s fair to say that Battlefield 2 pushed the boundaries of online first person shooter games, and the desire to make it to that next rank, or grab that next medal made gameplay pretty compelling. The ability to form squads also took things to another level, as did the appointment of a Commander. But although both the squads and Commander added extra depth to a well run server, most public servers are populated by players who have no concept of team work, and just want to randomly run around shooting anything that moves. 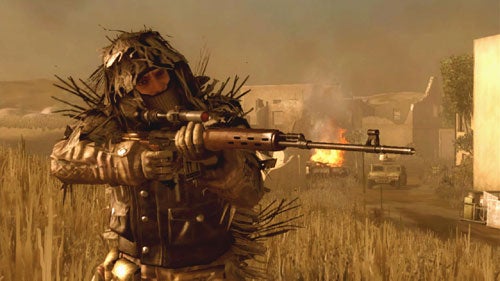 Moving a game as mammoth as Battlefield 2 over to a console platform was never going to be easy, but Battlefield 2: Modern Combat does a pretty good job. Although Modern Combat was released on the PS2 and Xbox last year, the Xbox 360 version has only recently broken cover, and while it’s probably not a worthwhile purchase if you’ve already got the PS2 or Xbox versions, if you’ve yet to experience the BF2 phenomenon, it’s well worth a look.


When you fire up Modern Combat you realise that it’s split into two parts – Campaign mode and Xbox Live mode. The Campaign mode tries to interject a single player angle into the Battlefield 2 universe – something that the PC version just didn’t bother with. To be honest the Campaign mode isn’t bad, and if you like single player squad based FPS games, you’ll get to grips with it in no time, although it plays more like Call of Duty 2 than Ghost Recon: Advanced Warfighter. 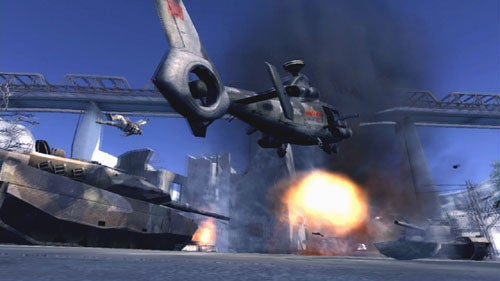 The coolest aspect of the Campaign mode is the ability to “hot swap” – this means that you can instantly switch between different troops in your squad at the touch of a button. So, if you’re playing a sniper hiding out on a rooftop and you see an enemy tank rolling towards you, you can quickly hot swap to an engineer and take the tank out with an rocket. Likewise, if you get killed, you will instantly hot swap to another member of your squad so that you can carry on the fight – this will happen continually until you actually run out of squad members and fail the mission.

The Campaign mode is a neat touch – not only does it add a decent single player experience, but it also allows novice users to hone their skills a little before having to face a server full of hardened mercenaries waiting to add them to their kill tally.


Realistically though, Battlefield 2: Modern Combat isn’t a single player game, that’s just not what it’s about. Just like its PC forefather, Modern Combat cries out to be played online, with real comrades and real enemies. So, what’s the online multiplayer gameplay like? Well it’s probably safe to say that Modern Combat offers the best multiplayer experience of any X360 title to date. 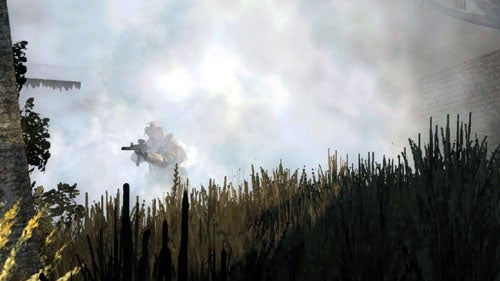 What really blew me away about playing Modern Combat over Xbox Live is just how seamless the whole process is. Connecting to the EA ranked servers doesn’t require the same arcane black art that was needed in the early days of Battlefield 2 on the PC. Hit the quick match button and within seconds you’ll be playing on a server, without having to worry about being kicked off randomly. At the end of each round all the players can vote for the next map, much like playing Counter Strike – so if you like a specific map, you can vote to keep playing it.


The maps are quite large, but nowhere near the size of the PC Battlefield 2 environments – this is partly due to the number of players, which is limited to 24 rather than 64 on the PC. This isn’t necessarily a bad thing though as it keeps things moving at a decent pace and has fewer instances of you wandering around a map trying to track down the action – something that happens all too often on the PC version. 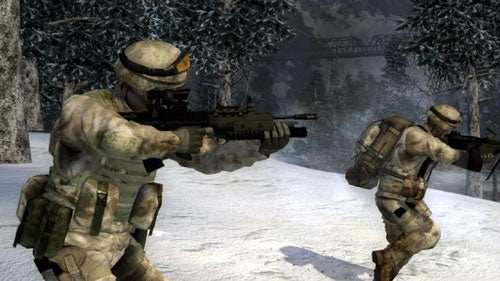 There are no squads and no Commander in Modern Combat, but I can’t say that I really missed those aspects. In fact the more simplistic gameplay of Modern Combat makes it easy to play as an individual, rather than trying to get a group of friends together as a squad, or go through the effort of joining a clan.


You’ve got a good selection of troop types to choose from – you can go for sniper, special ops, assault, engineer and support. Each type has a different selection of weapons and can perform different tasks. If you’re the loner type, then you’ll probably go for the sniper or perhaps special ops – you can take targets out from a distance with the sniper, or sneakily by being a special ops guy with his silenced weapon. The assault troop is your standard infantry grunt, with an assault rifle, complete with a barrel mounted grenade launcher. The engineer can repair vehicles that have sustained combat damage, while the support troop can heal injured comrades or even himself. 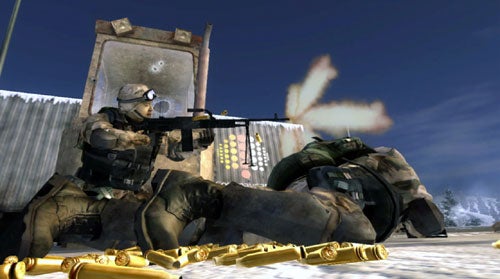 Although you can play a basic capture the flag scenario, it’s the conquest battles that you really want to get your teeth into. Just like the PC version, the point of game is to capture various points on the map and hold them – the longer your team holds these points, the more the enemy’s score is depleted, once either side’s score drops down to zero, the game is over. Individual points are scored for neutralising flag points and for capturing flags, while nailing enemy troops will also rack you up a score. 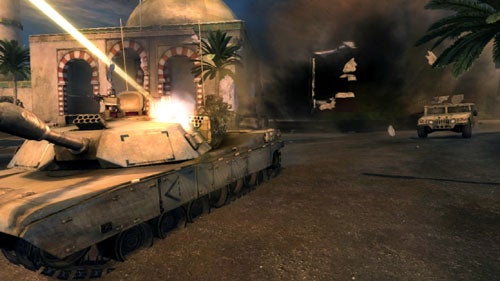 The beauty of the Battlefield games is that your score is continuously updated each time you play, allowing you to work your way up through the military ranks, thus giving you the means to lord it over all those noobs. But you need to do more than just rack up a score to get promoted, you also need to win the odd medal along the way by performing specific tasks – get four kills with one sniper rifle magazine (there’s only five shots in a mag), get 10 kills using the assault weapons kit without dying etc.


The graphics are a step up from the previous versions on the PS2 and Xbox. There are some good lighting effects with battles staged as the sun is going down – you really do find yourself squinting to try to pick out targets when looking into the sun. The lighting isn’t jaw dropping like in Ghost Recon, but it definitely adds to the atmosphere. Sound is good, but not astounding – because you’re unlikely to be playing a console game with headphones on, you’re not going to get the kind of positional effects that help you pinpoint enemies like you do on the PC. 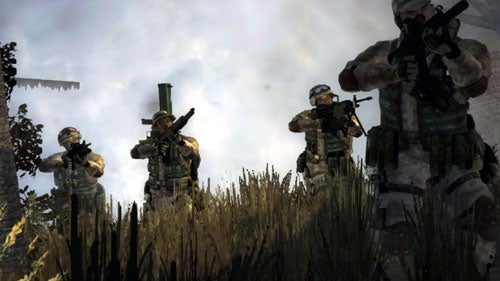 The control method is fairly standard console FPS fare and as always it can’t compare with the speed an accuracy that a keyboard and mouse will afford you. I often argue with PC gamers who refuse to play FPS games on consoles because of the inferior control method. To a certain degree they’re right – using a mouse, especially a high-dpi model, gives you supreme accuracy and speed when in the thick of battle, but you have to completely separate PC and console games, even if they are essentially the same title. Battlefield 2 on a console is a different game to Battlefield 2 on a PC and it has to be treated that way. Don’t whinge about how you can’t be as accurate or fast with the controller, just get to grips with it and enjoy a different gaming environment – after all, everyone else is in the same boat.

There are lots of vehicles to get to grips with along the way too, everything from tanks to jeeps to snowmobiles to helicopters are on offer. Learning how to get the best from the vehicles is a big part of Modern Combat – getting to all the neutral checkpoints first at the beginning of a round will bag you some easy points, while piloting a helicopter and taking out half a dozen enemy troops from the air will do your score and ego no harm whatsoever. Obviously some vehicles are far easier than others to control – don’t expect to jump into a helicopter and fly like Stringfellow Hawk straight away, but a little perseverance will get you nailing those targets without the need to have Ernest Borgnine riding shotgun. 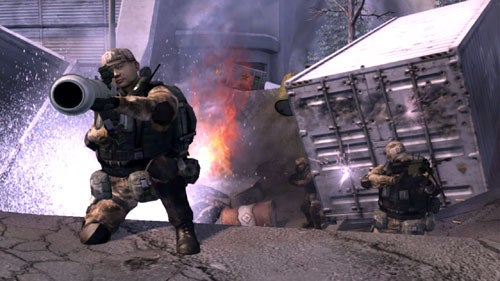 On the whole, Battlefield 2: Modern Combat works very well on the Xbox 360; partly because Xbox Live is so brilliantly implemented into the system and partly because the more simplistic gameplay lends itself well to a console platform. If you’re a regular combatant on the PC version, you might find Modern Combat a bit lightweight, but if you’re primarily a console gamer this will give you a taste of what all your mates with very expensive, high-end PCs have been going on about for years.


Battlefield 2: Modern Combat definitely gets my vote as the best X360 multiplayer game around, but that doesn’t mean it’s perfect. Even with the ranks and medals, there are many who may find the gameplay repetitive and mundane. That said, if you like the idea of being part of a large scale, 24 player combat zone, Modern Combat will definitely hit the spot.