Batman: The Telltale Series: Episode 2 – Children Of Arkham has been designed to keep you guessing. While the developer is skilled at taking a license and weaving multiple threads together, the early entries often suffer because you don’t get the whole picture till you’re a few episodes in. This is no different.

Much like in Realm Of Shadows you’ll be splitting your time between the Dark Knight and Bruce Wayne, both boasting separate narratives that shape your playthrough. With Children Of Arkham, it’s all about Bruce’s parents – of course – and The Penguin.

In order to keep relationships as strained and difficult as possible, Telltale has taken a slightly different tack with Thomas Wayne. Seemingly inspired by recent Batman TV show Gotham, Bruce’s dad is not the saint he’s been painted out to be elsewhere. In fact, there’s a much darker story in place, and it’s one that has ramifications throughout, not just because it sullies the Wayne name. 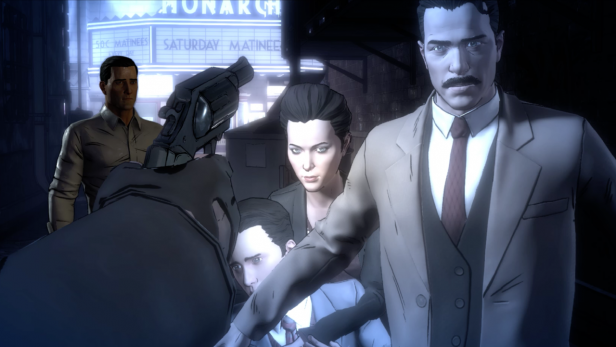 For starters, it instantly sparks tension between Bruce and Harvey Dent, the man running for office. Although Episode 1 was centred around Dent needing support for his campaign, these revelations about the Waynes have turned that on its head. Now it’s Harvey who has a sense of dread about who he’s associated with, and it’s a dynamic that plays out well. Are you going to try and keep him on side, or are his actions too much to bear? The choice is yours, and it’s one that will undoubtedly come back to haunt you down the line.

This concept is apparent throughout, with more significant characters getting twists that allow them to be more than just faces in the crowd. Alfred especially is not quite the man he was made out to be and Telltale does a solid job of keeping you on your toes and constantly questioning an individual’s motivation. There hasn’t been a decision so far that’s sparked any serious cause for concern, but it certainly feels like that’s what we’re building towards.

That does mean Children Of Arkham often drifts into filler territory, though – an episode designed to lay groundwork with little payoff. This is true of what you’re being asked to do, too, as there’s a lot less ‘game’ here than there was previously. Story has taken centre stage as opposed to giving you the chance to experience the lives of Batman and Bruce Wayne. It’s a shame.

The detective segments from Episode 1 weren’t perfect, but it’s a mechanic that should expand with each iteration. If anything Telltale has taken a step back from such things, focusing more on plot and characterisation – any future episode is going to have to nail both to stand out. The highlight of any Batman game is when a developer successfully manages to put you right in his boots, and unraveling a mystery or crime scene is a huge part of that. It’s what gives the character his edge. 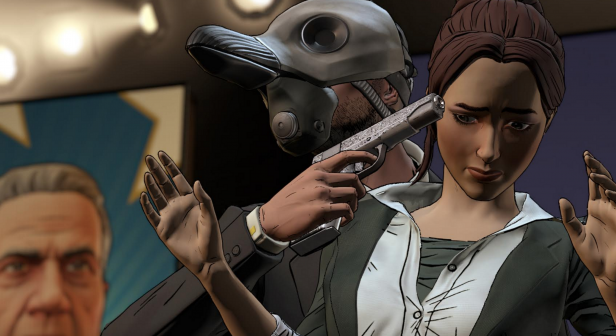 Here things are much more straightforward, with moments such as these serving as a way to change up the pace as opposed to presenting a challenge. They certainly work in that regard – and Telltale does show more ambition in one particular scenario – but the point-and-click adventure side of the developer’s work is a little lost here. A touch more would’ve been appreciated.

In terms of progression, however, by the end of Episode 2 you’ll have a good idea of where events are headed. There are hints galore that something big is on the horizon, and the arrival of the aforementioned Penguin in Gotham City is welcome.

Painted as a former friend of Bruce who’s lost his way, Ozwald Cobblepot is a far more complicated figure than you may first imagine, and Telltale deserves credit for that – and for even managing to make you feel sorry for him.

With that said, he doesn’t make as big of an impact as you’d assume a villain of his stature would – he’s more of a device for whatever’s coming next. Obviously it’s impossible to tell at this stage, as future episodes may change tack entirely, but those waiting for more famous faces may be a tad baffled by how The Penguin is treated here. You just have to hope that bigger plans are in place.

Children Of Arkham does build on the foundations laid by Realm Of Shadows, going for more of a slow burn than firing off surprise after surprise. If there’s a satisfying outcome in a few months then it’ll be a worthwhile wait, especially as Telltale does have a great understanding of not only Batman himself, but of the version of Batman it wants to represent.

If it leads to nothing, however, or can’t deliver on the plot development it hints at, there are going to be a lot of unanswered questions and, ultimately, some disappointment. Here’s hoping that everyone involved is up to the task.