We were hugely impressed by the first episode of Telltale’s Batman series, absorbed by the dark, realistic narrative and tighter focus on Bruce Wayne instead of his caped crusader alter ego. The stellar opening has us all the more excited for the second episode, which is set to launch worldwide on September 20.

Check out the new trailer below:

We’ll have a full review of the upcoming episode later this week, so keep an eye out for that. Read on to see what Games Editor Brett Phipps had to say about the debut episode.

Editor’s note: This review will contain no spoilers as to the major plot points in the game. There will be mentions as to the characters which appear, and it will only discuss the prologue in terms of specific narrative moments. We’ll be producing more spoilerific content as the series rolls on and you lovely people have had a chance to play it for yourselves.

Following E3, I was incredibly excited about Telltale’s Batman. Seeing the opening minutes, and the direction the studio was taking – a dark and mysterious narrative that focuses more on Batman’s alter ego, Bruce Wayne, and all the politics leading a double life brings – I could see a unique take on the Dark Knight in an era with more Batman than ever. After playing the first episode in its entirety, I’m confident this series has the potential to be the best Bruce Wayne story ever told – even if there are still a few obstacles to overcome.

It doesn’t take more than 10 seconds to realise this is a truly violent Batman story. The camera rolls and a security guard immediately gets his head torn off by a group of armed robbers. This is good – not that the guard has been iced, of course, but because the level of maturity delivered in all facets really helps make the narrative feel genuine.

Batman’s foiling of the heist is inter-spliced with scenes of Bruce Wayne dealing with the fallout of the conflict. Alfred – a character so perfectly performed that I want him to be my grandad – is nursing Bruce’s wounds and pulling shards of glass from his abdomen, but Wayne’s resilience remains. Seeing the strain caused by being the hero Gotham doesn’t deserve but needs immediately sets up the duality of the game: your actions as one will have dire consequences for the other.

As Bruce, following the heist, you’re forced to put a brave face on and walk into Wayne Manor to support Harvey Dent’s mayoral campaign, of which Wayne is the primary financial supporter. The dinner party at the Manor will involve chatting with potential supporters and financiers. Your dialogue choices will affect how much support Dent gains, and also how much the DA trusts your ability to get him the seat. All is going smoothly, but then a moment happens that’s so powerful it’ll drag you to the edge of your seat. 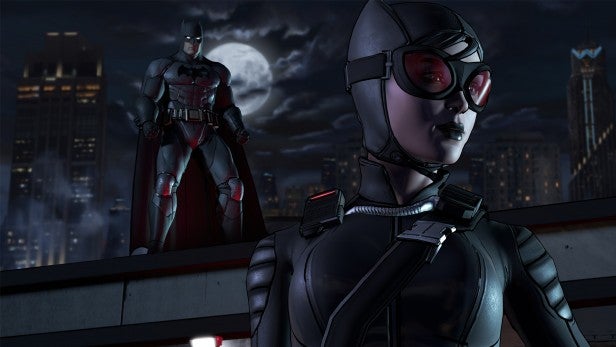 During the party, Carmine Falcone shows up, an uninvited guest. The other attendees, prominent journalist Vicki Vale chief among them, note the gangster’s presence, questioning the motives of both Wayne and Dent to associate with such a prominent criminal. Falcone meets Bruce, extends a hand, the whole room stares. It is up to you whether Bruce shakes the hand or not, and risks the ire of Gotham’s elite, or the wrath of its biggest baddie. It’s chilling.

The two then undertake a private meeting full of political power plays. Bruce can either submit to Falcone’s demands, like chalking his pool cue (as phallic as it sounds), and become an implicit part in his dodgy plot to get Dent the mayorship, or reject it and put his life in danger. However, as brilliant as this sequence, and many others like it are, the dialogue choices are a bit too murky.

For the first time in a Telltale game I felt like there was no clear right or wrong choice. Every decision had no black or white, just a perennial grey. This was excellent, but what clouded the situation further was having to play the dual roles of both Bruce and the Bat.

When offered the choice of teaming up with Falcone as Bruce, my first thought was to accept and gain intel to then use to take down Falcone’s operation as Batman. Much like how, in The Dark Knight movie, Bruce Wayne does a business deal with Lau to get a look at his accounts to bring down Falcone and his gang. But this is my thinking – I didn’t know if this plan was actually what the choice meant. You can’t foresee the consequences, or Bruce’s thinking, when making these key decisions.

This is the first time such a dilemma has been faced for Telltale. As Clem in The Walking Dead, there are clear pros and cons to most of the key choices. While not all ramifications are immediately obvious, you have a decent sense of what could and should happen. The consequences are Clem’s alone to deal with. In Batman, you are playing as two personalities, the decisions of one affecting the other – but how exactly is never known. I hope that, in future episodes, decisions that spread to both man and Bat are a little clearer, much like how in the Sherlock Holmes games the master detective talks through his thought process before presenting the player with a choice. 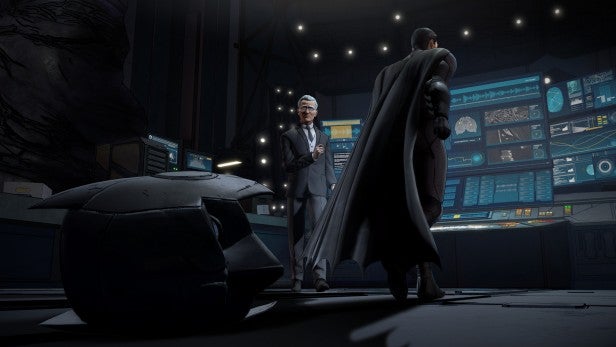 There is one other slight issue with the game, which is something inherent with the Telltale formula, but also a sign of how brilliant a job the team has done with Bruce Wayne as a character. And that’s that the action-driven Batman sequences are simply nowhere near as interesting as the dialogue elsewhere.

The classic QTEs return to handle much of the combat, this time with a new “Ultimate” meter, with successive successful inputs filling the bar that allows you to take out your enemy with a finishing blow. This is all fine, but I’d much rather just watch Batman do his thing and be tasked with handling the chatter. The QTEs end up just distracting from the action, which all looks gorgeous thanks to the stunning upgrade the graphics engine has been given.

Detective Mode is also present, but while its implementation faithfully replicates what fans are familiar with – particularly those who’ve played the Arkham series – there’s a disappointing sense of inevitability. As you walk around a warehouse, trying to retrace the awful events which have taken place shortly before your arrival, you’ll be asked to link different clues, with correct links creating holographic video segments to tell the story.

If you make incorrect links, Batman will simply have to try again and find the right one. It’s a shame that Detective Mode in this instance simply goes through the motions and the player can’t do much wrong. Considering this is a game about choice and consequence, I hope the mode develops so players can actually make the wrong conclusions or even finger the wrong perp, creating disastrous end-game results. 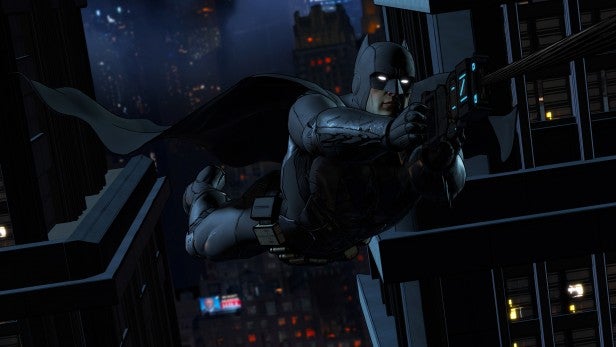 In typical Telltale fashion, you’re delivered a fiendishly teasing twist at the end that already has me speculating about where the series can go in episode two. But the good thing is that this will not be a series where the crook just gets away at the last second. Rather than be a series where Batman always feels a step behind an ever-elusive bad guy, Telltale has instead opted to have new and intriguing foes to take on with each episode. A consistent political undercurrent tied to Bruce’s backstory, and how his parents weren’t all they seemed, adds further intrigue to the plot that I can’t wait to explore in episode two.

We meet several familiar faces in this episode: Falcone, Catwoman (which includes one of the best subtextual conversations with Selina Kyle you’re likely to witness) and Oswald Cobblepot, though not how you’ve ever seen him before. I can’t wait to see how these characters evolve throughout the series, and with it all set to be told before the year’s end, we’re in for a treat.