Available on Xbox One, PS4 (version tested)
Up to a point, this Batman compilation couldn’t be easier to recommend. Comprising the first and second games of Rocksteady’s Arkham series plus all their DLC, it’s a great way to play two of the finest superhero action games ever made. You might note that third game, Arkham Origins, isn’t included, but given its origins with a different developer and its underwhelming reputation, that’s arguably no disaster.

Playing Arkham Asylum again, you’re reminded why it had so much impact first time around. Here was a Batman game that wasn’t trying to wrap the Dark Knight around an existing template, but that tried to wrap its style and gameplay around the Dark Knight. So, we get a game that’s part-brawler, part Tomb Raider-style platform adventure, part stealth game and part puzzler, where the fluid combat and the emphasis on analysis, subterfuge and strategy plays perfectly into what we always wanted from a Batman game, but didn’t know to ask. 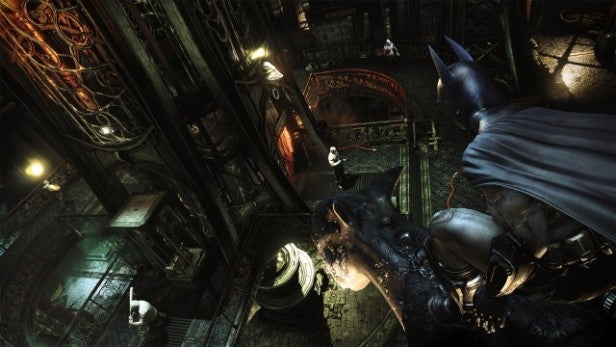 It remains a hugely atmospheric game, still tighter and more focused than its sequels. The premise, with the Joker taking over Arkham Asylum and up to something fiendish, is a composite of earlier Batman tales but none the worse for it, and you have to love the way Rocksteady works in a wealth of background lore, particularly through the Bioshock-style chronicles and recordings. Several great Batman villains, including the Joker, Bane, the Scarecrow, Harley Quinn and Killer Croc, all get their chance to shine, and there’s enough delving into Bruce Wayne’s psychological state to keep things interesting. Whether you’d only experienced Batman in the movies or spent years following him in the comics, this remains a version of the character you can recognise; one that wasn’t going to pussyfoot around the darker elements of the character or his world.

It can be violent and brutal, and nowhere more so than when you’re fighting. The combat system, heavy on carefully-timed counters and combos, would go on to influence an array of games, including the most recent Assassin’s Creeds and Shadow of Mordor. I’m not sure any of them have matched the speed, responsiveness or brutal impact; the final, slowmo kick or punch of every skirmish remains a thing of wonder even today. To this, Arkham Asylum added Batman’s predatory fighting style, encouraging you to move quickly, grapple up to the gargoyles, swoop down to batter isolated goons, sneak through vents under the floor then pop up for a surprise attack. Because you nearly always face overwhelming numbers and, later, heavily-armed foes, fighting smart – indeed, fighting like the Batman – becomes the only way to go. 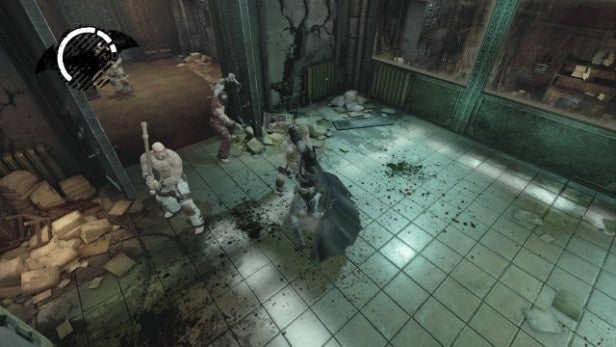 Most of all, it doesn’t forget that Batman is and always should be a detective. The Detective Vision – influenced by Assassin’s Creed then going on to influence the Tomb Raider reboot – plays a big part in this, but Arkham Asylum also has you analysing the environment for clues then making you follow them. It has strong puzzles, great gadgets, lots of hidden collectibles and those fantastic, nightmarish Scarecrow sequences where only strong nerves and a cool head will keep Bats alive. It has some off moments, some elements that feel obtrusively video-gamey, not to mention the odd tiresome boss battle, but in general it’s every bit as brilliant now as on the day that it appeared.

Arkham City loses a little of the focus and strong atmosphere, but makes up for it with scale and breadth. Even if the whole Arkham City concept seems a strange idea – would any city really give over its most important districts to a maximum security prison? – It turns out that going open-world works brilliantly, playing into all those masked vigilante fantasies that every Batman fan carries around. Gliding and grappling around the rooftops is fun in and of itself, swooping down to tackle gangs of goons in fast-paced flurries of kicks and punches, while the side-missions, particularly those where you investigate Deadshot’s killings and race to halt another Victor Szasz murder, do a great job of disguising the fact that Arkham City’s Gotham isn’t exactly the busiest open world around. 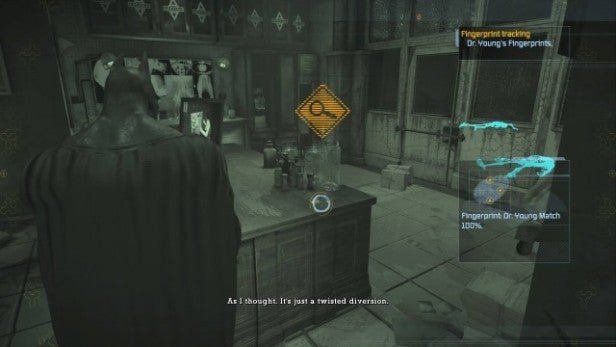 Yet Arkham City still packs in a compelling plot and a series of fantastic, carefully-orchestrated levels; the early section in the Steel Foundry with the Joker’s gang only sets you up for the magnificence of the Penguin’s museum HQ later on. If Arkham Asylum borrowed from Bioshock in its mix of period style, decay and industrial architecture, Arkham City blossoms with more luxurious interiors, weird and unsettling spaces, rich colours and neon glows. This is the work of a design team at the top of its game, even finding new ways to depict beloved characters, particularly the Penguin, who’s never been darker or a more believably vicious criminal.

There are more gadgets and they’re better used than in Arkham Asylum, with the remote-controlled baterang and remote charge-gun featuring in some particularly smart puzzles. Rocksteady also mixes things up with the combat, throwing in elements that push you to take-out guards and patrols faster without an alert being raised. The gadgets seem even more a natural extension of the Batman; you start using the baterang and batclaw more in battle, while the charge-gun can be hilariously effective in certain key stretches of the game. 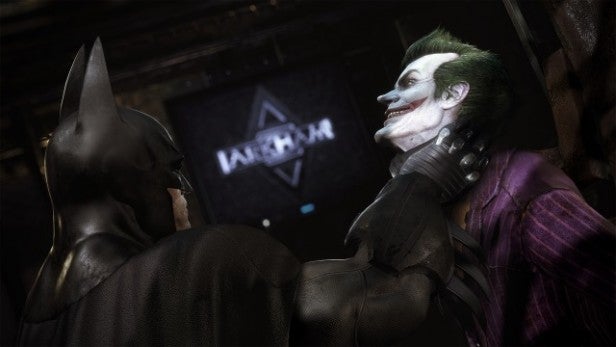 Finally, it’s impossible to talk about any of the Arkham games without mentioning Mark Hammill’s pitch-perfect performance as the Joker. Kevin Conroy is solid as the Batman, delivering his lines with the required punch and growl, but Hammill’s run as the Joker is arguably the definitive version, not just in games but across all mediums. Capturing every drop of the Clown Prince of Crime’s sadism, intelligence and sheer insanity, he plays a massive part in gluing the whole tale together. Kudos, too, to an unrecognisable Nolan North for his Penguin and Corey Burton for his Hugo Strange.

These are undeniably great games, and if you haven’t played them before on PC or the last-gen consoles, now’s a good time to do so. All the same, we’re getting used to remasters that feel like a definitive edition of the game; a version that’s a clear visual and technical improvement over the original releases. Think The Last of Us: Remastered, Uncharted: The Nathan Drake Collection, Gears of War: Ultimate Edition. With Return to Arkham, that’s not really the case. 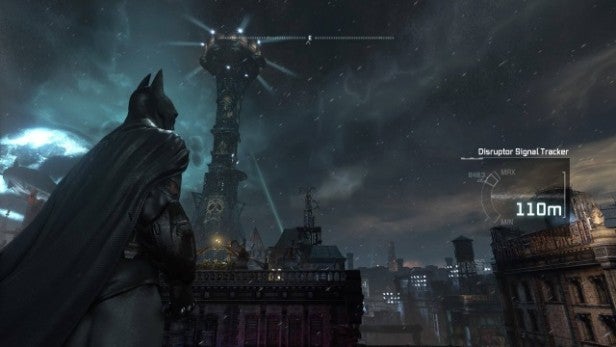 There are some obvious improvements. Updated from the Unreal 3 engine to Unreal 4, both games now run at 1080p and have some higher-resolution textures, most visible in clothing, some of the décor and the Batman’s costumes. However, both games are stuck at 30fps and, in Arkham Asylum’s case there are some weird, intermittent frame drops going on. These aren’t that noticeable or game-breaking in any way, but they’re slightly irritating in a remaster of a seven-year-old game.

What’s more, there seem to have been changes to the lighting model which make both games a little less gloomy and a little brighter. Sometimes, particularly in Arkham City, this is an improvement, but at other times it just draws attention to the comparatively primitive scenery or some textures that seem to have crept in from the last-gen version. Finally, it’s a real shame that the facial modelling and facial animation hasn’t been redone, especially in Arkham Asylum, where the stilted motion and inexpressive faces don’t really do the voicework justice. 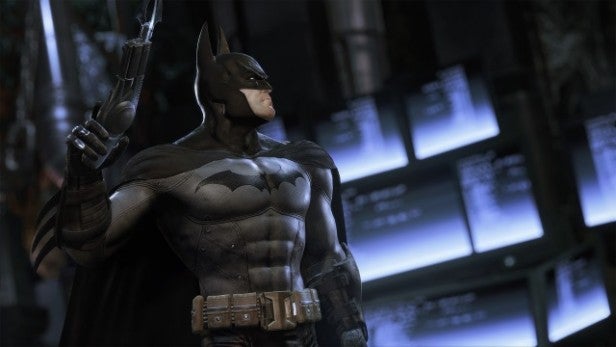 Don’t consider these points a deal-breaker for the new collection – we’re still talking about some brilliant, impressive-looking games. If you have a PC, however, then you already have access to the definitive versions – the originals – and they’ll only cost you £15 apiece on Steam.

Verdict
On the one hand, it’s a shame that a little more love and care hasn’t been expended on making Return to Arkham the definitive edition of these two classic games. On the other, both still look fantastic and both richly deserve their existing reputation as classics of the last console generation. In fact, both in serious contention for the title of best superhero game of all time. If you have a PS4 or Xbox One and didn’t play the originals, play these. Just be aware that, if you did, you’re not getting a substantially superior experience.