Available on Xbox One, PS4, PC (PS4 and PC tested)
Movie and game sequels suffer from a similar problem: when you have to keep going bigger, better and even more epic, how do you keep things moving forward without the latest entry collapsing under the accumulated weight? Opinions differ on whether Christopher Nolan’s The Dark Knight Rises managed to avoid the pitfall, just as opinions differ over this year’s Avengers: Age of Ultron. In games, the Assassin’s Creed series seems mired in exactly this issue, and the same has been true of Call of Duty, Splinter Cell, Halo and even FIFA in the past.

You can feel the weight on Batman: Arkham Knight, but Rocksteady’s third and final Arkham tale wears it as lightly as Batman wears his latest armoured, gadget-laden suit. This isn’t just the biggest of the three Arkham games, but the smartest too, improving and expanding on the open-world style of Arkham City while replicating the immersion and expert pacing of Arkham Asylum. It’s not quite the perfect Batman game, but it’s pretty damn close. 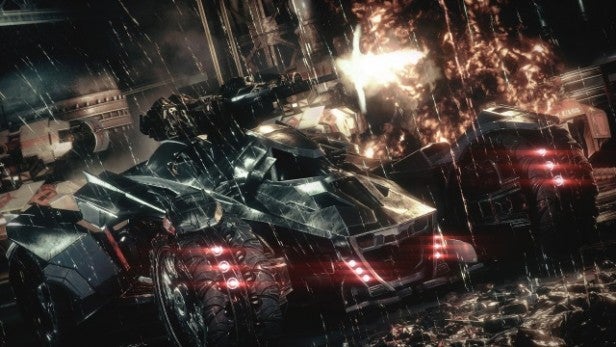 Let’s get the big new headline features out of the way. For the most part, having the Batmobile on call for most of the game enlarges the action, throwing in some awesome action movie chase sequences and giving you a great, fast method of getting from A to B. It has a battle mode, where it turns into a hovering, strafing tank, plus a remote control option and its own suite of gadgets, including an ingenious grappling winch that powers some of Arkham Knight’s strongest puzzles.

Driving it is a blast, diving into it from the rooftops even better, and hurtling out of it then glide-kicking an enemy better still. The one downside? Rocksteady can’t resist the urge to throw in larger and more epic battles against multiple tanks, with some seriously monotonous skirmishes spoiling the latter half of the game, and a tedious stream of side missions to complete on top. A little tank action goes a long way, but this is Batman, not Battlezone, OK? 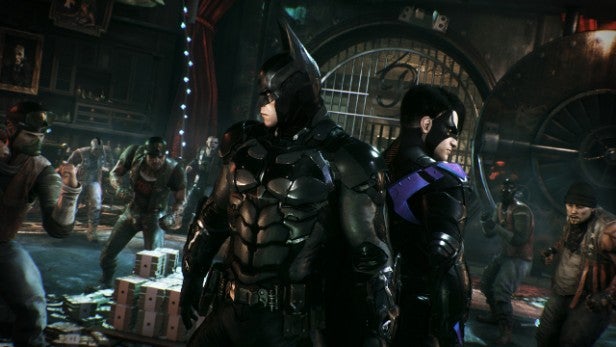 The other biggie is a greater emphasis on the wider Batman family, with Barbara Gordon/Oracle at the heart of the story, and key moments for Catwoman, Nightwing and Robin for special dual-hero dust-ups. Here you can not only switch between heroes while fighting hordes of goons, but call in special dual attacks which see both heroes working together in a killer combo move. These sequences are nicely done, but short, and don’t add all that much to the fabric of the game.

In other respects, you might say that Arkham Knight is business as usual. Combat works in much the same way before, with a brilliant, super-fluid system based on well-timed counters, gadget-based attacks and takedowns. The range of options is frequently bewildering – thank goodness for the button prompts thrown up in the corner of the screen – but there’s something incredibly satisfying about taking down a horde of bad guys in a flurry of hard-hitting blows. Meanwhile, the Fear takedowns give you a new way to tackle groups of enemies – one that rewards upfront strategy and skilful play. 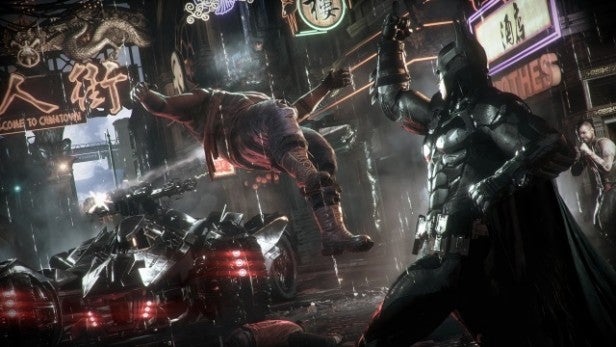 Detection also holds its place, with crime scenes to analyse, trails to follow and bodies to scan, all requiring a modicum of intelligence and the use of Batman’s gadgets. It’s all fairly basic stuff when you actually stop to think about it, but while it’s going on it’s weirdly compelling, and a nice change of pace from the action-oriented norm. Traversal, meanwhile, is barely changed from Arkham City, so there’s a lot of grapple gun-assisted gliding, climbing and sneaking through ventilation systems going on, as well as the all-new Batmobile stuff.

The progression system reflects all this complexity, with different upgrade trees for combat, the Batsuit, gadgets, the Batmobile and more, giving you a huge range of different builds for your own Batman, not to mention a dizzying repertoire of devices and button combos to master and remember. It threatens to grow unwieldy, but never quite crosses the line. Arkham Knight has depth, but never feels inaccessible. 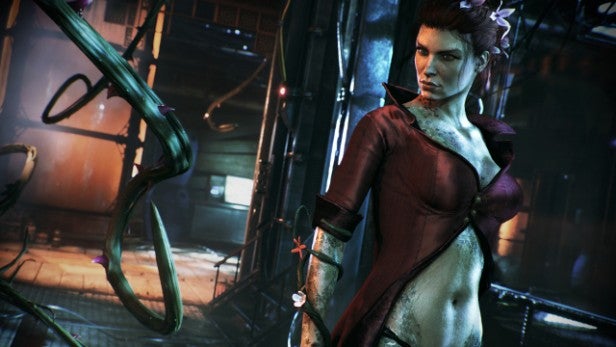 Still, this isn’t an experience defined by the tickbox stuff, but by the way Rocksteady manages story, structure and location. The latter is all-important. The Gotham of Arkham City sometimes seemed like a string of mission zones glued together by a collection of generic buildings and rooftops. It had personality in the interiors, but not always outside. The Gotham of Arkham Knight is richer, denser and more engaging. There are echoes both of Arkham Asylum and BioShock’s Rapture in its 1940s-meets-Gothic style, and the same consistency of vision. With more going on at street level, it might not have the population of GTA 5’s Los Santos, but it teems with life.

Rocksteady has been smart with the structure, too. Batman has an awful lot on his plate during the long night portrayed in Arkham Knight. Not only is The Scarecrow threatening Gotham with a new toxin, causing the whole populace to evacuate and criminals to run amok, but there’s a serial killer leaving bodies around the city, a fire crew to find and rescue, a feline-loving friend in need of assistance, and the Riddler causing grief. And that’s just a sample of the multiple activities and storylines running through the game. The titular knight, identity unknown, lies at the heart of all this stuff. 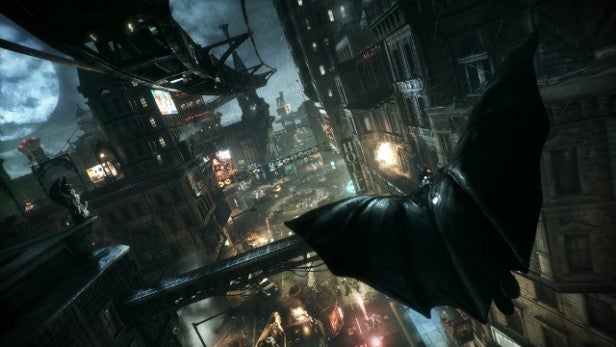 The game’s genius lies in the fact that all the missions and side missions feel like key parts of the overall experience, rather than icons on a map to be polished off, and that new activities in each crop up sporadically rather than hitting you all at once. You move from one to the next organically, occasionally opting between two or three choices, but it never feels like pointless donkey work.

The visuals on PS4 are astonishingly good. We can pick faults in the stilted facial animation, but the detail in character models and textures, the neon-heavy lighting, the dazzling rain effects and the sheer amount of action onscreen have to be seen to be believed. Needless to say, things aren’t so good on the PC front, where our quad-core Xeon/Radeon 285 setup struggled to deliver a smooth experience even with detail levels set to minimum and the resolution reduced to 720p. In the Batmobile or on the open streets, the game is pretty much unplayable. Warner Bros have taken the PC version off sale for now, and will hopefully only put it back on the shelves once this miserable situation is sorted out. 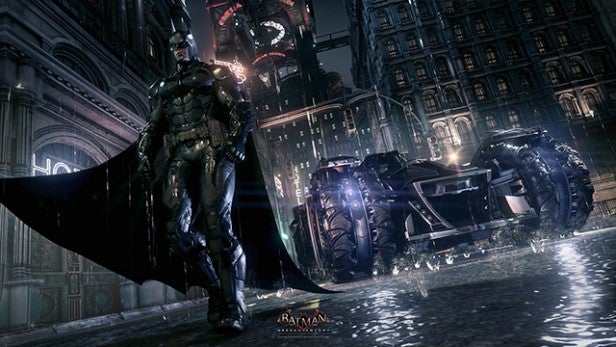 Most of all, Arkham Knight succeeds because it delivers such a powerful, compelling experience of a night in the life of The Dark Knight. Not every development in the central story has the impact Rocksteady hoped for, or even rings true, but this is a game full of strong, risky, pull-the-rug-out moments – and one that works to engage with Batman’s psychology and rich background lore. The more the game moves on, the more you can feel it building on the themes of Arkham Asylum and continuing threads that felt lost in Arkham City, cementing the three games together as one body of Batman art.

Everyone has their own vision of Batman, and yours might differ from the one presented here. I’d admit that mine isn’t so big on Batmobiles and gadgets, and wouldn’t feature the extended family, but it’s still hard to object to what Rocksteady has delivered. If Arkham Asylum set a new high watermark for the superhero game, then Arkham Knight redefines it while also leaving other open-world superhero games in the dust. By any reasonable standard, it’s a stone-cold classic.

It this is the end of the Arkham series, Rocksteady leaves it on a high note. This is an even bigger and more epic game than Arkham City, but one which luxuriates in the details and doesn’t lose track of what makes the Dark Knight such a powerful protagonist. We could pick faults in the tedious Batmobile battling or the way the gameplay hasn’t evolved, but that wouldn’t do the game justice. Powerful, thrilling and ambitious, this is one of the best games on PS4 and Xbox One.