Such is the general love for Batman: Arkham Asylum, that there’s almost no need to say that it’s the best Batman game ever and one of the finest superhero games of all time. Where other superhero games seemed content to take a hero and shove them in whatever genre – platformer, brawler, stealth action game – was the flavour of the month, Arkham Asylum was built up around the character. Its mix of stealth, close-combat and puzzle solving was ingeniously thought out, and it had a superb, weird take on the Batman mythos that drew on the work of Miller, Dini, Loeb and Lee and Morrison and McKean without slavishly recreating any of it. Most of all, it had an incredible atmosphere; the sense of place and twisted personality that you find in a Bioshock, Silent Hill or Half-Life 2.  Batman: Arkham Asylum was unquestionably great. 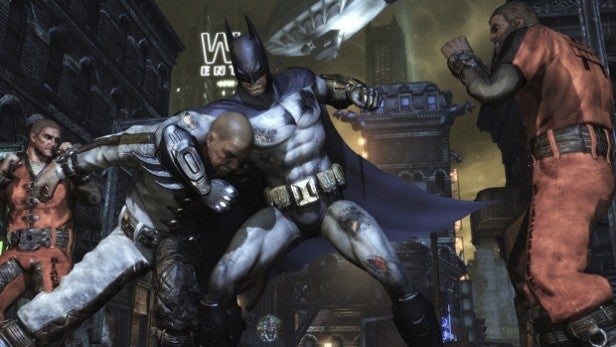 The challenge for this sequel has been to expand on it; not just in terms of moving the action out from the original’s claustrophobic island setting to a larger, urban world, but in terms of building on the style and game mechanics of the original game. Arkham City is a bigger game, with more to see, more to do and more to explore. It’s a game where traversing the rooftops via grappling hook and gliding cape plays a much larger part.

Where Arkham Asylum had a much more linear, story-led approach, Arkham City takes a semi-open world approach, with the core storyline surrounded by sub-quests,challenge missions and wandering groups of criminals in need of taking down. And there are points at which the game looks like it’s lost control, as the plot jumps from one villain to the next with the most sketchy causality, or you lose track of where you’re going and what you’re doing next. Yet for the most part, it works quite brilliantly. While we might have reservations over whether Arkham City is better than Arkham Asylum, it’s still an exceptional game. 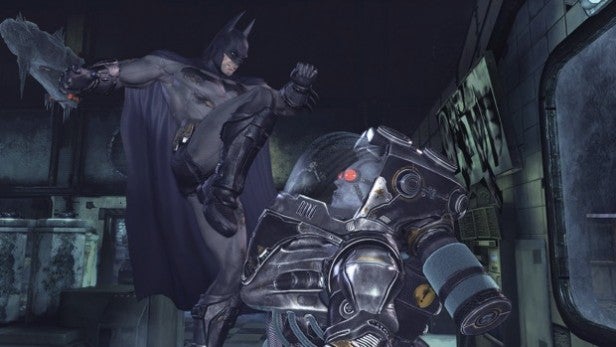 This time events kick off some months after the events of the previous game, with Gotham’s lunatics and criminals moved from Arkham Island to a sectioned off area of the city. Within the prison walls, Batman’s greatest villains wage gang warfare on each other, watched over by a security force controlled by the mysterious Hugo Strange. Concerned by Strange’s talk of a sinister project, Batman’s investigations lead him to Two Face, Catwoman, Penguin, the Joker and a parade of classic villains, each ensconced in some facility or civic building reworked to form a perfect lair. In between, the Dark Knight can take on ad-hoc objectives and side missions, rescuing vulnerable prisoners from brutal gangs, collecting all those ticky Riddler clues, tracking down tanks of the TITAN agent with Bane or stopping a serial murderer before he can strike again. As we said, there’s a lot to see and do. 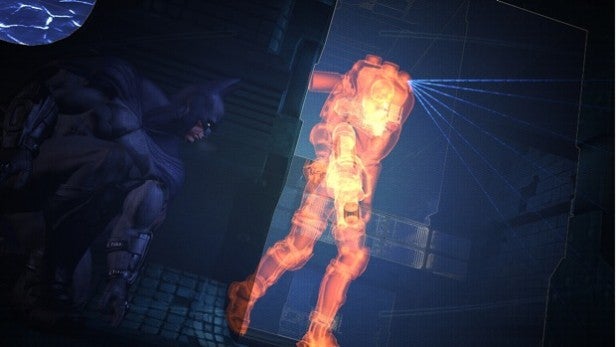 The city itself is superb: a stunning combination of the futuristic, industrial and gothic which is a pleasure to zip through with a grappling hook or glide over with your cape unfurled. It’s not huge, but it is detailed, and the interiors, whether The Joker’s clown-coloured steel mill or The Penguin’s creepy natural history museum, are rich with texture and ghoulish decor. As with Arkham Asylum, the villain design is extraordinarily smart with the re-imagined Penguin – a brutal Brit mobster with a broken-bottle monocle – such a brilliant concept that you wish Christopher Nolan would pick it up for another Batman movie.

And beneath all this, the gameplay is as good as ever. Where Batman faces unarmed thugs, it’s possible to battery your way through with a dizzying flurry of punches, kicks and combos, all quite simple to pull off but hugely satisfying to look at – particularly when you see that last, slowmo crunch on your final foe. Where you face multiple armed opponents, you need to think fast and move faster, jumping and grappling from vantage point to vantage point, taking down each enemy in turn with fast stealth takedowns from above, behind or even below. In the meantime there are puzzles to solve, most reliant on some item in Batman’s growing armoury. As well as the Baterang, explosive gel and grappling gun from the first game, there’s a new weapon that fires electric charges into motors and panels plus a very nifty hacking device. At its best, Arkham City feels like an ingenious blend of Metal Gear Solid, Prince of Persia, Assassin’s Creed and Zelda, with the most fluid close-combat in town. 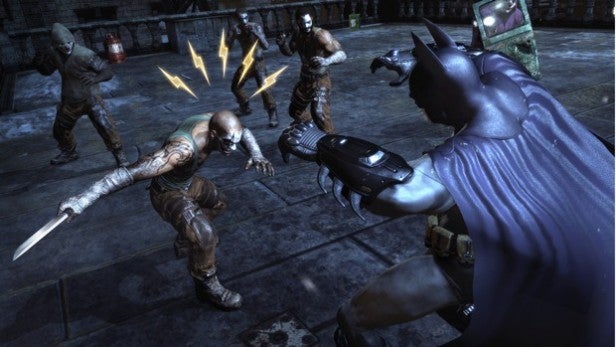 There are some refinements from the original game, and they’re generally improvements. The Detective Mode, the view that highlighted enemies, exits and interactive objects, was a vital part of Arkham Asylum, but there was a temptation to play practically the whole game inside it, missing out on much of Arkham’s visual splendour. With Arkham City, there are ways in which Detective Mode restricts your vision, making it much, much easier to kick the habit and play in normal view. More thought has also gone into giving you multiple ways to take down groups of villains: perch on the gargoyles and attack from above, use vents and attack from below or find weak walls and grab your enemies through them – it’s all your choice. 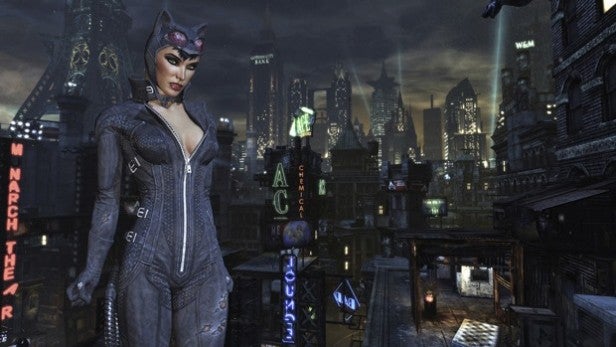 There are some minor disappointments. The optional Catwoman chapters, originally unlocked through the game once you use your free DLC code, and now integrated into the Wii U’s single player campaign, are fairly short. At the end of the day she’s a faster variation on Batman with a ceiling-crawling skill and some different attacks. Most of all, the game misses the steady build-up of tension and atmosphere that made Arkham Asylum so great, not to mention those creepy Scarecrow episodes and the tapes and journal entries that looked into the inmate’s cracked psyches and the disintegrating state of the asylum. Arkham City is a stronger and more fully realised game than the original, but it’s lost a little of Arkham Asylum’s creepy vibe.

This is still true one year on, now that Arkham City: Armored Edition hits the Wii U. Nintendo liked this enhanced port enough to showcase it during this year’s E3 conference, and it’s not hard to see why. It finds all sorts of ingenious uses for the Wii U Pad, ranging from a motion-controlled scanner when you’re doing some detective work, to a motion controller for the Batarang, Remote Electric Charge gun and Explosive Gel. Sadly, none of these really enhance the game. We’re in gimmick territory here, and the old controls are arguably faster to use and more intuitive. 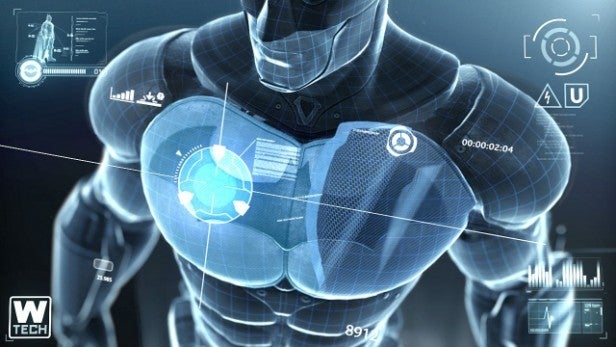 Meanwhile, the addition of new ‘armour’ costumes for Batman and Catwoman do nothing to enhance the game’s visual appeal – Batman’s armour is clumsy, though some will be happier to see Catwoman’s extravagant cleavage covered up. There is a new combat mechanic where incoming hits dished out to the suit can be harnessed and expended to increase your own damage, but the effects are fairly minor.

The biggest improvements are the movement of interface elements to the pad and the fact that you can now check the map without pausing the action – it’s all there on the pad’s built-in screen. We also get some bundled DLC, and the option to play the game on the Pad instead of the TV; one of our favourite features of Wii U. 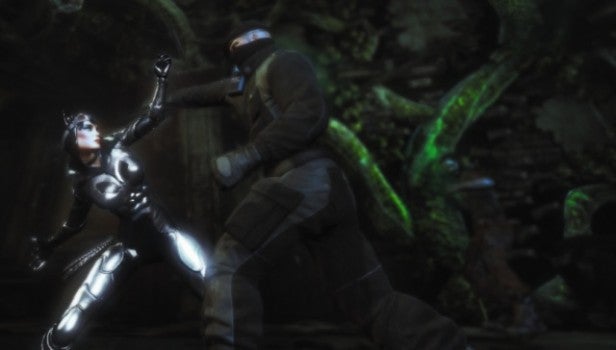 However, all this comes at a cost. Frame rates are woefully inconsistent, fine one minute, stuttering all over the place the next. The problem is particularly apparent when you’re gliding over the city and there’s a bit of activity on the streets or rooftops, or when you’re in combat with a large number of goons. It’s not bad enough to wreck the game – we still played happily for several hours and would have carried on – but it means that, for all the enhancements, the Wii U version isn’t quite as playable as the Xbox 360 and PS3 versions. Arkham City is a game you need to play, but if you have a choice of platforms, the Wii U version isn’t necessarily the one to buy.

Whether it improves or not on its illustrious predecessor, there’s no questioning the quality of Arkham City. It’s intelligent, gritty and beautifully designed, and it gets who the Batman is and what makes him work. Whether you’re a fan of the comic books, the movies or just good video games, this is one of the Dark Knight’s most welcome returns.