Had you asked me a decade ago who waits more than a few years on a video game sequel, I might have shrugged. Now, older and wiser, and hardened by my own experiences, I know that a decade is nothing.

Fans of The Bard’s Tale have waited a whopping 30 years for a sequel to the last instalment in the franchise, The Bard’s Tale III: Thief of Fate, and now InXile Entertainment has answered their prayers.

InXile has become a bit of a specialist in resurrecting old CRPG favourites. Whether it’s direct sequels to a gaming franchise such as Wastelands II or spiritual successors such as Torment: Tides of Numenera, the studio creates modern versions of classic RPGs, trying to preserve what made them so enjoyable in the first place.

The Bard’s Tale IV is a first-person dungeon crawler. Every place you enter is laid out on an intricate map that’s revealed while you walk. It’s likely you’ll get lost, but you almost always find something when that happens, such as treasure or new pathways and quests to discover later.

The game’s main setting is the town of Skara Brae, which is designed almost like a hub world; it provides access to several different parts of the main dungeon from several points in the city.

In addition to these access points, various items – magic or just good old keys – can also open new paths. You unlock new environments in a very organic manner, so once you’ve found a key or learnt a spell to rid yourself of an obstacle, you likely already know where to use it. If not, short and unobtrusive tutorials show you how to use any skill you need to advance. 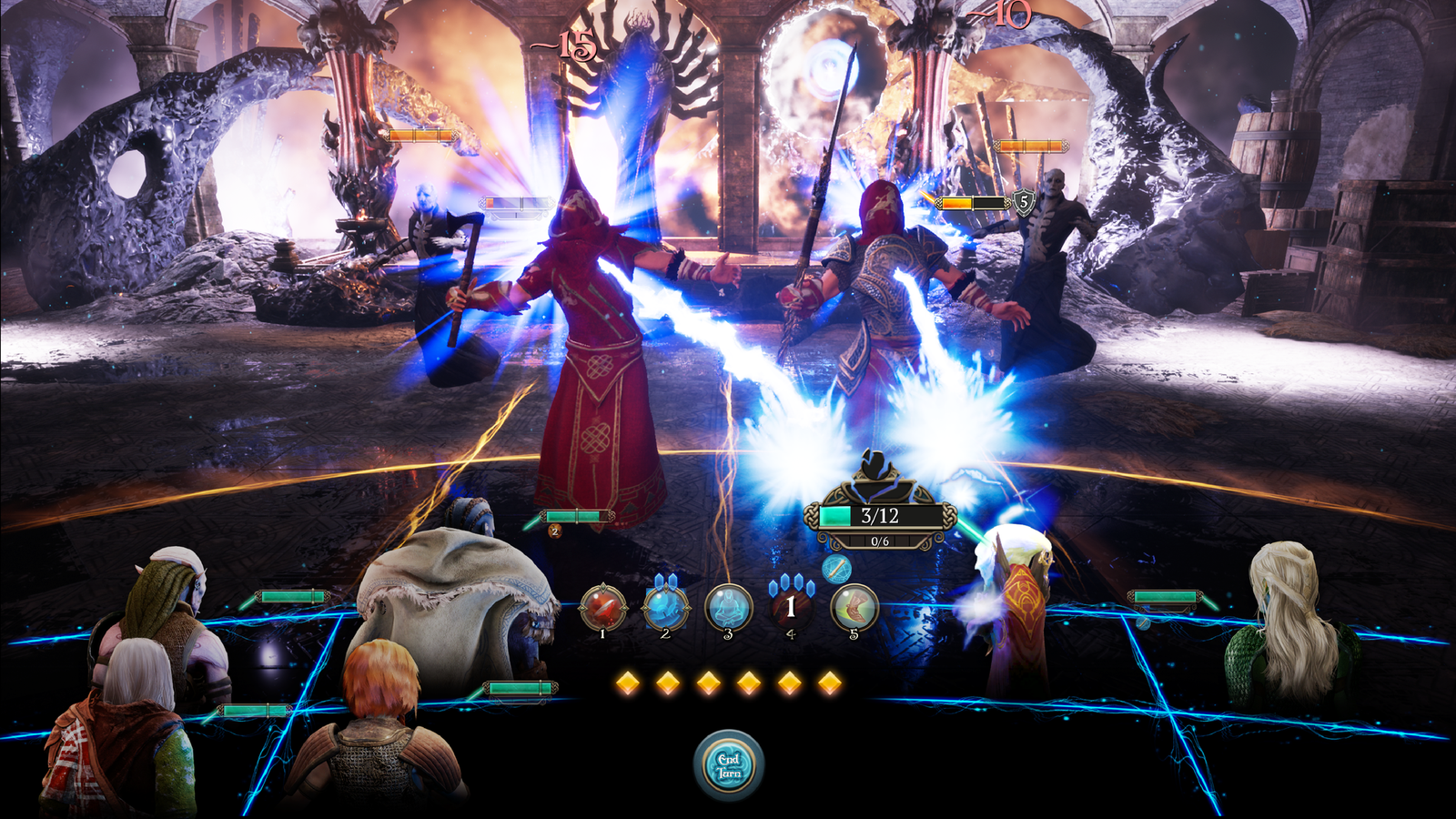 As the name suggests, The Bard’s Tale IV is all about bards – the most-beloved or hated character class in pen and paper RPGs, depending on who you ask. In practice, this means that – unexpectedly – you have a very musical game on your hands.

Not only does The Bard’s Tale IV have a beautiful Gaelic folk soundtrack accompany it, many NPCs sing, too. Using songs is also a viable game mechanic. Over the course of the game you’ll learn different songs that help you solve puzzles by moving objects, restoring or destroying them, and even making the hidden visible.

Unfortunately, there’s hardly any trial and error involved in using a song. If you’ve just learnt a new song, the part of the dungeon you’re in is going to be all about you using it, giving you colourful runes to sing at in order to activate something.

Of course, you also run into enemies on your travels. Once they spot you, they’ll attack immediately. So, depending on the strength of your opponent – visible by a coloured icon above their head – it’s important you get the drop on them first to avoid immediately being wiped out.

The round-based combat takes place on a grid layout. Characters can stand in the front or in the back, and each grid has several columns you can move to. In each round you have fixed number of opportunity points to spend between all characters. Every action has a cool-down period; some attacks and buffs require a charging period first.

At first, it’s a nice tactical challenge to decide on your actions for each turn. You often need to think ahead and make the choice between attack and defence, cleverly managing your cooldown periods between the members of your party, too. Unfortunately, that tactical element completely wears off once you realise enemies always make the same choices. You can meet the same type of enemy twice in a row and never need to adjust your strategy at all.

In addition, The Bard’s Tale IV limits the number of actions you can equip at a time to four, plus movement and an item. Instead of  being a tactical challenge, it simply leads to a hunt for a good skill combination, which you then won’t have to change for hours, if ever.

It’s a shame because the grid-based combat system and this core loop of gathering gear – you know, crawling dungeons, is satisfying and it’s a niche that isn’t being filled by other games right now. It’s just a shame that the core experience of actually playing the game doesn’t work. It’s oft-frustrating and feels shallow.

The Bard’s Tale isn’t a good-looking game by any stretch of the imagination. While talking, characters open and close their mouths vaguely – if they remember to, and any dungeon that isn’t made out of grey stone from the get-go will turn into grey stone the further you move down the various corridors. This could be a conscious throwback to the hallways of old dungeon crawlers, but in a modern game a bit of variation wouldn’t go amiss. There are several invisible walls in the game, and some of these will flicker as you look over them.

Apart from the hallways, there are several design decisions that made sense in the 1980, but that only serve to frustrate now.

Dungeons are designed so you can either navigate them freely or activate the old style of movement that had you turn your character in any given direction by 90 degrees. This is a fun idea, but The Bard’s Tale IV is a clipping nightmare. Wherever you turn, you’re bound to get stuck on the smallest things – like the edge of a wall just out of your vision.

You also either have to stand right in front of items at exactly the right angle so the prompt for an action appears, or fiddle with the elusive ratio of close, but not too close until the prompt stops flickering. 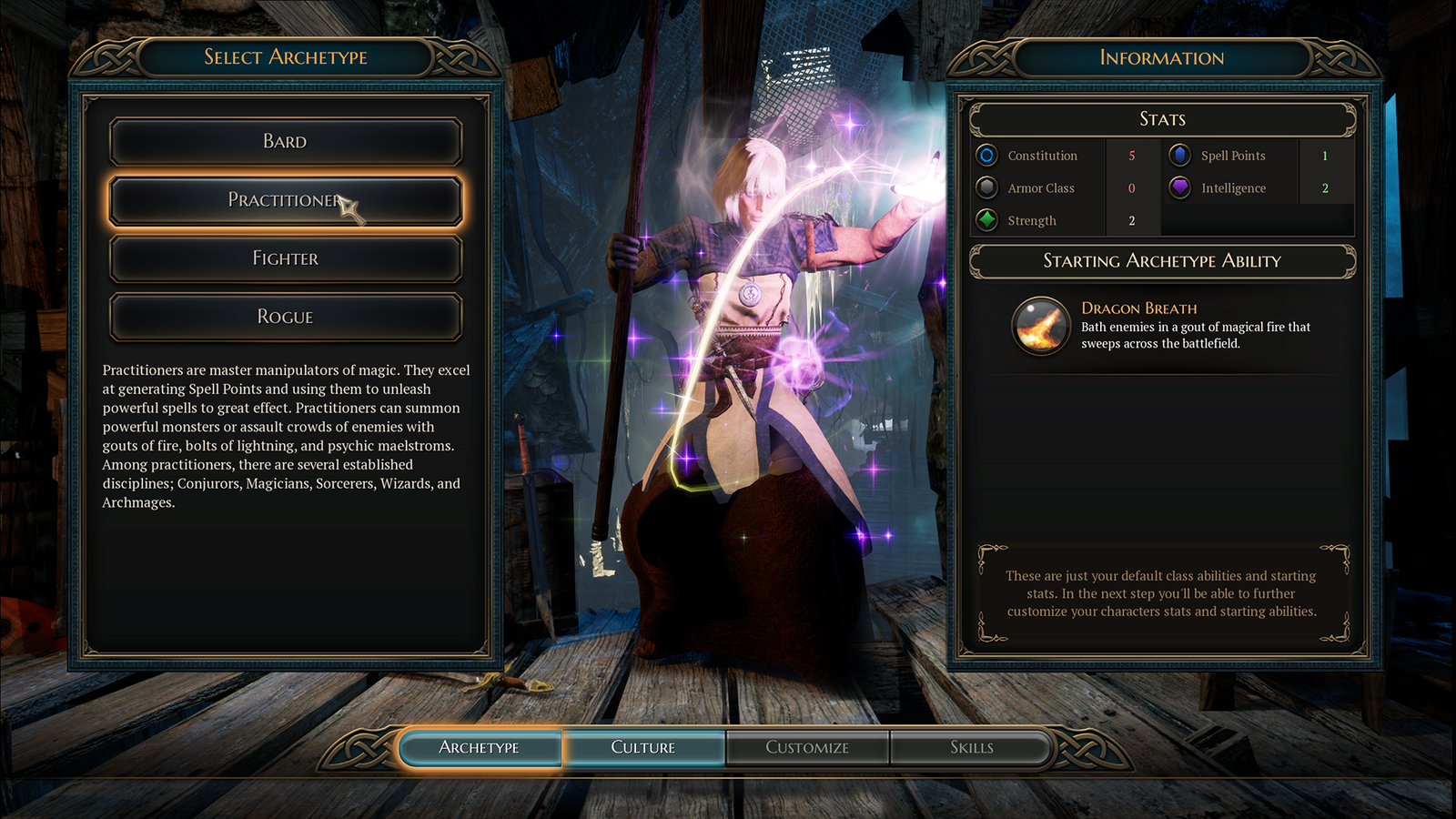 The Bard’s Tale IV also uses save points instead of an autosave feature. At most save points you can decide whether to save or destroy the save point permanently for an XP boost. Like limiting your skill slots, this is meant as a challenge. However, if you implement such a feature in 2018, you better make damn sure your game doesn’t randomly crash, a problem encountered during testing.

Lastly, the story in The Bard’s Tale IV is largely negligible. You find out everything you need to know right in the pre-game intro sequence: evil gods have been imprisoned in a realm from which all they can do is charm susceptible people to try to free them. You’ve stopped such people three times before, now do it again. This is literally what the game says.

From then on out, every plot point is completely transparent thanks to The Bard’s Tale IV’s habit of unintentional spoilers – if someone in your party says, “I hope we won’t be too late”, then expect them to be late.

Characters are completely devoid of personality, and while there’s clearly a lot of effort in the voice acting, including the use of actual Scottish people for characters with Scottish accents (which in this world is almost everyone), the quality of it varies so wildly that even the most heartfelt scene becomes comical.

Without the bugs, The Bard’s Tale IV is okay at best. With them, it’s perhaps best to preserve your nostalgia and play the HD remaster of The Bard’s Tale I to III instead. Several bugs were cleared up between us getting code for the game and the review version, however as it stands the version we’re currently playing still has several technical hitches and is a mediocre experience even when it runs smoothly. It could be better, but it’s hard to recommend in its current state, even to die-hard fans.