You can always rely on Bang & Olufsen for unique design. The BeoSound Shape is the latest addition to its range of products, and it’s a modular speaker system designed to live on your wall.

B&O wants to challenge the notion that one size fits all, and so this system is scalable to fit rooms both large and small. The idea is also to move music away from the traditional hi-fi setup – with its stereo sweet spots – to something a bit more inclusive.

As is the case with pretty much everything I’ve seen from Bang & Olufsen, the B&O BeoSound Shape takes aim at audiophiles and design aficionados alike – and packs a whopping price tag. Prices start at £3400.

Is it worth it? I had the opportunity to play with the BeoSound Shape at its UK launch in Fabric nightclub, London – a fitting venue to turn it up. Here are my first impressions.

How do you feel about a bunch of cloth-covered honeycombs sitting on your wall? Well, I say honeycomb; B&O says the design was inspired by mountains, specifically the way mountains break up light.

Either way, I suspect the design will divide opinion – which seems to be the point. B&O hopes this ‘sound as tapestry’ concept will be a conversation starter. I’m sure that won’t be a problem.

For what it’s worth, I think it looks quite cool. You can arrange the panels in any shape you like, and you get to choose the types of cloth and their colours too: regular speaker grille cloth or fancy wool from Danish textile house Kvadrat. I was hoping for B&O’s signature aluminium overload – but, understandably, it’s been omitted; aluminium would make it heavier and more expensive. 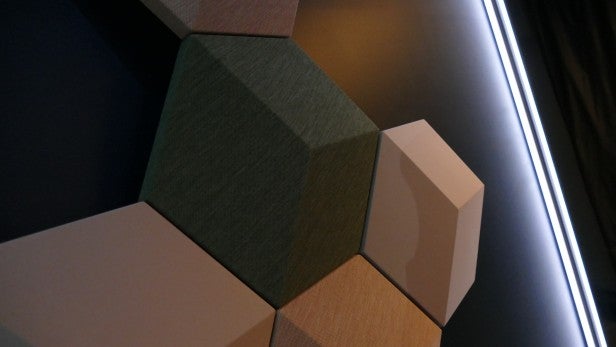 Contrary to what it looks like, not all of those panels are created equal. There are three types: amplifier, speaker and acoustic damper.

As for the acoustic damper panels, they exist because B&O wants this set up to play nicely with your room. The idea is to let you change the room’s sonic characteristics: add fewer panels for a more active sound or more panels if your room is particularly reverberant. 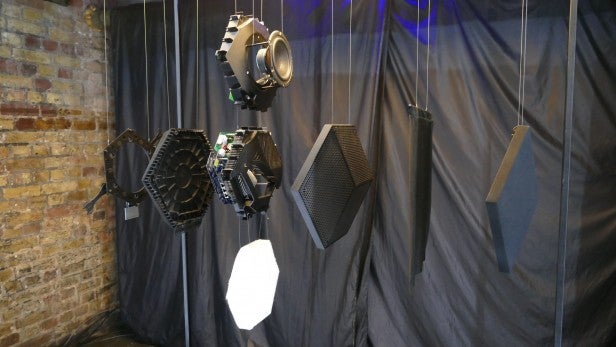 You can also remove the damping material and use the hollow panels to hide unsightly cables, for example. You’ll need to do this at least once to hide the BeoSound Core, which is essentially the brains of the whole system. It’s where all the connections go.

The BeoSound Shape offers dual-band Wi-Fi and its streaming skills include Google Chromecast, Apple AirPlay, Spotify Connect, plus QPlay for the Chinese market. It also has DLNA for streaming music from a NAS drive, and Bluetooth for playing tracks off your phone – plus BeoLink for use with other B&O products in a multiroom setup.

The standard set up gives you six tiles: two speakers, two acoustic dampers, one amplifier and one core, and after that you can buy individual components to suit your design. So you’ve decided on a layout for your honeycomb/mountain range – but how do you know where to put a speaker or amplifier? Thankfully, B&O has an online configuration guide that shows you the ideal placement for any setup. 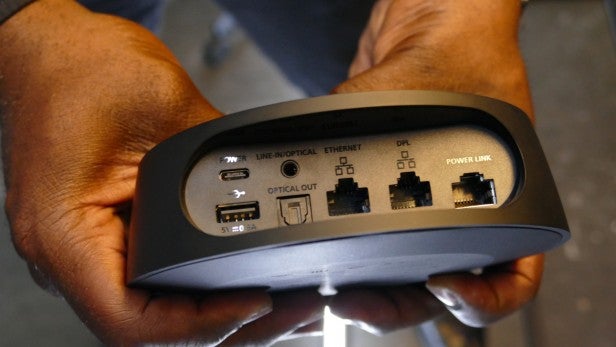 How the BeoSound Shape sounds will depend entirely on your setup. The one I got to play with was nailed to the wall of a nightclub basement, and it was huge. What I experienced was an inescapable wall of sound, which was capable of getting quite loud.

The sound was articulate – I had concerns that having so many individual speakers might result in something that sounded a bit chaotic, but they were all nicely integrated. It wasn’t the most subtle performance I’ve heard, but there was plenty of crisp detail, and I was impressed by the bass extension.

The mid-range takes centre stage, literally, as B&O’s digital processing intentionally pushes voices towards the centre of any BeoSound Shape setup. It’s called the ‘band on wall’ concept and it feels a little odd at first, but it does work.

I did find the top end to be a little overactive, but that might be more to do with playing a massive sound system in a maze of brick arches. Personally, I’d have added a few more of the damper panels – that freedom to customise is entirely the point of such a system. 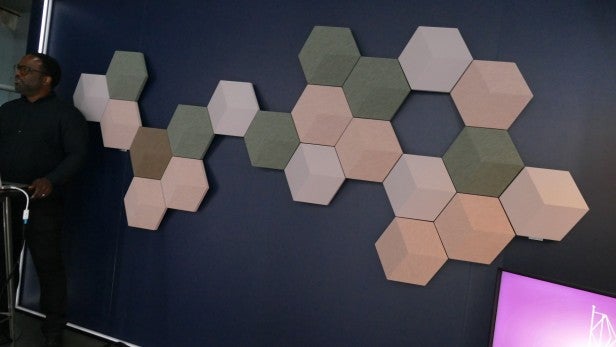 I’ve come away from the BeoSound Shape with the same initial thought I get every time I see a B&O product: it’s lovely, but that price tag…

This system isn’t for the majority. This isn’t for hardcore hi-fi enthusiasts, who – for the same money – could build a more impressive-sounding traditional system, albeit a less stylish one.

This is a statement, for those who can afford to make a statement – in the same way that one might buy a yacht or a marble statue for their gazebo. I don’t see the BeoSound Shape making its way into many people’s homes; I see it in Michelin-starred restaurants and luxury hotels.

For those customers, I have no doubt they’d find the BeoSound Shape baffling and engaging in equal measure.