What is the Bang & Olufsen BeoSound 1?

There have been small lifestyle speakers under the B&O Play label (a mainstream offshoot of the company) but today we’re dealing with B&O proper. That means you can expect even-higher-end Danish design and craftsmanship – and an appropriately large price tag.

It’s an insane £1085 for a portable speaker. Is it worth it? Judged on looks and build alone, perhaps. But factor in user-friendliness and sound quality, and it starts to look a bit pricey.

New for 2018 is a limited-edition Piano Black version (below), which looks absolutely lovely and costs the same as the standard Aluminium and Brass finishes. 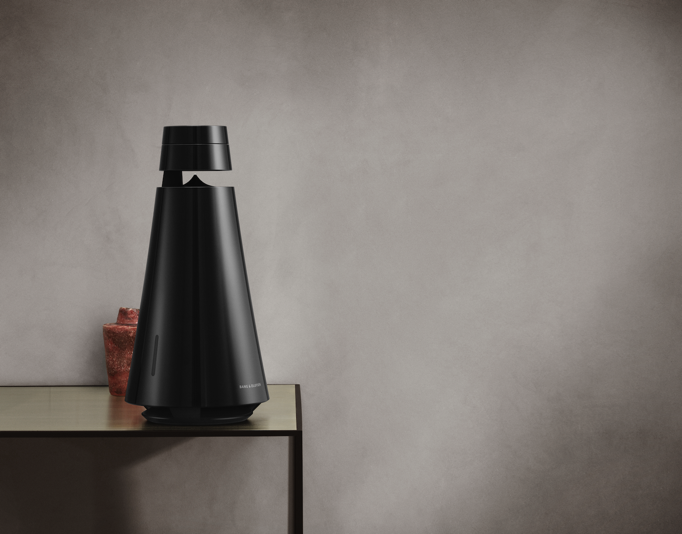 You can always count on B&O to make something stunning.

The BeoSound 1 is a striking design that is more futuristic sculpture than audio equipment, with a top section that seems to hover above the rest, and a body extruded from a single sheet of aluminium.

It’s lovely, and not far off what I’d imagine Darth Vader’s kettle would look like. The portable speakers market is very crowded, but this B&O manages to stand out. 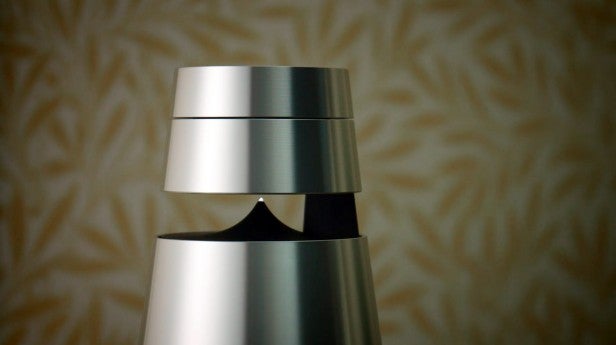 The build quality is nothing short of lush, and it certainly feels like a £1,000 product. This is the most expensive portable speaker I’ve tested, but it’s also undoubtedly the most luxurious. A comparison with fancy hi-fi kit wouldn’t be inappropriate.

The very top part of the BeoSound 1 serves as a volume knob. They’re a rarity in the world of portable speakers, especially one that feels as lush as this one. It’s weighty, smooth to turn but with just the right amount of resistance – that’s something I’d expect to find on a high-end AV amp. 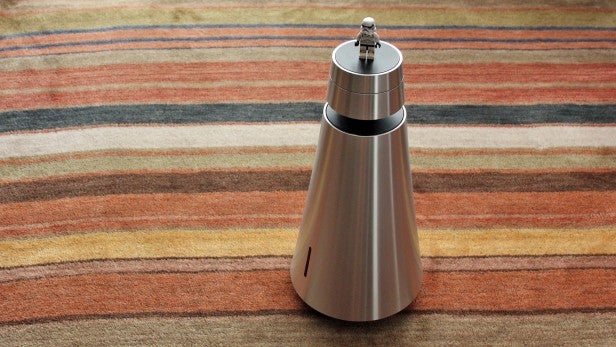 It’s no ordinary volume knob, either. The top surface is actually a touch pad: tap to play, double-tap to change inputs, swipe left or right to change tracks. A proximity sensor promises to make this a 360-degree offering: no matter where you stand, you’ll always be swiping right to skip forwards.

It’s not just the design that’s 360 degrees, it’s the sound too. The top section houses a 1.5-inch full range driver, which fires downwards into a reflector designed for a uniform sound in all directions. There’s 4-inch woofer, also down-firing, at the bottom too.

The one flaw in the design is how you’re supposed to handle it. There are no visible handles, because the BeoSound 1 is too beautiful for something so crass. Instead, you’re supposed to lift the speaker by putting your fingers into the gap between the main body and the ‘floating’ top section.

This sounds clever until you realise there’s is a driver at the bottom of that top section. Your fingers are supposed to rest on the small ridge surrounding the driver, but it would be all too easy to slip – and then it’s over £1000 down the drain. It would be fine if the speaker wasn’t designed to be portable – but it is, so this is a concern. 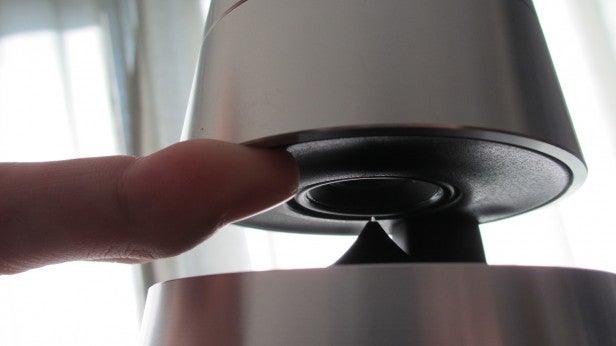 The most important feature of any portable speaker is its battery life, and the BeoSound 1 boasts up to 16 hours on moderate volume and four hours on loud.

That’s plenty for the household use the BeoSound 1 is designed for. It’s not waterproof, and at 3.5kg it’s not something you’ll want to carry for long – no festivals for the BeoSound 1.

You’d expect any fancy wireless speaker to be well connected, and the BeoSound 1 doesn’t disappoint. It has dual-band Wi-Fi, and its BeoLink multi-room tech means it will play nicely with other networked B&O (and B&O Play) products you might own.

It also offers Apple AirPlay, Bluetooth, Google Cast, and DLNA for accessing music you have stored on a NAS drive. The BeoSound 1 can handle hi-res tracks up to 24bit/192kHz. For streaming services, you have Spotify, Deezer and TuneIn Radio. Basically, you’ll struggle to run out of music.

Set up is a bit fiddly. There are no instruction manuals – just a pointer to the B&O website, which has you download two apps. You need the BeoSetup app to get things running, and then the BeoMusic app to access your music and control playback. It might take a few goes – the apps are more temperamental on Android than on iOS – but soon the LED goes white and you’re off. 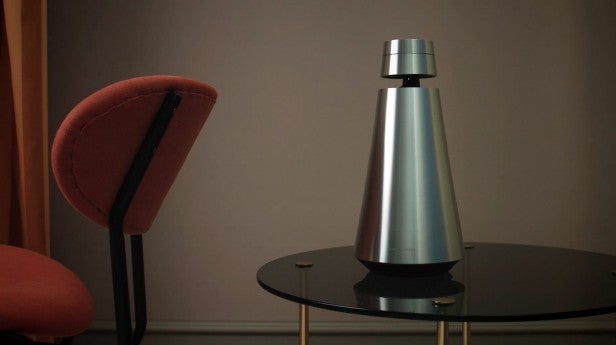 Despite the BeoSound’s gorgeous design and impressive specs sheet, the performance is a mixed bag.

For starters, the software is a bit buggy. It’s not the first time I’ve said this, but the BeoSetup app is terrible. It’s not always responsive and when it does respond it can take its sweet time.

It also occasionally has issues reading your device on your network – not great when the device is so minimalist you’re forced to contend with the app for the most basic of settings. Wireless speakers with limited controls live and die by their app support, and I always go into the BeoSetup or BeoMusic apps with a slight reluctance.

Thankfully, the music is a lot more enjoyable. The first thing I noticed was how large the sound was. The BeoSound 1 puts out a massive sound, so the dispersion techniques definitely worked. It also keeps its promise of 360-degree uniformity. There’s no traditional ‘sweet spot’, but the sound is even in balance and timbre no matter where you stand. Many 360-degree speaker manufacturers make the same claim, but here it’s actually true.

It’s a pleasant sound, too, staying smooth even as you crank the volume. And you can do that – the BeoSound 1 can get neighbour-botheringly loud without distorting.

Tonal balance is good, with a crisp treble and a deep, thunderous bass. The midrange is direct and strong, which surprised me considering the size of the driver.

The trouble is the competition. At £1,000, the BeoSound 1 must perform better than its more affordable piers, and sadly it struggles. Take the Naim Mu-so (£895) as an example: it does nearly everything the BeoSound 1 offers, bar the 360-degree thing.

Crucially, the Naim Mu-so makes it apparent that the BeoSound 1 could do with more detail. Textures could be clearer, leading edges could be firmer. The bass could also be tighter – there’s plenty of it, but the Naim digs deeper and is more articulate. 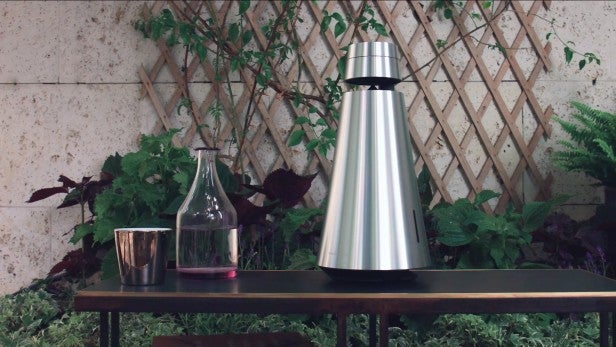 Should I buy the Bang & Olufsen BeoSound 1?

I said at the beginning of this review that this is no ordinary portable wireless speaker, and I stand by that. The BeoSound 1 is a thing of beauty, and I wish everyone would aspire to such heights of design and tactile perfection.

But I’m also aware that people buy these things to listen to and use, and on that front the BeoSound 1 does not justify its price tag. Its software is temperamental, and its performance could be better. If it wasn’t so expensive, I would be a lot more enthusiastic.

This wireless speaker is drop-dead gorgeous, but it’s too expensive.