This is not to say, though, that the V1 is devoid of interesting
features. Particularly nifty for all those Apple devotees out there is
the hole and strapping tucked away on the TV’s rear expressly designed
to hold an Apple TV box. This box doesn’t get any further ‘special
treatment’; you still have to jack it into one of the five HDMIs and
feed it its own power. But anything that makes it easy to accommodate
Apple’s tiny gizmo is a bonus so far as we’re concerned.

Another feature is B&O’s Beo4 remote control. It’s not often we feel compelled to bring forward a remote as a feature, but the Beo4 is no ordinary remote. For starters its cast zinc bodywork feels sensationally plush in your hand, as well as making the Beo4 the heaviest handset most people will ever wield.

Its gorgeous elongated design (by B&O favourite David Lewis) feels beautifully balanced too, and the inclusion of a large LCD display at one end is the icing on the cake. This remote can be set by your B&O installer to handle just about any secondary kit you might own too.

There are a couple of problems with the remote as well, though. First, the little nub in the remote’s centre you have to use for moving around the TV’s menus feels rather sharp on your thumb.

Second, the remote is badly in need of a refresh so far as its button labelling is concerned. There’s a key saying CD on there, and the ‘DTV’ and ‘DVD’ buttons actually represented our Sky box and Panasonic Blu-ray player HDMI inputs.

The buttons are configurable to some extent, but this doesn’t really alter the outdated impression.

A unique part of the BeoPlay V1’s make up as a vaguely affordable TV is its support for external audio systems. The set sports a built-in 5.1 surround sound decoder and jacks for hooking up B&O’s BeoLab active (powered) speakers. Or other active speakers should you not feel compelled to stick with the B&O name.

If you add external speakers, you can choose to use the TV’s own speakers – which themselves offer 3 x 32W of closed-box power – as a centre speaker.

A further high-end connectivity trick is the V1 40’s support for B&O’s Network Link functionality, enabling the set to be integrated to other B&O gear around your home. This feature was only added to the V1 in February, mind you, so if you’re reading this article as an existing V1 owner, you may need to download the firmware update for its from the Internet.

One final premium feature of the BeoPlay V1 is the way its picture  closes like a pair of curtains in classic B&O style when you turn the TV off. And there really is nothing not to like about that. 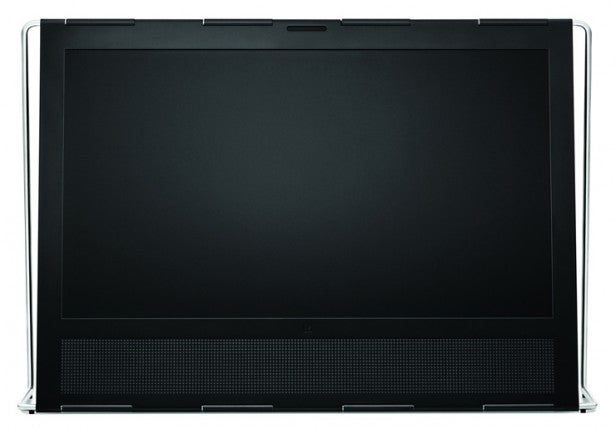 In action, the BeoPlay V1 impresses without hitting the same heights as the BeoVision 11-40.

Right away you’re struck by just how natural, unfussy and clean its pictures look. Colours are bold and radiant but also natural and noiseless. Detail levels with HD material are high but never feel forced to the point where things look gritty or stressed. Standard definition pictures also look quite crisp, and the upscaling processing that makes this possible is pretty canny at adding sharpness without exaggerating source noise.

The set’s contrast range hits the right notes during our early tests, too. Whites look crisp and pure, bright colours look punchy but natural, and dark parts of the picture are able to look pretty black and deep without requiring overly heavy sacrifices to the picture’s overall brightness.

B&O makes much of the fact that it derives its picture quality using panels of actual human beings rather than just calibrating them to hit numeric targets or industry standards. And while this approach won’t tick everyone’s boxes, it’s undeniable that it mostly leads to very engaging images with a wide range of content and a minimal amount of effort from you.