Playing a part in the consistently engaging nature of the BeoPlay V1’s
picture quality is an unusually clever sensor system that assesses the
parameters of your living room and adjusts the picture accordingly.
Generally these systems are best avoided, but the V1’s automated results
really aren’t bad at all, and could be genuinely helpful for people
using the TV in a room with a very variable light level.

It’s worth adding, too, that the BeoPlay V1’s Movie preset does give a pretty ‘accurate’ – according to the REC709 standard – image. Though it’s a pity for serious movie buffs that B&O continues not to provide serious colour management tweaks that might take the TV to the next level where AV enthusiasts are concerned. The only way to access such controls is via an engineer who’s opened up B&O’s service menus.

Even during the relatively unchallenging content that made up the early stages of our tests, though, we spotted a couple of niggles. First, the set delivers a slightly basic approach to colour blends compared with the best of 2013’s TVs. This can leave some areas of colour – most notably skin tones – looking a touch plasticky and ‘basic’.

Second, motion isn’t particularly well handled. There’s clear evidence of both resolution loss and judder over motion, and calling in the provided motion processing circuitry on either its adaptive or full settings doesn’t help much as it causes some very noticeable unwanted processing artefacts. 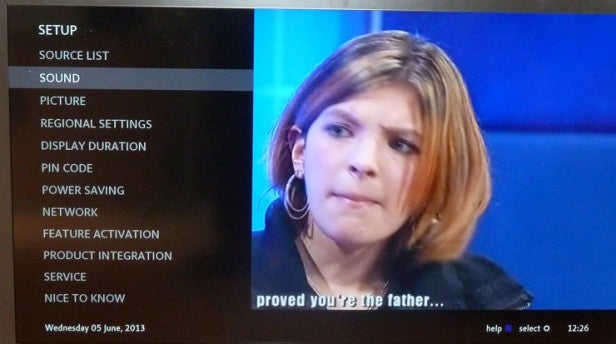 The stiffest test of any TV’s resolve always comes when you ask it to deliver really dark movie scenes. And the BeoPlay V1 doesn’t survive our favourite dark content totally unscathed, either.

The problem is not, though, that the set doesn’t know how to deliver a pretty convincing black colour. In fact, while there’s a touch more greyness over some dark scenes then we witnessed on the excellent BeoVision 11-40, by the standards of the LCD world at large the V1’s black level response is very good. It’s great to see, too, that the set is almost completely free of the ‘grey cloud’ backlight inconsistency problem found with many edge LED TVs.

The chief dark scene issue is that the TV has to work too hard to deliver its black levels, crushing out more subtle detailing in the darkest areas than we were comfortable with. Dark colours also seem to slightly emphasise the lack of colour subtlety noted earlier.

As we’ve become accustomed to finding with B&O TVs, the BeoPlay V1’s audio makes most rival sets sound positively puny. Its ability to produce large amounts of power across a wide dynamic range at movie-loving volume levels without distortion, harshness or compression is a joy to behold.

So talented is the V1‘s audio, in fact, that you can frequently pick out subtle soundtrack details you just don’t get with pretty much any other TV speaker system, such as the sound of wind blowing around outside Aberforth Dumbledore’s house when he rescues Harry from the streets of Hogmeade.

You can if you push volume levels really high cause male voices to start sounding slightly thick and bass to become so dominant the cabinet can eventually start to ‘fizz’ a bit. But this only happens at volume levels way beyond anything most normal households will want to employ.

Given the BeoPlay V1’s relatively ‘youthful’ appearance, its gaming performance is potentially of more interest than it might normally be with a B&O TV. But if you do happen to be a fairly flush serious gamer, we’ve got bad news for you. Namely that we measured the V1 40’s input lag at a frighteningly high 160ms, even using the provided Game preset. This is one of the highest such figures we’ve recorded, and not surprisingly it wreaks havoc on your twitch gaming skills. 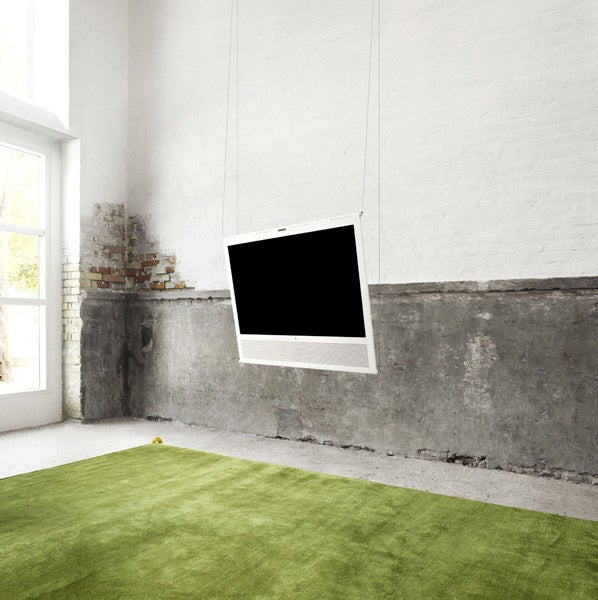 The BeoPlay V1 has its moments. Its audio system is outstanding, and its pictures with bright, colourful content are extremely easy on the eye. Its build quality is excellent too, and its design is eye-catchingly industrial.

For all this, the TV isn’t quite as ‘B&O’ as we’d like it to be. There are flaws with its picture performance we didn’t see on the (admittedly much more expensive) BeoVision 11-40, and these are severe enough at times to leave the V1’s pictures looking less engaging than those of a few vastly cheaper 40-inch TVs, such as the Samsung UE40F8000.

The set’s design isn’t quite as extreme as we would usually expect from the brand either, and there’s no hiding from the fact that decent 40-inch TVs costing far, far less offer 3D while the V1 does not.

The B&O BeoPlay V1 is a good all-round performer that excels in some areas – especially its audio. Ultimately, though, it doesn’t deliver enough in feature, design or performance terms to justify its premium price or, perhaps, its wearing of the B&O badge.