The Beolit 20 is typically Bang & Olufsen. Stylish looks, energetic sound and a premium price. The addition of Qi wireless charging brings some added convenience, but the sound quality isn’t the most balanced and it’s on the big side for those after a portable speaker.

The Bang & Olufsen Beolit 20 is the latest iteration of the Danish brand’s portable speaker series, replacing the outgoing Beolit 17.

It continues the story B&O has etched for itself in crafting – and ‘crafting’ does feel like the right word here – wireless speakers from premium materials with a focus on high-quality sound.

It’s big for a portable speaker and pricey, too – but if it’s anything like the Beolit 17, then B&O could be on to another winner.

The word ‘affordable’ doesn’t appear often in the Bang & Olufsen dictionary – at least it didn’t until the Explore appeared. The look and build quality of the Beolit 20 reflects the RRP, so while it isn’t what you’d call affordable, few wrap their speakers in as much style as B&O.

B&O has said it’s made several subtle adjustments over the Beolit 17, but unless you have a very keen eye, you’ll only be able to spot a few clear differences. The result is pretty much the same, though – a wireless speaker crossed with a picnic hamper.

The sieve pattern that occupies much of the Beolit 20’s form has been optimised to aid the speaker’s acoustic delivery. The corners and angled lines have been tweaked, while the height and curvature of the speaker’s top shelf has been adjusted for placement of a smartphone as the Beolit 20 top surface also functions as a Qi charging platform.

On that top shelf is an array of buttons: power, Bluetooth, play/pause and volume (there’s no means of skipping tracks, at least not on the speaker itself). While button presses are responsive, pressing the playback button causes brief moments of stutter. In fact, it’s an issue that persists on this review sample, whether you’re using the onboard controls or controlling music via a mobile device.

Given the Beolit 20 has been conceived as a portable speaker, the aim is to carry it around. For that purpose, there’s the vegetable tanned leather strap, which will likely please those with an eye on products that have a more ethical stance and use sustainable materials.

You’ll certainly need that strap – at 2.7kg, the Beolit 20 is pushing the limits of portability; picking up the speaker feels like picking up a dumbbell. Nevertheless, its aluminium body is pretty sturdy so unless it’s dropped from height it should be able to survive a few knocks.

There’s a choice of two finishes: Black Anthracite and Grey Mist (this review sample), so you can choose a colour that fits your décor better. Around the back is 3.5mm jack and USB-C connections.

The most interesting ‘new’ feature of the Beolit 20 is its Qi wireless charging functionality. Once enabled in the B&O app, and if your smartphone supports the feature, the Beolit can charge the device’s battery.

I suppose it’s useful when outside and, given the Beolit 20 launched at the same price as the Beolit 17, I imagine it’s more of a nice, added-value feature to have than something that feels vital. It’s added convenience.

The presence of the Qi charging feature is down to gains made in the speaker’s battery life that boost it from up to six hours to up to eight hours – a jump of around 30% at normal listening levels. There’s no IP certification, but B&O describes the Beolit 20 as weather-resistant, so it will likely withstand a little wet weather – but potentially not a significant amount.

Two Beolit 20s can be stereo paired (if your pockets are deep enough), and if you have a Beolit 17 then stereo pairing works across generations, too. In terms of connectivity, it’s Bluetooth 4.2 (aptX with AAC and SBC codecs); there’s no Wi-Fi available. That puts it at a distinct disadvantage next to the Sonos Move, given the latter model’s similar outlook and price.

Much of the Beolit 20’s functionality is tucked away in the Bang & Olufsen app. It’s here where updates served to the speaker enable Stereo Pairing, you can flick through the Listening Modes (Optimal, Ambient, Party, Speech and Favourite) and customise the sound through the Beosonic feature.

Beosonic is initially interesting, but playing with the options (in a slickly intuitive way, I should add) set me up for disappointment. Energetic sounded good and Bright was decent, but Relaxed and Warm underwhelmed.

Other features in the app include toggling Qi charging on/off and viewing battery status. One issue I had was the app becoming unresponsive whenever I jumped to another app and came back. I get the impression this was more to do with my smartphone than the app itself. Otherwise, operation was slick, as seems to be the case with B&O’s products.

Sound quality is where B&O often excels, and that’s mostly the case with the Beolit 20. B&O describes it as big and powerful, and that depicts the speaker’s acoustic talents to a tee.

However, the Beolit 20’s performance is a tale of two speakers: one that works in indoor settings and one that works outside. Trying to get a balance between the two can be tricky.

What works regardless are vocals. Vocals have a smooth and musical quality overall, and playing Anette Askvik’s Liberty, her voice is blessed with clarity, detail and dynamism. Another ‘however’ is required, though, since those adjectives are best felt with less busy tracks where vocals are the focus, and the tempo is slower.

The Beolit 20 does boast a prodigious amount of low-end weight in the piano notes of Max Richter’s Voices 2 album (Tidal). Bass extension is deep, resonant and powerful on tracks such as LMP’s Yellow, Tom Holkenborg’s Flash, Space to Win / Our Legacy Is Now and Takuya Kuroda’s Fade (feat. Corey King).

Kuroda’s ABC is the sort of track the B&O Beolit 20 enjoys – music that’s upbeat, energetic, and with a compelling sense of momentum and rhythm. Turn up the volume and the wireless speaker produces a coursing sense of energy, although I feel detail – particularly sharpness in the mid-range – isn’t wrung out with the finest sense of fidelity.

And there’s a sense of volume ramping too with the Beolit 20, similar to the Beosound Balance, which harks back to the statement I made about the ‘tale of two speakers’. There’s a point where a nudge up on the volume control fires a barrel-load of energy at the listener. A couple of nudges down and that energy dissipates and dynamism is reduced. Higher volumes seem suited to outdoor use, while lower volumes are more in tune with an indoor setting.

There isn’t much width to the soundstage, which makes music compact at the best of times. The presentation of The Weeknd’s Blinding Lights feels rather flat in terms of depth, too, with separation of the track’s elements not really the Beolit 20’s forte.

But the Beolit 20 is tremendously entertaining when it’s on song. The warmth of its tone appeals (even if it creates a slightly thick presentation), and the cover of Black Hole Sun from the Westworld soundtrack or Joe Hisaishi’s Innocent produces tonal variations in the piano notes that make for a more varied and richer listen than some wireless speakers are capable of.

If you’re after a sound with a more balanced tone, the Beolit 20 isn’t the wireless speaker for you. There’s a compromise or trade that needs to be met – thunderous energy and dynamism at higher volumes, or a more focused and at times detailed performance at lower volumes. The price also brings the B&O into clearer perspective, with the Sonos Move less expensive and more neutral in its sonic signature.

If you’re a fan of B&O’s design and approach, there’s an enjoyable time to be had in the Beolit 20’s presence. If you’re after a less expensive, better balanced, and more portable speaker, then B&O’s own Beosound A1 2nd Gen remains an absolute corker. 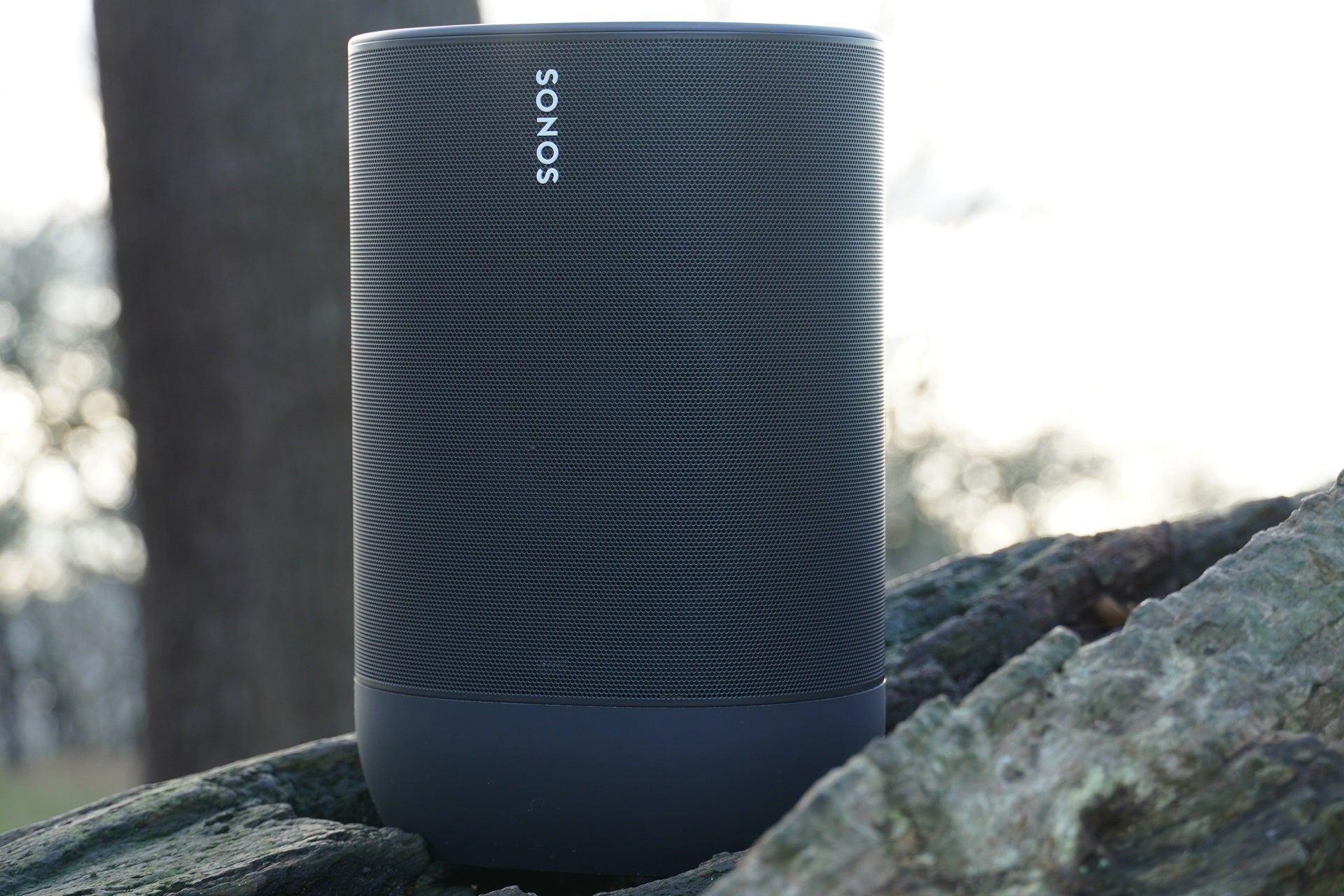 If you enjoy bags of energy and big bass The Beolit 20 is no shrinking violet with its weighty low-end performance and its capability of summoning lots of energy at high volumes.

If you want a more balanced output Trying to find a balance between high and low volumes is tricky. There’s an element of volume ramping, so tracks that work well at lower volumes don’t fare as well at higher volumes and vice versa.

The Beolit 20 is typically Bang & Olufsen. Stylish looks, energetic sound and a premium price. The addition of Qi wireless charging brings some added convenience, but the sound quality isn’t the most balanced, and it’s on the big side for those after a portable speaker.

What’s the difference between the Beolit 17 vs Beolit 20?

The main difference between the speaker is that the Beolit 20 offers longer battery life (eight hours to the Beolit 17’s six), and it also features Qi wireless charging functionality.