How do you know when you’ve had a great idea? In most cases, it’s not apparent until you put said idea into action whether you’ve been blessed by a moment of genius, or you’ve suffered a complete and utter lapse in judgement. Occasionally, however, even seeing the end result of your nugget of wisdom isn’t enough to distinguish between the wheat and the chaff.

The first Badland back in 2013 made something of an unexpected splash on the App Store, winning awards aplenty and plaudits from the critics in the weeks after its debut. In part, that was because Frogmind had the nous to drip feed both gamers and the press alike trailers aplenty in the weeks ahead of its release, and partly because its silhouette like appearance delivered an experience that was undeniably stunning. The gameplay, however, was a little vanilla. 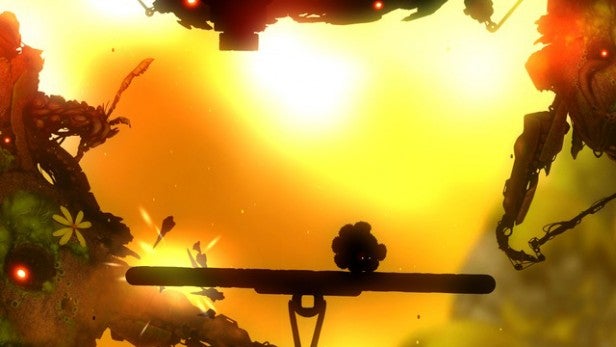 The original Badland was a 2D maze to all intents and purposes, where holding the finger down on either side of the screen caused the black blob that served as the game’s lead to fly in the corresponding direction, with avoiding obstacles before the screen caught up and wiped you out the order of the day.

Badland’s stunning looks dressed said gameplay in some particularly impressive clothes, but as soon as you stripped said superficial elements back, the somewhat one dimensional nature of its gameplay became all the more apparent. There was nothing ‘bad’ about the original Badland, name aside, but repeated play revealed that it wasn’t quite the radical platformer some had made it out to be.

So, is Badland 2 – a more fleshed out version of the idea the first game also had a damn good crack at – an entirely wise decision? Could Frogmind really take an idea that was lacking the first time out and turn it into something special?

When it comes to answering this question, it’s important to remember that, as with the first Badland, looks can be deceiving. On first glance, the whole affair looks to be something of an improvement, with an added sense of dynamism complimenting additional modes of play. Scratch beneath the surface, however, and it becomes apparent that in practice, not all too much has changed. 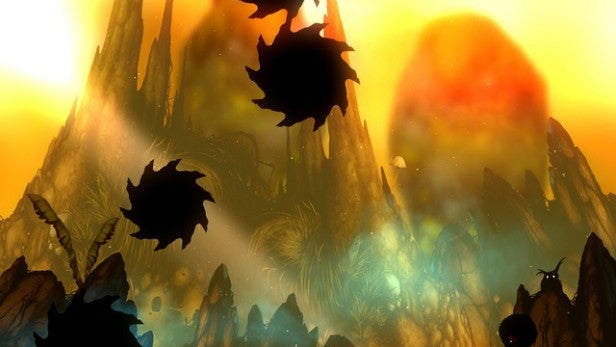 The basic concept behind the game will feel instantly familiar to Badland fans: controlling the very same black blob and using his pair of arms as wings, your main job is to guide him through a series of stages without coming a cropper, tapping the screen to head skywards and letting go to drop towards the floor. Successful runs are a case of finding the balance between the two as the screen shifts across – or sometimes down – in constant fashion. Succumb to any of the traps on offer, most of which involve spikes in some way, or simply let the screen catch up and push you out of the action, and you’re sent back to the level’s last save point, usually a matter of seconds before.

Just as in the original, power ups are almost forced upon you as you travel along the linear stages, some making you bigger, others shrinking you right down to size, and others turning your one blob into scores of other blobs, most coming to the end of their lives in seconds like sheep on a minefield. All these power ups, however, are perfectly designed to fit the stretch of the stage they sit in, meaning the whole thing flows by especially easily. Maybe a little too easily. 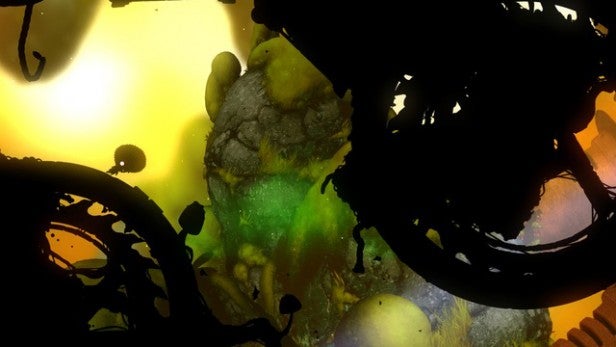 Indeed, if you could accuse the first Badland of being packed full of elaborate set piece where the player is little more than a spectator, then Badland 2 is equally guilty of such crimes. There’s no denying that watching play in action is quite mesmerising, but then at the same time, parts of play fly by with such little input that they feel designed to do nothing more than flatter the development team behind them.

To put things bluntly, though it’s hard to pin down exactly what Badland 2 gets wrong, just like its predecessor, it simply isn’t all that fun once the gloss of the way play looks rubs off. 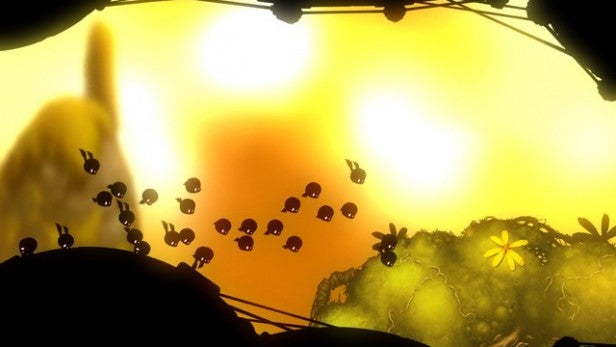 Once again, however, it takes the passing of time and a modicum of honesty to admit that, beneath the game’s visual splendour and the great care and talent that has gone into its delivery, everything is a little average. There’s no denying that Frogmind has gone to admirable lengths to take an idea that bore much critical and commercial fruit the first time around and turn it into something more substantial – the new online challenge modes, where you attempt to out perform players from all over the globe in set levels, are exactly what Badland 2 needs to do to keep people engaged – but when the founding idea behind it all is itself lacking, all the will in the world can’t transform the ordinary into the awesome.

Verdict
Looks can deceive, and while Badland 2 is one of the best looking games on iOS you’ll ever come across, the game behind it remains a tepid affair, where the player is frequently a spectator in whole sections of play designed to wow them rather than challenge them.