In the world of IP network cameras Axis has an enviable record of delivering more World’s firsts than anyone else and it does it yet again by claiming the 207 as the smallest network camera to incorporate MPEG-4 image compression. Size counts in the surveillance game and we certainly can’t argue with Axis as the 207 uses the same palm-sized package as its 205 and 206 models.


The 207 is only for indoor use and is equipped with the same 1/4in progressive scan RGB CMOS sensor as the 206. However, low light handling has been improved as the 207 can function down to 1-lux as opposed to the 4-lux of its compatriots. Note that as light levels decrease the camera will automatically switch from a colour to a mono image. Frame rates don’t see any improvement but they are still very good as the camera can deliver 30fps at all seven resolutions.


The 207 also has a couple of aces up its sleeve as it supports full motion detection and has an internal microphone for one –way audio. A 10/100BaseTX Ethernet port underneath the camera body handles the network connection and power is provided only by an external transformer – the 207 does not support PoE (Power over Ethernet). The 207 also has a small four-pin terminal connector at the rear which can be used to connect input devices such as a push button on a door and link it to an output device such as a relay for triggering, for example, an alarm or a door lock. 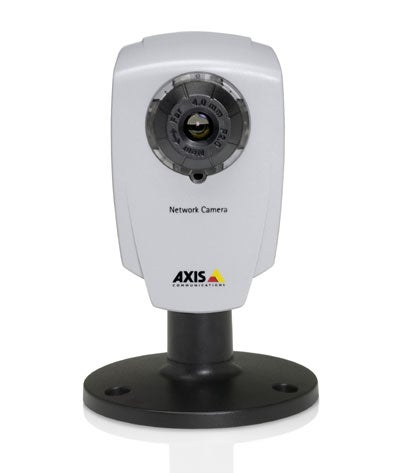 The bundled IP Utility makes light work of installation as it searches the network for Axis cameras and displays them ready for initial configuration. You can use DHCP or assign a static IP address and use the Axis dynamic DNS service for assigning a host name to the camera for easy access over the Internet. Note that the camera does not support secure connections over HTTPS. The home page opens with a live view and you can swap between Motion-JPEG and MPEG-4 formats and increase and decrease the window size. Three buttons underneath allow you to stop playback, take a quick snapshot and swap to full screen viewing.


Image quality is what makes Axis’ cameras stand out from the competition and the 207 is no exception as focus is very sharp while colour balance is very good. There are a number of cameras in this price range that offer pan and tilt functions and it’s here that you have to decide whether this is more important than quality. A comparison with Panasonic’s diminutive BL-C10 shows clearly that any gain in features has to be offset with poorer image quality. Comparing the 207 with Sony’s more costly SNC-M3W shows this even more clearly as the 207 beats the pants off it for sheer quality.

MPEG-4 mode offers a number of controls over network usage as you can control the bit rate by restricting it to a value in kbits/sec if there is limited bandwidth available. The variable bit rate setting could be useful when watching areas where there is minimal activity as the camera will drop the rate when nothing is happening. Motion detection is a cut above the rest as up to ten custom areas can be specified within the image where motion is to be detected or ignored. You can decide on camera sensitivity and the length of the trigger once it has been activated. Actions extend to downloading images at specific frame rates to an HTTP or FTP server and these can be emailed to multiple clients as well. 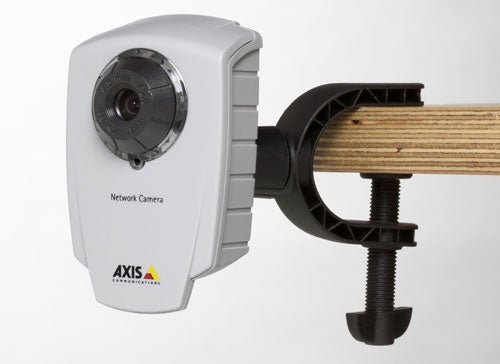 To test bandwidth utilization we hooked the 207 up to a shared Fast Ethernet segment and used Sniffer Professional to measure consumption. With Motion-JPEG selected a single client took up nine per cent of available bandwidth which rose to fifteen per cent with a second client added. The benefits of MPEG-4 are immediately apparent as in this mode a single client drew two per cent which only rose to four per cent with two clients. As always there is a drawback as all PCs using MPEG-4 will need a valid license. The camera comes with one decoder and encoder license and you can purchase further packs of ten licenses from Axis.


Axis also bundles its ACE (Axis Camera Explorer) software which is a simple add-on component that snaps into Windows Explorer allowing you to swiftly access multiple cameras. It’s easy enough to add a new camera and you can also include the feeds of up to four cameras in one screen, create objects that can switch from one unit to another after a set dwell time and include feeds from FTP servers that are being supplied by images from other cameras. The camera feed can be recorded as a sequence of JPEG images or stored in an album object as a single file that can be replayed and used to create an AVI movie file.


If a high image quality is more important than pan and tilt functions, the 207 Network Camera is a top choice. You simply won’t get any better at this price.