Not content with delivering the world’s first megapixel network camera to market Axis Communications ups the ante even further by launching the first two megapixel which delivers a remarkable top resolution of 1,600 x 1,200 pixels.


The price tag will certainly cause many a double-take but check out the features list first before judging the 223M. The camera is focused primarily on surveillance operations that require facial identity. We’ve all seen enough grainy, barely recognisable images on the evening news to know this is a big issue. The camera is a much bigger box of tricks than the diminutive megapixel 207MW and is enclosed in a solid brushed aluminium full metal jacket. The lens is a Computar F1.4 varifocal which screws on the camera body and you plug its cable into a small receptacle to one side to power the iris. The camera targets 24 hour surveillance and can operate in light levels as low as 0.2lux for mono images and 1.5lux for colour. The latter ability isn’t anything special so expect most low light images to be in mono. However, the camera can work with Axis’ optional infrared illuminators so nothing will be able to escape its gaze at night. 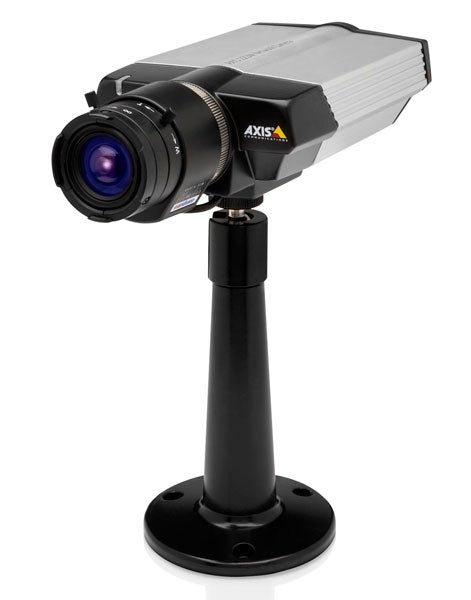 There’s much more on Axis’s menu as the camera simultaneously supports Motion JPEG and MPEG4 compression. Be aware that although the latter supports unlimited users you only get one decoder license included and will need to buy extra ones for each user. Axis currently sells ten user license packs and these cost around £65. We approve of the support for PoE which means that camera placement isn’t constrained by power socket locations and can now be positioned up to 100 metres from a suitable PoE switch. We tested this function with a Hewlett Packard ProCurve 2626-PWR and had no problems powering the 223M over a standard Ethernet cable.


The camera has an internal microphone and sockets for an external loudspeaker and microphone and supports half duplex audio so you can have a conversation with the person on the receiving end. As always, audio lags behind the video feed by around a second but we found general quality to be good with background noise not causing any significant interference. One big casualty is the frame rate which takes quite a nosedive at the higher resolutions. Motion JPEG offers the fastest rates but at 1600 x 1200 this drops down to only 9fps resulting in very jerky movement.

For initial network installation you load the bundled IP Utility which searches for cameras on the network and presents them ready for configuration where you can move directly to the tidy web browser interface. This opens with the live view and we can safely say that Axis does it yet again as the image quality is up to its usual high standard. You’re going to need a big screen to use the top resolution without using the scroll bars and even at 1280 x 960 we couldn’t fit it all on a 21in monitor.


Overall colour balance is particularly good, focus is sharp with no discernable artefacts and the camera reacts well to changing light levels. Our only complaint is the camera focus and zoom need to be manually set using the pullers on the lens. The zoom wasn’t a problem but the focus puller is so sensitive it took quite a while before we were happy with the image quality. 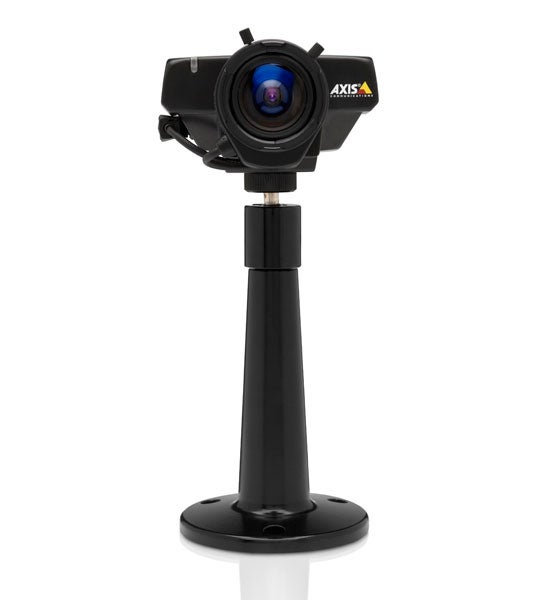 Surveillance in sensitive or secure areas is a possibility as you can restrict the live view to HTTPS only. Local usernames and passwords can be used, access can be restricted to a list of IP addresses and the camera can integrate with 802.1x port based authentication. However, you’ll need an external RADIUS server and a network switch that supports 802.1x and can inspect certificates passed to it by the camera before it will open up a port to it. 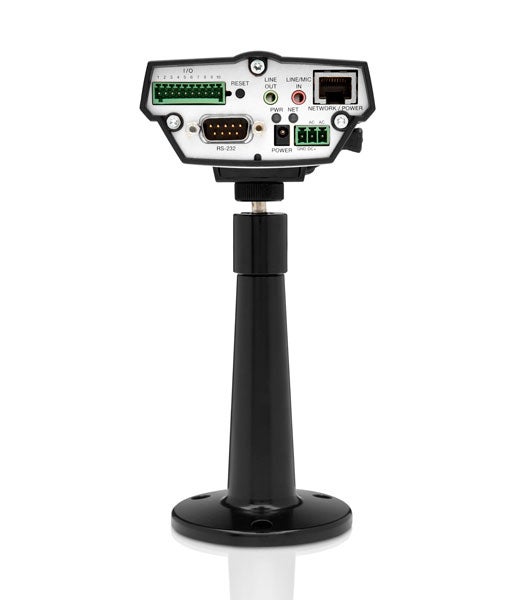 Event triggering simply doesn’t get any better as you can set off image capture using motion detection, the IR filter for if the lights go out, noise thresholds, any one of the multiple inputs the camera supports and even temperature. When an event occurs the camera can download images at specific frame rates to an HTTP or FTP server and mail them to multiple clients as well.


For motion detection you can configure up to ten custom areas in the image where motion is to be detected or ignored and slider bars allow the sensitivity and the size of the object that will trigger detection to be set. The 10-pin I/O plug at the rear allows plenty of external devices to be connected and controlled by the camera and a separate power supply such as a UPS can be added as well. The camera is also bundled with a conventional power supply offering a 3 meter cable.


There’s no denying this is an expensive network camera but if you want the biggest live view currently on the market then the two megapixel 223M is the one for you. The manual focus is a bit fiddly but image quality can’t be beaten and neither can the range of surveillance features and event triggering options.

(centre)Axis delivers the best image quality and even at 1280 x 960 pixels the picture is huge.(/centre)”’

”’(centre)Motion detection is particularly good and can be customised using ten different areas within the image.(/centre)”’

”’(centre)The camera offers extensive security where you can ensure all feeds are encrypted.(/centre)”’

”’(centre)There are plenty of resolutions to choose from and the image can be customised with overlays.(/centre)”’