In the world of IP cameras Axis Communications has consistently been the one to beat for innovation and image quality. We’ve reviewed enough of its products over the past year to confirm this with the miniscule 207W delivering support for 802.11g wireless networks and the 225FD offering a smart external surveillance package in a bullet proof casing.


As its moniker suggests, the latest 212 PTZ offers pan, tilt and zoom functions but its claim to fame is that it achieves this without any moving parts. How does it do it? Simple really, as it employs a Fujinon 2.7mm wide angle lens. The viewing angles are impressive with a span of 35 degrees to 105 degrees in the vertical plane and 44 degrees to 140 degrees in the horizontal. This approach has a number of bonuses as you can change your viewing area almost instantly and with no moving parts, wear and tear is eradicated. The downside is the zoom capability as the camera only offers a 3x digital zoom. However, it does have a 3.1 megapixel 1/2in. CCD sensor and Axis has implemented over-sampling so image quality shouldn’t suffer from the deterioration you’d normally expect to see with digital zooms. 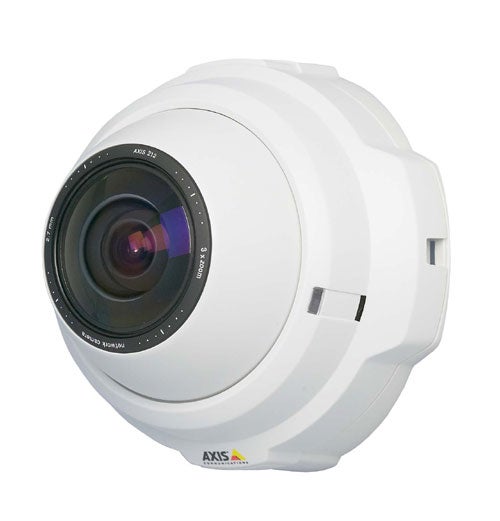 As we’ve comes to expect from Axis, build quality is a cut above the rest with the camera body constructed from solid aluminium and shrouded in a tough plastic cover. You also get an extra wall mount which allows the camera to be fixed at an angle, while the cover has removable inserts to allow network and power cables to be routed through the side. Placement possibilities have been improved as the power supply has a generous two metre lead and you get a 180cm extension cable as well. Even better is the fact that the camera is 802.3af PoE compliant so it can be powered directly over the network cable using a suitable switch.


It has an internal microphone allowing you to hear what’s going on in the area under view but also offers audio out sockets for an external microphone and speaker for two-way conversations. During testing we found audio operations worked well enough as we were able to hear voices clearly at the remote location but they were out of synch with the video feed with a lag of over one second. The camera also incorporates Axis’ standard four-pin I/O connector block that can be used to link the camera to external security devices such as door sensors or alarms allowing them to trigger video capture or an external alarm if activated.

The bundled IP Installer utility makes light work of network installation as it searches for and displays all discovered cameras. From here you can change the camera’s IP address or go directly to the web interface. Access controls are good as a user list determines one of three levels of access to the camera. The home page opens to a live view along with control bars along the side and bottom of the image for the pan, tilt and zoom functions. The view can also be changed using the mouse pointer inside the view panel while a joystick option allows you to scan around with the camera following the mouse pointer.


The Motion-JPEG option allows up to twenty users to access the camera simultaneously and although MPEG4 mode has no limits you only get a single decoder and encoder license included so you’ll need to purchase more from Axis. To reduce bandwidth consumption you can opt for lower resolutions or increase image compression and you can also determine the length of time the video stream is active. 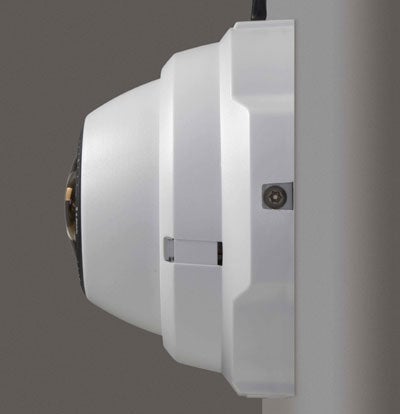 As the lens is a fish-eye variety you will get the curvature associated with these when on full wide angle viewing but the image itself is particularly good with a sharp focus and excellent colour balance. With only a 3x zoom to play with you can’t move in close to distant objects but we did find that image quality didn’t deteriorate at all on the highest setting. However, don’t buy this camera for night time surveillance as it can’t function in less than 10 lux and will be of no use even in low light conditions.


A guard tour feature makes good use of the fact that the camera can move to different areas at a rate of 400 degrees per second. Using the on-screen PTZ controls you move through the moving area and save each one as a predefined position. We created a guard tour list of eight positions and watched the camera move through them easily, even when the delay was as quick as one second. Axis’ motion detection has always been amongst the best as you can define up to ten areas where motion is to be detected or ignored. Sensitivity and trigger length after activation can be modified and actions extend to downloading images to an HTTP or FTP server and emailing them as well.

”’The bundled IP Utility makes initial installation a cinch as it hunts down Axis’ cameras for you.”’ 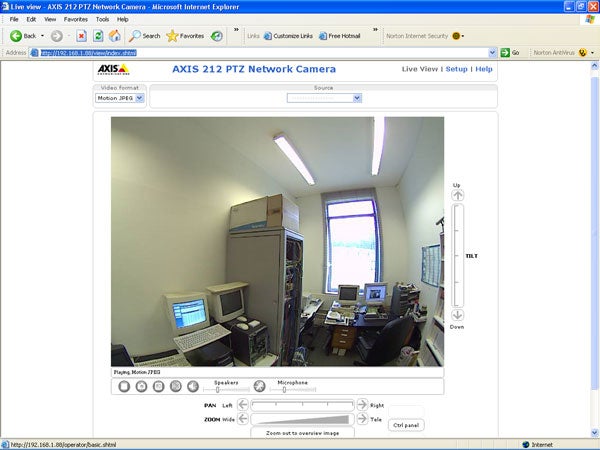 ”’Curvature from the fish-eye lens is very evident in wide angle mode but overall coverage is very good.”’ 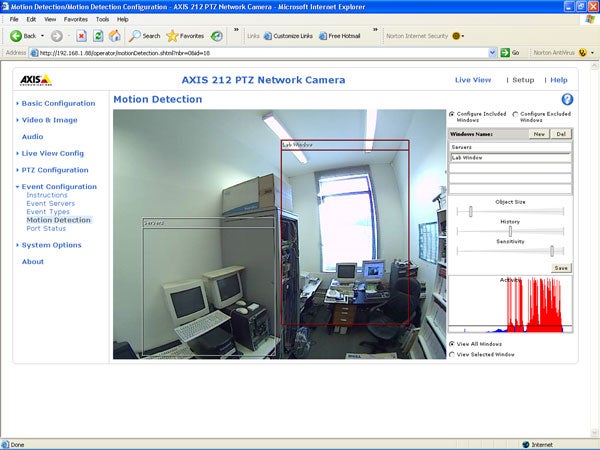 ”’Motion detection options are superior to much of the competition.”’

”’Both Motion-JPEG and MPEG4 compression are supported with latter offering extensive bandwidth controls.”’

”’The Guard Tour feature offers a whirlwind ride through your chosen preset positions.”’