I was quite impressed with AVM’s bizarrely named Fritz!Box Fon WLAN when we looked at it last year and the latest 7140 version builds on its successes by introducing a range of new and useful features. A key function of this router is its ability to deliver extensive VoIP functions using SIP as it operates as a two-port PBX, enabling calls to be made over the Internet and landlines as well.


The older model only has a single network port but the 7140 comes equipped with a 4-port Fast Ethernet switch. The USB port was originally used for directly connecting a PC using the bundled Windows drivers but this is now a host port and is used for connecting USB storage devices or printers. However, we were surprised to see that this is only a USB 1.1 host controller so performance for file copies is going to be seriously strangled. Wireless features haven’t changed as the 7140 also incorporates an 802.11b/g access point which supports 125Mbps g++ speeds as well. 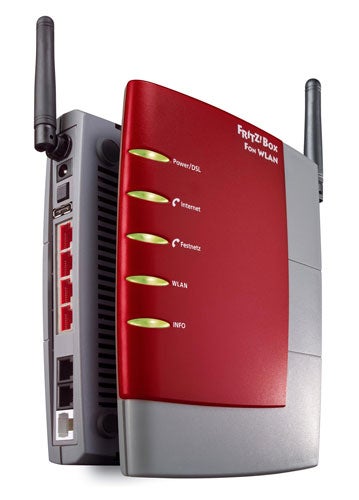 Squeezing in the four Ethernet ports has required a rear panel redesign so the ISDN/analogue port has gone to be replaced with a somewhat cumbersome cabling arrangement. The kit includes a Y-cable for combined analogue and DSL operations where the lower RJ-45 connector is plugged into the router’s DSL port and the Y-branches go to the subscriber unit and splitter. Unfortunately, both branches are terminated with RJ-11 plugs so you may need a converter to link to a splitter. Last but not least is a small button next to the USB port which enables you to manually switch the wireless access point off and on. The DSL LED has also been replaced with a WLAN indicator so you can see at a glance if the wireless access point is operational.


Installation got off to a better start this time as AVM ensured the router had the correct firmware loaded for supporting UK ADSL lines. A quick start wizard makes extremely light work of the Internet connection as it automatically sniffed out the VPI and VCI values for our BT Broadband link and correctly worked out that we were using PPPoA. All we had to do was provide out account details and we were up and away in seconds. VoIP configuration was just as easy and we tested this with our Sipgate (www.sipgate.co.uk) account. We just needed to enter our Internet phone number, account ID and password plus the SIP registrar URL and we were making VoIP calls a few minutes later.

The web interface hasn’t seen any major improvements but it doesn’t need any as it’s smart enough already. It opens with a port status overview plus options to view a list of incoming and outgoing calls, create a phone book, monitor Internet traffic and the event log and check on connected USB and network devices. All access to the SPI firewall is denied so this cannot for any reason be switched off. The VoIP functions are virtually identical to this router’s predecessor so rather than waste space here we recommend taking a closer look at our earlier review of the Fritz!Box Fon WLAN for more information on these features.


To test the USB functions we kicked off with a bunch of Flash memory sticks and found the router correctly identified all six without any problems. They must be formatted with FAT or FAT32 partitions and the method of access is rather smart as you simply click on the device as shown in the web interface and the router fires up a browser FTP session with it. From here you can copy files to the device and download them to your PC and for permanently connected storage devices you can set read only access and password protect them as well. As expected, performance was very poor as copying a 100MB collection of graphics files to a memory stick from a LAN PC delivered a paltry 4Mb/sec. We tested the USB printer function using an Epson Stylus 950 which worked fine with the new printer port although, as always, with these solutions we lost the status monitoring features. 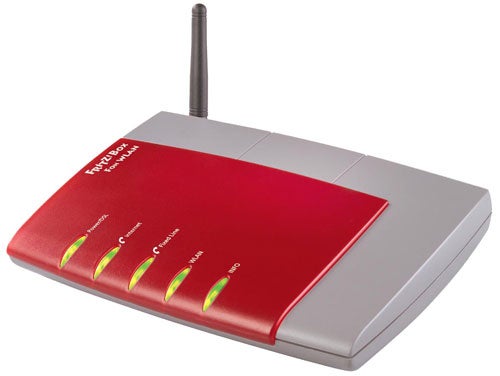 The USB port has a tertiary purpose that AVM coins ‘Stick and Surf’. You’ll need one of AVM’s Fritz!WLAN USB sticks which you plug into the router whereupon it downloads all wireless channel, SSID and security settings. Once the Info light has stopped flashing you can remove it and pop it in your laptop. We tested this on a Fujitsu Siemens 1.6GHz laptop running XP SP2 and found that literally all we had to was insert the adapter. The drivers and connection utility are loaded from the stick, the wireless connection is configured for you and it’ll even open up a browser connection to router’s web interface – very slick indeed.


AVM delivers a superb range of VoIP and PBX related facilities in a compact router that’s extremely easy to install and configure. It’s a pity the USB port is the slower variety but this is still a useful addition and the ‘Stick and Surf’ function is rather smart as well.

The CD-based setup wizard automatically identifies most of your ISP’s ADSL settings.

The router keeps a running tally on all Internet related activities.

‘Stick and Surf’ is a cinch to set up and the wireless adapter utility is automatically installed with no user intervention.

It may only be a USB 1.1 port but inserted storage devices are easily.

AVM provides a bumper bundle of tools and utilities with the router.