It is the new flagship DSL router from German networking giant AVM, superseding the Fritz!Box 3390 (which will remain on sale). With the 7490 the big news is the inclusion of 802.11ac for the first time in AVM’s range and it comes with so much integrated telephonic, office and media functionality that there is nothing quite like it. If you need a router that has almost everything (including an integrated modem) you’ve come to the right place.

On the outside little appears to have changed. The 7490 still looks like a prototype Thunderbird with its curved lines, matt red and silver paint job and antenna hiding fins. We find its looks a little polarising (somewhere between kitsch and charmingly retro), but there’s no doubt it has character and while the chassis is a composite of various plastic panels it feels sturdy.

Inside the headline feature is the addition of 802.11ac Wi-Fi and AVM has given it the full fat 1300Mbit treatment while backing it up with 450Mbit 802.11n. This brings the range wireless parity with its premium rivals, but where it really stands is elsewhere.

From a networking perspective it ticks all the boxes: there’s an integrated modem compliant with both VDSL (fibre) and ADSL2 broadband plus IPv6 and VPN support, 4x Gigabit Ethernet and 2x USB 3.0 ports. There’s also WPS and WPA/WPA2 security but curiously no WAN port meaning you’ll need to give up a LAN port for it.

On top of this the 7490 incorporates a telephone system. The unit itself is a DECT base station for up to six cordless analogue, ISDN or IP based telephones. It supports HD telephony for better call quality, has no less than five digital answering machines that email recorded messages (voice-to-mail) and fax reception with email forwarding (fax-to-email).

Next the 7490 has an integrated media server and ‘Fritz!NAS’ functionality. The latter lets you network folders and group files from connected devices directly through the router enabling the former to stream and prioritise content around the home via DLNA.

Lastly comes a vast array of smart energy monitoring. The 7490 can report and adjust the power consumption of virtually every element of its functionality, toning it down on a schedule or switching down or off ports you don’t use. As such it is not just one of the most well featured routers we’ve seen, it is also the greenest. 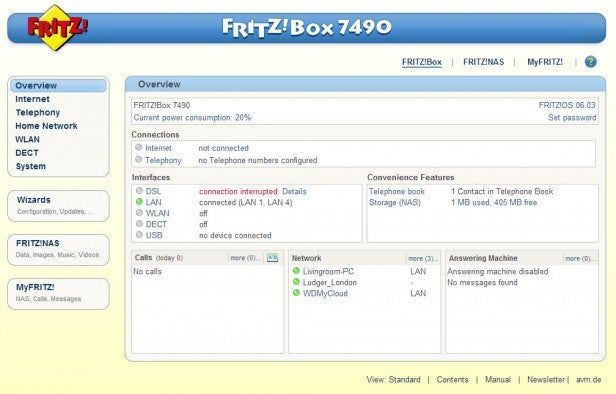 Of course such a vast array of functionality will leave many enthused but also intimidated at the prospect of setting it all up and sadly AVM doesn’t makes things as easy as it should.

Unnecessary complications hit you from the very start with AVM combining the 7490’s wireless on/off button with WPS. The theory is a short press to toggle Wi-Fi and a long press to toggle WPS, but we still found ourselves switching the Wi-Fi off when trying to connect devices. The lack of a dedicated WPS activity light doesn’t help matters.

The good news is once connected the 7490 has a CD-less setup. It opens a browser window at its default IP (192.168.178.1) and asks you to configure your Internet settings and passwords. The problem is it stops there and there remains much to do that you will have to sort out by digging through the menus.

This isn’t helped by an array of odd factory defaults. The most obvious are transmitting the 5GHz and 2.4GHz signals as a single SSID (something only changeable by digging through the easily missed ‘Advanced’ menu options) and setting all LAN ports to low power 10/100 Fast Ethernet rather than 10/100/1000 Gigabit Ethernet (again a fiddly setting to change).

It is a similar story with the ‘Fritz!NAS’ which has no setup wizard, making for a lot of trial and error for newbies, and the whole UI – while fairly clear – is somewhat dated and (like the router itself) garish.

We’re big fans of the huge amount of functionality AVM has crammed into the 7490, but it needs to makes things easier to get the most out of it.