If you’ve been involved with video editing for any length of time, you will know that Avid is such an important company in this field that its brand has almost become a verb. So it’s strange that the attempts Avid has made in the past to take its reputation amongst professionals down to a consumer audience have been half-hearted at best. With Avid Studio, however, the company is making its most serious foray yet, perhaps inspired by Apple’s repositioning of its Final Cut Pro as Final Cut X, aimed at serious enthusiasts rather than professionals.

It’s worth noting that Avid bought Pinnacle Systems, makers of Pinnacle Studio, and Avid Studio is based on the same software engine. However, both Studio applications will continue to coexist (we’ll be reviewing the latest Pinnacle Studio in a future week) and are quite clearly aimed at different levels of user. The Pinnacle-branded version will continue to cater for the novice, whilst the Avid iteration provides a greater power for the “prosumer” editing enthusiast. There are a couple of wizards available for automatic movie and slideshow creation included in Avid Studio, but these are more like afterthoughts, and we’d be surprised if most purchasers would ever use them. 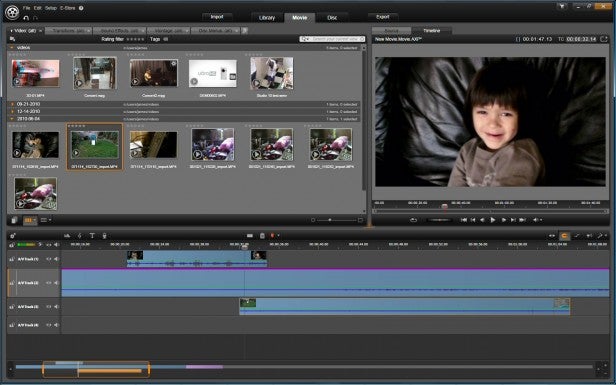 The main app focuses on editing power, as you would expect, and the interface is very different from Pinnacle Studio, with a number of unique features. The process is divided up with tabs along the top, which is now a ubiquitous configuration for consumer video editing apps. These offer import and export at either end, with the media library, movie editing mode, and disc creation tabs in the middle. But there are enhancements and significant differences all along the way. 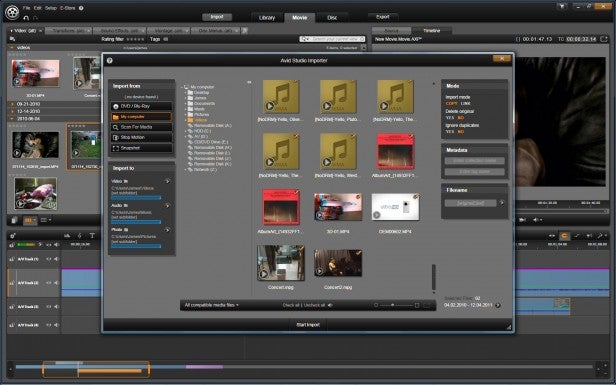 The Importer is a pop-out dialog which unifies bringing in footage from every conceivable camcorder type. This includes grabbing footage from DVD or Blu-ray (copyright permitting), as well as the plethora of solid-state camcorder formats now available. The dialog is slightly different for tape-based media, as analog devices will give you compression options and DV or HDV camcorders will be provided with tape transport controls. There’s also stop-frame import from any attached video device, so you can grab individual files, which the importer will then stitch together into a single video clip, or a photo series, or both.

Not surprisingly, Avid Studio’s biggest capabilities come during editing, however. We particularly like the way the timeline handles long, complicated edits. You can zoom in and out, scrub and scroll along the timeline, but a thumbnail-style schematic of the entire timeline always remains at the bottom of the screen. An orange box shows which segment of the timeline is currently being viewed, so you always know where you are within the edit.

It’s not an entirely unique feature in the video editing world to have a mechanism like this, but the schematic can’t be found elsewhere, and really helps you get your bearings. This is particularly handy, as Avid Studio supports an unlimited number of audio and video tracks, so your edits could get complicated. 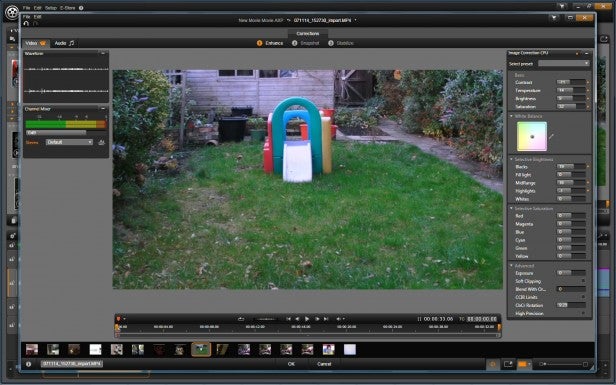 Another unique feature, particularly in consumer-oriented software, is the way Avid Studio lets you apply corrective effects to clips whilst they are still in the library. This includes image adjustments like contrast, temperature, brightness and saturation, plus white balance, and you get detailed control over blacks, whites and mid-tones, as well as CMY and RGB colour. There’s even a separate exposure control, plus CbCr Rotation.

You can take snapshots of the whole or part of the frame, and there’s a user-configurable software image stabiliser available as well. When you apply these effects in the library, any instance of the clip or a portion of it you put on the timeline will be affected. This saves the time required by adding the effects multiple times, and no other consumer-grade editing app gives you this facility. 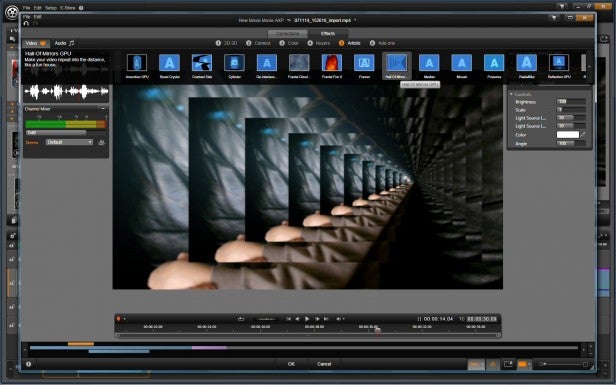 Even more filter options are available for clips once they are on the timeline, however. Avid Studio doesn’t follow the conventions of most video editing apps, as you don’t just have a library of effects you can drag to a clip on the timeline. You can also open up the editing dialog for a clip, which provides combined trimming and effects.

The effects categories are listed along the top, and clicking on one applies it, so its parameters appear on the right-hand side of the dialog. All the effects you have applied will be listed, with an orange box showing which one has its parameters visible. Effects can be keyframed, although there’s no sophisticated keyframe graph available like Adobe Premiere Elements provides.

The range of effects is extremely extensive, and has been augmented with a rather large bundle of third-party plugs from Red Giant, which Avid claims have a $2,000 value in total. The Knoll Light Factory lets you add sophisticated lens flare effects, whilst ToonIt converts your footage to a cartoon-like appearance. The Trapcode Shine, Particular and 3D Stroke add extra lighting effects, an animated particle system and strange three-dimensional drawing. Red Giant’s highly regarded Magic Bullet Looks is also included, for creating the appearance of classic film and TV transmissions, although the latter has its own separate dialog and can’t be keyframed. 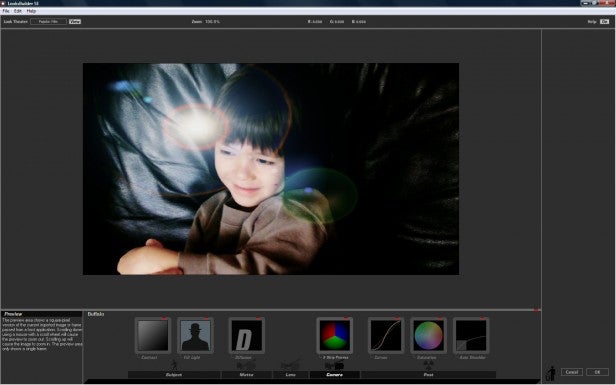 A pretty extensive array of transitions and a library of sound effects are also included, as well as a massive selection of 3D montage presets for creating effects like multi-frame video walls and framed footage flying around the screen. The Scorefitter loop-based soundtrack system has also been included, so you can add royalty-free backing music which precisely fit the mood and duration of your edits. You even get a sheet of greenscreen material in the box, for creating your own chroma-keying effects. 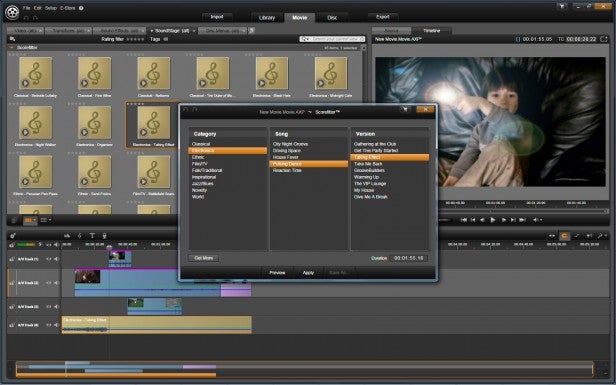 Output options aren’t particularly groundbreaking, but they are comprehensive. You can output a file, including Flash video, AVCHD, every flavour of MPEG, and even RealMedia if you’re feeling a little retro. Web output options only stretch to YouTube, however, although there are presets up to 1080p Full HD, and the software will render and upload directly from the timeline automatically. You can burn to DVD, Blu-ray, and even AVCHD DVDs, and disc menu authoring is built in, with a healthy library of design presets available. 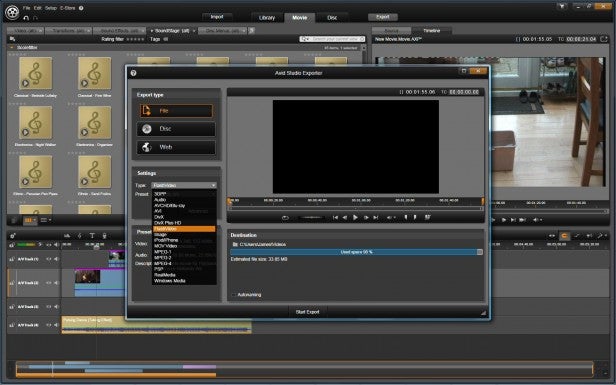 However, this initial release of Avid Studio does miss out one currently very trendy feature – 3D. Whilst we still consider this to be a bit of a fad, it’s definitely something the video enthusiast may want to play around with, so its complete absence is a disappointment – especially considering that CyberLink PowerDirector 10 has extensive support and Sony Vegas Movie Studio HD Platinum 11 has a decent set of 3D tools as well. Avid Studio is also not a 64-bit app (where many competitors have now moved over), and you occasionally notice that it’s not 64-bit when handling lots of AVCHD.

The lack of 3D support means we can’t unreservedly recommend Avid Studio, but this is still impressive for an initial release, especially considering how many versions Adobe Premiere Elements went through before really finding its identity. This is also a relatively pricey video editing app, costing at least £10 more than Adobe Premiere Elements 10 or CyberLink PowerDirector 10, and twice Sony Vegas Movie Studio HD Platinum 11. Mind you, numerous extra plug-ins are included as well as the greenscreen. So as long as you make good use of these features the software is actually decent value, and a powerful, capable video editing application. We can’t wait to see what version 2 has to offer.