So you’ve just bought a high-definition console, but you don’t want to shell out on a high-definition television since you already own an HD-ready computer monitor. Or you’re tight on space, and would like to be able to watch Freeview digital and analogue TV channels on the same display that’s hooked up to your PC. AverMedia claims to offer a solution in the form of its AVerTV Hybrid STB 1080i, a box that has integrated digital and analogue TV tuners, throughputs for various bits of kit and will convert Component-in to DVI-out.


AverMedia doesn’t get off to the best of starts with the box alarmingly quoting such features as ‘Special for Professional Game Console’, and ‘Worldwide Stereo Sound’. But things look better upon opening it up, as the AVerTV Hybrid STB is securely packaged, and comes with a nice bundle including an eight-pin DIN component and S-video breakout cable, a DVI-VGA adaptor, DVI and 3.5mm audio cables and a remote control. 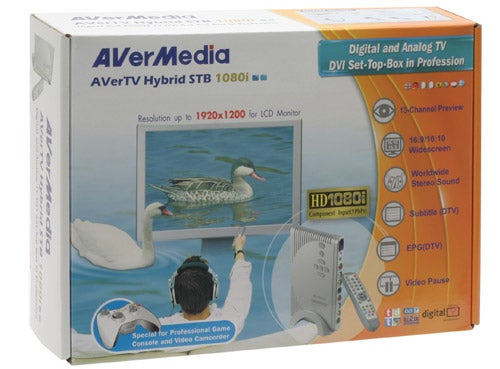 The unit itself is a fairly decent-looking and diminutive affair, roughly the size of an elongated optical drive. It sports a silver finish, with the logo, model and some of the features printed below several grey control buttons. It has a green power LED, IR sensor, headphone jack, composite plus stereo in/out, S-Video connector and the eight-pin DIN on the front, while the back houses the power jack, 3.5mm audio in/out, antenna connection and DVI in/out. On the bottom are four rubber feet for horizontal placement. It comes with a small 5V power brick, just slightly larger than ones for most mobile phones.


Meanwhile, the base – in case you want to place the AVerTV unit upright – is very solid, constructed of thick plastic in the same colour as the buttons – though it would probably have been nicer if it had been silver to match the box. The rubber pads on the bottom don’t extend beyond the base’s lowest edges, meaning it is possible to scratch the desk or shelf that it stands on. But once down it does provide a very solid ‘grip’. 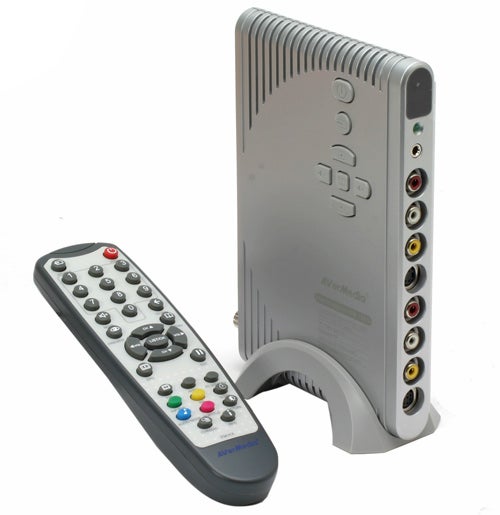 However, the first sign of physical cost-cutting is that the unit doesn’t actually fit properly on the base, because the rubber feet for horizontal orientation are in the way. This rather defeats the purpose of providing a base in the first place, and means that in the upright position, you have to be very careful when hooking up cables not to put too much pressure on the device.


The remote (running on the twin AAA batteries provided) is actually a pleasant surprise, for while it’s no Logitech Harmony 1000, its layout is sensible and quite comfortable. Unfortunately its colour scheme doesn’t match anything about the STB, but that’s not really a major issue. And though none of the buttons are backlit or even glow-in-the-dark, the sensible layout makes it reasonably easy to use the most common functions in the dark.

Naturally it’s all very easy to set up, though you’re left with quite a tangle of cables sprouting from both sides. The remote is usually responsive and has a decent range of at least ten metres. You can control most functions (indirectly) from the box itself, which is a blessing if you ever temporarily mislay the remote.


The AVerTV Hybrid STB works for monitors with DVI or VGA (through the supplied adapter), but cleverly, you don’t have to sacrifice your computer’s digital connection since the unit functions flawlessly as a DVI pass-through, meaning your desktop’s but a button-press away at all times. 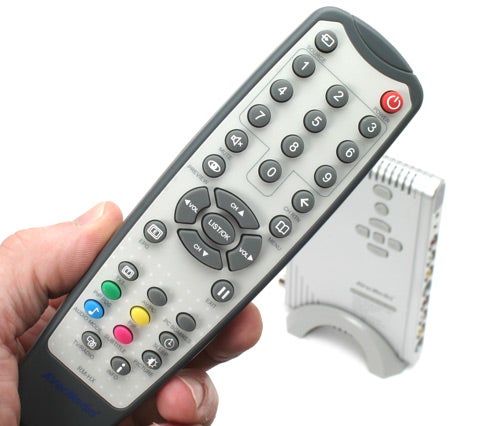 On first setup, you have to go through a minimal configuration process, where you choose regional settings (country, language and time zone), menu colour (I selected grey from a fairly wide range), menu transparency level (in 25 per cent increments) and menu border pattern (rounded or sharp). Another, rather counter-intuitive incident of bad translation into English is that ‘regional setting’ can be found under ‘system settings’, while ‘resolution’ is found under ‘user settings’.


Just on a side note, there’s more bad news in that the AVerTV Hybrid STB froze up during this setup process, and nothing short of disconnecting it from the mains would make it work again. This has only happened one other time since, and could be due to a faulty unit, but it is another blemish on a hardly spotless record.

Once I had everything set up, initially at 1,920 x 1,200, it became obvious that this is one of those rare cases where having a smaller, lower resolution monitor is actually better, unless your monitor is one of those even rarer cases featuring a decent scaler. And since the AverMedia STB is obviously ”not” one of these cases, when running an SD (640 x 480) feed you’ll want your screen as close as possible to the unit’s minimum supported resolution of 1,024 x 768 (1,280 x 768 widescreen).

Not that watching TV at a 24in monitor’s full resolution is unbearable, just that it’s nowhere near as sharp as on your old CRT television. You can try improving things with the brightness, contrast, colour, tint and sharpness settings, but to be honest it’s not going to have much of a (positive) effect.


Still, the STB works pretty much as advertised with analogue TV, finding, naming and arranging channels automatically, and providing an okay experience. However, though switching to digital immediately ups the picture quality, it also introduces artefacts. These range from the occasional bit of pixilation to, on rare occasions, an unwatchable picture, and I’m afraid this is completely down to the STB’s poor digital tuner.

The AVerTV sports a feature called ‘video pause’, but don’t be fooled by the erroneous name – this unit has no memory, you won’t be able to pause and resume live TV, meaning that if you ‘freeze’ a frame, when resuming you’ll have missed part of the broadcast. Still, it’s handy to have in there for many situations, including checking the small text or phone number in an offer/add, or studying weather charts – I just wish AverMedia would use less misleading names for ‘features’ on both its website and packaging.


Furthermore there are the usual ‘parental lock’ and PiP (picture-in-picture) features, and a preview window which lets you see 13 (analogue) TV channels simultaneously (nine for digital). The only niggle here is that the channels take a while before loading. Then we have some DigitalTV-exclusive functions, like a clear and well-presented EPG (Electronic Program Guide). The subtitle mode, however, is another thing that seems to be fatally flawed. First I couldn’t get them to turn on, then I couldn’t get them off. Sometimes, the ‘off’ function actually turned them on. It works, but not smoothly by any stretch. 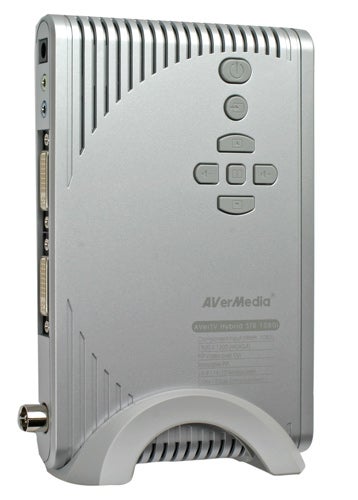 Which brings us to what is probably the single biggest disappointment about the AVerTV Hybrid STB, especially for console enthusiasts. When I first hooked up an Xbox 360 through the component adapter, I thought there must be some badly-configured settings. But no, the cable was set to HD, the monitor (a Dell UltraSharp 2408WFP) on 1:1 pixel mapping, and the Xbox at 1080i. All of which made it rather worrying that I was getting a fully-stretched image (there should have been black bars at the top and bottom since I was running on a 16:10 screen), and images looked like I was using a poor-quality composite cable. Frankly, if you had been hoping to use the AVerTV STB 1080i to connect a Wii or other device to your PC monitor over component, don’t – it really is that bad. 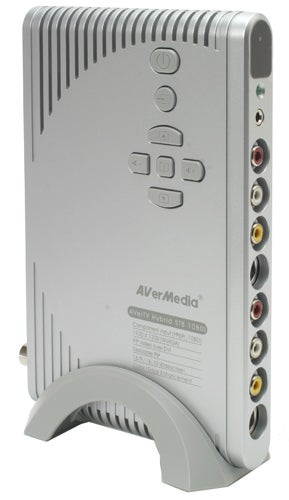 If you want to be able to use component connections on a display that doesn’t feature that input, there are various adapters available, while pairing a TV tuner to your PC will give you many more features than the £130 AVerTV Hybrid STB 1080i, including live pause and record. If you have a laptop, AverMedia’s own AVerTV DVB-T Express is a compelling alternative option.


AverMedia’s seriously flawed AVerTV Hybrid STB 1080i doesn’t do anything well enough to be able to recommend it – except perhaps the ability to watch terrestrial analogue TV on your monitor without needing a PC, but then there are better and far cheaper ways to achieve this.