It’s an age-old problem – you desperately want to watch LK Today and Jeremy Kyle every morning but the inconsiderate schedulers at ITV1 only show them when you’re on the train to work. Well despair no longer, because you can now get your fix of makeovers and jewellery-clad chavs on the move thanks to the DTV350C, a portable multimedia player with a built-in Freeview tuner.


Made by UK-based company August, the DTV350C is a light, compact unit measuring just 105 x 75 x 18mm (w x h x d), which makes it one of the world’s smallest integrated digital TVs. On the front it sports a 3.5in LCD screen with a resolution of 320 x 240 pixels, but with a 4:3 aspect ratio it’s not ideally suited to Freeview broadcasts, many of which are widescreen. Fans of facts and figures note that the screen’s brightness and contrast ratio are quoted as 250 cd/m² and 300:1 respectively. 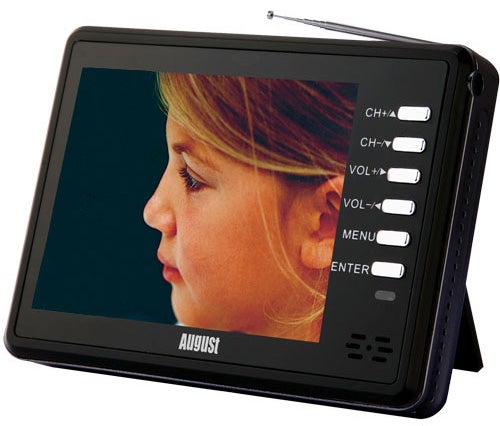 The main body of the DTV350C feels fairly well-built and the black finish is fetching, but it does bear some cheap ‘n’ cheerful hallmarks, such as the flimsy pull-out stand on the back and the stiff, clunky buttons on the front.


Set into the sides of the unit is a small selection of sockets. On the left is a mini USB port, which houses the AC power adaptor for charging the battery or running off the mains, or the supplied USB cable when playing back media from a memory device. It’s joined by a headphone socket that doubles up as an AV output, should you want to pipe composite video and stereo audio to your TV. On the bottom side is a flap that hides an SD/MMC card slot, which accepts cards with capacities up to 8GB, on the right is an input for the supplied portable antenna and along the top, the unit sports a telescopic radio antenna and the power switch. 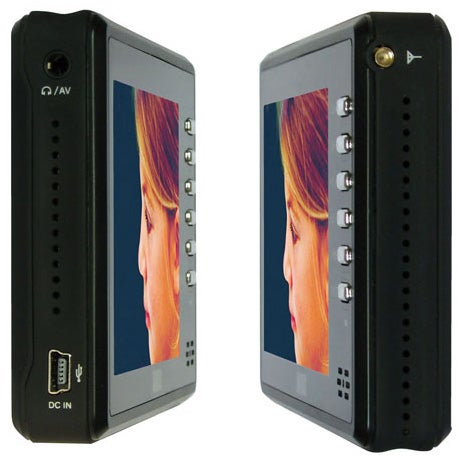 Alongside the USB cable, power adapter and portable antenna in the box is a pair of earphones and an aerial adapter, which allows you to plug in your rooftop aerial when watching indoors.


It’s worth pointing out that unlike media players from the likes of Archos, there’s no hard-disk on board, so any media you want to play must be fed in from an SD/MMC card or USB device. But after loading up a USB stick crammed with a variety of media files, it’s disappointing to discover that the unit supports a fairly limited range of formats. It won’t play DivX, WMV or WMA, which is a blow considering how common these formats are, and although it lists AVI support on the spec sheet it played back our files with sound but no pictures. It does, however, support MPEG-1/2/4, MP3, WAV and JPEG.

Inside the unit is a rechargeable battery, which when fully charged offers three hours of TV or video playback, or 10 hours of audio playback – a very respectable amount of time by portable player standards. For audio playback there’s a small built-in speaker, but we predict you’ll be better off using headphones.


After turning the unit on, you’re greeted by a charming splashscreen showing the word August over a green field and bright blue sky, followed by an initial install screen where you can punch in your country and preferred language. 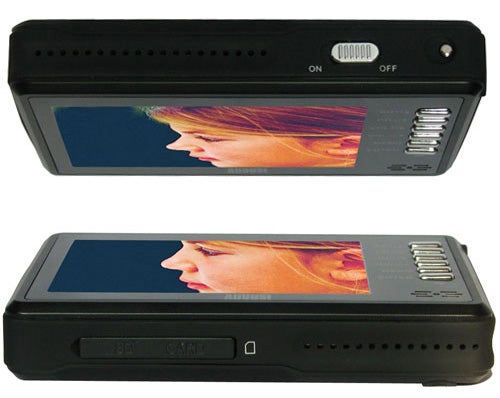 Hit Menu and a blue box appears, listing the different types of content available (digital TV, movie, music, photo etc) next to a box showing the current TV channel. The various folders and setup menus are all clearly presented, which makes it very easy to find the content you’re looking for and to change the settings. You can change the picture’s aspect ratio to fill the 4:3 screen and tweak the screen’s brightness, contrast, hue and saturation levels. You can even change the colour of the onscreen menus.


Everything is controlled using those silver buttons on the front, with the channel and volume buttons doubling up as the up/down/left/right keys and there’s an Enter key at the bottom. You have to press these really hard for your commands to register and their arrangement feels a bit cumbersome, but after prolonged use you get used to it. 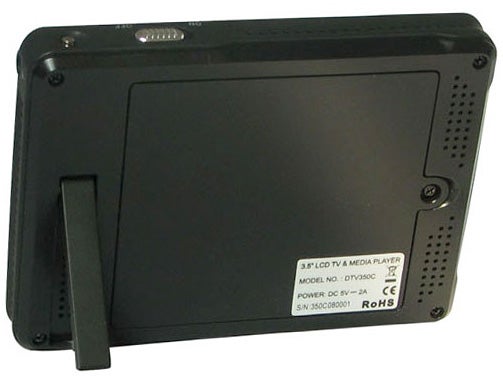 Inside the unit is a range of EQ modes for audio playback (Classic, Rock, Jazz, Pop) and some surround effects that mimic concerts, churches and other strange environments. You’ll also find a couple of games embedded in the unit including Box Man and Tetris, the latter proving really tricky with those unresponsive buttons but provides a welcome bit of nostalgia.


As for digital TV, the unit offers most of the stuff you’d find on a regular Freeview receiver. There’s an EPG which doesn’t stretch to 7 days but shows you the current day’s worth of programmes. It’s surprisingly easy to follow, listing the channels down the left and the programmes down the right, with live TV playing in the background. Elsewhere there’s teletext and multi-audio support and a little now/next banner appears when you change channel. August also says that you can watch TV while travelling at up to 180km/h and still get a good signal.

We nipped out into the garden (in the middle of rural Devon) and tried tuning the Freeview channels using the portable aerial but were unable to find any channels whatsoever. To be fair, the entire accompanying bumph makes it clear that you need a very strong Freeview signal to have any success, but it was disappointing as the coverage is usually very good. 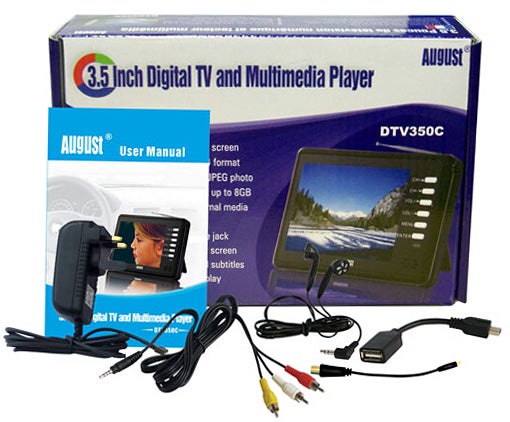 So we trudged back into the house and plugged in the rooftop aerial, and instantly found every channel available. Sadly, the tuner doesn’t store them in order and you have to flick through every channel in order to get to the one you want, which is extremely tedious. But the unit’s picture quality is surprisingly good, packed with bright, vivid colours and enough detail to make fine text legible. Block noise is less of an issue than we expected too, making for a very enjoyable watch – although the size of the screen might strain your eyes after watching for a long time.


Playback of video files is very enjoyable, but of course it depends on how well the file is encoded. As for sound quality, the built-in speaker is extremely weedy, but if you’re in a quiet environment it’s just about bearable for speech-based TV programmes.


With its lack of support for Windows Media and DivX, the DTV350C doesn’t cut the mustard as a multimedia player, and its build quality is poor in places. However, the Freeview tuner is a useful feature, providing surprisingly watchable pictures on such a small screen, but elements of the digital TV operating system (particularly the jumbled channel order and the limited EPG) leave a lot to be desired, and for Freeview reception you’re at the mercy of the local signal strength. In its favour, there’s nothing else like it on the market, and if you’re willing to overlook its foibles then the reasonable price tag could make it a cost-effective travel companion if you’re on a tight budget.