Perhaps the most enjoyable part of reviewing technology is finding a product which confounds your expectations. The Audyssey ‘Lower East Side Audio Dock Air’ is the crazily named follow up to the equally bonkers South of Market Audio Dock. It has reduced functionality and downgraded speakers yet costs just as much because Audyssey has added AirPlay. Our style over substance argument was readied… but we were wrong.

”’Design”’
Out the box the Dock Air looks nothing like its bigger brother. Audyssey has ditched its gentle curves for a more rectangular design and significantly cut down the dimensions. At just 22.6 x 21.1 x 12 cm and weighing 2.3Kg is it the most compact AirPlay dock we have seen. The design may be minimal, but it is also attractive. Unlike show-offs such as the Bowers & Wilkins Zeppelin Air which aim to catch your attention, the strength of the Dock Air is its subtlety to blend into a room. You won’t notice it until it is switched on and with its small size it will fit just about anywhere. 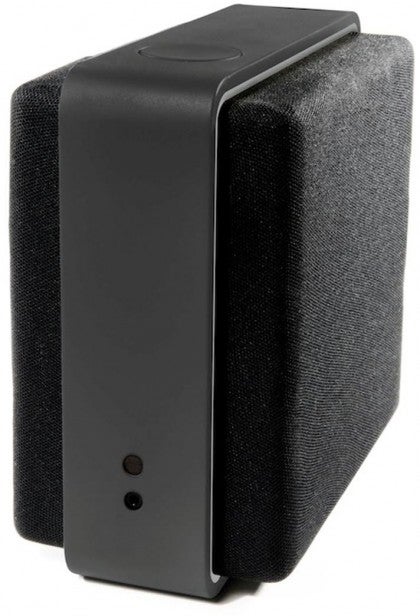 Happily where the Dock Air does tie closely with its older sibling is build quality. The materials have changed – Audyssey has opted for fabric speaker grills not metal and a matt plastic band which stretches around the whole unit – but it is painstakingly put together. The band in particular has an aluminium core which makes it feel extremely robust. One area we do take issue with is the volume dial on the top which is a little fragile, though it does cleverly double up as a mute button when pressed.

”’Features”’
Aside from the wheel, interaction with the Dock Air is minimal. Two small green LED status lights behind it indicate AirPlay status and respond to input from any connected device (there is no remote control), a headphone input is positioned at the front and at the rear is power, a 3.5mm auxiliary jack and a pairing button to initiate the AirPlay connection. As for AirPlay itself it has earned a reputation for excellent audio quality (it transmits lossless with ease), but a less than intuitive setup. 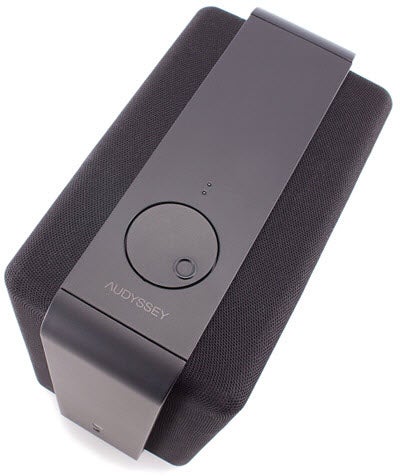 For a debut AirPlay device, Audyssey has overcome this latter problem well. Pairing starts the Dock Air’s own WiFi connection and connect any AirPlay compatible device to this network, go to the device’s web browser, type in the dock’s web address and from the settings page that loads point it at your own WiFi network and supply the password. The settings page also allows you to change the name of the Dock, but all in all you will be up and running in less than five minutes.

Which brings us to the primary source of our confounded expectations: sound quality. The South of Market dock is a 200W beast with two .75in tweeters, two 4in woofers and four discrete amplifiers. The Dock Air uses the same tweeters, but scales back to two 3in woofers and replaces the amplifiers with two 4in passive bass radiators. In its favour the Dock Air angles its speakers at 45 degrees to widen stereo separation like the South of Market and it also crams in the company’s proprietary BassXT technology which helps to produce more accurate lows. David doesn’t slay Goliath, but he gives it a darn good go…

”’Impressive Performance”’
The primary strength of the Dock Air is the sheer size of its sound. For such a small dock it produces genuinely ‘big’ sound (no doubt Audyssey’s experience with IMAX Cinemas is a factor) and projects audio far and wide to create an hugely impressive room filling experience. Audyssey has gone for a noticeably warm sound signature on the Dock Air too and it delivers bags of bass and plenty of midrange depth which will appeal to the mass market. On dance and hip hop tracks this creates some window shaking moments and in our testing caused a nearby pen to roll off the desk!

Against this is reduced response in higher frequencies, surprising given it shares the same tweeters as the South of Market, but there remains plenty of detail. Despite its warmth the Dock Air is also no big beats homer and is equally comfortable with acoustic, classical and jazz though it sounds particularly happy with blues. Overall it is hair raising stuff. 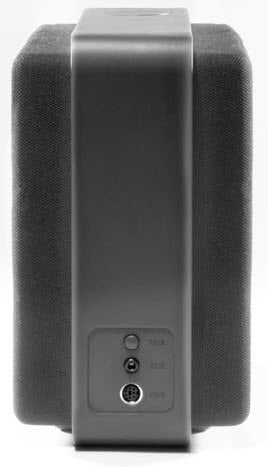 ”’AirPlay Issues”’
That said we do have some grumbles and these stem from AirPlay. Implementations of AirPlay up to now have been hit and miss in the docks we’ve tested from the exceptionally smooth Libratone Live to stuttering and delays of up to 25 seconds to begin playback in the case of the Klipsch Gallery G-17 Air. The Dock Air’s AirPlay sits somewhere in the middle of these extremes with a circa five second delay from hitting play on any AirPlay enabled device to it coming out of the speaker. This delay is always present and can be frustrating when scanning though or skipping tracks.

In addition there were times when stream broke down. Admittedly these were few and far between, but once the Dock Air began to stutter we found it continued to do so and the quickest remedy was to hit pause the play. Audyssey has equipped the Dock Air with a USB firmware port on the bottom and we hope future updates can smooth this out. 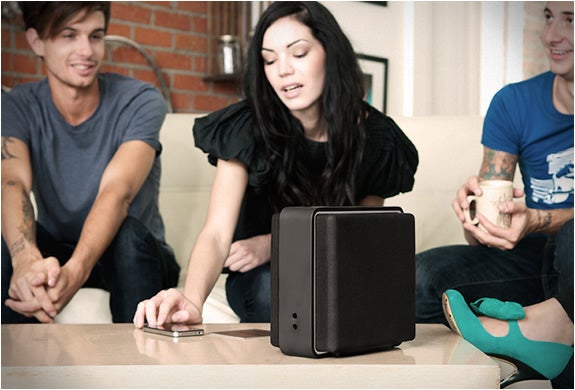 ”’Value”’
All of which brings us to price. Officially the Dock Air has the same £299 RRP as the South of Market and the latter holds a sonic edge while packing in Bluetooth and VoIP compatibility and doubling up as a PC speaker. In this regard South of Market is the better buy, but for those with their heart set on AirPlay (a significant premium in general) the Dock Air is one of the best priced models around. It easily bests the audio performance of the similarly priced Logitech UE Air, does the same to the £429 Klipsch Gallery G-17 Air and stands up to the £500 B&W Zeppelin Air which is starting to show its age against newer generations. In this context the Dock Air is a bargain, an eyebrow raising, power-packed mighty mouse of a bargain.

”’Verdict”’
Don’t be fooled by its diminutive size, the oddly named Audyssey Lower East Side Audio Dock Air packs a huge punch. Rich, warm sound with a thumping bass is the Dock Air’s trademark and it will surprise and delight in equal measure. It isn’t flawless with some AirPlay streaming glitches that will hopefully be ironed out with firmware updates and AirPlay itself adds a significant premium, but against its AirPlay-equipped contemporaries it is currently the best buy of the lot.