The 6000N Play is a great way of turning an existing stereo set-up into one with streaming at its centre. With a good feature, Hi-Res audio support and a sound that offers plenty of detail, clarity and precision, it's enough to give Bluesound's Node 2i a run for its money

Music streaming is all well and good – it’s brilliant, in fact – but it’s not the be-all and end-all. What if you aren’t interested in the compromises inherent in all-in-one-box wireless speakers? What if you listen to sources other than music streaming services? What if you have a stereo system you’re perfectly happy with, except that it’s unable to manage the whole music streaming thing?

Celebrated British hi-fi specialist Audiolab understands completely. Which is why, unlike a lot of ostensibly similar companies, it hasn’t been tempted to shoehorn all its music streaming gubbins into one of its integrated amplifiers and claim ‘job done’. Instead, it’s expanded its 6000 series (which consists of the 6000A integrated amp and 6000CDT CD transport) to include this, the 6000N Play network streamer.

Separating different functions into as many different boxes as possible in the name of optimum performance is as old-school an idea as the phrase ‘stereo hi-fi system’ itself. But it makes a lot of sense – existing 6000 series owners have an aesthetic and performance match for their existing products, but owners of any other brand’s kit can integrate the 6000N Play into their systems, too.

Yes, it’s about as big a faff as it sounds. But the results are bound to be worth the aggro. Aren’t they?

One person’s ‘minimal and sophisticated’ is another’s ‘dull and boring’ – but even so, the 6000N Play is so anonymous it’s almost avant-garde.

At 6.6 x 44 x 31cm (HWD) the Audiolab is of classic ‘hi-fi separates’ dimensions. The front fascia has an indicator light at the bottom left of the panel, a ‘standby’ switch on the right (the main ‘power on/off switch is at the rear), and six small pre-set buttons – that’s everything. No display, nothing. Just a lot of smoothly finished metal, yours in black or silver.

Everything is put together really well, there are no iffy joints or pointy corners… but if there was anything in the Audiolab budget earmarked for ‘design’, I think it’s safe to say the company didn’t spend much of it.

The rear panel of the 6000N Play is where the action is – here’s where you find the mains power output, the ‘power on/off’ switch mentioned above, and a pair of aerials for the dual-band wi-fi.

There’s also an Ethernet socket (because network stability is not to be taken lightly), a button to enter ‘Wi-Fi set-up mode’ (because there’s no display, remember?), a digital optical output and a coaxial equivalent.

Rounding things off there’s a stereo RCA analogue output and a couple of USB sockets. One USB is for firmware updates, the other for connection to a 6000A amplifier. 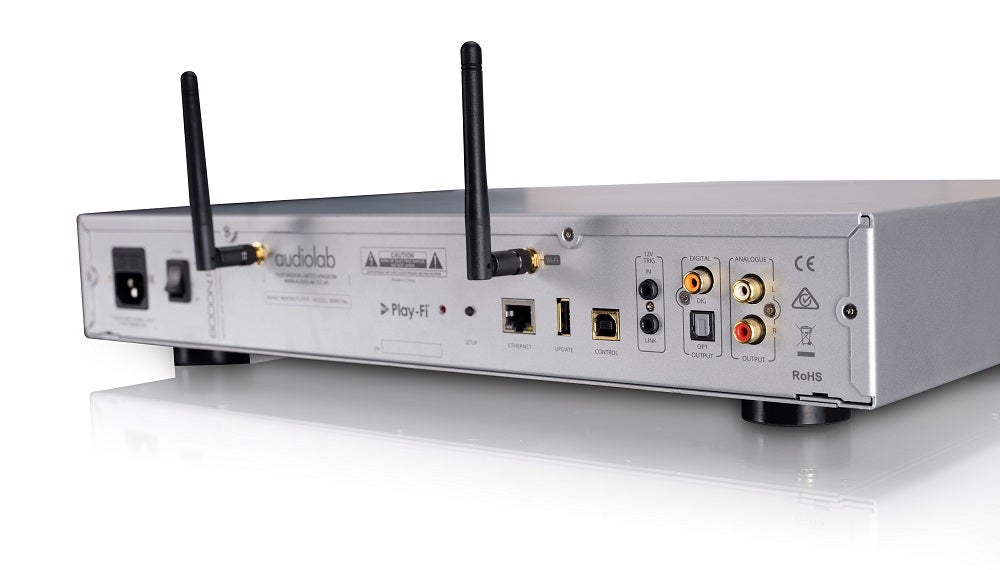 On the inside, Audiolab has kept faith with the ESS ES9018 Sabre32 digital-to-analogue converter found in its 6000A amp and also the standalone M-DAC converter. It’s a 24bit/192kHz device, which means high-resolution audio is firmly on the menu – after all, you may well have some Hi-Res digital files stored on your local network, or you might be a TIDAL or Qobuz subscriber and get your hi-res jollies that way.

In any event, access to music and control of the 6000N Play is via the DTS Play-Fi multi-room app. It makes sense for a company the size of Audiolab to integrate the Play-Fi platform into the 6000N Play in order to go with a tried and tested third-party app rather than going to the (appalling) trouble and (hideous) expense of developing its own. 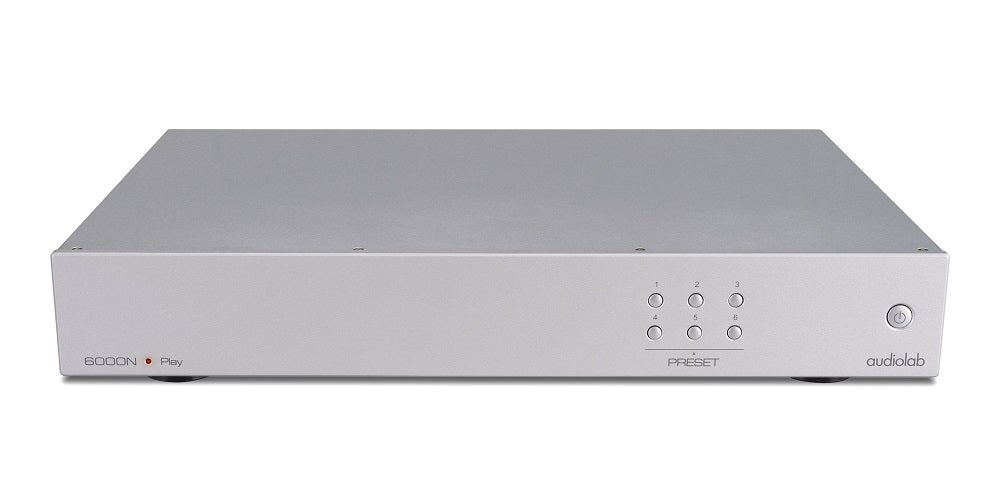 So via the Play-Fi app it’s possible to access streaming services like Amazon, Deezer, Napster and Spotify as well as those already mentioned. iHeartRadio and Radio.com (among others) provide access to internet radio, there’s DLNA and UPnP compliance for your networked audio. And it’s simplicity itself to set up a multi-room system using other Play-Fi-toting equipment, up to a maximum of 32, which ought to be plenty.

The app proves stable and generally logical, if occasionally slightly sluggish. Because Play-Fi can operate so many multi-room zones, by default it downscales audio down to a CD-quality 16bit/44.1kHz standard in the interest of preserving bandwidth.

Naturally, that’s not how a 6000N Play owner is going to want to roll, so in the app it’s possible to tap the Hi-Res audio logo and activate the Audiolab’s ‘Critical Listening Mode’. This dispenses with all the downscaling nonsense and restores the Audiolab to its 24bit/192kHz streaming resolution.

At the very least, the 6000N Play is a remarkably consistent-sounding device. During the course of this test it delivered music from FIP via iHeartRadio (at a miserable 128kbps), from Spotify Connect (a slightly more acceptable 320kbps), and from both TIDAL and network-attached storage (in the much more acceptable 16bit/44.1kHz to 24bit/192kHz range) – and it maintained a consistent balance throughout. 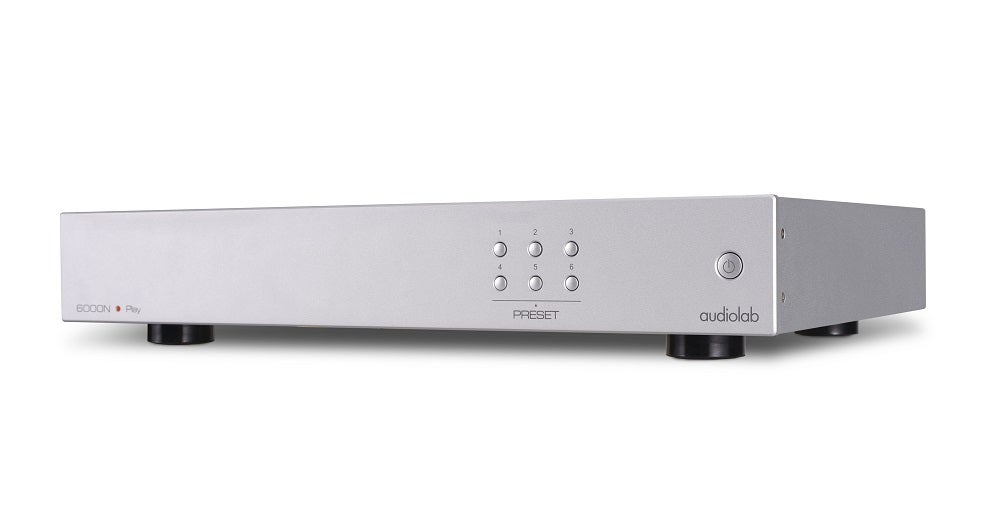 Given the best possible opportunity, with a 24bit/192kHz file of James Taylor’s smoother-than-smooth Sweet Baby James, the Audiolab has clarity, detail and precision to spare.

In an unsympathetic system it could initially sound slightly cold and dispassionate, but in truth it’s undemonstrative in the best sort of way – its tonal balance is staunchly neutral, and it gives each area of the frequency range similar emphasis. This even-handedness, allied to the sort of midrange insight that renders Taylor’s delivery almost toe-curling in its sincerity, makes for an intimate and articulate presentation.

Even when out of its comfort zone (and a 16bit/44.1kHz file of The Residents’ The Knife Fight isn’t in anyone’s comfort zone), the 6000N Play sounds pacy, but unforced, and keeps a close eye on the minutiae even as it describes a well-integrated whole. It’s competent with smaller, second-order harmonic dynamics and more than capable when dealing with coarser dynamic shifts. As a consequence it manages to be involving and engaging without sacrificing its powers of analysis. 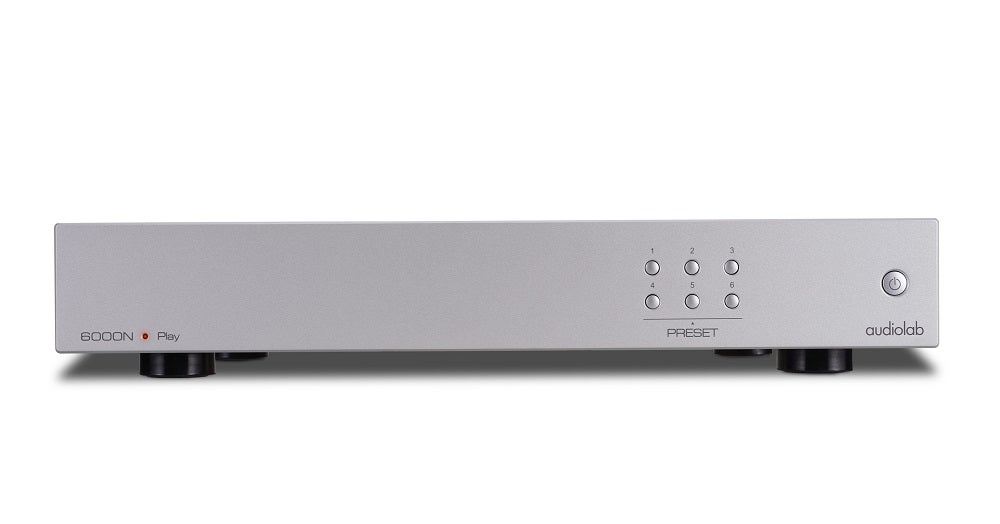 Some listeners will want a bit more warmth from their digital audio, but frankly this Audiolab isn’t in the business of handing out audio cuddles, and it more than makes up for its relative lack of heat with the pace and accuracy of its delivery.

If you value rigour more than relaxation, the 6000N Play could be the perfect way to bring your existing system into the brave new-ish world of music streaming.

For those stuck in the doldrums of a traditional hi-fi system, then plugging in the 6000N Play will serve to bring your system into modern times, adding wireless connectivity and steaming for a more flexible listening experience.

Bluesound’s splendid Node 2i is, like the Audiolab, a dedicated stand-alone music streamer. It’s usefully compact where the 6000N Play is, relatively speaking, on the biggish side, and it’s even more lavishly specified than the Audiolab. A 32bit/192kHz DAC, and aptX HD Bluetooth and AirPlay 2 connectivity, are not to be sneezed at.