The Audio Technica SonicFuel ATH-OX7AMP are very unusual headphones. They are battery-powered, but unlike other powered headphones do not have Bluetooth or active noise cancellation.

The power source is there to fuel the inbuilt amplifier. These headphones are all about sound, not any other technical wizardry. At £200 they’re not cheap, but they can compete well with other portable headphones under £300 in just about every respect. 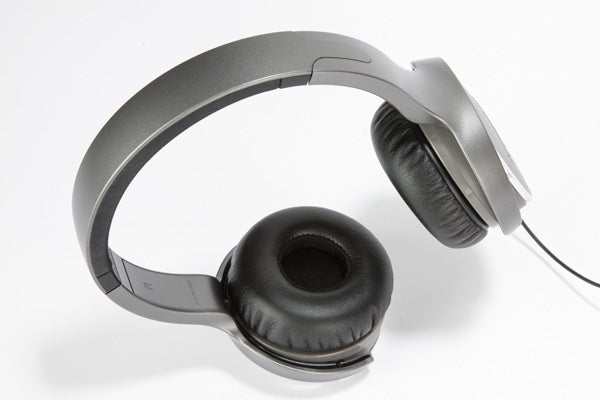 The Audio Technica ATH-OX7AMP are portable headphones, roughly in the same vein as something like the Beats by Dr. Dre Solo HD. They are on-ear headphones – their pads sit directly on your ears rather than around them.

Their grip is mid-firm, so if you don’t like headphones with a bit of clamping force, be sure to check these out first-hand before buying. Otherwise the comfort is good, though. The cups are generously padded with high-quality synthetic leather and they’re light given there’s an amp and battery inside.  And while the headband uses grippy rubber padding rather than lined foam, it doesn’t cause a comfort issue. 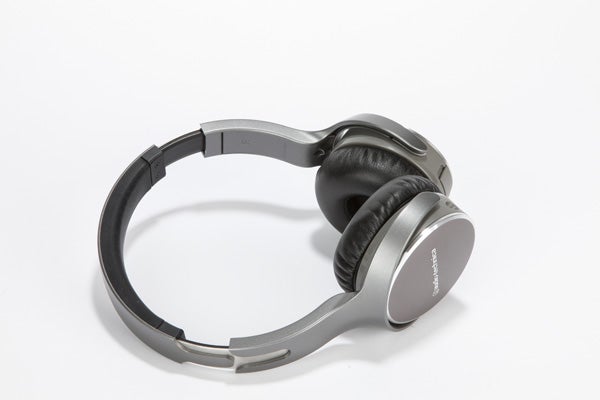 A rubbery headband and fairly forceful tension are all marks of a good pair of portable headphones too. You could jog with the Audio Technica ATH-OX7AMP on without having to worry about the things falling off.

Looks-wise they’re a bit of a mixed bag. The low-key mostly-grey design and sophisticated curves are all welcome, and while they stick out from your head a bit more than some on-ear sets, the core design is a good one. It’s when you get a bit closer that the Audio Technica ATH-OX7AMP don’t quite shine. The controls and battery cover on the undersides of each earcup look a bit toy-like and cheap – there’s a switch and volume control for the internal amplifier, and they’re not nearly as classily-executed as we’d expect from a higher-profile manufacturer like Sennheiser or even Beats. 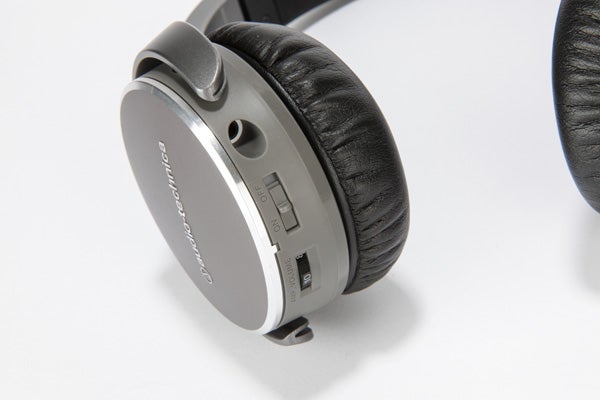 The Audio Technica ATH-OX7AMP are largely plastic headphones, but there are some metal elements. The back of each cup is topped with a plate of metal to give a high-quality feel and the core of the headband is steel. They’re decent-looking, well-made headphones. They just don’t have the conspicuous high-grade construction as the headphones of some other, generally pricier, brands.

They use a removable cable, and you get two of the things in the box. They’re pretty skimpy, as is usual for a portable pair. Trying to suit most people, one is a plain cable, the other has a handsfree remote with single button (for maximum compatibility with phones inc. Androids, iPhones and others). 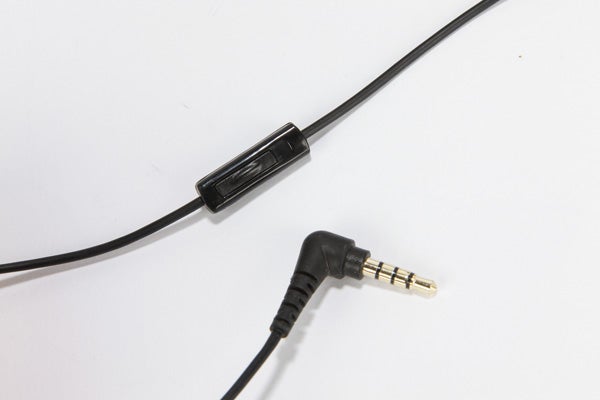 This is the first pair of headphones we’ve reviewed to have an amp but no wireless audio or noise cancellation – the normal reasons to bung a battery in a pair of headphones. It’s easy to apply a vague ‘it’ll improve sound quality’ excuse to this decision, but let’s look at the two real reasons why using an amp makes sense.

First, it helps Auto Technica to separate itself from rivals in what is fast becoming a massively oversaturated market. When the headphone sector was targeted as one of the fastest growing areas of consumer technology, everyone started jumping on the bandwagon. Audio Technica has been making sets for decades, but we’re not sure if we’d see these particular headphones introduced if portable headphones hadn’t become ‘hot’ all of a sudden. 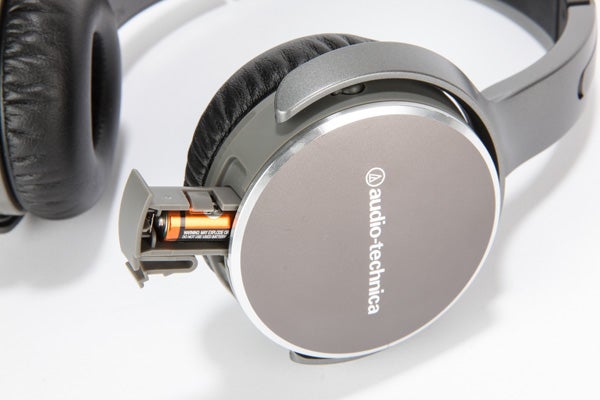 Higher impedance drivers aren’t necessarily better than low impedance ones, but are better at handling different – and higher – voltage signals. So higher-impedance speakers are less likely to blow when put under pressure.

Looking at Audio Technica’s line-up, it doesn’t seem like there’s an obvious 40mm 68 Ohm driver it would be dying to fit in a portable headphone, so we can only assume the unit has been designed (or at least customised) specifically for this model. 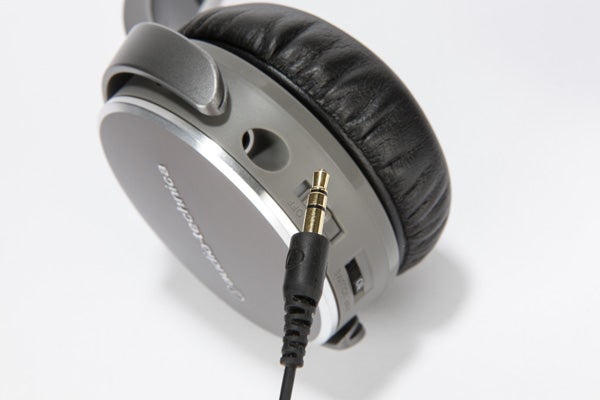 You don’t need to have the amp engaged to listen to the ATH-OX7AMP but the sound quality is better with it switched on. It needs an AAA battery to power the amp, and you’ll get up to 35 hours out of it. We listened for a week before the included unit drained down. But, as with some noise cancelling headphones, it’s very easy to leave the amp switch on accidentally.

There’s no auto-off function so the battery will drain down constantly while the switch is in place. The battery is an ordinary cell, not an inbuilt rechargeable one, so you’ll need to provision for it running out. It is perhaps the best reason not to buy these headphones. 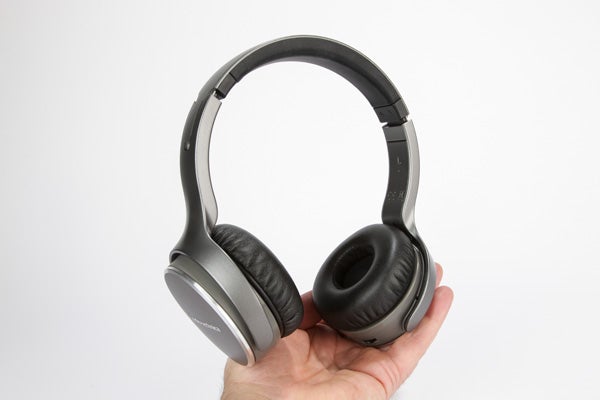 We’re happy to report that Audio Technica’s decision to leave out Bluetooth and noise cancelling has had a positive effect on sound quality. The extra expense of one and the sonic effects of the other generally always make those headphones’ audio quality seem compromised relative to their price. There’s no such effect here.

In common with those headphones, the signature is a classed-up version of the style headphone norm. There’s a bass emphasis, but not one that significantly bloats into the mids, or threatens to step on the treble. 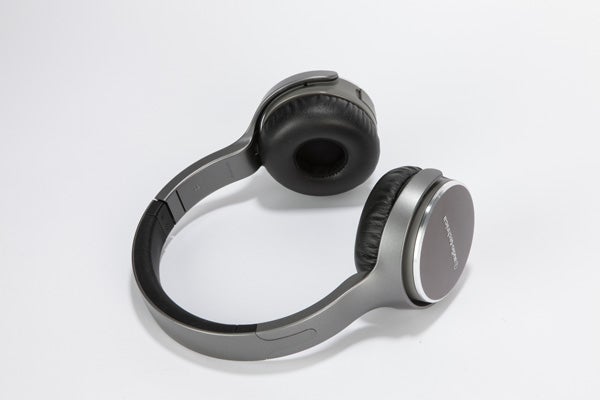 Bass response in something that the amp section helps out with, too. Bass depth, authority and power are great for a portable pair. We’ve seen amp power really helping out in this field before recently too – in the more expensive Ultimate Ears UE 9000. If you want audio justification for the amp section, this is the most convincing argument for it.

This is perhaps the area where the headphones stray from the traditional Audio Technica norm the most, though. While the bass is not terribly bloated, the sound is a more bass-led than the company’s hi-fi-headphones.

The power is matched with great treble detail, but if delicacy is your bag, they
probably aren’t the headphones to go for. The powerful low-end does pull
focus slightly too much to nail orchestral works – it’s not the bass
being truly overpowered, but rather that the width of the soundstage
(which is naturally going to be less than a top open-back pair) makes
perfect and ‘easy’ imaging a challenge. Sonically, we find the sheer
bass power the biggest issue, and the OX7AMP could have done with being
tamed by about five per cent. But we do not doubt that some will love
the sheer low-end grunt.

Other areas of the sound are strong too. The treble is sparky but not sharp. Detail levels are well above average, and a decent mid-range stops the sound from seeming too ‘scooped’ – where the mid-range is neglected in favour of the more attention-grabbing treble and bass. However, we did find that you do need to be a little careful about your source with these headphones, as the low-end can overly dominate with some. 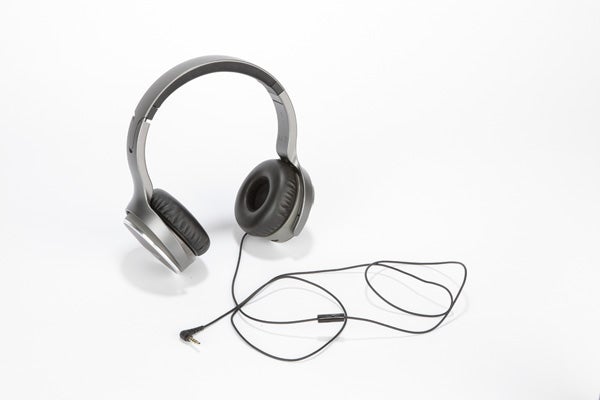 The real success of these headphones, though, is how vivacious and powerful they manage to sound. While we wouldn’t ascribe this to the amp as such, the Audio Technica SonicFuel ATH-OX7AMP are exciting headphones with an energised sound. The scope of the soundstage is also good for an on-ear pair

With the amp switched off, volume takes a hit, as does the vivacity of the sound. Some of the treble bite exits stage left (this is the part we miss the most). However, sound quality remains good – good enough should you, for example, forget to take a spare battery on holiday. 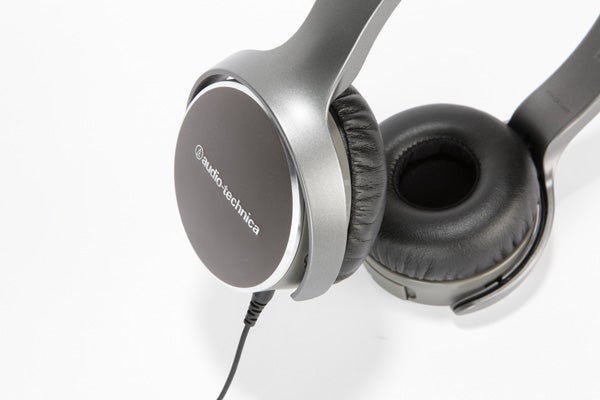 The Audio Technica SonicFuel ATH-OX7AMP seemed at risk of becoming a gimmick. An amp is no guarantee of good sound quality when portable sound quality is determined by other factors as well – such as the DAC, which these headphones don’t get involved with.

However, the use of matched drivers does result in seriously impressive sound that is among the best in its class. It’s exciting and powerful, without suffering from the ill-defined bass we often hear in modern, higher-end portable headphones.

If you don’t mind the slight stick-out cups and having to keep spare batteries with you, they make a good (and cheaper) alternative to the Sennheiser Momentum and Beats Studio. There are two main drawbacks: some may not like the mid-strong clamping force of the headband and having to keep on replacing or recharging the battery inside fairly regularly will get old if you’re anything like us.

Exciting, engaging sound and a price that while not exactly cheap is still a good £60-70 lower than some of the competition make these amp-packing headphones a solid buy.

Next, read our round-up of the best headphones