The AT-LP60 XBT offers a fair bit of vinyl’s charms without breaking the bank, or having to rewire your entire system

It’s getting on for three years since Trusted Reviews cast its steely gaze on Audio-Technica’s AT-LP60BT Bluetooth turntable. At the time, our conclusions were that, “it’s pretty good fun”, “Bluetooth streaming works well”, “it looks a bit naff”.

Although streaming turntables are relatively popular, most of the activity in the market has either been at the “dirt cheap” end or a notch or two above the Audio-Technica’s price – which has left the field relatively clear for the AT-LP60BT. Despite this, the company has forged ahead, delivering the AT-LP60XBT.

It’s designed to improve on its well-regarded predecessor without leaving its comfort zone in terms of price. But is it possible to advance the quality of performance without adding to the price?

No-one is likely to be blown away by the look or feel of the AT-LP60XBT. 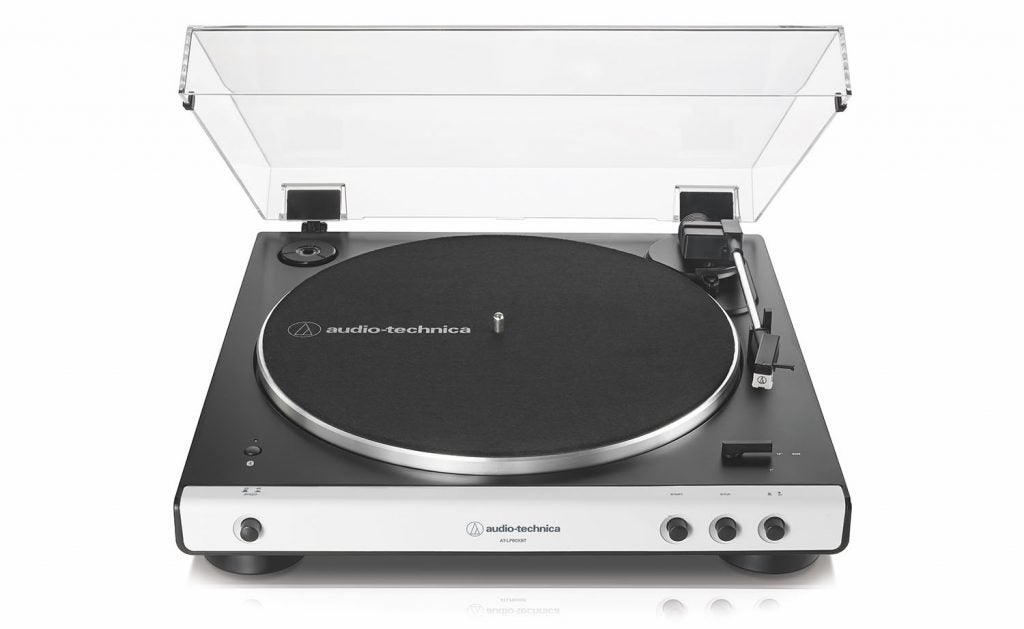 No matter if you choose the black finish, the red-with-black alternative or the white-with-black option, the AT-LP60XBT looks like a record player built down to a price. The plastic that covers the body of the turntable and the dust-cover feels thin and flexible, and the entire unit weighs in at just 2.6kg – which includes its aluminium platter. The general impression of flimsiness extends to the tonearm, too.

None of this should come as a surprise in a sub-£200 turntable that’s brimming with features, but no doubt some prospective customers will find it a turn-off.

Mind you, I’d expect some prospective customers will be encouraged by how compact the Audio-Technica is – its tidy dimensions make it a lot less obtrusive than some more sturdy designs. And the mild updating of its appearance over the outgoing AT-LP60BT makes it look marginally more upmarket, too.

This is where the LP60-XBT really starts to make a case for itself. It has everything you’d expect from an affordable turntable, alongside some features it would have been unreasonable to expect not so long ago.

Let’s start with the fundamentals. The AT-LP60XBT has a belt-drive design, and the belt turns an aluminium platter. It’s a fully automatic turntable, operating at 33.3 or 45rpm, and has “start” and “stop” buttons – which should mean very little interaction with the tonearm.

The tonearm itself is fitted with a moving magnet cartridge, the stylus of which is replaceable. Given the AT-LP60XBT arrived with its tracking force set to a hefty 3.5g, that may be happening a little more often than you might think is reasonable. Unless, of course, you take a moment to back it off a little. 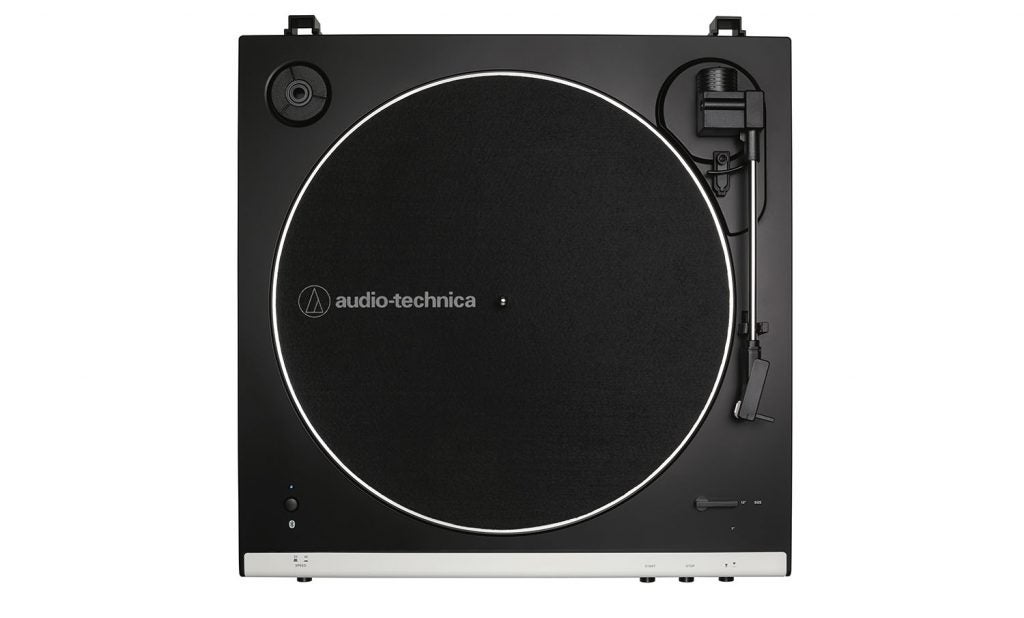 At the rear of the plinth you’ll find mains power and stereo RCA outputs for connection to an amplifier. Also around the back is the first of the Audio-Technica’s more esoteric features.

The AT-LP60XBT is fitted with a switchable phono stage, which pre-amplifies the feeble signal output from a turntable up to a level where it can be dealt with by any line-level input on an amplifier. If your amplifier is well specified enough to include a phono input, though, the XBT’s phono stage can be turned off.

However, the Audio-Technica’s real party-piece, though, is its ability to connect wirelessly to your system, smart speaker or similar. And the most significant upgrade here over the old AT-LP60BT is the appearance of aptX Bluetooth standard wireless streaming – hence the “X” in the model name. Being able to stream at this kind of standard is an obvious plus-point – as long as the Audio-Technica is doing its analogue-to-digital conversion effectively, of course.

This is an impressively high-tech feature, and one I can’t help thinking deserves a little more fanfare than a small blue light on the top of the plinth to indicate the turntable is paired.

Pairing is swift and, once established, proved sturdy well up to the 10-metre range that Audio-Technica suggests is its maximum. Throughout the testing of its wireless performance, the XBT didn’t once even hint at letting the connection fail.

Still slightly mistrustful of the Audio-Technica’s tracking weight, I selected an LP I wouldn’t miss too much if it had become snow-ploughed: Four Tet’s Everything Ecstatic. I pressed start, watched the AT-LP60XBT lift, move and drop its tonearm as a music-centre from back in the day; lower the dust-cover – and we were away. 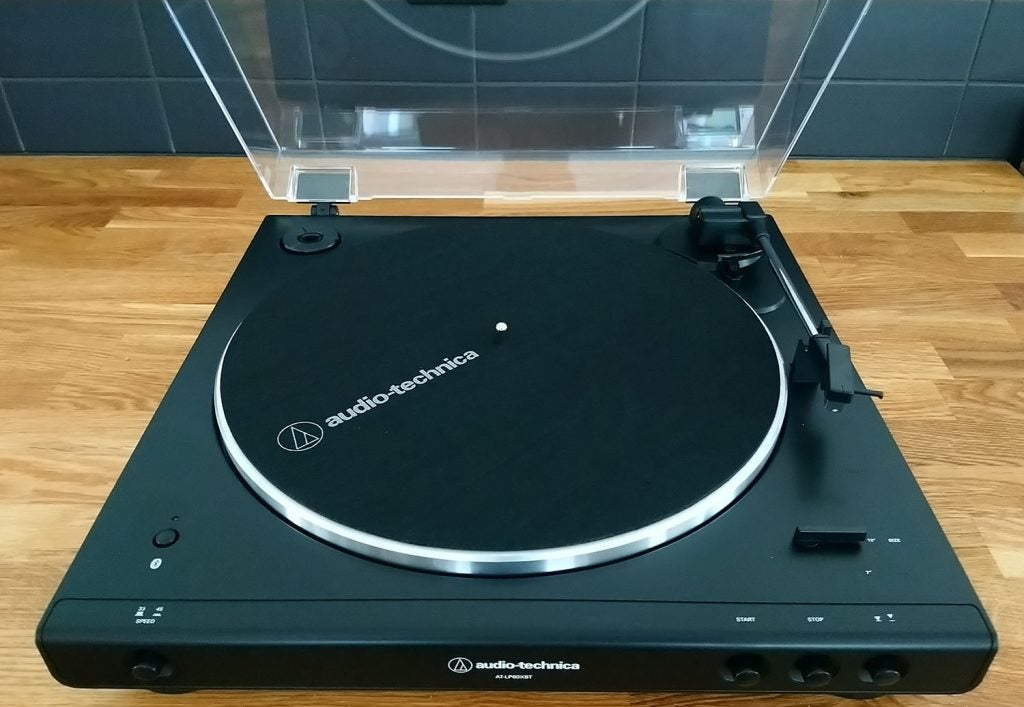 Audio-Technica has, understandably and wisely, erred on the side of caution with the XBT’s sound. There’s reasonable separation to the audio image, and an even-handed approach to the frequency range – the mid-range is pushed just slightly forward but it isn’t obvious enough to skew the overall sound.

There’s a good sense of that naturalistic way with timing, rhythm and tempo that vinyl is so acclaimed for, especially once I switched to the more human sounds of Al Green’s Full of Fire. There wasn’t quite the low-end punch the song demands, but bass presence was well judged and, unlike with quite a few budget-conscious record players, it didn’t sound at odds with the information above it. The mid-range-forward emphasis worked nicely here, too –who doesn’t want Al Green to be at the front of the stage?

There was a mild, but definite, rolling off of the top end – treble sounds were reasonably crisp but not the extent that a recording such as The White Stripes’ I Think I Smell a Rat demands. But, again, this is probably a sensible move; aptX Bluetooth is all well and good, but I reckon a good number of AT-LP60XBT buyers will pair their new turntable with a fairly affordable smart speaker – not all of which are completely refined at the top of the frequency range.

Wiring theAT-LP60XBT to a stereo amplifier seems extraordinarily retrograde, but there’s no doubt the deck sounds better this way, mainly because there’s none of this complex analogue-to-digital-and-back-again processing going on. 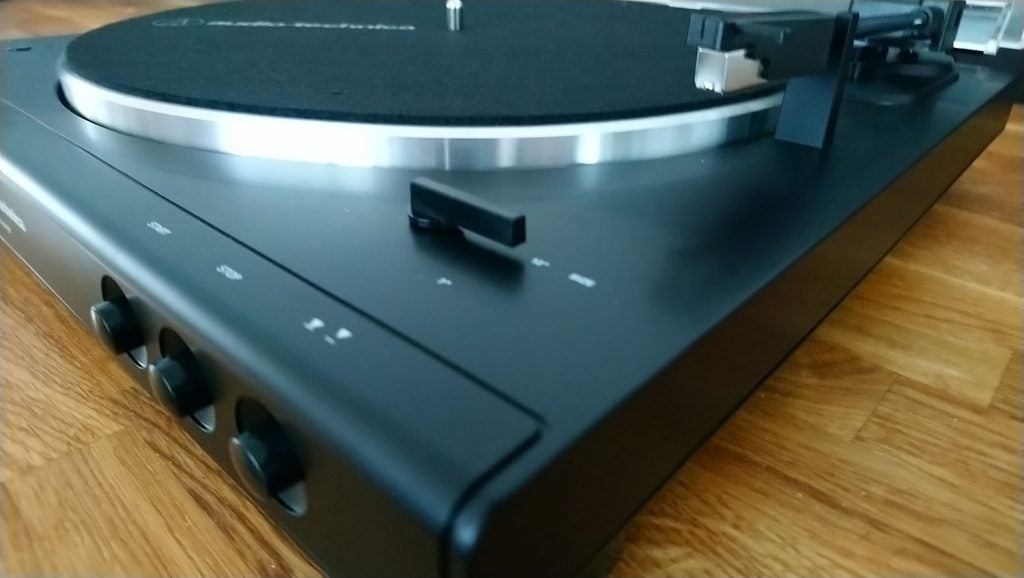 The bass frequencies firm up a little, the management of tempos becomes more convincing, and there’s a greater sense of unity and coherence. It’s still a little on the safe side, lacking punch and brilliance, but the AT-LP60XBT sounds more like a well-sorted budget turntable when listened to this way.

It helps that the integrated phono stage is worthwhile. It isn’t up to the standard of a decent off-board alternative costing, say, £70-£100, but then the AT-LP60XBT puts convenience above outright performance. It’s perfectly acceptable in an appropriate system.

Want to get back into vinyl after giving it up? Or want to get into vinyl for the very first time? Want a bit of that big-format, big-sound cachet without the faffing about that turntable ownership normally requires? Then you should think hard about the AT-LP60XBT.

It isn’t the most substantial-feeling or -sounding turntable this sort of money can buy – for £150, Pro-Ject’s Primary E deck will get you more of both. But it won’t buy you wireless connectivity of any type, let alone aptX. If you want to get a heftier turntable that will do what the AT-LP60XBT can do, you’re looking at Pro-Ject’s Essential III BT – but that costs £320. Plus, the Pro-Ject streams Bluetooth 3.0 – a standard that’s almost as old as vinyl itself.

As I said at the start of this review, the old AT-LP60BT had an area of the market all to itself, and that’s equally true of the new AT-LP60XBT. The improvements in tracking and resonance-rejection that Audio-Technica claims are worthy enough, but it’s the adoption of aptX Bluetooth that really seals the deal.

The AT-LP60 XBT offers a fair bit of vinyl’s charms without breaking the bank, or having to rewire your entire system.