The ATH-CKS5TW's spec sheet puts them in the same area as the Cambridge Audio Melomania 1, which are cheaper and offer better balanced sound tonally. But, if you want a big sound with plenty of bass then the ATH-CKS5TW have it in spades – and at £149, they’re not hugely expensive. They just lack a killer feature to mark themselves out from their rivals

2019 was the year the true wireless earbud emerged in a big way. It reached the point where every month brought the announcement of a new model looking to take advantage of the growing headphone market.

One such brand was Audio-Technica, which announced two headphones at IFA 2019: the ATH-CK3TW and ATH-CKS5TW. Of the two, the CKS5TW has the better feature set and commands a higher price (a third, called ATH-ANC300TW offers noise-cancelling tech).

So with more choice available in the true wireless market, what do the Audio-Technica ATH-CKS5TWs bring to the table?

The ATH-CKS5TW (to call them by their somewhat wordy model number), were announced at IFA 2019 and went on sale not long afterwards for £149/$149/€159/CAD$239/AUD$249. That places them squarely in the mid-range area of the true wireless market.

Prices for the earbuds have since fallen to around the £115 mark.

Despite the promotional material making them look quite sizeable, the ATH-CKS5TW are fairly compact earbuds. The way they’ve been moulded, especially the rounded edge, gives them a look that’s misleadingly bulky.

Unlike some other wireless earbuds, the shape and fit provides no indication that they’ll slip out during use. The addition of winged-ear tips ensures a more secure fit and also means they sit comfortably in the ear. An added benefit of this stability is the seal they produce once in the ear, warding off external noise and helping to maximise audio performance. 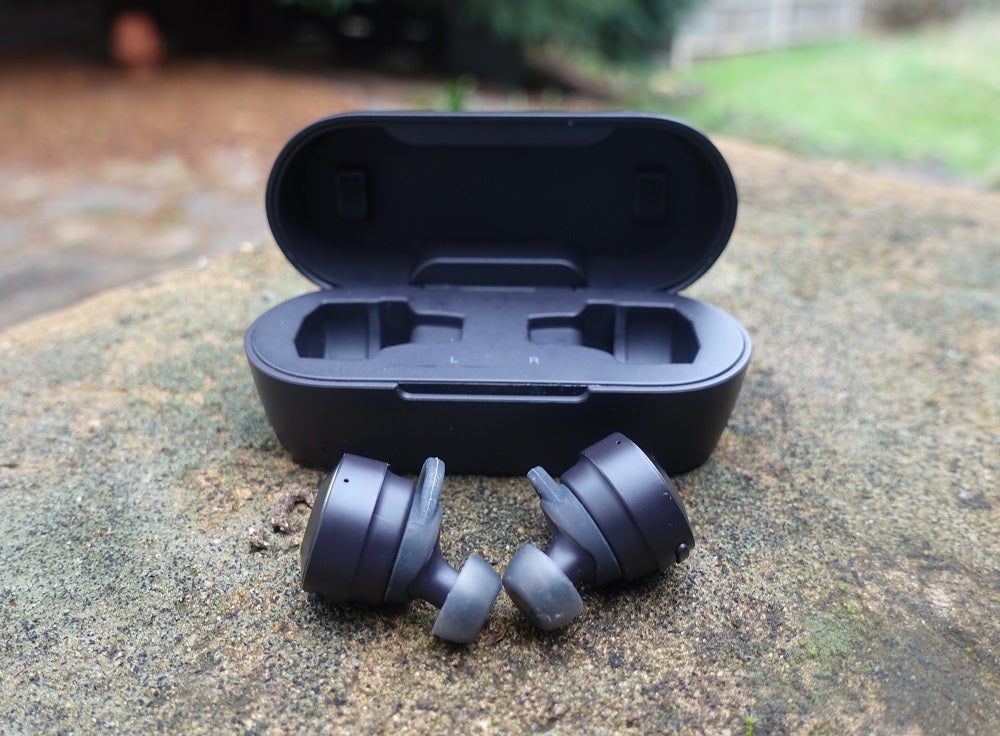 The CKS5TW have eschewed touch controls in favour of physical buttons. These are located towards the top of the earbuds, but face out for easier access. The issue I have with physical buttons – and it’s a small one – is having to feel for where the button is. In the end, that’s trumped by the tactile feel of every button-push hitting its mark.

The button on the left earbud is purely for volume control. One press and it goes up; two quick presses brings it down. Playback and call controls are accessible on the right: two successive presses skips forward; three presses skips back a track. As long as you’re not overzealous with the button pushes, it all works well.

In terms of look, the ATH-CKS5TW are pragmatic to their core. There’s nothing particularly flash – and there’s a case to be made of the ATH-CKS5TW playing it safe.

Thankfully, the compact shape, good fit and physical buttons means the user experience is rock-solid. It’s an approach that avoids over-complication, especially since wireless earbuds can be hit and miss in this area, with some haphazard implementation of touch controls.

The ATH-CKS5TW don’t include noise-cancellation, but the quality of the seal is effective enough.

Nevertheless, the spec sheet for the ATH-CKS5TW is fairly impressive. Battery life is 15 hours, far and above the 8-to-10 hours touted as industry standard, and ensures they’ll last a couple of days in the wild.

And if that wasn’t enough, a further two charges are stored in the case, totting up to 45 hours in total. 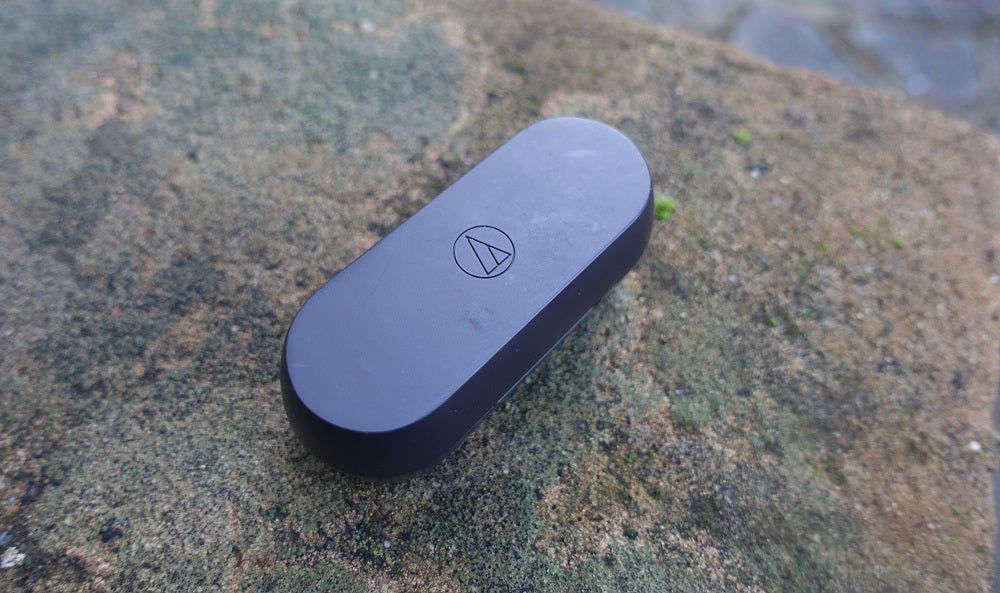 The charging case shares the same pragmatic aesthetic as the earbuds, with the Audio-Technica logo the only noticeable branding. It isn’t as tall as other charging cases, but it’s slightly longer and should fit easily into most pockets.

On the bottom left side are three tiny LED lights that indicate charging status. Charging time for the earbuds themselves is two hours, and three hours for a fully charged case via USB-C charging.

Bluetooth 5.0 is supported, as is the high-quality aptX codec along with AAC and SBC. Bluetooth distance is quoted as 10m, which feels about right. Plus, the strength of the wireless connectivity has always been strong, with few noticeable or irritating dropouts encountered. 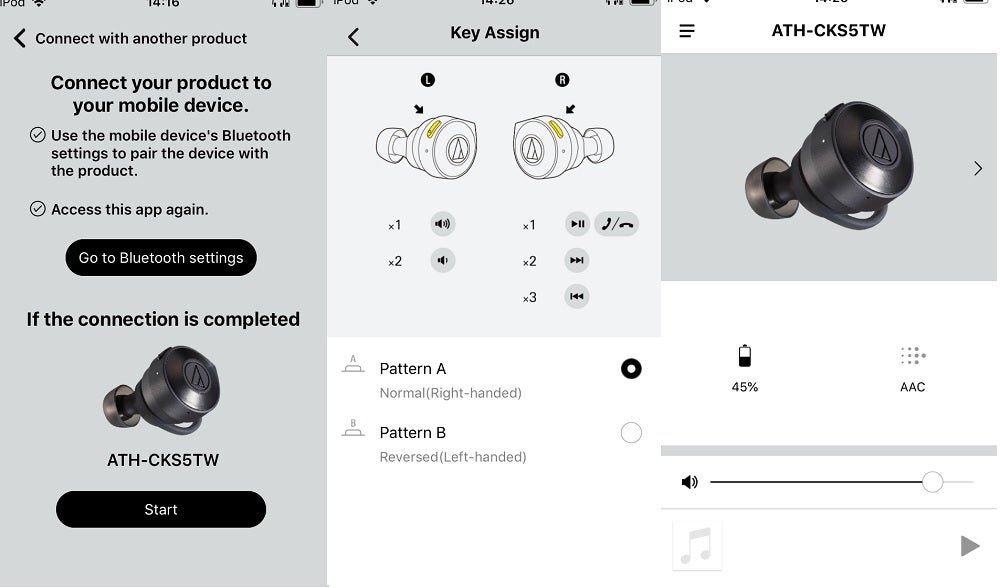 Setup of the wireless earbuds is done through the fairly prosaic Audio-Technica Connect app. This offers access to locating the ATH-CKS5TWs if they end up lost (Product Locator must be set to “always on” for most effective results).

The app also allows button placements to be customised – but this simply amounts to reversing the layout for left-handed users. Otherwise, the app displays the user battery life, Bluetooth transmission and a volume slider.

Audio-Technica wasn’t kidding when it said the ATH-CKS5TW offers powerful bass. That has to be down to the inclusion of 10mm driver in each earbud. However, this choice does have a knock-on effect on overall sound quality.

The most prominent characteristic of the ATH-CKS5TW is its soundstage. While it’s wide, it’s fairly thick too, producing a big and hefty sound – although it shaves a bit of detail off in the process. 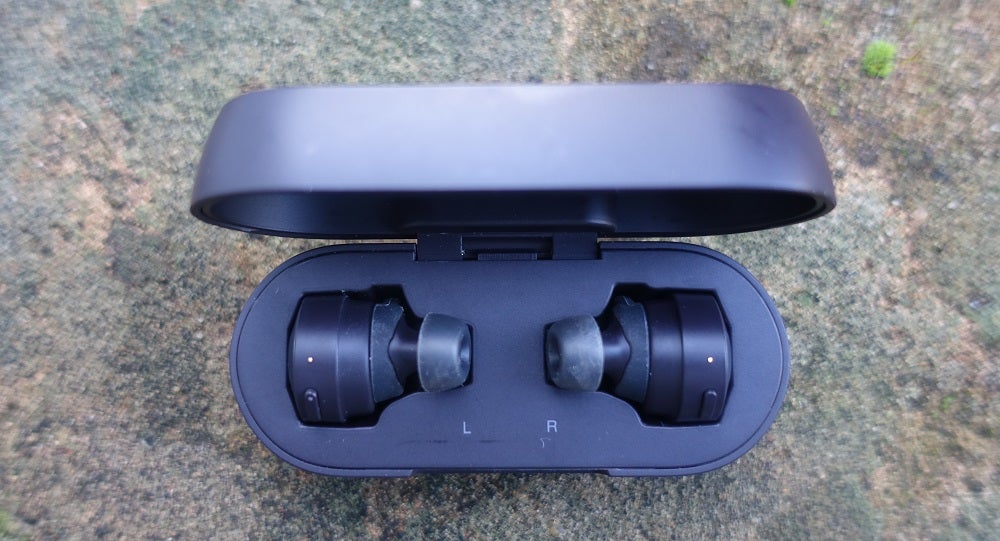 It’s a presentation that I’ve found slightly difficult to get a handle on. They’re not muddy or particularly warm sounding, but neither are they the clearest-sounding pair of earbuds either. Mid-range and treble remain distinct from the bass, though, but the bass-boost – if you want to call it that – has greater room to play in. However, what the ATH-CKS5TW lack in terms of articulation and clarity, they at least avoid the soft and murky sound of the Amazon Echo Buds.

That thicker sound is very apparent with a play of Solar Bears’ Cosmic Runner. When the bass kicks in it’s in a big way, trumping the amount of bass summoned by the Sony WF-1000XM3, for example. 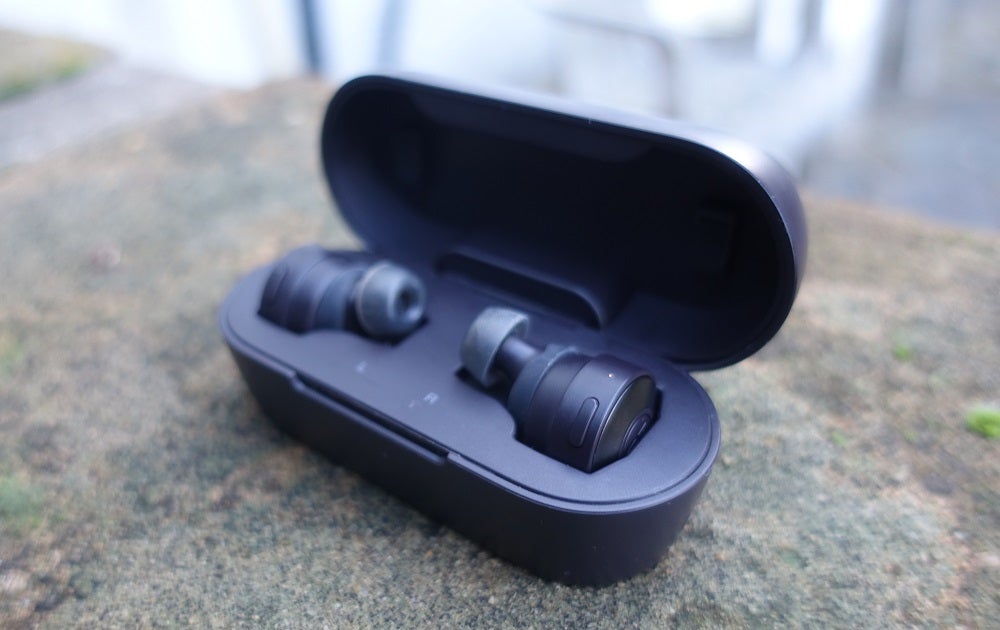 However, with all that bass they don’t sound as sharp in terms of timing, which is evident in a track such as The Landing from the First Man soundtrack. There’s a size to the sound that outguns others at this price, but ATH-CKS5TW aren’t as informative.

Despite that, they’re still reasonably confident sounding in the mid-range and treble. The vocals of Alicia Keys in Heartburn from her album The Diary of Alicia Keys aren’t masked by the power and bass on show. 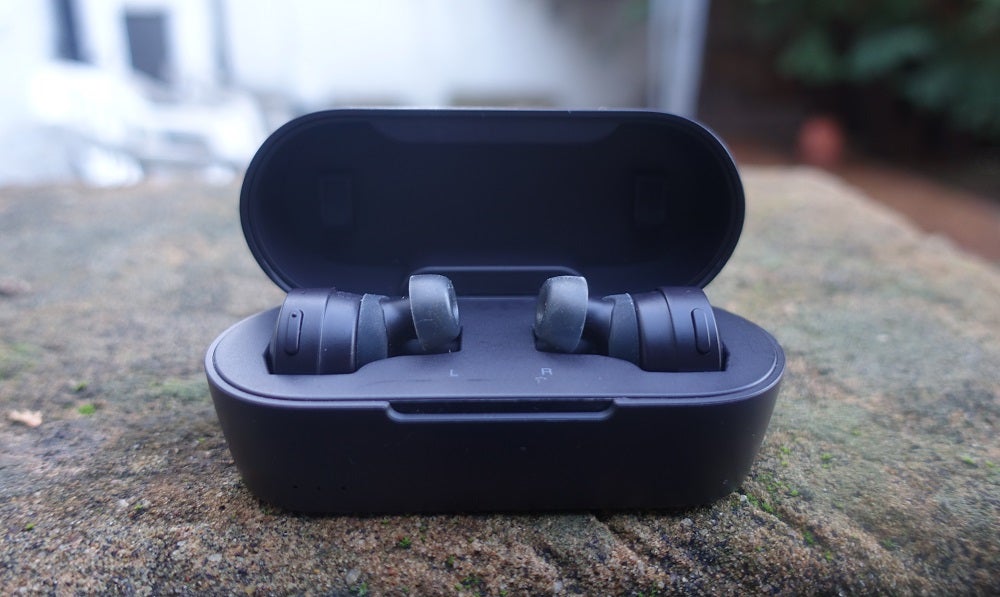 Streaming Miles Davis’ Kind of Blue on Tidal, and while the double bass in Blue in Green has a heft to it, the piano and Davis’ trumpet make their presence felt, adding to the song’s somewhat mournful character. It does highlight the lack of detail in some aspects, with the drums in the track fluttering almost imperceptibly on the edges.

You can pick out where instruments are within the soundstage with the ATH-CKS5TW displaying a fair sense of organisation, even if their smooth character does zap a bit of energy. While some songs can soar with a sense of scale, there isn’t quite that same sense of excitement.

You should buy the Audio Technica ATH-CKS5TW if…

If you’re after sufficient bass to go with your tracks, the ATH-CKS5TW bring plenty of it.

The physical controls are welcome if you’re someone who likes feel of actual buttons over touch controls.

With the 15 hours in the earbuds and 45 hours in total, the Audio-Technica pack in plenty of endurance.

You shouldn’t buy the Audio Technica ATH-CKS5TW if…

The spec sheet of the ATH-CKS5TW puts them in the same area as the Cambridge Audio Melomania 1, and the latter strike a better tonal balance.

These earbuds aren’t clearest or most dynamic, and there are some cheaper alternatives that perform better in these respects.