What are the Audio-Technica ATH-CKR10?

The Audio-Technica ATH-CKR10 are earphones that do something extraordinary. Not only do they offer up super-powerful bass, but they combine it with sound quality that is sure to make many audio freaks weak at the knees.

At £230, these in-ears are easy to recommend to any bass fans looking for their way into the earphone big leagues.

So if they make an attractive proposition for just about everyone, why haven’t they been award a 9 or 10/10? Well, a bit too much winter weight around the mid-bass area convinced me that Audio-Technica can and will do better. 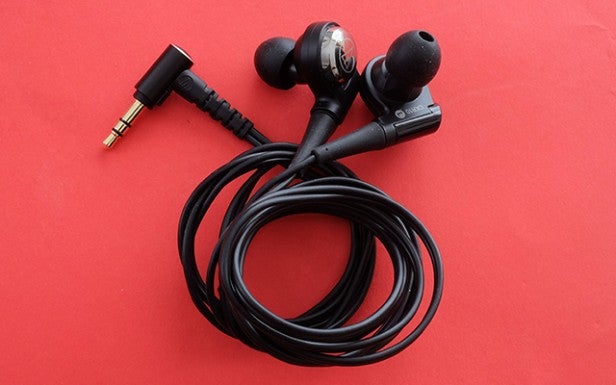 The sheer power behind these earphones doesn’t come from nowhere. The Audio-Technica ATH-CKR10 are the first in-ear headphones to use push-pull dual-phase driver technology.

What this means is that they can actively control the backwards movement of the headphone driver while also pushing it out. A lack of control over the motion of the driver is why lesser bass headphones end up sounding flabby.

Audio-Technica hasn’t held back with the drivers it’s used, either. Two 13mm drivers sit in each earpiece, facing one other. Not only are these considered “large” by any standard, it’s the first time I’ve seen multiple giant dynamic drivers in an earphone. 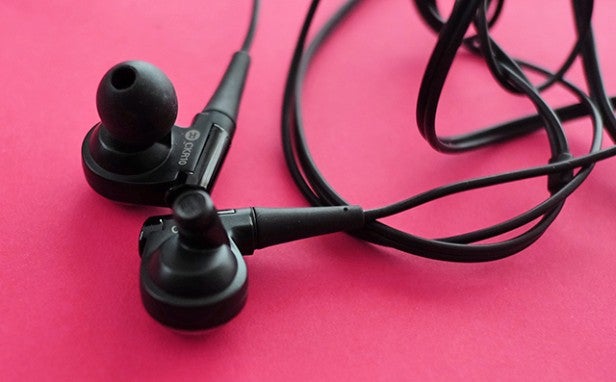 Usually, multi-driver earphones almost certainly will use small, balanced armature drivers – or a mix of those plus a single dynamic driver. Look at the Audio-Technica ATH-CKR10 earpieces, though, and that construction makes sense. Not small, are they?

The closest design to these we’ve seen in the past are the Sony XBA-Z5s. They team-up a gigantic 16mm driver with a pair of higher-frequency units – and cost twice the price of the Audio-Technica ATH-CKR10s.

For all their bulk, the Audio Technica ATH-CKR10 aren’t fiddly to fit in your ears. They’re worn in standard fashion – with the cable running straight down from your ears, rather than snaking over them – and I found that placing them in the ear with the right tips maintains a good seal. 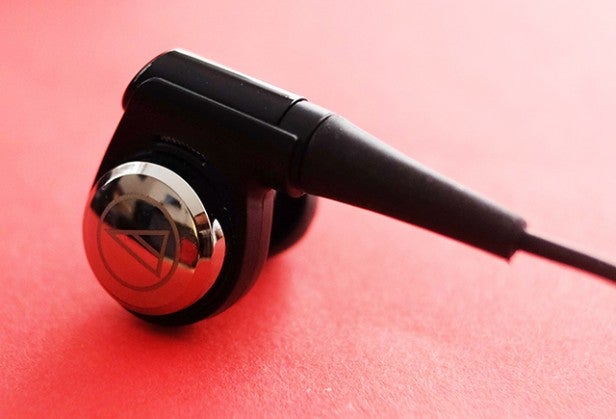 I imagine this is helped by the small port on the side of each earpiece – although, contrary to what you’d expect from ported headphones, I did notice some diaphragm crackle noise on inserting the Audio-Technica ATH-CKR10 with extra pressure.

Aside from this quibble, however, the Audio-Technica ATH-CKR10s feel very well made. Although parts of the earphones are made from plastic, it’s of the high-grade variety, and the back of each earpiece is a cap of titanium. 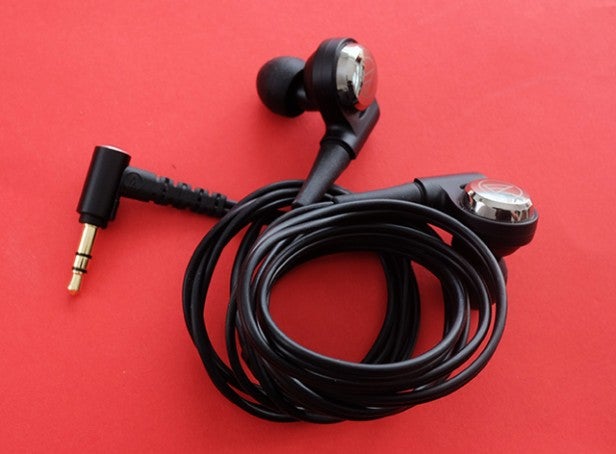 The cable is non-removable, however, which raises concerns over their longevity if the it were to become damaged. They also lack an in-line remote, although it’s possible that a variant with the feature will eventually appear.

In day-to-day use the only other concern is that the cable makes a rustly sound. While the seemingly ported design may give the impression that isolation won’t be a strength, the Audio-Technica ATH-CKR10 earphones tackle most ambient noise with aplomb.

You may think that the in-out phase driver array of the Audio-Technica ATH-CKR10 will turn out to be a gimmick – but judging by the sound, it isn’t. They offer up some of the best high-intensity bass you’ll hear in any in-ear monitor, regardless of price.

Its depth and power at low frequencies is easily class-leading. I compared the Audio-Technica ATH-CRK10 with the fairly powerful Sennheiser IE 80 earphones and found that the CKR10s made them sound a little lacking. 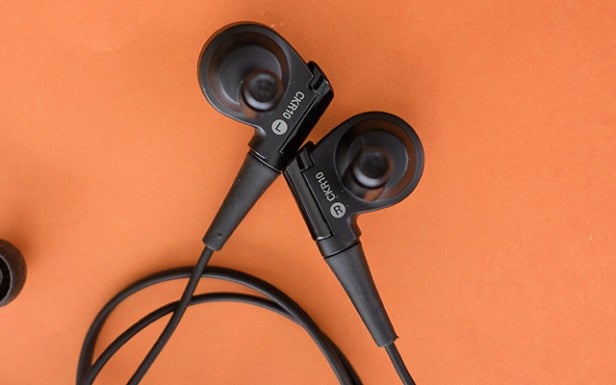 The Audio Technica ATH-CKR10 are lots of fun, and deliver the kind of bass slam that many people assume in-ear headphones aren’t capable of.

Just as impressive is the fact that this bass power doesn’t trample over everything. I’d describe it as emphasised, rather than dominating. And there are plenty of high-end headphones that have plenty of bass power – the £10,000 Sennheiser Orpheus, for example.

Treble detail is excellent too, with an even smoother finish than the Sennheiser IE 80 we compared them to earlier.

The Audio Technica ATH-CKR10 present a huge “surround sound”-style soundstage that’s both wide and tall. This enables the earphones to give the impression that they’re delivering well-separated, 3D-style sound, even though they lack the characteristics of lightness and ultra-tasteful reserve that might normally be seen as necessary for that sort of compliment. 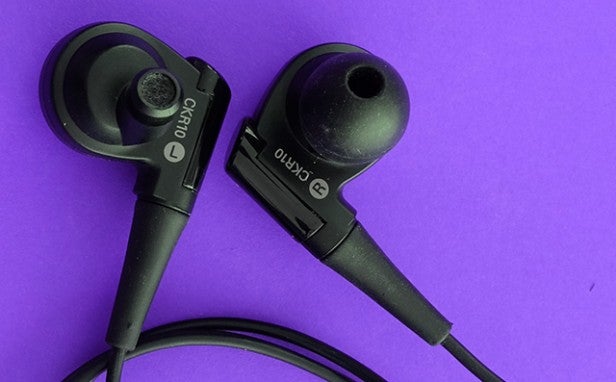 So the Audio-Technica ATH-CKR10s are great earphones – but there is an issue. The lower mid-range to mid-bass is quite thick. While the mids are generally excellent, with superb tone, presence and detail/texture, it can sound as though there’s an extra bit of mid-bass fudge attached to vocals in particular.

This holds back the sound, limiting the otherwise excellent separation. As a result of this, be sure you give the Audio-Technica ATH-CKR10s a good burn-in period before deciding to ditch them. We found the sonic fudge issue became better after a 30-hour burn-in. 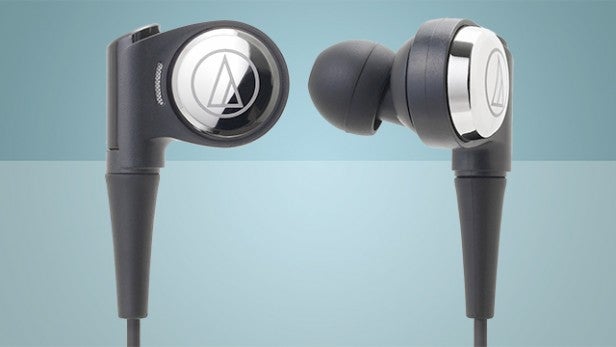 Should you buy the Audio-Technica ATH-CKR10?

If you’re after a huge, involving sound, then the Audio Technica ATH-CKR10 are some of the very best earphones you can get at the price – or for under £400.

They have more low-end power and expression than rivals from Shure, Sennheiser and Etymotic. In fact, I’d say that their sound signature is actually closer to higher-end earphones such as the £800 Shure SE846 and £1,000 AKG K3003.

However, an issue with mid-bass bloat lets the sound down a little.

I’m super-impressed with the Audio-Technica ATH-CKR10 earphones. However, I can’t get over the feeling that the company’s best push-pull driver earphones are still in the future.

Not perfect, but these earphones set a new standard for high-quality bass.