I’ll be straight with you: much as I like some in-ear headphones, given the choice between listening to a set of IEMs and a pair of proper, full-sized cans, I’d choose the latter every time. However, there are times when that choice isn’t really a choice at all. When you’re travelling, for example, it’s just a non-starter. Sure, you could take your open-back Grado SR-80s or your Sennheiser HD595s on the train, but sound leaks out like crazy and – worse – sound leaks in.


This means you turn the headphones up even louder, and you’re generously sharing your taste in music with every poor soul in the vicinity. Closed-back headphones often do a better job of keeping the sound inside the headphones and attenuating outside noise, but the ones I like best – like BeyerDynamic’s DT770s – tend to be too large for use on the move. In the end, a set of IEMs is the solid, practical choice. 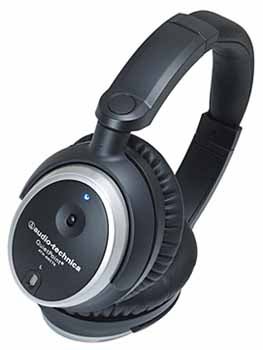 There is a third option, however: active noise-cancelling headphones like the Audio-Technica ATH-ANC7b we’re looking at today. Rather than relying on the physical construction of the headphones to shield the ear from noise, they use a built-in microphone or microphones to sample the external racket, then an integrated processor creates an equal but opposite noise which, added to the signal, cancels it out. It’s an approach that has been used with considerably success by Sennheiser with its NoiseGard line and Bose with its QuietComfort series. AudioTechnica’s QuietPoint range hasn’t been quite so prominent over here, but that’s a situation the Japanese audio specialist hopes will change with this new and improved model, which won an Innovations award at this year’s CES. 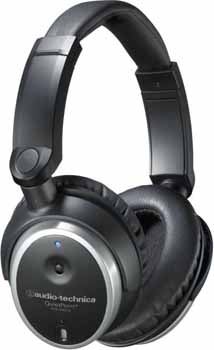 As they’re designed primarily for travel use, noise-cancelling headphones need to be compact, and the ATH-ANC7b setup is about as compact as a pair of circumaural (over the ear) cans can get. With the cups twisted downwards they fit into a square-ish rigid carrying case measuring approximately 20 x 21cm and 5.5cm deep. This takes up a spare bit of room in your backpack or hand-luggage, but at just under 500g the weight isn’t extravagant, and there’s enough spare room to cram in your PMP or MP3 player too, provided it’s around the same size as or smaller than an iPod touch.


Supplied accessories include a 6.3mm plug adaptor, airline adaptor and Velcro-ed in accessory pouch plus – as the cable is plugged rather than hard-wired in – a choice of two cables, measuring either 1m or 1.6m. Sometimes you need that extra length when using headphones with a Hi-Fi, TV or PC, but you don’t want to have to drag all that cable around when you’re listening to your PMP on the bus. This setup makes a lot of sense.

In fact, the design as a whole works brilliantly. I suspect that people with larger ears might find the pads impinging on their earlobes, but I found the ATH-ANC7bs a very comfortable fit, with the single extending metal headband maintaining a secure grip on the head, and the pivoting joints offering enough flexibility to cope with a range of different head shapes. The ear-cups are generously padded, but not mobile ear-saunas, as some closed-back headphones can become. At around 200g the headphones don’t feel at all heavy, and I could happily wear them for three or four hours at a time without any issues with skull-ache or sweaty ears. I wouldn’t have any concerns about taking the ATH-ANC7bs on a transatlantic flight. 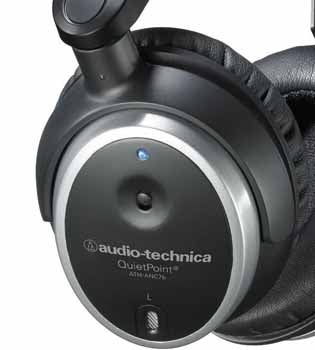 The headphones are powered by a single AAA battery, which hides beneath a swivelling cover on the right ear-cup, while you can switch the noise-cancelling effect on and off using a switch on the left. Up to a point, the noise cancelling works even without any music playing through – you can remove the cable altogether if you like – and the headphones will work in passive mode even should the battery run down, though to be honest the drop in volume level is significant enough to make this little more than a last-ditch measure. Hopefully, it’s not one you’ll have to take. Audio-Technica rates the battery life at approximately 40 hours, and I certainly failed to run it down over two four-hour train trips, a three-hour flight and a few hours of listening in-between.


First the good news: the noise cancelling effect is very good. During the flights I had the misfortune to be parked right behind the wing, and with noise-cancelling switched off there was precious little chance of hearing anything worth listening to even with my source switched up to full. Admittedly, this wasn’t totally the fault of the noise level or the isolating characteristics of the physical design. The ATH-ANC7bs have a high impedance of 300 ohms, making them difficult to drive without the amplification provided when you flick the switch to on. With said switch duly flicked, the situation was very different. 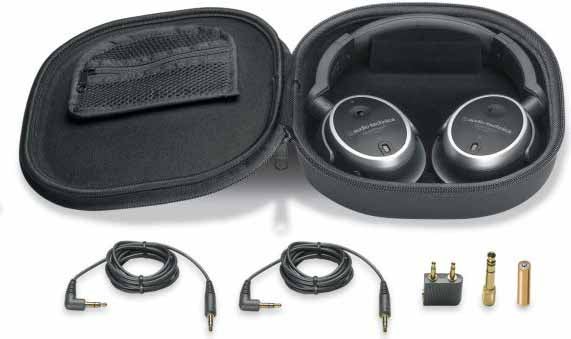 The jet noise was mostly cancelled out, and while some vestigial rumble and outside chatter came through, it was reduced to a very manageable, quiet background hum. In fact, I was able to listen to quiet orchestral passages from Wagner’s Tristan and Isolde without any difficulty – always a good sign. Well-fitted IEMs might give you slightly more isolation, but not much, and I’d put the ATH-ANC7bs right up there with similar models I’ve tried from Sennheiser and Bose (though to be fair I’ve never given either brand the same sort of rigorous real-world testing).

The (slightly) bad news is that the ATH-ANC7bs aren’t quite as effective at keeping sound in. With the noise-cancelling on there’s less need to put the volume level high, but even so I was aware, with the headphones off and the cups pressed together, that some sound was leaking out. On a noisy jet the impact was minimal, but on the train I was all too aware that, say, the high soprano sections in Wagner’s opera were leaking out and netting me some really odd looks. I had to quickly switch to the new Massive Attack album to keep what tiny bit remains of my street-cred alive. 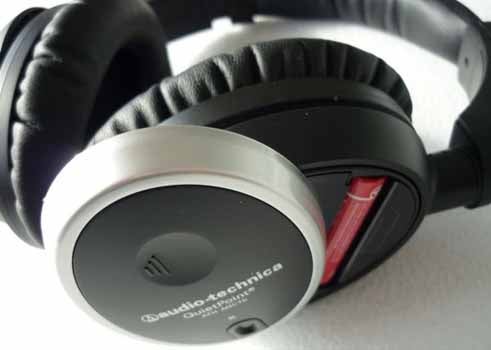 Sound quality, meanwhile, is good but not quite what I’d hope for from the company behind the ATH-AD series open-backed and ATH-A series closed-back headphones. On the plus side, there’s plenty of low-end grunt and a nice, warm mid-range; both qualities that suit rhythm-heavy tracks from Massive Attack or weighty, power-chord rock from AC/DC or Muse. The sound is also a little more spacious sound than I’d expect from closed-back headphones, and detail at the top-end is far from bad. However, the mid-range can sound crowded and imprecise, and the overall level of clarity isn’t up to AT’s usual standards of excellence.


Don’t get me wrong: the ATH-ANC7bs still sounded better to my ears than the vast majority of similarly-priced IEMs I’ve stuffed inside them, but in comparison to several conventional pairs available for under £100, they fall slightly short. To be fair, this criticism isn’t limited to the ATH-ANC7bs, and while the Audio-Technicas can’t match Sennheiser’s more expensive PXC 450s for clarity, they’re stronger at the bass end than most noise-cancelling headphones out there.


In their defence, I should also mention that the ATH-ANC7bs did a brilliant job with film soundtracks, giving me the gun battles and explosions of Die Hard 4.0 from my PSP Go with boom and bluster to spare. If you want to watch movies on the move, keep this in mind. 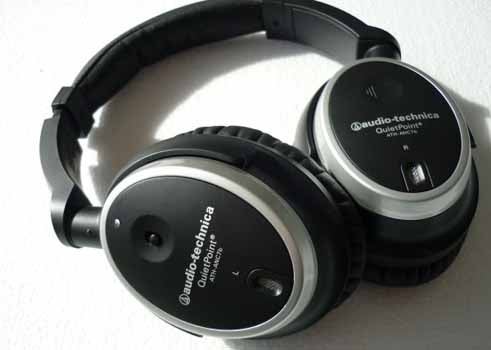 And here’s the thing. While, I have my reservations about sound quality, overall, I like the ATH-ANC7bs. The market for noise-cancelling headphones has become very competitive in the last few years, with Bose and Sennheiser fighting it out at the high-end, and Creative, JVC, Sony, Panasonic and others all scrapping for position just below. Luckily, Audio Technica’s babies can easily be found for under £130, and while the audio quality isn’t quite good enough to put them right at the top of any shortlist, their combination of comfort, decent sound and all-round practicality makes them worth including on it.


A solid, well-designed set of noise-cancelling headphones offering good noise-dampening and respectable sound quality at a reasonably affordable price. If Audio-Technica could improve on overall clarity with the next version, it could have a winner on its hands.